Keung is a champion kung-fu fighter, who has won many tournaments. His style or blend of styles is unclear, but it allows him to engage multiple opponents and prevail.

He is also highly acrobatic, and can be amazingly fast, hitting up to four nearby opponents before anybody can react.

His recuperative power is practically superhuman. Even if he’s bleeding all over with a messed-up arm in one scene, he will be fully healed by the next.

Like many Jackie Chan characters, Keung is not cinematically  devastating. For instance, several street toughs can be difficult for him to handle if they get the drop on him. He may hit fast, but he usually cannot knock somebody out in one blow. And while he may be able to take a lot of punches and kicks, but it obviously hurts and he’s definitely not bulletproof.

When faced with a number of opponents with street weapons (like bats) or worse, he will wisely flee and get chased rather than wade in. That is, unless he is on the warpath and willing to burn Hero Points .

Although he’s very muscular and can, for instance, do push-ups while maintaining a handstand, Keung is a lightweight compared to some of the heavies he runs into. Thus, he will often have to grab some suitable item to clobber opponents that would not be affected by his bare fists and sneaker-clad kicks.

Ah Keung is a Hong Kong kung-fu champion. Before his death his father was also a great kung-fu prize fighter. In 1995, Keung came to America to be at his uncle Bill’s wedding. Bill owned a convenience store and Chinese market in the Bronx.

Keung soon discovered that the area was the half-turf between two urban biker gangs. But within days his uncle had left for his honeymoon and sold the market to another Chinese-American retail manager, Elaine. Attempting to woo the pretty but authoritarian Elaine, Keung ended up volunteering to help her with the market while his uncle was away. 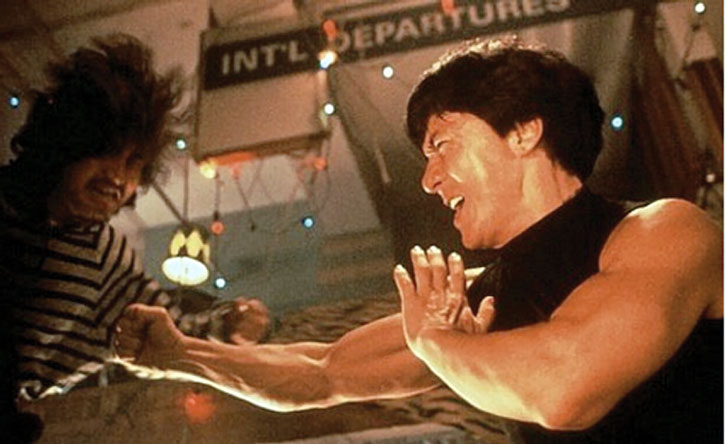 Within days, one of the gangs started causing trouble at the market. Keung got involved when Elaine was threatened – with unpleasant effects for both the gangsters and nearby piles of foodstuff. That very evening, the gang tried to get its revenge by ambushing Keung. They caught his attention by pretending to assault Nancy, one of their female members.

Poor Keung walked right into the trap and was badly wounded, with numerous cuts from exploding bottles batted at him by the thugs. By the next day they went after him again, but he managed to acrobatically escape from them, though he hurt his arm.

On a more positive note, Keung had become friend with his neighbour Danny, a young Chinese-American boy in a wheelchair. Danny was Nancy’s little brother, though he did not know that his sister’s ’job‘ was running with the gang.

While Keung accompanied Danny home, they witnessed the tail end of an altercation between a Jamaican criminal crew and a White mob. The syndicate types had double-crossed the islanders to steal the diamonds the Jamaicans wanted to sell them ; this resulted in several car crashes and copious gunfire.

Angelo, a member of the local biker gang, grabbed the diamonds from a crashed car, but immediatly had to hide them. He put the gems in Danny’s wheelchair cushion, since the wheelchair was laying unattended in the street after Keung carried Danny away to safety in his arms.

Keung eventually met with the beautiful Nancy and came to see her at one of her actual jobs, as an exotic dancer at a club. The gang’s leader, Tony, jumped to the conclusion that Nancy was having an affair with Keung, but they escaped – and had an affair. While the newly-formed couple away, Tony and his gang came to the market for revenge and wrecked everything.

Meanwhile, the crime syndicate determined that Tony’s gang was involved in the theft of the diamonds. They started killing off random gang members to make them talk.

Back from his night with Nancy Keung, furious to see the wrecked market and the effect it had on Elaine’s morale, had his lover take him to the gang’s hideout — where he smashed everything and everybody up. He then told them to change their lives, and that he would be a good neighbour for them if they did not make any more trouble.

At that point the syndicate send back the corpses of kidnapped gang members to persuade the gang to give them Angelo. Keung, Tony and Nancy banded together to repel the mob. They found Angelo, but Keung made a mistake. The syndicate’s enforcers had passed themselves off for FBI agents before, and Keung called them, thinking that they were real police.

After understanding his mistake, he took down two syndicate men and found the diamonds, which he hoped to trade for the safety of Nancy, Tony and the rest of their street gang. He contacted the syndicate leader, a man named White Tiger, to negotiate. 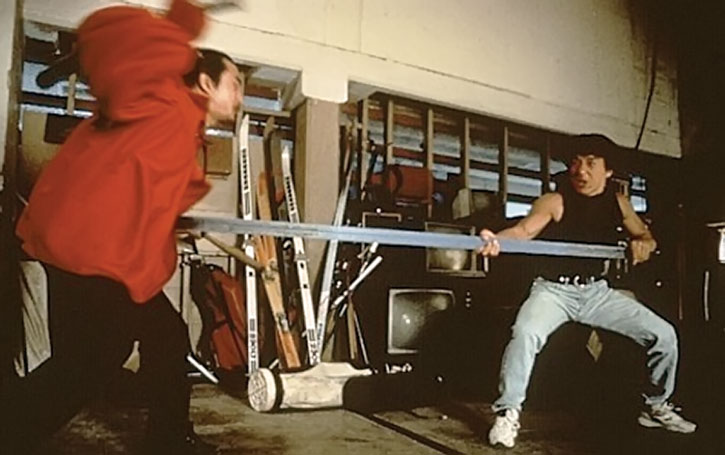 However, White Tiger did not cooperate, instead wrecking the market more thoroughly than ever, and telling Keung to just obey — or else.

Amidst a heavy police and FBI chase, the indefatigable Keung managed to cling on (and occasionally off) the hovercraft until he stopped it ; the syndicate men were arrested and White Tiger later fell into a police trap.

By the very end of the movie, Keung seems to be a very good terms with the NYPD and to actually have deputized or otherwise authorized to act among police officers. It is not impossible that he later went through police academy and became a policeman after his adventure, though he more likely returned to Hong Kong when his uncle came back from his honeymoon.

Keung is a very nice and very polite man, who likes children, giving presents and helping his family. He’s very laid-back and usually smiling. He has a pretty strong Hong Kong accent, and early on tended to be a bit clumsy and disoriented due to the many differences between his native Hong Kong and New York City.

Ah Keung is a very moral man with a strong Confucianist slant ; he will encourage gang members and the like to be dutiful toward their parents and families and have honest, productive lives. He does not nurse grudges (since they disrupt social harmony), and will call upon his ancestors (chiefly his father) to protect him when he’s afraid.

(Looking at his new neighbourhood) “Wow, looks like a really tough area.”

(Challenging the gang leader to a fight) “If you got the guts, drop the gun.”

(Leaving the gang hideout he just thrashed) “I hope next time we meet, we will be drinking tea.”

“Don’t let the situation change you. Change it.”

“Don’t ever make trouble [at the market]. Or I’ll beat you up each time.” (beat, the gang members start leaving the shop) “Careful, mind the step.”

Characters with multiple levels in the Martial Artist Subskills can only do one substitution per Phase, as per normal Martial Artist usage. The Subskills are listed individuall since they have different AP levels.

In this movie (as with many other Jackie Chan movies), most thugs have up to 5 (for nameless guys) or 10 (for named guys) HPs, which they will use on Last Ditch Defense almost exclusively. It generally takes several good punches and kicks, even by a strong person, to take somebody down.

Like several other Chan characters, Keung has the Make Do Equipment (Weaponry) Schtick — when using random items for offensive and defense purpose in melee, he does so without any penalty for cumbersomeness.

In fact, the GM may even award 1-5 HPs to Keung for particularly creative or spectacular use of random nearby items in combat. 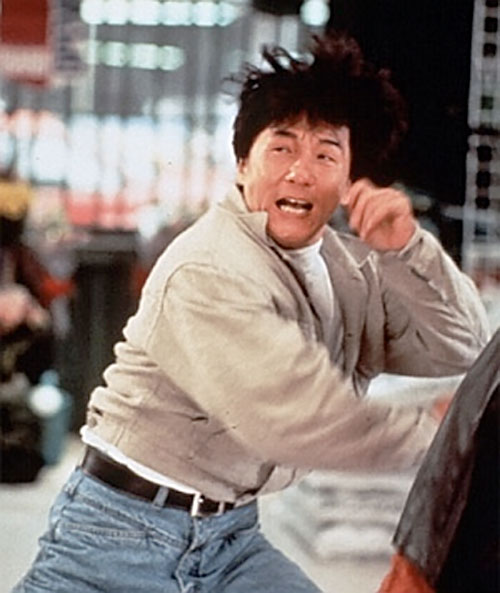 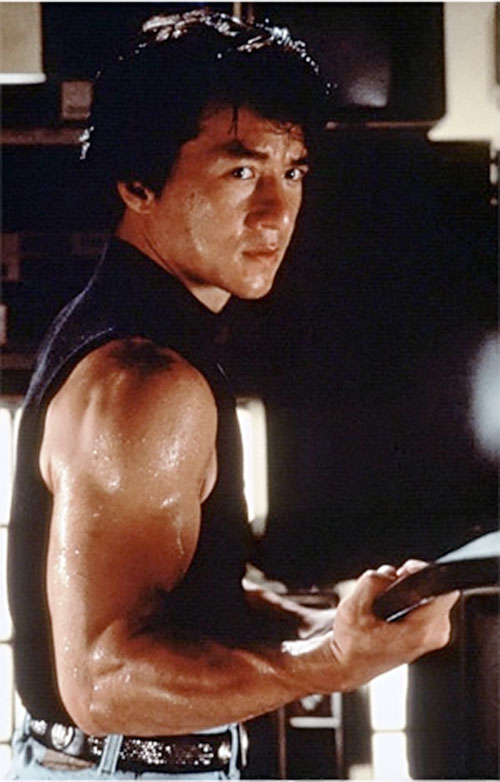 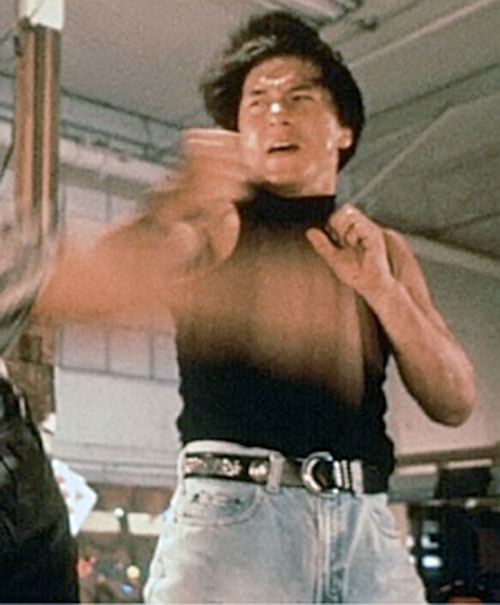 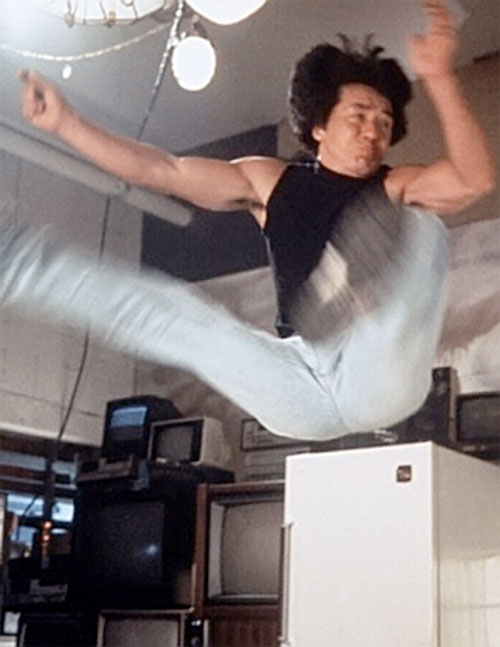 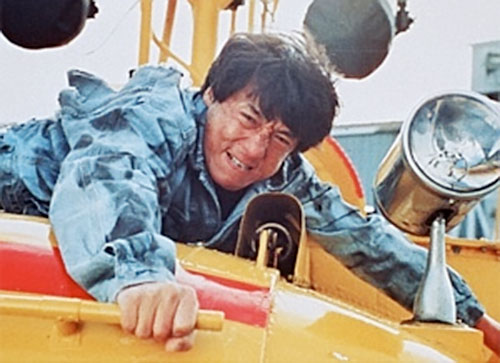