At some point Jade Cobra became part of the group known as Strikeback. Strikeback is a mutual defence agreement among a few costumed adventurers operating in the New York area.

When Nikita was kidnapped by mercenaries working for her father, Rascal contacted the rest of Strikeback. They hastened to support him in his hunt. They caught up to him at a local warehouse used as a staging ground by the mercenaries, where Rascal and Midnight Devil, to whom Jade took an instant dislike, battled a small army of thugs.

During the chaos of the fight, Midnight Devil and Jade Cobra spotted some mercenaries loading Nikita onto one of their ships. The pair managed to leap on board before it took off.

Misinterpreting one of Midnight Devil’s quips to mean that he could fly the vehicle, Jade Cobra proceeded to kill the mercenaries, only to learn they no longer had a pilot. The plane came down near the Grand Canyon, with Doberman and some of his more loyal mercenaries soon catching up to them.

They fought the mercenaries, but were soon overwhelmed, and taken to Dragonryder Island.

She awoke in a medical wing of the complex, soon dealing with the staff and began searching for Nikita. She found her unconscious and strapped to some device, with Midnight Devil speaking to Mars Dragonryder nearby, having obviously betrayed them, as Jade had expected.

Before she could act, however, she was discovered by a group of drunk mercenaries. These were angry at her killing one of their colleagues.

The rest of Strikeback arrived soon after. Their attack put the base on alert. It also accidentally turned off the barriers which prevented Monster X, the creature which had forced the Dragonryders from their home dimension, from breaking through. Monster X soon began rampaging through the complex.

Jade reached the rest of the team. She attacked Midnight Devil while Rascal attacked Mars. Yet Jade reluctantly stopped when it was revealed that Nikita had willingly allowed herself to be operated on, to have suppressed memories restored.

After Strikeback and Dragonryder reluctantly agreed to a truce, they dealt with the accidentally released Monster X, but not before Strikeback member Sherman was, killed. The fighting done, Nikita announced that she’d be returning to her home dimension with her parents, to find out where she’d come from, but promising to return.

Aggressive and prickly, Jade Cobra is quick to take offence. She is also suspicious of those she doesn’t know, only really comfortable around (some) of her team mates. 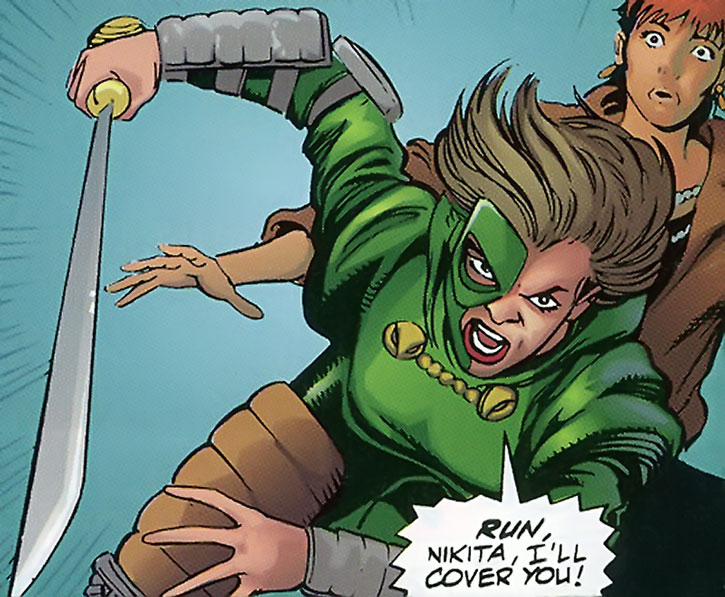 She’s especially sensitive about the scarring on the right side of her face, which she prefers to keep covered at all times.

Jade Cobra is also a ruthless combatant, having no qualms about resorting to killing her opponents. In fact, it seems to be her preferred option.

“I’ve finally failed in a mission. And I’ve let you and Rascal down ! I—I’m sorry, Nikita !” 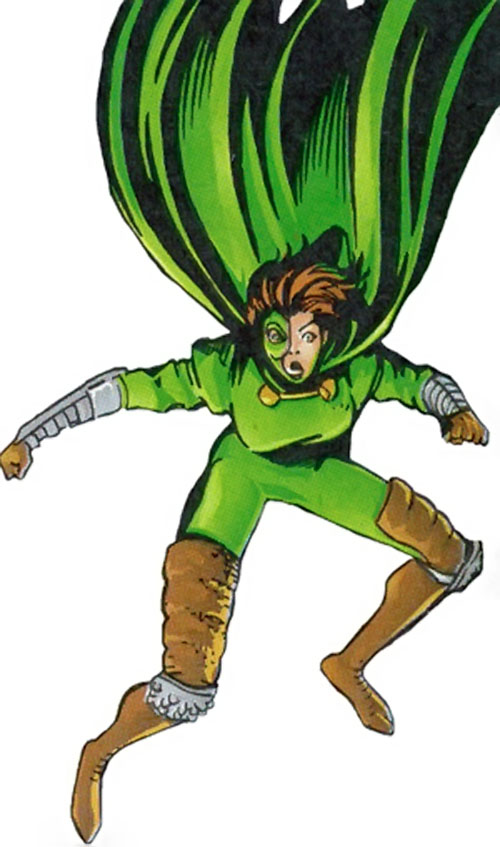