The 1990s attempt was under the !mpact imprint. It had a completely different version of the Jaguar, unlike the original Jaguar.

This capsule entry is chiefly intended to store a modified version of the stats. These were only published in very hard to find Mayfair material. The rest of the text is just a quick primer.

As the Jaguar, Maria possesses extraordinary physical speed, agility, strength and durability. In addition, her tracking abilities are unparalleled due to her augmented senses.

As Maria, she’s a brilliant student of mathematics. Her hobbies and skills include lace making and collecting butterflies.

During her youth, Maria lived with her aunt Luiza. Luiza secretly was a Brazilian jungle warrior and protector of the land. She oncetook Maria with her and performed a ritual. It was meant to channel certain mystical powers that passed down intermittently through the family line.

However, seeing Luiza turn into a werejaguar, Maria panicked and fled. Maria was found by her father who, believing that Luiza was badly caring for her, took her home. Maria has since studied maths and science, in order to avoid the merest hint of magic and mysticism.

Meanwhile, Luiza was becoming more and more predatory. She killed many government men in order to protect the rain forest. The Brazilian military finally caught up with her and killed her. But young Maria, who had been sent to study in the US the day before, inherited her powers.

She also received a costume as a last gift from Luiza. From there Maria discovered she could at will become the super-powerful Jaguar, a fierce, feral avenger of evil.

Maria Concepcion de Guzman is a shy and insecure young Brazilian girl. She has been given by her father the responsibility of someday inheriting and controlling the considerable de Guzman fortune. Consequently, despite her protests, she has been sent to study business and mathematics at Elm Harbor University in America. The poor girl is a stranger in a strange land.

The cool Maria finds herself excited by the fire that the Jaguar lights in her soul. She is enticed by the animalism her new alter ego [what is it with all that women/cat sexual symbolism ?]. Nevertheless, she has yet to find a satisfying balance between time spent as The Jaguar and time spent pursuing her academic studies.

Since becoming the Jaguar is exhausting, she must learn not to let her super-heroics affect her study habits. 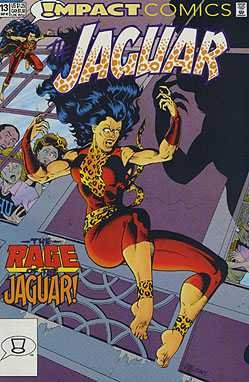