El Jaguar had catlike eyes that could see in the dark. He also seemed to have borderline superhuman strength, durability and speed. Lastly, he’s equipped with clawed climbing/fighting gloves.

Daredevil (Matthew Murdock) punched him a lot and threw him into practically everything across the room. Yet the only clear result was slowing El Jaguar down for a bit. He fared less well after a full-power Widow’s bite point blank to the face — but survived even this.

El Jaguar was leading an elite cadre of Hydra agents, called the Bravo Commando. They had jetpacks and submachineguns , and some had a knockout gas rifle.

Ramon de Rico was apparently Spanish. He was genetically enhanced by HYDRA to have the proportionate strength and agility of a feline.

After Nick Fury destroyed HYDRA and Baron Strucker with their own Spore Bomb, the dreaded terrorist organization laid shattered for years. Various players tried to revive it, including surviving HYDRA agents. Several of these proclaimed themselves Supreme Hydra, but some simply headed factions and cliques.

Some such factions degenerated and fell under the control of insane criminals or organised crime. In particular, a faction on the U.S. East Coast made Maggia don Silvio “Silvermane” Manfredi its new Supreme Hydra. It then concentrated its operations on New York City.

Knowing that he would soon oppose powerful interests and superhumans, Silvermane recruited costumed criminals as chiefs for his reorganized HYDRA splinter arm. Those were :

However, Silvermane was overconfident. He tried to kill the candidates for the board of directors of S.H.I.E.L.D.. His HYDRA splinter was swiftly taken out by S.H.I.E.L.D., Nick Fury, Daredevil and the Black Widow.

El Jaguar managed to blindside and knock out the Widow, then battle Daredevil to a standstill. But the had to flee when S.H.I.E.L.D. arrived.

When Daredevil and the Widow attacked the base of Silvermane’s HYDRA, the Widow engaged him solo. He nearly killed her, but she took him out with a blast in the face.

He recovered, but was in no shape to put up a fight. El Jaguar, Blackwing and Man-Killer where captured by S.H.I.E.L.D. troops led by Dum-Dum Dugan.It is possible that de Rico then spent years in S.H.I.E.L.D. custody.

In a bar with no name

In 1986 El Jaguar was at the Bar With No Name, discussing with Commander Kraken how HYDRA had become too conservative for a man like him. But the Scourge of the Underworld opened fire with two special .50 machineguns, killing everyone in the bar.

Given the endurance he displayed previously, his hazy superhuman abilities, and the propensity of feral characters in the Marvel Universe to have healing factors , it is *possible* that el Jaguar could come back. À la Norman Osborn.

He seems very proud to be the leader of a crack unit, and quite protective — paternalistic, in fact — toward his soldados. El Jaguar doesn’t quite lead his men. He stealthily tags along with them and let them do their thing. But he’ll spring in when they encounter potentially dangerous resistance.

El Jaguar prefers to make indirect and dramatic entrances. A typical example is climbing outside a building and barging in through the window. But he becomes very straightforward once in combat. He just kept pouncing at Daredevil, slashing him and refusing to stay down.

“¡ Bruja ! You would use your hellish device on these compañeros of… El Jaguar ! Little fool ! As leader of HYDRA’s Bravos Commandos, I am like the faithful shepherd that watches over his own flock !”

“Daredevil was my afortunado, o Supreme One. He shall not escape el Jaguar a second time !”

“El Jaguar does not fear death ! He deals it !”

Bonuses and Limitations:
Ultra-vision only to see in the dark (-1).

Equipment:
CLAWED GAUNTLETS [BODY 06, Claws: 06, Bonus: Diminishes the OV/RV of most Climbing checks by one CS].

He keeps his HPs for LDD (not a bad tactic given his Conditional Soaking Advantage), further enhancing his remarkable resilience.

His military skills and the Iron Nerves in the game stats are speculative. But then this guy only appeared once.

These are HYDRA agents wearing jetpacks and carrying special weapons. In some respects, this unit seems to be a predecessor of Horst Eisele’s commando, though they are certainly not as well-trained and equipped.

Against opponents who only have blunt attacks, the Jaguar’s Average PL rises to 8.6 due to his Protection.

The Bravo Commando working alongside him are ordinary soldiers with submachineguns and jetpacks (Flight 4). Some have gas rifles with about 7 Ranks of Affliction (Cumulative, Dazed/Exhausted/Asleep). 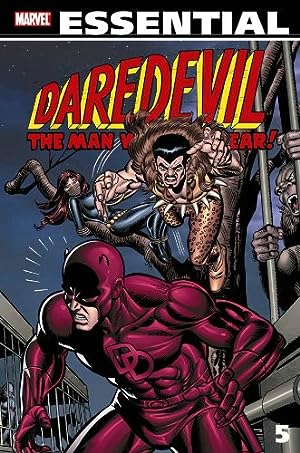 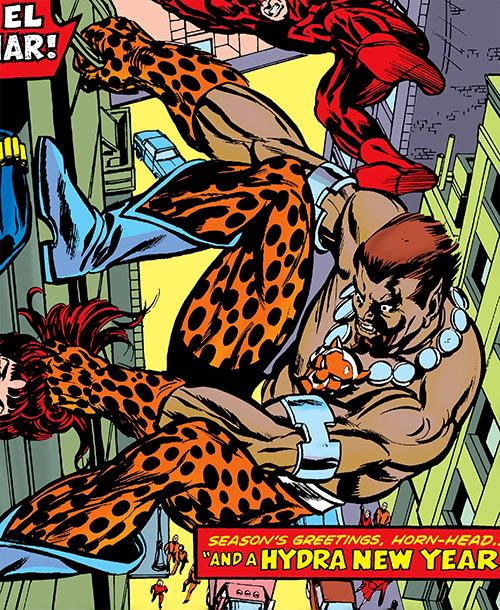 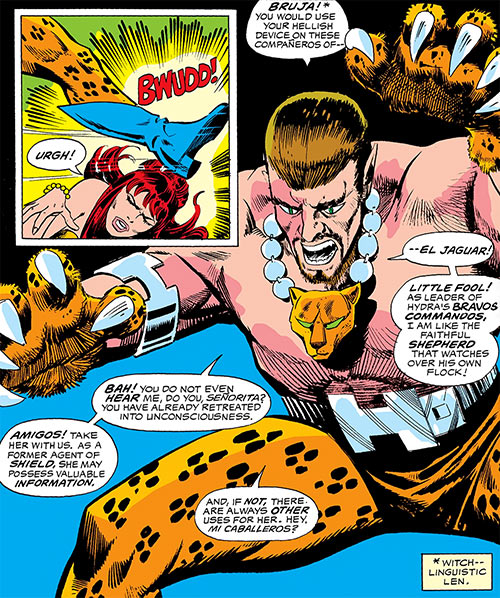