While wearing the Jaguar Belt and uttering the word “Jaguar”, not only can Hardy communicate telepathically with animals, but he:

Jaguar can also travel in space. On the other hand, his eyes are vulnerable, and he can be stunned by “a million volts of electricity.”

He flies by means of twin jets on his belt, though they aren’t really a Gadget but more of a special effect.

While fleeing from a giant dinosaur released by an earthquake in Peru, Hardy entered an ancient Quechua temple. There he found a jaguar-skin belt. He would later learn that it was made by one of the great Primal Powers, gods who ruled the animals of Earth before the coming of humankind.

An inscription on the reverse side of its flying jaguar buckle read, “To be transformed into a human jaguar with supreme power over animals everywhere in the universe, the wearer need only say ‘The Jaguar’.”

Donning the girdle, Hardy uttered the magic words, became the Jaguar, defeated the dinosaur, and said his own name to turn back into Hardy. Thereafter Jaguar went on to become one of the premiere heroes of his world.

Jaguar is your classic “Goody Two Shoes” hero spawned from the early 1960s. He is a real boy scout and is very much his world’s Superman in attitude and power level.

“Telepathic signals from space ! Semihuman creatures from Sagitus want me to fly to their planet immediately.”

The “Primal” Powers may be the Lords of Order and Chaos. Some link to the Tantu Totem possessed by Vixen may be established.

Notes:
There may be a case for Jaguar to possess Animal Mimicry: 20 and a Power Reserve: 10 that only works with Mimicked Powers. 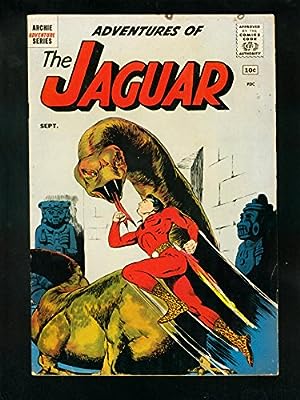 Adventures of the Jaguar