Jaheira (pronounced Jah-Hee-Rah) is a companion in the classic Baldur’s Gate video game, based on Dungeons & Dragon and released in 1998.

This profile, she’s got S P O I L E R S. Howbeit, due to time constraints, our BG companion profile only cover them up to level 5 for now. Or, in Jaheira’s case, Fighter 4/Druid 4.

Jaheira is a militant druid. She’s trained in both physical combat and nature-oriented divine magic.

As a fighter she usually operates as a light skirmisher using a quarterstaff, sling and leather armour.

Her early spells include buffsA way to make somebody more powerful – often a magic spell. and heals, a curse of unluck, and an entangling curse. The latter means that local vegetation animates to hold back everything that moves.

As a druid she also has fertility spells. For instance she mentions she’ll ensure that her first child will be a daughter. One imagines that she also has druidic stuff such as rituals to ensure rain, assist with cattle giving birth, bless soil to be bountiful, purify water, etc.. But this is not the sort of magic one uses on most adventures.

Jaheira is a capable physician even without magic. But this is primarily done using medicinal plants.

In this playthrough, Jaheira mostly memorises healing spells. Since the party relies on her magic to erase wounds and keep going.

In this playthrough, Jaheira mostly provides sling fire to supplement the party’s ranged firepower. But she also trains to become a heavier fighter, so she can join the team’s heavies in melee without being picked as a weak link by the enemy.

As she works toward that role, Jaheira dons magical chain mail and wields a magical truncheon and tower shield (all this stuff is +1). So she’s not unlike a feudal riot control cop, I guess.

The eventual goal is for her to more fully train to wield a scimitar instead of a simple truncheon. For… reasons (regulatory capture by the National Scimitar Association ?), scimitars are one of the few metal weapons druids are allowed to use.

She’s also training to wear one of the party’s ankheg plate mail suits once one is available. Which would make her a much heavier fighter than her traditional leather-and-staff loadout. 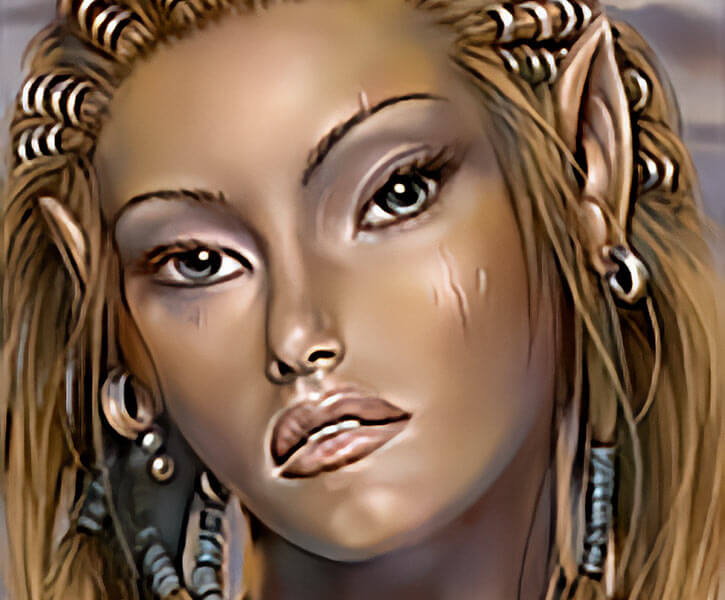 “Druids” in D&D games have little to do with Celtic history.

Rather, they are a modern fantasy concept that usually mixes :

This curious creation has since spread to many heroic fantasy milieux, and become its own thing.

So, don’t expect stuff about Dagda and cauldrons and gaesa and horse sacrifices and repurposed megalithic sites and Alan Stivell’s harp or bombard  when hearing “druid”.

On the other hand, D&D has *also* scoured every shred of known ancient Celtic myths, creatures, spells, curses, imaginary lands, gods, etc.. And some of these were “plugged back” into D&D-style druids. 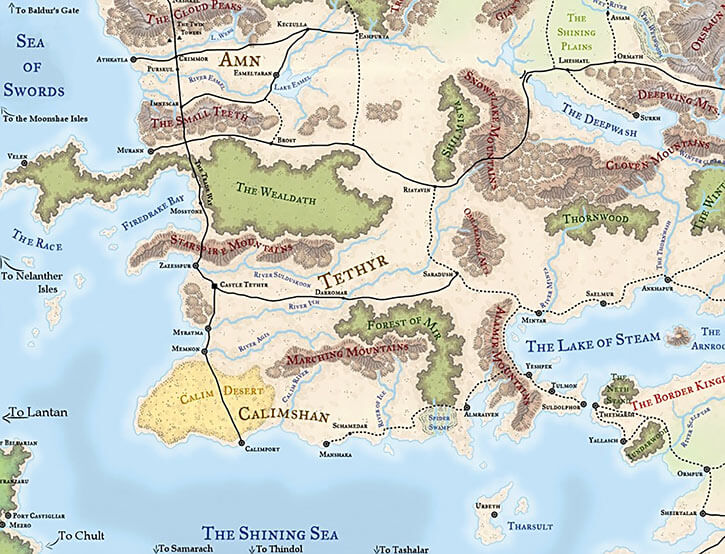 This map (from this site  ) shows Tethyr and the surrounding realms. So you can clearly see Calimshan to the South (where Khalid comes from) and Amn to the North. If you squint, you can see at the Northern edge of the map (just above the Cloud Peaks) the city of Nashkel, which is about the Southern limit of the BG1 expanse.

Jaheira hails from Tethyr  , a nation in the South.

Based on the sourcebooks, I’ve usually imagined Tethyr as a mix of Morocco (mostly), Turkey and Andalusia. But that’s just me. And Jaheira sports an Eastern-Europe-as-imagined-in-Hollywood accent so heh, who knows.

Tethyr Humans tend to have dusky skin and light-coloured eyes. But tones change with latitude – there isn’t really a “Tethyrian type”.

Jaheira is an Half-Elf. This likely means an unusual family history. Tethyr is mostly Human, but there have been centuries of nastiness involving sacking Elvish forests. By the time of Baldur’s Gate, only two Elvish tribes remain in all of Tethyr, and their forests are death traps for intruders.

Our game stats *assume* that her mother tongue is Alzhedo, like her husband. Which would imply that she’s from Southern Tethyr, near Calimshan.

Jaheira was the young daughter of a noble Tethyr family when the revolution occurred. This took place in 1347 DR (Dales’ Reckoning). That’s about 20 years before Baldur’s Gate.

The royal dynasty had ruled for roughly eight centuries. Its fall resulted in many years of chaos, and it had been preceded by a dozen years of war.

The family of little Jaheira had been supporters of King Alemander IV of Tethyr. But he was a tyrant oppressing the people, as well as a traitor.

When the populace rose (with the backing of undercover agents from Calimshan), it was an explosion of hatred called the Ten Black Days of Eleint. Almost everyone in King Alemander’s castle was killed, and something similar happened to Jaheira’s family.

However, a servant girl grabbed Jaheira and ran. One imagines that Jaheira was very young, perhaps 3. If so, perhaps the servant couldn’t in good conscience let such a small child be slaughtered along with the rest. 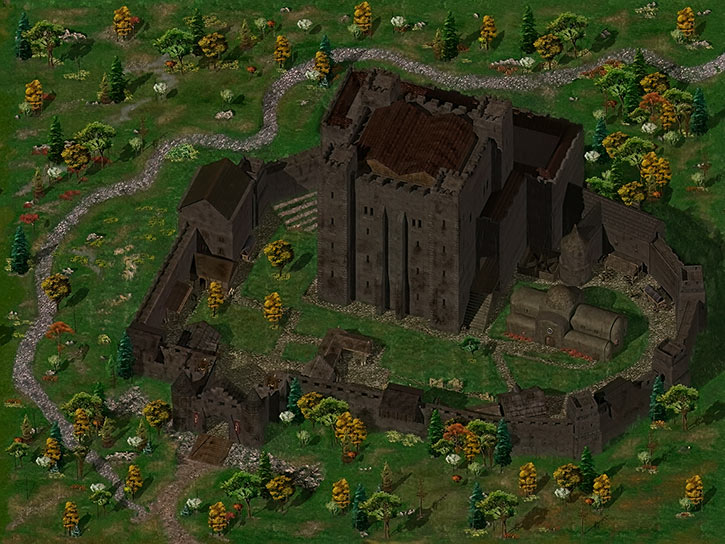 In-game view of the Friendly Arms fortified inn, where Jaheira and Khalid meet Jet and Imoen.

Lost in a forest

Though the servant fled at random into the woods, she lucked out. She stumbled upon an enclave of druids. They agreed to let her go freely and to take care of the child.

Thus, Jaheira was raised by druids to become one of their own. She seems to be almost entirely a product of this culture. She likely was too young to remember anything about her biological family.

Jaheira grew up during the chaotic, bloody years of the interregnumThe span between two regimes or monarchs.. However, stout bands of adventurers — and, ironically, Elves — played an important role in restoring safety and freedom for the peoples of Tethyr.

The Company of Eight  , in particular, fought hard for the common good. But Jaheira was just a teenager during the Company’s most famous exploits.

Again with the harps !

Jaheira’s druidic circle likely was connected to the secretive activist network, the Harpers  .

Though the Harpers are aligned with Good forces, a sizable part of their agenda is about defending nature. They thus have extensive contacts with Neutral druidic organisations.

This is likely how young militant druid Jaheira met Gorion the sage, a Harper agent from Candlekeep. She seems to have accompanied this mage on several adventures.

Jaheira also met a fellow Half-Elf named Khalid. He was a fighter who soon became her husband. When and how they met is unrevealed. But I got the faint impression that they met through Gorion.

The couple once travelled to Athkatla, the capital of Amn (they hated it). Khalid was also once captured and tortured by unidentified enemies (his wife blames the Zhentarim  ). But Jaheira and Gorion rescued him.

In 1368 DR, Jaheira was on the Sword Coast. She and Khalid had been summoned to meet with Gorion, waiting for him at the Friendly Arms fortified inn. Apparently, there was a problem with Gorion’s ward.

Furthermore, they had been tasked with continuing Southward ASAP, to investigate a problem in the Nashkel iron mines.

Jaheira’s portrait in the Enhanced Edition of Baldur’s Gate is the one used here. It is the one that was first used in BG2. One gets the impression that the BG2 portraits were more based on the actual character concepts than the BG1 ones.

The resemblance with the original BG1 portrait of Jaheira is passing, though.

Jaheira is brash, opinionated and overbearing. She routinely assumes that she knows better. She is prone to taking rash initiatives and shouting orders. A young, overcharged druid, she’s looking for opportunities to violently defend natural areas against excessive exploitation.

For everything that’s not her pet causes, Jaheira affects the fatalistic druidic outlook. Everything is a cycle, nature is sometimes cruel, people pass on and it’s all normal.

But despite her insistence on True Neutrality, she has obvious Good leanings. For instance, she will get angry (well, angrier) and physically intervene if she sees helpless people (especially women) being exploited.

Though Jaheira would like to be in charge, the party has a sort of democratic consensus. She also has a well-hidden respect for Jet, as Gorion talked about his ward and her great strengths on many occasions.

Plus, even Jaheira finds it physically unfeasible to throw her weight around the towering Jet Foundling.

Albeit Jaheira often looks like she’s irritated by Khalid and is bossing him around, she genuinely loves him. One suspects that she calms down when it’s only the two of them, plus perhaps some longtime friends like Gorion was.

Khalid reliably manages to get Jaheira to calm down when she gets angrier than her baseline, usually by making her feel loved or making her laugh.

Jaheira doesn’t like cities, due to the damage they cause to the environment (directly and indirectly). 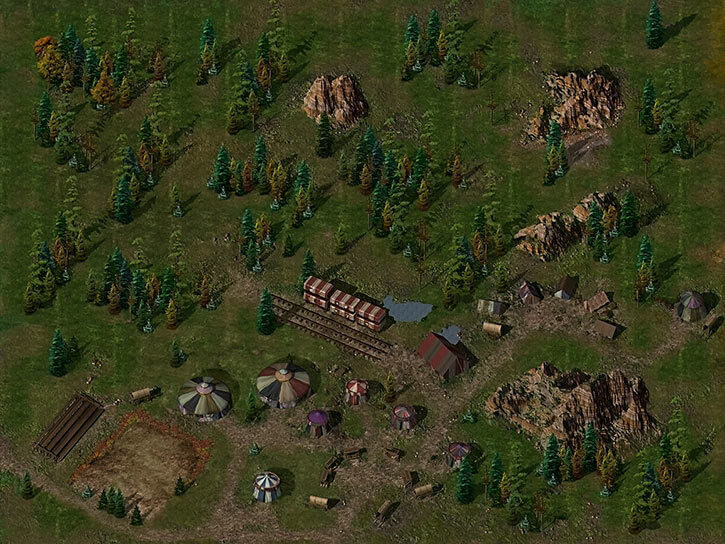 The Nashkel carnival, a notable but not major game area.

“If a tree falls in the forest  … I’ll kill the bastard wot done it !”

“I NEVER GET IRRITATED ! AM THE CALMEST WOMAN IN THE WHOLE OF FAERÛN !”

“This city is a blight on the landscape. Better to have let the land grow wild.”

(Getting worked up as she thinks of Gorion’s death) “I wish we had a tome of leather parchments made from the HIDES of the bandits who attacked you, to pay for our entry [into Candlekeep]. That of the one who had slain him shall be SAVED for the COVER.”

There’s no first aid skill in the game, but it makes sense for her to have it in-universe.

Cost: 7
Power: Slow (EQ) (no AV): 04
Notes: A rare spell with no AV, which is instead governed by the Accuracy (Doom spell) Skill (BC 5, FC 1). However, this skill can have twice as many APs as the AV of a fighter of a similar level in our power scale discussion.
Example: Lvl 5 fighters generally are capped to an AV of 05. A lvl 5 druid could thus have 5×2=10 APs of Accuracy (Doom spell).
Notes: This spell causes a feeling of doom to overwhelm the target. Remarkably, there is no saving throw.

Cost: 10
Power: Duration: 04, Glue (Area of Effect 2 APs): 02
Bonuses and Limitations: Some form of plant life must be present to get animated and hinder the persons in the area.

Cost: 12
Power: Duration: 03, Claws (+1 Bonus): 04
Note: This replaces the caster’s weapon with a magical cudgel for a little while. If using Descriptors, the Claws has the Bludgeon Descriptor.

Cost: 19
Powers: Blunting: 02, Damage capacity: 04, Duration: 10, Enhance (Physical RV): 01 (cap is 05).
Notes: This has been adjusted a bit from the Baldur’s Gate manual to be more coherent with the comparable Armor wizard spell.

Cost: 9
Powers: Duration: 03, Flame Project (Touch): 04
Notes: Creates a blade of fire that the caster can wield without penalties even if they can’t use normal blades.

Cost: 9
Powers: Occultist (Create Artefact): 04
Notes: Occultist (Create Artefact) is taken with a Specialization in creating goodberries. It’s thus essentially useless for anything else. For simplicity’s sake, assume the creation of goodberries is always successful – don’t waste time rolling.
A batch of goodberries has BODY 01, Damage transference (No Duration): 02. They are five berries imbued with healing powers. Goodberries can retain their enchantment for a good while, so essentially this spells creates a small, free healing potion.

Cost: 10
Powers: Systemic antidote (poison only): 04
Note: If the poison doesn’t attack every Phase, the enhanced RV will come into play during the poison’s next attack.

Cost: 5
Powers: Air control: 05
Bonuses and Limitations: Air control is limited to repelling volumes of air, which cannot inflict damage. This lowers the Power to BC 10 FC 2, including a +8 Special Volume Bonus. This is usually used to flush away toxic gasses, though it will not be sufficient if the gas keeps being pumped in (say, a green dragon’s breath).