This specific profile is based on information from the documentary Beyond the Mat, an interview on Scoop Wresting… and lots of totally fabricated stuff. 🙂

Jake Roberts can speak with and control reptiles. He use the senses of reptiles from a distance.

Most importantly, he has the ability to control and manipulate the emotions of other people. Be it fear, sympathy, or trust, Jake uses it to his own advantage to get the drop on his enemies… and everyone is his enemy.

Robert is a skilled tactician and strategist as well. He manipulates situations almost as easily as he does people.

Grizzly was a hard man, with years of violence and drinking behind him. When he raped his girlfriend’s 13 year old daughter, it came as no surprise that the offspring of that union, Jake Roberts, would have some serious problems.

Jake grew up with no love and less affection. He knew nothing but hate towards his father, and the rest of his family did little to improve his faith in humanity. He was, however, an astute observer, and he learned very young how to lie and fake certain emotions to get what he wanted.

By the time he reached his early teens, he was already capable of warping the emotions of those he was in contact with at a frightening level.

Jake used his abilities to get himself a cushy white collar job, in spite of an absolute lack of education or qualifications. He was even fairly good at it, until his boss came home for lunch one afternoon. He found 24 year old Jake in bed with his daughter and a prostitute, ingesting large amounts of cocaine.

Even Jake’s power could not quell his employer’s anger and he left town in fear for his life.

Jake wandered the Southwest for several years, staying primarily in Louisiana and Texas. Then, he made a quick drug run into Mexico for some quick cash. While there, he was abducted by a group of mysterious men who took him to a ranch, miles from nowhere. There, they began a sordid indoctrination.

The “mysterious men” fed Jake enormous quantities of mind-altering drugs, and began a deep brainwashing process. After three months of chemical torture, borderline drug overdoses, and sleep deprivation, they let him rest. Then they brought out “Damien.”

Damien was a baby python, brought in from South America. The mysterious men forced Jake to raise the snake as a pet, and to train it. The presence of the snake, the drugs, and the mind games activated powers in both Jake and Damien. They became inseparable. In the process, Jake developed the ability to control many kinds of reptile life.

Exposure to the drugs and Jake’s powers evolved Damien into a mutant creature, far more dangerous than its relatives, even without being poisonous.

After two years with these men and his snake, Jake was released upon an unsuspecting world. One morning, he awoke on the side of the road with nothing but a pair of jeans and Damien, coiled in a burlap sack. In the jeans was enough money to get food and lodging. Jake promptly spent it all on crack.

Since that time, he has continues his wanderings. He often engages in intimidation and hit work for the criminal elements in New Orleans, Las Vegas, and southern California.

He maintains a small house outside of Vegas where he keeps a menagerie of snakes (both venomous and otherwise). His neighbors don’t know that the run-down ranch house at the end of the street is a snakepit… literally.

6’5” and lanky, with stringy brown hair and a long moustache. He is frequently dressed in cowboy boots and a duster.

Jake is a liar and manipulator. The only time when he is more misleading than when he is lying is when he is being truthful – Jake manipulates truth.

He has gone through periods of debauchery, violent temper, and religious conversion. He has believed fully in the correctness of each of these mindsets. Yet each has proven to be little more than a new way to manipulate and hurt those around him.

Jake’s fighting style stems from his personality. He brings his mastery of psychological warfare into even the simplest of bar brawls, and wastes no motion on fancy footwork or acrobatic techniques.

He will control his opponent’s emotions (with or without his powers) to either bluff his opponent or to make his opponent grossly underestimate him. He lures them in and then attacks with a minimum of wasted motion.

Jake is not the fastest or strongest player when it comes to unarmed combat. But he will draw his opponent in, then strike without warning or time for defense. Usually by striking with his fists or with his signature “DDT” move. The DDT involves grappling his opponent’s head in a front choke and then uses his body weight to drive their head into the ground.

Jake will use dirty tactics whenever possible. He will not hesitate to run and/or hide at the first opportunity if things don’t go his way.

“I tried to kill myself a few times only to wake up the next morning, frustrated, going, ‘Fuck, I couldn’t even die right’.”

The “Mysterious Men” in Mexico were/may have been representatives of the Kobra cult, creating a new tool to set loose in the world on behalf of their master, Kobra.

Bonuses and Limitations:
Systemic Antidote works only on snake venom. It never helps against his seemingly weekly overdoses.

Jake’s “DDT” maneuver is resolved as follows: Jake makes an attack with AV/EV = DEX/STR and OV/RV = DEX/BODY or STR (whichever is higher) with RAPs being resolved as Knockback in a direction of Jake’s choosing. Bonuses and Penalties apply as normal for a Critical Blow. 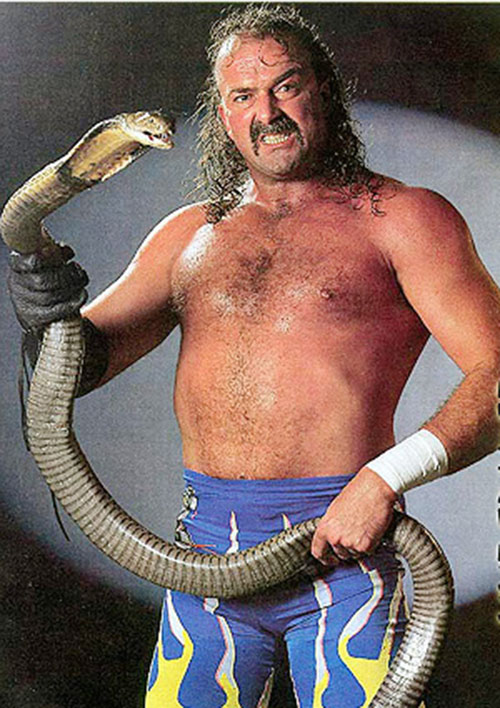