This is the second half of this profile, since not everybody has the time to read all of this in one gulp.

The beauty of our weapons

Jan carries enough firepower and general infantry equipment to arm half a fireteam.

He can do that thanks to Daisy.

This metallic quadruped (“Legged Squad Support System Mark V”) can carry five full-size rucksacks on its midsection, and there are other mounting points for smaller containers. Such as 25-litres backpacks, or jerrycans. Daisy can carry hundreds of kilos over most any terrain. 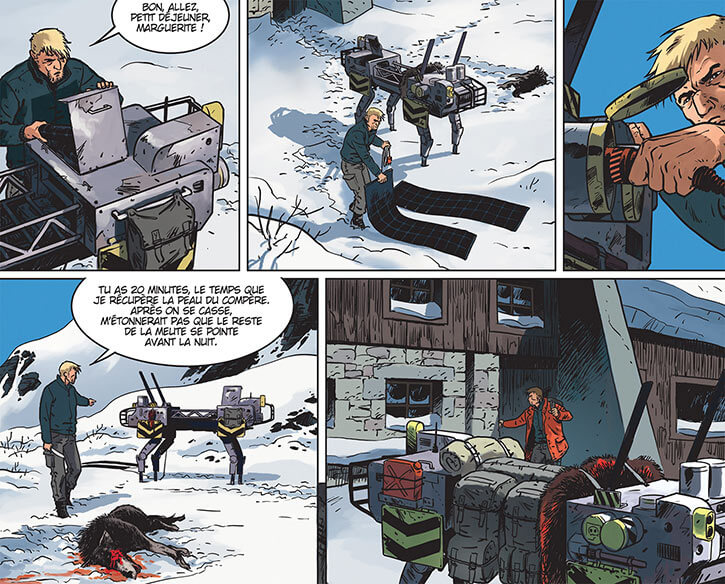 This is a sort of smartphone, working over a secure local wireless network. It can interface with French (or perhaps NATO) military equipment. Military jackets usually have a transparent sleeve over the left forearm, to carry the screen in.

It can be used to program a FAMAS smartgun, a robot mule, a butterfly drone, a sidearm (not shown in the story since Jan doesn’t carry a PAMAS) and perhaps others. A typical example was to set the smartgun to “scan-and-kill mode, all targets in A, B and C categories are authorised, request confirmation before shooting”.

The screen can also do voice commands, and receive video feeds. The in-ear wireless communicator can convey vocal information to the soldier such as “target within range, requesting fire order”.

This is likely an evolution over real-world French FELIN enhanced infantry systems. Namely the SITComDé force coordination tablet. If so it also likely can tag shared maps, provide fire instructions to nearby vehicles and snipers, and other stuff not relevant to an isolated soldier.

It is likely that uniforms have body sensors that can be plugged into the screen. This provides medical information for remote unit monitors used by officers and medics.

The screen can also accommodate some 8-bit video games, such as Space Invaders. Military life can get really boring, so that’s welcome.

From a technical standpoint, this weapon is intriguing.

The FAMAS G3 (let’s call it that) can be mounted on a light, motorized four-legged support. The electronics are plugged into the support so the gun can orient itself. From there it can be directed via the command screen, using a touch interface or voice commands.

This turns the FAMAS into a sort of sentinel gun – an autonomous turret. In this capacity it is remarkably accurate. We see it making two headshots on running wolves at 50 metres within 2 or 3 seconds.

For a lone operator such as Jan, it also provides an invaluable overwatch buddy.

(There’s a weird line about the support being an AMRAAM one, *probably* not meaning the missiles. Also in these panels the gun is suddenly a G2, so that’s odd.)

This aerial drone can be held in the palm of the hand. Its wings and tails look very much like a dragonfly’s, but the head clearly is a camera. Its flight seems discreet, and almost as agile as a real dragonfly’s.

The dragonfly can do day/night short range aerial observation. The video can be transmitted and processed on the command screen. For instance to highlight moving objects or colour thermal imaging.

It normally is housed within Daisy. Since Jan once ordered “launch *a* drone”, there likely are several.

In 2015, Jan was a sergeant with a French unit of marine infantry.

During the flu, Jan’s unit remained mostly cohesive and within the chain of command. They worked to locate refugees and take them to secured areas.

But most of the people they found had been infected. And the orders in such cases were firebombing, then terminating survivors, then more burning.

As they worked near Lyon, they received a report that the Green Army had taken that city. Their goal was its Mérieux medical research lab.

Once the Mérieux site was overrun, the troops within blew it all up. To both deny resources to the Green Army and kill the GA invaders within.

Jan’s unit saw the blast in the distance. They were ordered to fall back toward Switzerland.

A momentary lapse of reason

By this point, Jan’s fireteam was out in the field. They had located a few refugees, and were escorting them out.

The huge explosion in Lyon had them beeline back to camp, to avoid being trapped by the fire.

The truck and the VBL  were caught in a Green Army ambush. The other three soldiers were killed, leaving only Jan. Panicking, he drove away, leaving the truckload of refugees stranded behind. 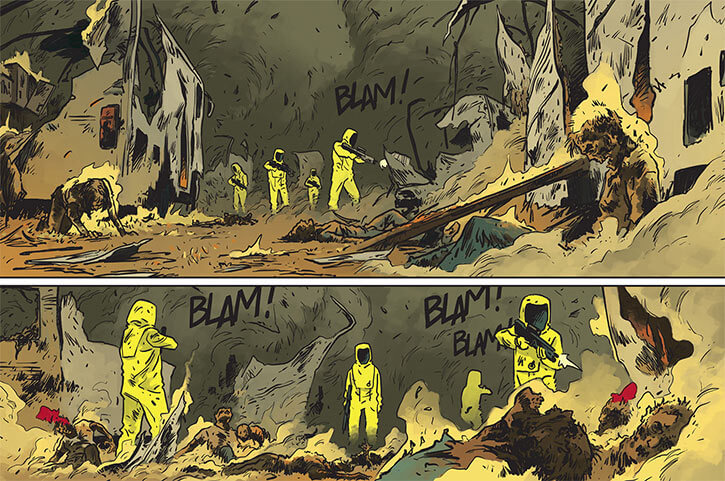 Jan lied and reported that the truck had been hit by a rocket, leaving no survivors. However, one of the refugees had somehow managed to drive out of the ambush and all the way to the camp.

Jan’s Captain ordered the Sergeant to abandon his uniform and leave the camp.

In the short span before the other soldiers learned that Jan had been cast out, the ex-sergeant quickly grabbed supplies. He put everything on a robot mule and hurriedly left.

A stranger in the Alps

Jan heard a rumour about a secure sanctuary in Switzerland. Since he knew that the military had been heading there, this seemed somewhat credible.

He therefore trekked all the way to the Alps.

There it got worse. The hydroelectric dams had been sabotaged to flood the valleys, to cut off the flu. This meant that reaching Switzerland had to be done by trekking high up in the Alps.

Despite encounters with birds and chimera wolves, Jan did reach the Émosson area. Though there was a fortified hamlet, it turned out that the sanctuary had never existed.

The rumour about the sanctuary may also have stemmed from the presence of an abandoned T4 virology lab.

This research team had likely been the last to keep working on a cure. Their Siberian colleagues had been forced to abandon the quest. And their colleagues in the Rockies had been bombed out by the Green Army.

At Émosson, Jan thus met Prof. Max Stirner. Stirner explained that their research had had to stop when the lab’s director and two other senior researchers received a mysterious message, then vanished.

On a hunch, Jan had Daisy decode the message.

It was an evacuation order. Prof. Stirner’s colleagues had been told to rush to the Google X orbital elevator in the Pyrénées, and bring all of their research.

Stirner thought this was tremendous news. It seemed likely that there was a research community safe in orbit, continuing to research a cure.

But Jan didn’t give much of a damn.

The professor thus resorted to bribery. There still was one stripped-down Panhard Crab fast attack/recon vehicle in the village. He traded this vehicle to Jan against a promise to go check the elevator in the Pyrénées.

One gets the impression that Jan used to be a self-centered, underhanded individual. The incident that led to his ostracisationBeing cast out of a society or group. may have been typical of his behaviour.

Being expelled from the Army left him shocked, bitter and alone. He tried to be a better man. But though he genuinely changed, some bad incidents scarred him some more.

He thus prefers to remain a lone, pessimistic, pragmatic wanderer. He knows he doesn’t fit in anywhere, and considers that Humanity isn’t going to survive this one.

That makes him hard to read.

His bitter, pessimistic, loner nature doesn’t mean that he’s brooding though. Jan comes across as friendly, tolerant and even jocular. He likes a bit of interaction with humans, and he’s confident enough in his survival power not to be openly wary.

However, he can be noticeably avoidant with women with whom there’s a romantic chemistry. This might be a mix of not wanting to develop ties, self-loathing and PTSD  .

Talking to/with Daisy is important to Jan’s mental health. Daisy may just be a robot, but talking to an AI is much better than being truly alone.

Jan’s PTSD may hit him if he feels there are lives depending on him. He’s probably not going to bug out, but he may take suboptimal decisions due to anxiety.

Originally, Daisy behaves more like an expert system. It is entirely literal, and has a set range of situations it knows how to handle.

However, it has actual AI learning abilities. And thus, over the years a personality and an ability to take initiatives emerged. Daisy even altered her own programming and tinkered with her code to expand her capabilities.

The “evolved” Daisy is generally trying to be helpful and supportive. Primarily toward Jan, but also toward non-hostile humans. She can be reasoned with, and her speech becomes much less stilted.

Daisy eventually becomes able to replicate emotions, to form friendships, to take complex initiatives, to argue, etc.. A friend once compared Jan and Daisy’s dialogue to that of an older couple. 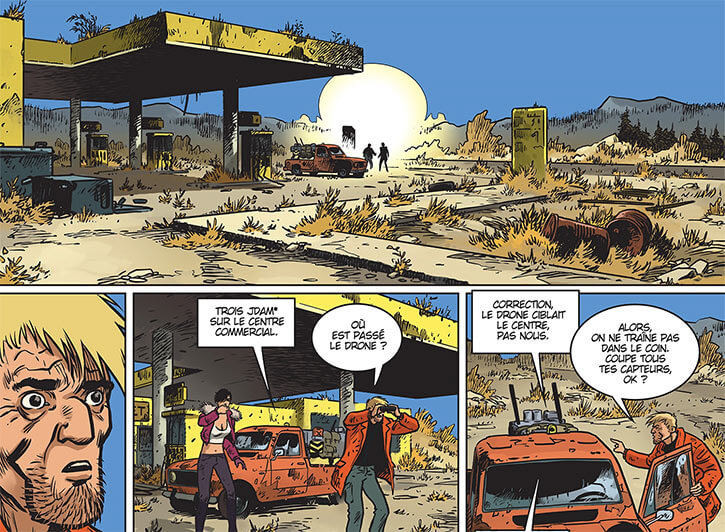 “No way, no how. I’m not anybody’s hope. There’s no hope left anyway. I’m leaving tonight so your Puritan buddies won’t burn me at the stake. If you want to see someone reach that elevator, find yourself another sucker.”

The character is relatively independent from the setting. He could exist in most every post-apoc worlds.

However, his near-future infantry equipment is distinctive. That narrows it down to some settings such as Eve Harper’s, The War Against the Chtorr, some areas of Appleseed, an aftermath to Tom Clancy’s The Division, the standard Car Wars setting, etc..

Acrobatics, Medicine and some Military Science Subskills are assumed rather than demonstrated.

Daisy would be a Pet early on, but she eventually becomes a Character.