These are post-apocalyptic fare, not unlike the Twelve Monkeys movie or the 2013 Elysium movie. We do have a weakness for post-apoc.

(It also shares ground with the The Division video games. As both were presumably inspired by the H1N1 avian flu outbreaks of 2009. In fact, the title and some early artwork give the *impression* that Soleil Froid was originally a perpetual winter apoc, but was changed into a plague apoc during the flu).

Since it’s set in a well-trod subgenre, the story has to go for quality in execution rather than originality in concept. IMO it did a decent job of that. And the story became more relevant over time.

Which isn’t going to matter for most readers. Since TMK the story only exists in French.

For ease of reading, this profile is presented in two halves. The second half is there.

A Colder Sun takes place in 2030, with an apocalypse that started in early 2016.

As most understand it, the H5N4 avian flu virus (likely a mutation of HPAI A(H5N1)) made all sorts of birds impossibly aggressive. This virus could easily be transmitted to humans, with a 95+% morbidity rate.

Within a few years, about 9 people out of 10 were dead worldwide.

Societies and infrastructures crumbled. Subsistence was primarily achieved through scavenging.

In many respects, the setting sticks closely to the real world.

It is easy to recognise the exact areas in France, almost every item and vehicle seen on-panel, etc.. The brands, the names, etc. are also from the real world.

But there are anomalies. Yes, some hurried military technological development took part during the apocalypse. But most advanced tech precedes it.

Most discrepancies are developments that were projected/studied during the 2010s :

So this is a parallel timeline, rather than a possible future for the real world of the 2010s. One that was wealthier and a bit ahead technologically. 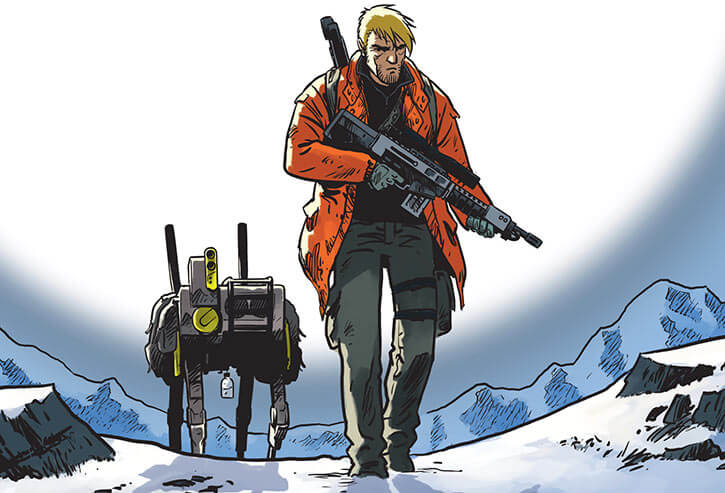 You can’t handle the truth !

The lay understanding about H5N4 is wrong.

In actuality, the virus was engineered.

A deadlier mutation of H5N1 is certainly feasible. It might even be likely over the long term – variations in virulence are difficult to predict. But there’s no reasonable way for it to alter avian behaviour to such a drastic extent.

The party behind this was a powerful nihilistic cult, the Green Army. Between this breakthrough and their seizing of entire military arsenals to bomb survivors, the Army came close to its goal of human extinction.

These important truths aren’t widely known. There was too much confusion during the apocalypse. And many survivors are too young to remember much.

In fact, youths are more likely to have been exposed to Green Army propaganda presenting it as a holy, godly movement.

(That we see a lot of US military equipment in France during the story *might* mean that the GA came from the States. Or it might not.)

Something French and from 2016… well, I guess I don’t have much of a choice. That was the year of PNL’s second album, and they’re 1/ hugely popular and 2/ from my much-maligned hometown.

So here’s some trap/cloud rap.

This isn’t the flamboyant kind of post-apoc. With the exception of somehow conditioning birds to attack, everything is down-to-earth.

Even the advanced tech is stuff that seemed feasible-within-20-years-or-so during the 2010s.

Dangers seen during the story include :

Starting with the obvious…

Most birds have been exterminated during the flu. But there are enough remaining that one should be careful at all times. The most enduring ones have been corvids.

Normally, an infected bird will suicidally attempt to peck at any human it sees, to transmit the virus.

Bird carcasses should be burned from a distance, to destroy the virus. Otherwise, it can efficiently spread as an aerosol.

Sites that still have a large number of birds are normally signalled by a white cross crudely painted on a black background. This echoes symbols that were historically used in Europe during the great plagues.

Areas that still have living birds are uncommon. But most groups still prefer to operate at night, when birds cannot fly. A stray attack would be too impactful.

When a large group is found, they have eerily sophisticated tactics. In one case, sparrows were doing recon, and crows were the assaulters. The birds seem to prefer to form such large attack groups, rather than be on their own.

Obviously, these tactics aren’t natural. The Green Army had tested birds whose behaviour had been modified for at least six months before they started infecting them. This likely means that there were two viruses : 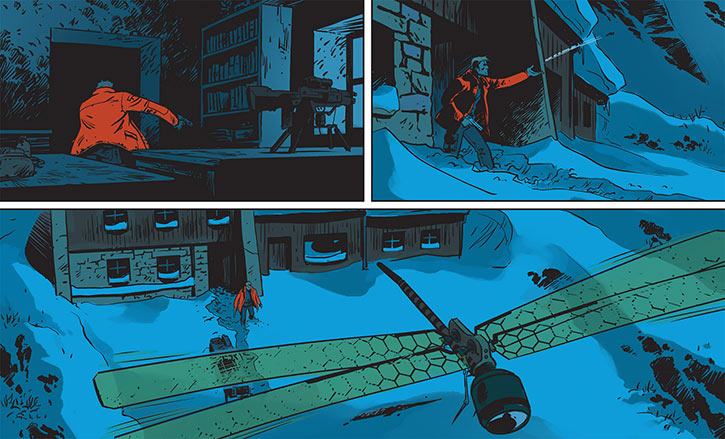 There are packs, or even armies of now-feral house cats roaming around. These are a deadly danger. Even to armed humans, if there’s enough of them.

It seems likely that these cats were modified to hunt birds, using genetic engineering and/or cybernetics.

But it’s been at least 15 years since they were created. So roaming armies of kitties are markedly less common than they were during the flu.

These wolves are clearly shown to be enhanced – and wolves are smart to start with.

These appeared relatively late during the flu, as hunter cats were getting out of control.

Chimaera wolves seem to have been “bred” to maintain dead zones. They’ll kill birds, hunter cats, refugees (under the assumption that those are infected), etc.. So they are way more aggressive than normal wolves.

They’re stated to be hybrids, which seems to refer to cybernetic brain enhancements.

The most recent chimaeras have an implanted Hitachi Tycho tactical computer, about the size of three stacked NVMe drives.

With birds largely exterminated by the flu and humans, snakes have prospered. They have far fewer predators.

However, France has few species of venomous snakes. The reptiles there therefore tend to be more of a boon — as a food source — than a threat. Unless you do stumble upon local vipers, such as asps.

Fishes that were primarily hunted by kingfisher birds are also much more abundant (and edible).

These are flying swarms of microrobots. These seem to have been the last attempt at an autonomous birds-killing agent.

A swarm can kill anything organic within a few seconds. They are kinda like razor blades with wasp wings.

Swarms soon went out of control, and started killing anything they came across. One of the few ways to survive is to hide somewhere sensors-proof, such as a cave or basement. Even high-end body armour will not suffice, unless it’s 100% hard sealed.

The Green Army was quite successful at destroying swarms. This is done using a sort of USB thumb drive to emit a jamming signal, though it needs to be plugged into a computer powerful enough to run it. Bollixed swarms become inert.

During the flu, a number of informal armed groups emerged. Pre-existing criminals also armed themselves and banded together. But most such groups died a long while ago.

An unclear percentage of soldiers became brigands. Their weaponry made them a major source of abuse, murder and theft against civilians. But such groups do not appear in the story.

Small gangs of travellers — road warriors — exist. They drive artisanally reinforced cars, and wield small arms. Since they stay on the move with little interaction with settled persons, they are less likely to get infected.

More generally, there is — by French standards — a startling number of small arms around. Most of them are American military-grade gear, often with recent optics.

Small-time brigands might have old revolvers and break-open shotguns. But a character with a well-maintained AR15 variant with a thermal scope isn’t remarkable.

A simple hypothesis is that the US hardware comes from Green Army invaders slain by the French military.

Encounters with living people are uncommon. They are also unpredictable. Most folks are reasonable, and cautiously help each other. Some are barbaric killers.

Post-apocalyptic cultures have already started to emerge. For instance, one teenager couldn’t understand Jan describing kingfishers as pretty. To her, birds were necessarily gross and disgusting creatures.

Large areas were set on fire during the plague. This usually was an attempt to destroy and cut off infection vectors, such as birds or people.

In many cases, these fires raged out of control and destroyed the sites that were supposed to protect. And in dryer areas, regrowth may yet have to occur – leaving zones with few scroungeable resources. 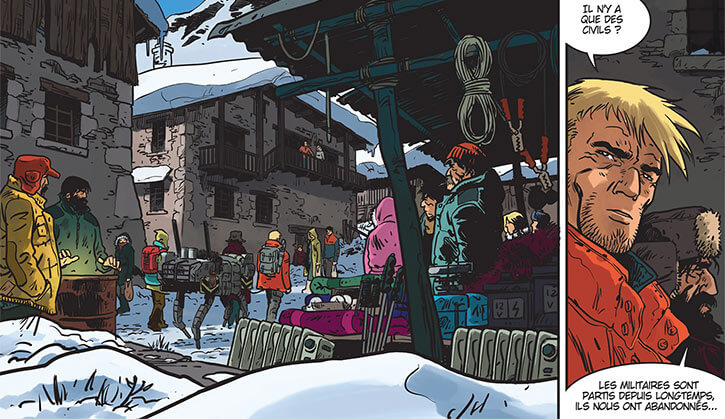 Jan is an experienced, well-trained veteran from the French fusiliers marins  . Which is a bit like the Marines.

He was familiar with special operation deployments. Given his skills, it seems possible that he served with a FORFUSCO special ops commando unit before the flu.

Jan is smart, and has an excellent memory. He displayed a solid knowledge of French history and geography.

He has a strong tactical sense, and is an excellent marksman. He’s also well-trained with operating infantry equipment and vehicles, including sophisticated electronics.

He seems to have had the basic courses in military intelligence. He thus knows about basic electronic and signal security, military data networks, general computer operation, etc..

He’s a professional, and can operate solo in hostile environments for a long while. That includes a surprising breadth of survival skills. Even low-tech stuff such as skinning animals, or fishing by hand.

Jan’s hand-to-hand skills are unusually robust. Even alone and buck naked, he could take on three guys who had small melee weapons.

He’s a light sleeper, which sure comes handy given the conditions. He wakes up in an instant if he hears something, then acts without drowsiness.

However, he’s hindered to a small extenr by post-traumatic stress disorder  , and the secondary effects of ad hoc medication for it. Such as military meth tabs.

The profile continues in its second half, which is there.