Janissary was a new heroine from Turkey. Somehow, all three Planet DC characters from the Mediterranean were a chick with a sword.

These characters could be interesting though, especially with some rework.

As a side note, “Janissary” is not the best name for a Turkish, Muslim, nurturing heroine. Historically the janissaries were regimented slave-soldiers of non-Muslim origin.

The Janissary is an accomplished medical doctor.

She keeps herself particularly fit.

She was noble and brave enough to draw Suleiman’s scimitar from the sand.

The Janissary is very popular in Turkey. Even as an inexperienced heroine humbly trying to do what she can, she has an obvious force of personality, faith and inner strength.

All her superhuman abilities come from her two magical artifacts.

The scimitar (or, technically, a kilij), which was Suleiman’s sword, is a sharp and tough blade.

It reputedly gives her superhuman strength and durability. This later aspect was not clearly demonstrated during her actual appearance – our game stats for it are arbitrary.

It also seemed to give her a greater combat ability and speed than she likely possesses on her own. She could slash through endless hordes of zombies with just her right hand, her left hand being busy holding her book.

The scimitar allows the Janissary to fly quickly. She can swiftly cross Turkey to intervene where needed.

Her other artefact is the Eternity Book, which was Merlin’s spellbook and was owned by Satan prior to that. It holds a number of powerful spells, and in the wrong hands it could be used to create major catastrophes.

Due to her dedication and fearlessness, Dr. Tolon has the spiritual wherewithal to channel magical energy from it and thus cast spell of significant power.

However she lacks control over her spells, since she doesn’t have any magical training or heritage. How far she can go without formal training and without being homo magi is unknown, but it is likely that she’s better at it now than she was in 2000.

In 1566, Suleiman the Magnificent , lawgiver and sultan of the Ottoman Empire, saw his nation helpless before an invading army of demons led by Etrigan. The demon was coming for his half-brother Merlin, who back then was Suleiman’ vizier under the name Merloch.

There was little mortals could do, and Merlin tried to make amends for bringing such a scourge upon Turkey. He enchanted Suleiman’s sword in an Excalibur-like manner.&emsP.He also magically tied a magical tome, the Eternity Book, to the sword.

This way the Book would not fall in Etrigan’s hands, and a future Turkish champion would find the sword to defend their country.

Historically, in 1566, the aged Suleiman was in war-torn Hungary, as part of decades-long efforts to establish Ottoman domination over central Europe. Bed-ridden by the gout, he passed away in Szigetvár.

Meanwhile, his army was taking out the forces of the great Croat military leader Count Nikola Šubić Zrinski. They won, but were unable to go further due to the losses inflicted by Zrinbski’s troops. This battle was of clear historical importance – had the Ottoman won more decisively, they might have been able to take Vienna.

In the DCU flashback Suleiman doesn’t appear to be sick – though he is old. He dies fighting Etrigan in Roman ruins in İzmit , at the Eastern tip of the Sea of Marmara.

One assumes that in the DCU the unsuccessful Hungarian campaign was solely commanded by the Grand Vizier Sokollu Mehmed Pasha, a Janissary. The invalid Sultan did not symbolically accompany the troops.

Perhaps the lawgiver Suleiman instead was on some sort of medical trip with Merlin to relieve his gout before it was too late.

For there lay Nicomedia

On the 18th of August of 1999, Stanford -educated Turkish physician Dr. Selma Tolon was in İzmit with Red Crescent medical teams. The Gölcük earthquake  had just ravaged the era, killing thousands. The Crescent doctors were busy getting people out of collapsed buildings for emergency care.

Using a broken piece of rebar, Dr. Solon saved three persons trapped under a ruined wall. The building then collapsed on her. 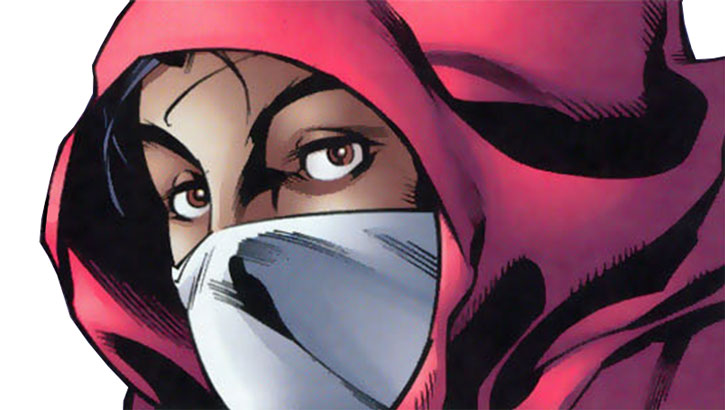 As it turned out, this was the exact same spot where the lawgiver Suleiman had died, in now-underground Roman ruins near ancient Nicomedia. A newly-opened fissure led Dr. Tolon to the sword of Suleiman and the Eternity Book.

Being fiercely patriotic and unfailingly kind and noble, she was deemed worthy of their power. The physician therefore set out to learn to use them for the greater good.

Taking a cue from America’s super-heroes, she developed the costumed identity of The Janissary. She first came into the public eye after saving Turkey’s president (presumably Mr. Süleyman Demirel) from an assassination attempt by rogue soldiers.

She has ever since been considered a major heroine in her country.

In 2000, the Justice League enlisted the Janissary’s aid. They sought to defeat a mad Turkish general who had bargained with the demon Iblīs. The officer, Anka Kazim, was a nemesis of sort for the Janissary. He had also been behind the 1999 Presidential assassination attempt.

His plot to take over Turkey was defeated. The novice heroine made a good impression on the big leaguers — especially Aquaman, who kept hitting on her in an embarrassing manner.

Her self-effacing and self-sacrificing nature made her agree to being possessed by Iblīs in exchange for sparing civilians. But Dr. Tolon’s inner strength enabled her to regain control for a bit. She broke the possession by doing what was anathema to the proud Iblīs – prostrating herself in prayer before Allah.

What the heroes didn’t find out was that the whole mess was instigated by Etrigan. The Demon was determined to retrieve the Eternity Book for himself. He likely plotted again against the Janissary.

The Janissary’s appearances since have been at best sporadic. Yet, one assumes she had numerous adventures in Turkey.

In 2001 she joined the small army of heroines led by Wonder Woman to retake Manhattan. It had been magically captured by Circe and a huge force of villainesses. Dr. Tolon was briefly seen defeating the Body Doubles (Carmen Leno and Bonny Hoffman). 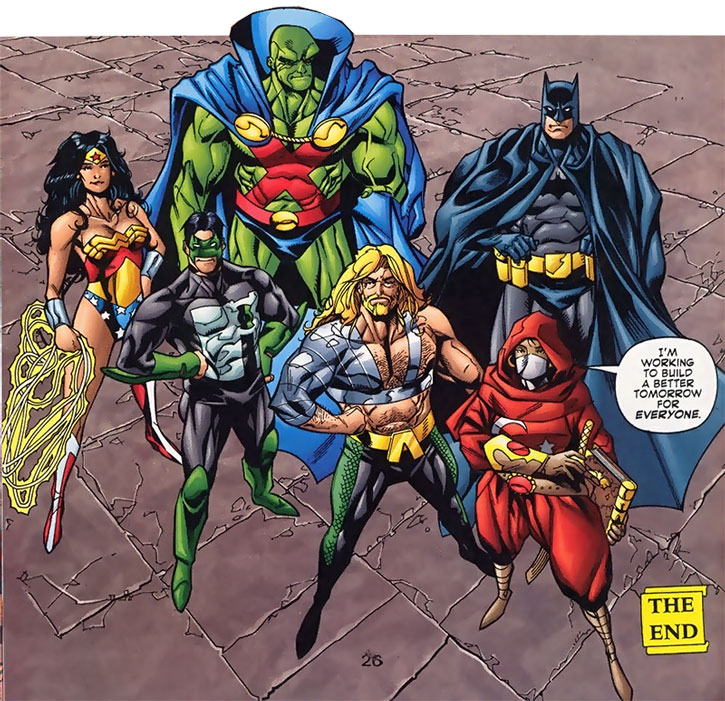 In 2005 she was spotted at the Oblivion Bar, a neutral pub catering to magicians and other mystical characters. This led to working with Zatana and numerous other magic heroes to purge Gotham of the debris of the Rock of Eternity, then rebuild the shattered Rock. These events marked the beginning of the Tenth Age of Magic.

In 2007, Dr. Tolon was among the women contacted by Oracle as she was setting up a new iteration of her Birds of Prey organisation. Whether this led to common work is unrevealed.

The Janissary’s veil and hood are chiefly intended to protect her secret identity. As a modern Turkish Muslim during the early 2000s, she does not wear any special headgear in her civilian identity.

Selma is, roughly in that order, a compassionate doctor, a good Muslim and a patriot. She’s a Lawful Good type and is particularly humble, empathic and helpful.

She has a great strength of personality but behaves in a self-effacing, self-sacrificing way. She considers herself to be but a humble servant to her countrymen and, of course, God. A medical doctor, she takes the Hippocratic Oath very seriously and refuses to harm any living creature – which may well extend to animals.

Although inexperienced, openly admitting it and having trouble getting her spells right, she is pretty efficient – and good at saving people.

Big supernatural menaces, burning giant demons and zombie hordes were a tad above her then-current weight class. But with advice from more experienced heroes such as Batman she rose to the occasion just fine.

(Facing a series of crises) “Allah, I accept whatever challenges you send me, but please… no more tonight.”

“Actually, this blade is the source of my strength, Aquaman. Besides, the Turkish scimitar is much sleeker and sharper than your unwieldy [broadsword]. No offence, of course.”

“You are a disgrace to the Muslim faith and your country, Kazim.”

“I can’t tell you my real name, but I can tell you that I love this country… and I swear that I will help rebuild her today… and protect her as long as I live !”

Selma is a scientist and a doctor, and does not have either magical training or a magical background. This makes it difficult for her to cast spells from the Eternity Book properly.

Still, she has enough affinity with it to always find the spell she needs within seconds and to channel the magical energy.

Lacking the Homo Magi advantage (or something similar), one can either attempt an Occultist (Occult Knowledge) as AV/OV against 03/03 or an INF/AUR roll against 05/05. The spell is cast following those rules : 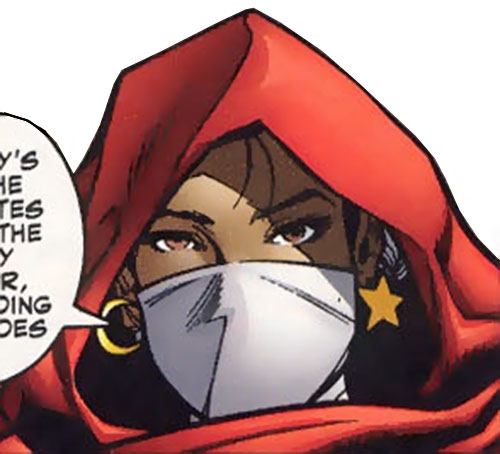 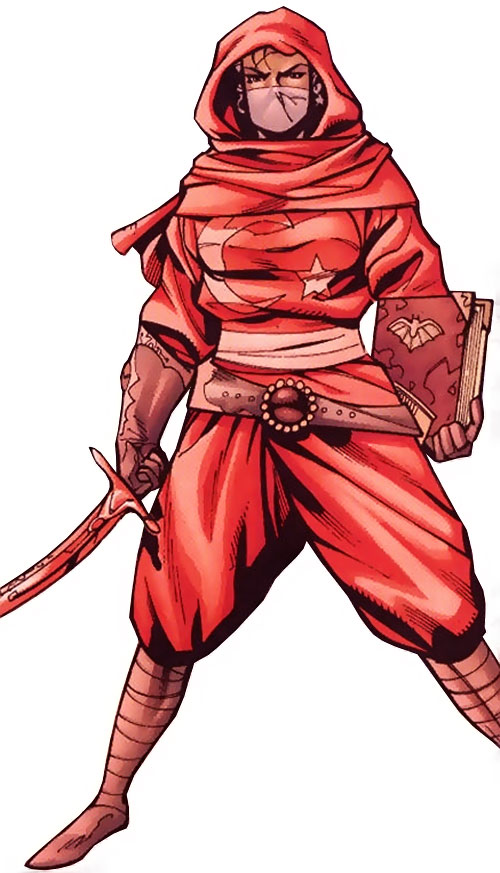 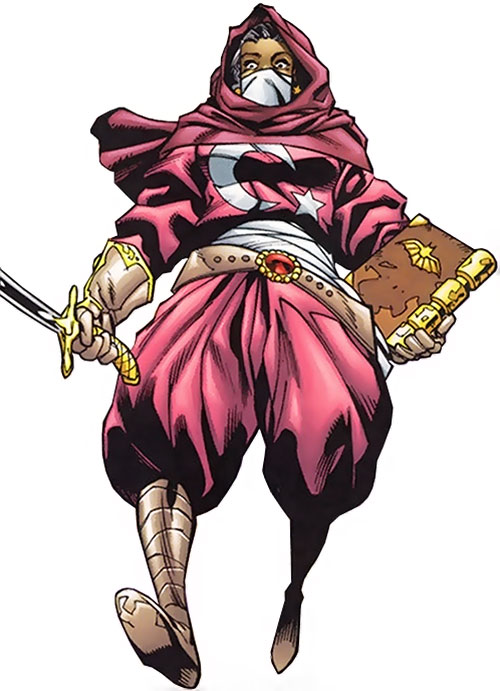 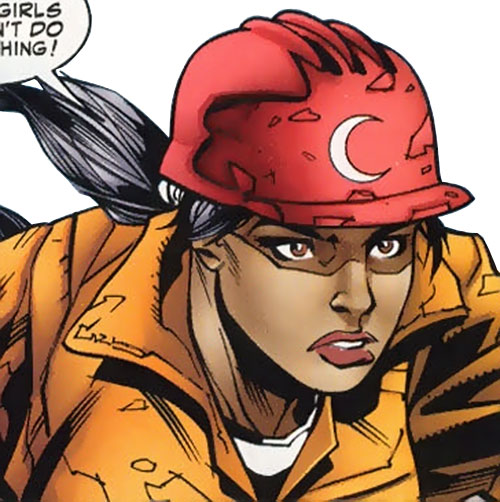