Janus suffers from a severe dissociative disorder, and can physically split into two persons.

The both of him could handle Manikin’s “cave man” body. Therefore, he’s probably a strong and ferocious fighter. But this is not well-established and the game stats are speculative.

In his calm, one-bodied state he’s a particularly creative artist.

Once the madman known as Scramble, Lionel Jeffries supposedly recovered his sanity. He then put his life-manipulating powers to good use as the director and head physician of the New Life Clinic. Other healthcare establishments started sending their incurable cases to New Life. Miraculous recoveries happened there with some regularity thanks to Jeffries’ powers.

However, Scramble was not actually cured at all. He had just learned to fake it. He had a secret underground lab built under the Clinic, where he resumed creating “superior” forms of life to satisfy his deranged dreams.

Obsessing over superhumans, Jeffries identified several persons around him who had superhuman potential. They presumably had an x-factor genetic sequence that he could activate with his own powers.

One of the latent mutants was one of his best surgeons, Dr. Knapp. The others were patients with grave mental issues. Jeffries kept the potentials locked in bare, transparent cells, uncared for and without any psychiatric support. Meanwhile, he kept experimenting on them.

One of Scramble’s tricks was to use the body parts of his dead victims. He would graft these on other subjects using his powers, to obtain a better specimen. It is thus possible that some or all of the future Derangers received such grafts to facilitate the expression of their power. Or they may have been intended as donors.

Vaguely similar techniques would be later used by John Sublime for his U-Men.

Lionel Jeffries eventually revealed his insanity as he merged with Roger Bochs and became the creature Omega. Alpha Flight defeated it. During the clash, Dr. Knapp’s powers were activated –
he would become Manikin. Lastly, the captive superhuman mental patients were discovered.

The Canadian state had the patients transferred to a government hospital. But there was little doctors could do beyond keeping them sedated to avoid complete mayhem.

This is where they were found by the madman Bedlam. Bedlam took psionic control of the patients, and turned them into his superhuman puppets. The patients could follow his orders, but were practically incapable of speech or coherent thought. 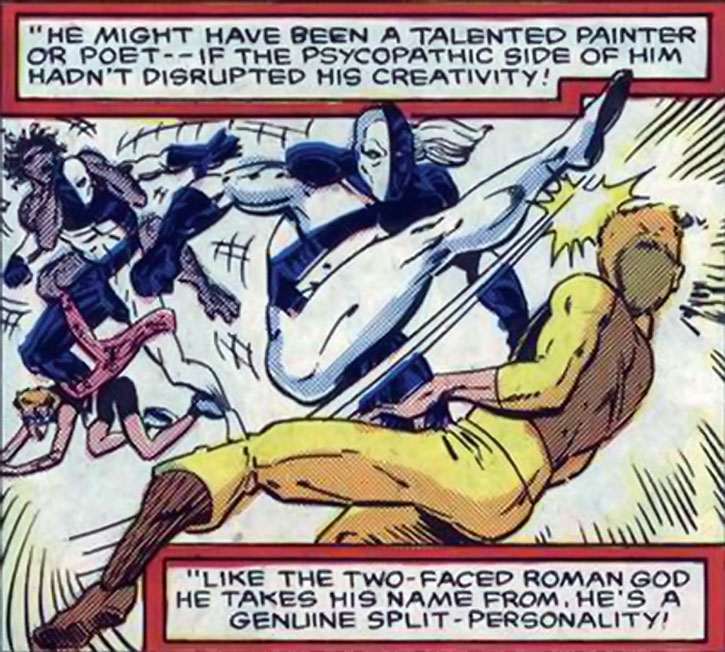 Bedlam gave them code names – Freakout, Breakdown, Janus and Goblyn. He called this “team” the Derangers. In Bedlam’s sick mind, they would be the vanguard of his new race.

Bedlam also captured Alpha Flight (minus Box). He set up a big fight between his subjects. The goal was to see which ones would be the most worthy to serve him and be the true master race.

Despite Bedlam’s powers, Alpha Flight rallied to some extent. They took control of the fight, even turning Freakout and Goblyn against Bedlam. Bedlam lashed out and seemingly killed all the patients save Goblyn. He was nevertheless defeated – in part thanks to the arrival of Box and Wolverine.

Bedlam and the Derangers are presumably dead, since after the battle four bodies were taken away.

There is very little information available on most Derangers:

No real names were originally given for the Derangers. This may be because, with the apparent exception of Goblyn/Dean, Jeffries seemingly assembled them from multiple New Life Clinic patients.

One gets the impression that there was a “core” person whose biography is sketched out above. But bits from a number of other sick persons were swapped in and out to build the Derangers.

Hard to say. Like to other Derangers he did not speak. He seemed to be a determined, aggressive fighter who waited for a good moment to manifest his power and gain the upper hand.

Perhaps the group formed in Arkham Asylum (look out, Batman !), given their psychiatric histories. This group could also be appropriate opponents for some versions of the Doom Patrol.

Bonuses and Limitations:
Split : No AP Loss Per Split.