Jar-Jar Binks was one of the characters in the Star Wars prequel trilogy – the three movies released from 1999 to 2005.

Supposedly intended as comic relief, he was less than positively received for more than a few reasons. Whether he replaces the 1978 Star Wars Holiday Special as the lowest point of the franchise is debatable.

Being a Gungan, Jar-Jar is amphibious (in DC Heroes RPG terms, Sealed Systems), with powerful legs (Jumping, Swimming) and a skeleton composed mostly of cartilage (Skin Armor). Jar-Jar is unusually clumsy for a Gungan and has been responsible for numerous accidents (Unluck).

Despite being relatively uncoordinated, Jar-Jar has always managed to avoid serious injury and has even made inadvertent contributions in several critical situations (Dumb Luck).

“Meesa exiled. You might say…meesa clumsy. You might say me boom the gasser, den crashin’ de boss’s heyblibber, den banished! Meesa gathering da mornin’ crunchen in da swamp and meet da Jedi. Then, !BOOM! Me end up with them! Me very VERY scared! Meesa become general in Grand Gungan Army and bash the mekaneks! Meesa HERO!!!”

“Den meesa become a Representative to de Republic Senate! When Senator Amidala trust me with her senatorial powers, meesa made a little itty bitty mistake and kinda doomed the graaand Republic to the evil rule of Emperor Palpatine! Oops! Meesa sorry! Meesa so sooo sorry.”

Jar-Jar Binks is a Gungan, a race of gangly amphibious humanoids with vaguely duck-billed faces, yellow eyes on stalks, and large ear flaps. Jar-Jar has mottled orange skin and a sort of stilted walk like a giraffe’s.

During his time in exile he wore only his homespun clothing. After he became a Senatorial Representative, he wore elaborate robes in earth tones that complimented his natural coloration.

Jar-Jar lives a life of loud desperation, seeking only to make himself useful and unfortunately repeatedly causing accidents. He means well, though, and is usually an enthusiastic and gregarious individual.

By the time of his senatorial appointment he has calmed down somewhat, but still gets excited fairly easily.

Jar-Jar hooked up with Kyle Rayner on Rayner’s trip through the various dimensions seeking the Worligog during the JLA “Rock of Ages” storyline. Jar-Jar accompanied Kyle back to the Earth Dimension and is now a sort of JLA sidekick à la Snapper Carr during the JLA’s early years.

When Jar-Jar and Plastic Man are in the same room, Batman actually finds himself reconsidering his vow to never take a life. And for God’s sake, don’t mention the time Jar-Jar tried to make friends with Batman by putting on Jason Todd’s Robin costume…

In this case, Jar-Jar trades his Credentials for Exile (Voluntary). Feel free to horrify your players by arranging for Jar-Jar to get a Green Lantern Ring at some point. Or, in a horrible twist on the origin of Beta Ray Bill, Kitten suggested that Jar-Jar get Thor’s hammer: “Meesa use dis hammerin, okey-day? If Thor knocked-out, Gungan gotta do something. Here me goes !”

If you want to make Jar-Jar a native of DCU Earth, the Gungans could be an offshoot of the Poseidons. They built their city of Otoh Gunga closer to shore after additional changes in their biology rendered them amphibious. Jar-Jar might be acquainted with the Swamp Thing, having met him in the swamp during Binks’s exile from Otoh Gunga.

Jar-Jar’s exile was interrupted by the Invasion , during which he assisted Aquaman in battle against the Gil’dishpan. Indeed, the arrival of the Grand Gungan Army, summoned by Jar-Jar, helps turn the tide of battle.

Since then, Jar-Jar has been an occasional ally and/or sidekick of Aquaman: “Mmmmm…Meesa thinken you not be pettin’ the piranhas withouten yousa get a steel glove next time, Arthur, okey-day ?”

Bonuses and Limitations:
Sealed Systems only allows Jar-Jar to hold his breath (-2FC).

Equipment and Pets:
Jar-Jar used the following items while serving as a General in the Gungan Army:

Previous to his adventures during The Phantom Menace Jar-Jar had Exile (Involuntary), Socially Inept (Serious), and lacked any Connections, Credentials and Popularity. He also only had Resources: 001.

Leaked details from the Episode III script indicate that Count Dooku/Darth Tyrranis is only a pawn. The true apprentice of Palpatine is Jar-Jar Binks, a.k.a. Darth Dread, who will engage in a full-scale slaughter of the hapless Jedi in the next movie. His simpleton guise masks a Machiavellian intellect and his clumsiness belies his brutally efficient economy of motion in combat.

To model Darth Dread Revealed, add 07 APs to all Attributes except STR and BODY, which only get 02 more APs each. Boost HPs to 150 and Resources to 028. Add Acrobatics, Military Science, Martial Artist, Thief, Vehicles, and Weaponry Skills (all Linked), Occultist (Force): 14 and all Force Rituals (All Memorized).

Add Quote: “Meesa gonna quench the heat of my blade in the blood of yousa entrails! Bwah-ha-ha-ha-ha!” and give him a sithsaber. 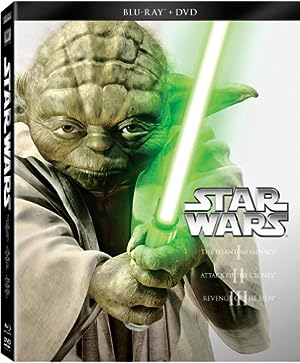 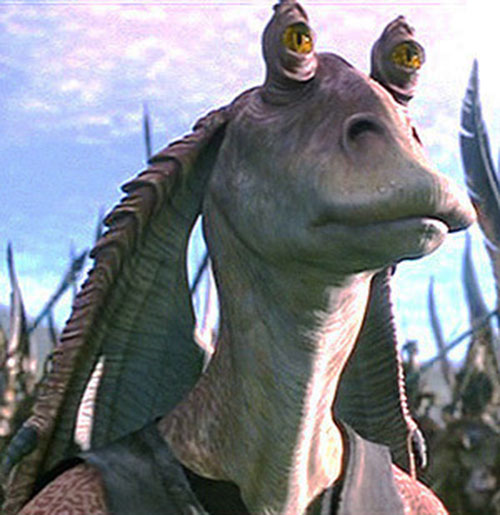 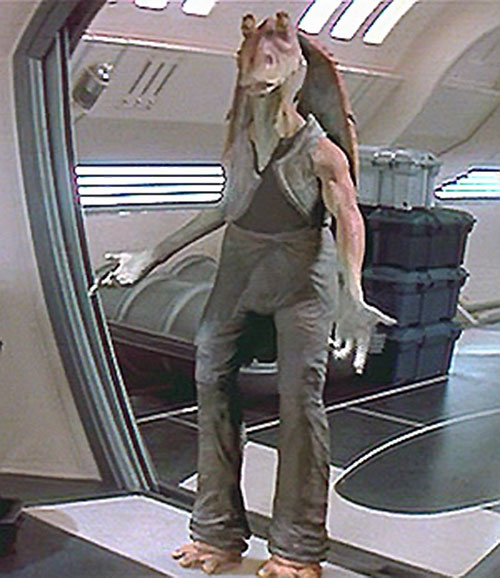 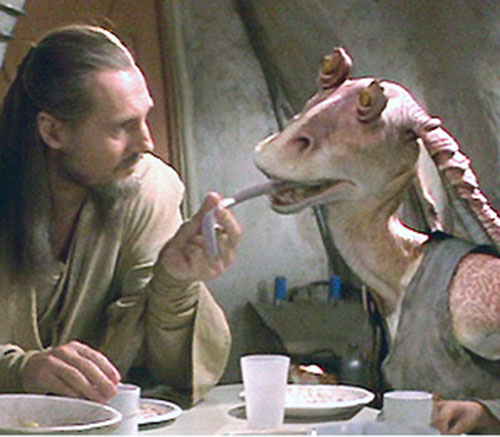 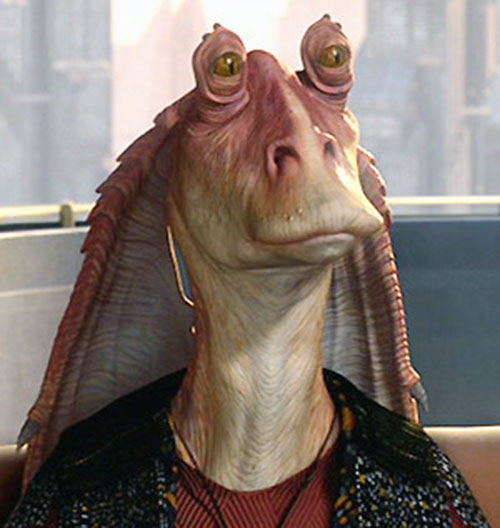 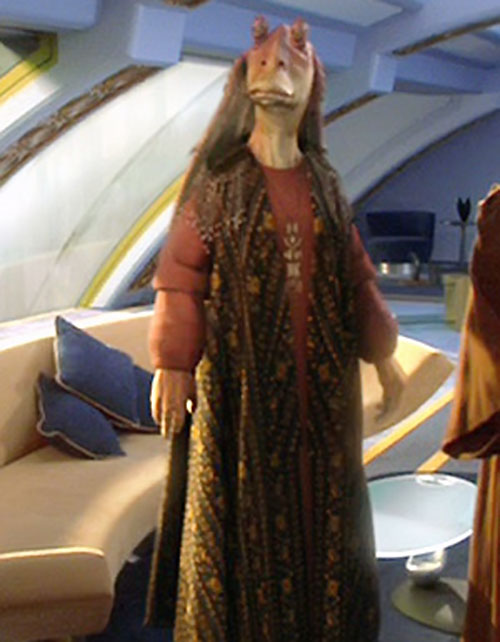 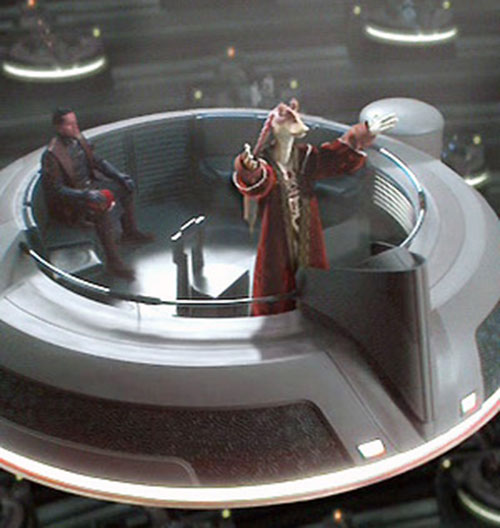 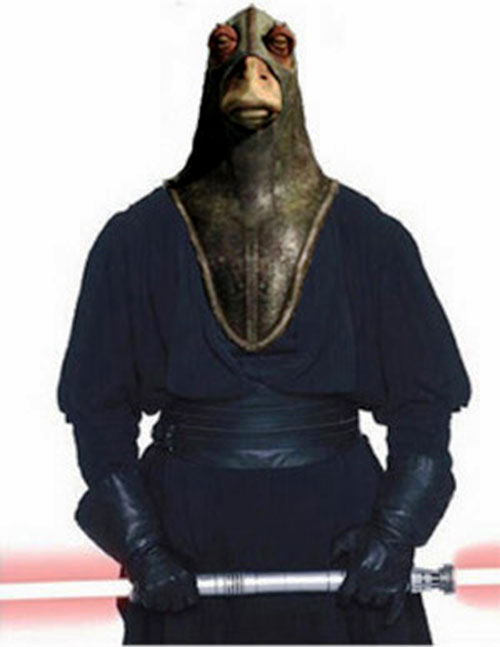 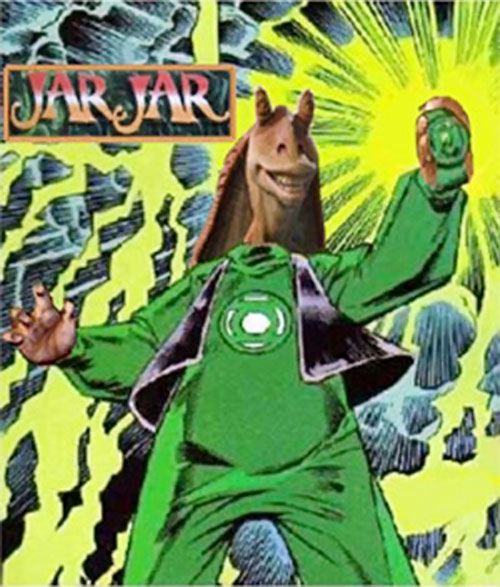 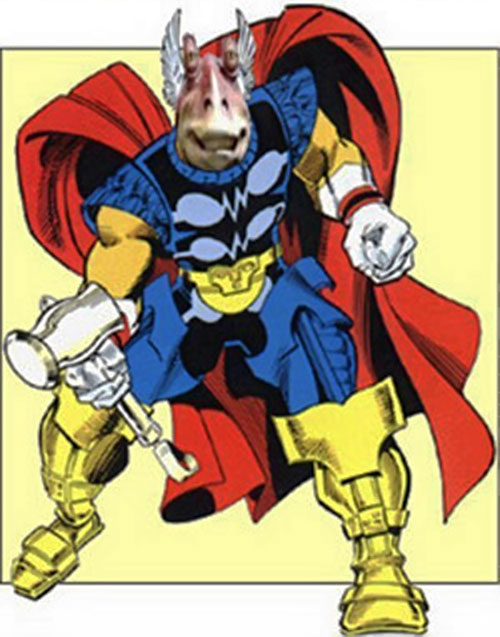