Jarhead is a superhumanly strong and agile man, able to leap from a helicopter at 50+ft in the air and land unharmed.

He is strong enough to break firearms with his bare hands, and survives a direct hit from an R.P.G. with no harm.

One month ago, Jarhead is taken by helicopter to a remote mountain in Peshawar Pakistan where he begins to assault the terrorist occupants. He believes he has finally found the hiding place of Osama Bin Laden. He notes that the resistance is strong but half-hearted somehow.

He mows through the defenders and makes it to the cave where the terrorists stop fighting and admit to him that they killed Bin Laden three days ago and had been trying to figure out how to surrender, noting that Bin Laden was a truly evil man.

Arlington county, Virginia, The Pentagon. Jarhead is promoted from Sergeant to Colonel. Jarhead notes that he couldn’t be in the field as a Colonel, and his superior notes that since the Global Humanitarian Phenomena began there is no “field” anymore.

Al Qaida, the General states’ is as defunct as Compact Discs. Defense spending is being cut in half.

The Pentagon. Colonel Nash (Jarhead) is giving a briefing ordered by General Markinson, to review pre-GHP geopolitical situations and post-GHP military buildup. He notes that while violent conflict has come to an end, it hasn’t prevented the militaries of the world powers from repositioning their forces into key strategic positions.

He believes the world is on a precipice; that as long as the GHP remains in effect nothing happens, but should it come to an end, World War III will occur.

Jarhead is present at the final battle to protect Oculus’s device. He brings the entire U.S. Army with him and confronts Sabre beating him and smashing his newly acquired helmet. Sabre however activates the suit’s nuclear blast beam (?) and wipes out Jarhead and his troops.

Jarhead is a military man, patriotic through and through.

“Thank you for being this stupid. I thought I was going to die if I didn’t see combat again.”

“This is a fight for the world here. You think I wouldn’t bring the entire U.S. Army with me, dipshit ?”

Jarhead: “As a result, the world… I believe… is on a precipice. As long as the GHP remains in effect, nothing happens and nothing changes. But should the GHP stop for some reason… should we see its effects end… we would tip over the edge.”
General: “And into what, Colonel Nash ?”
Jarhead: “World War 3.” 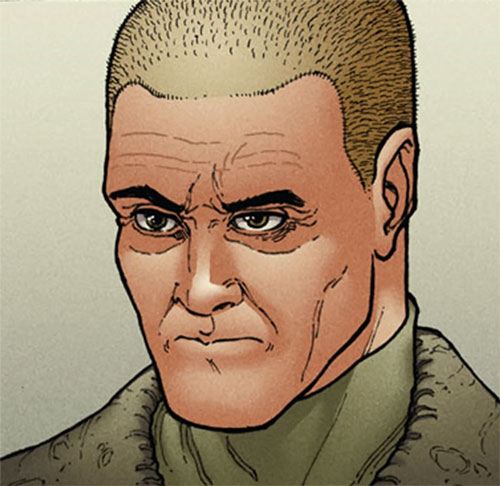