Jason is a superhuman and super tough undead murdering maniac. A normal human doesn’t stand any chance at all against his physical might. He is able to punch straight through walls and a human being at the same time. He can pull down trees and perform any feat of great strength.

Although he’s not particularly dexterous he is a master of melee weapons of any kind. He usually chops his victims into pieces.

Before his death Jason was a stealthy type who successfully avoided capture while preying on the innocents. After his death this ability has increased.

By unknown, probably mystical means, Jason is able to locate any human being within several hundred meters. Darkness doesn’t hinder him much and he’s inhumanly fast for someone so big ; it actually looks like he’s walking fast, but in reality he’s moving much faster than an ordinary human (thus there is no escape).

The most terrifying fact about Jason is that he’s basically immortal. Even though he is dead for certain, he still resurrects back again later on a new killing spree. Might be his hatred is too great to keep him dead…

Late in the summer of 1957, a young boy by the name of Jason Voorhees drowned in the murky waters of Crystal Lake. He drowned due to the carelessness of two camp counselors, who were making love at the time.

However a year later, June 13, 1958, the two same camp counselors that let Jason drown were murdered. This closed down the camp for many years until June of 1979, when a man by the name of Steve Christy prepared to re-open Camp Crystal Lake. 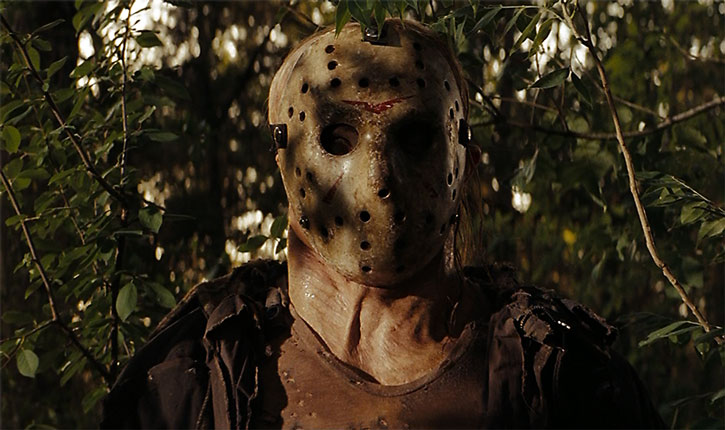 However that night him and eight fellow counselors were slain by Jason’s mother, Pamela Voorhees. All but one girl died that night. The final girl succeeded in killing Mrs. Voorhees near the lake where Jason drowned. Legend has it that by the death of his mother Jason was reborn that very night.

The revenant vowed to take revenge on anyone who dare stepped foot on his camp again.

Five years after the killing spree at “Camp Blood”, Paul Holt opens a training course for camp counselors near the old campgrounds of Crystal Lake. After Jason slices his way through 7 counselors he is meet by a girl named Ginny. Ginny stabs him with a machete and escapes into the night.

However, Jason also escapes to a nearby town. He kills off two store owners and changes into a new outfit. He also dons the infamous hockey mask for the first time.

Jason then winds up at Higgins Haven where several vacationing teenagers are spending the weekend. Jason once again takes out his anger on these unlucky teens until Chris, a teenage girl, hits him in the head with an axe and kills him. Jason’s body is then taken to the Wessex County Morgue. There he returns to life and kills off two doctors.

Jason returns to Crystal Lake and kills off more teens that are also vacationing at a lake side house. Jason’s murdering spree is thwarted after 12-year-old Tommy Jarvis nearly slices Jason’s head open with a machete. The kid then freaks out after finding out Jason killed his mother just minutes before he returned home and stabs Jason numerous times.

Years later, Tommy who is now 15, loses his mind. He is committed to a halfway house for troubled teens. Then a man whose son was recently killed by a patient masquerades as Jason Voorhees, and murders most of the patients in the halfway house. Tommy is forced to kill the man that night, which further affects his mental state.

One year later, the locals change the town’s name from Crystal Lake to Forest Green in hopes of forgetting the bloody history of this cursed place. Tommy, who is now 16, has been released from the mental hospital. With his friend Hawes, Tommy drive to Jason’s grave to cremate his body.

When Tommy has a flashback of his mother’s murder he snaps out and stabs Jason’s dead corpse with a steel pole. When Tommy goes to get the can of gasoline a lighting blot strikes Jason’s body and brings him back to life.

Jason kills Hawes but Tommy escapes to a nearby police station to warn the town. The sheriff doesn’t believe a word he says and locks him up in jail over night. Meanwhile Jason makes his way to Camp Forest Green where 5 camp counselors are preparing to take care of about 75 kids for the summer

Jason hacks his way through the unprepared teens. But one of the counselors, who happens to be the Sheriff’s daughter, has left. She went Tommy in hopes of winning his heart.

She helps Tommy escape from jail and they speed off for the campgrounds only to find that Jason has killed their friends. Tommy canoes out to the lake and calls Jason out to battle him. Jason follows him to the lake. Tommy then wraps a chain around the slasher’s neck and drowns him in the same spot were he died as a child.

The town once again feels safe and returns the name back to Crystal Lake.

Five years later Jason’s body is still resting in peace at the bottom of Crystal Lake. However, 17 year old Tina Shepard raises his body in attempt to bring her father back to life with her telekinesis  power.

Jason quickly recovers power and kills off the 7 teenagers who are partying at a lake side house. Jason is now ready to kill off Tina as well. But her father rises from the dead and pulls Jason back into Crystal Lake.

Then, in May 1994, a boat pulls an electric cable over Jason’s body. Once again Jason rises from the dead and kills the two teens on the boat. The boat floats out to sea and Jason swims aboard the S.S. Lazarus where a group of studentss are celebrating graduating school.

Jason kills all but two teens on the boat. The survivors flee in a lifeboat to Manhattan for help but Jason is hot on their trail. They get to a sewer when an acid washout nearly kills the two teens but burns Jason’s body.

Eat your heart out

When the acid clears, Jason’s body isn’t found. Thus FBI orders a sting operation on Crystal Lake. An FBI agent is used as bait to draw out Jason to a clearing in the woods where FBI agents are hiding and waiting to blow his body to pieces. However Jason ’s heart is eaten by a coroner who is examining Jason’s body. Jason is reborn through the coroner’s body.

A bounty hunter by the name of Creighton Duke then tells Jason’s half sister that only she has the power to kill Jason. According to Duke, “Through a Voorhees was he born, through a Voorhees can he be reborn, and only by the hands of a Voorhees may he die.”

Duke hands her a magic dagger. The woman finds Jason who is about to kill her ex-husband and stabs the revenant in the heart. Demons then rise out of the ground and pull Jason’s body to hell.

Of course, Jason returned even from that, but in 2008 he was capture by the FBI. However, nothing they could do could kill it, so his death sentence couldn’t be carried out. At one point, when he was moved to a new facility to be cryogenized, he managed to escape briefly. But he was finally frozen.

The corpse was found by an expedition to Earth from Earth-two in 2455, and of course a new killing spree ensued. Jason even managing to upgrade himself with various robotic components making him even stronger and more invulnerable.

Jason looks like a big, bad zombie with an attitude problem and a weapon in his hand. Usually he’s clad in a full body overall in dark colors. He’s quite tall and looks bulky.

The head is covered with a white (or at least it once was) hockey mask although the back of his rotten head is visible. He moves slowly and zombie-like. He almost never rushes unless he is dying again.

Having died several times (or having become quasi-killed) his entire body has rotten. Beneath his clothing and mask he looks like a walking corpse. His undead appearance is extremely scary looking and only the bravest can resist running away when he surfaces. Unfortunately Jason is very stealthy. Most victims won’t even get the chance to escape…

Jason Voorhees doesn’t have much of a personality after his death. Simply put he’s an immortal serial killer who exists to kill. He walks around looking for humans to kill them, not converse with them. Jason almost never speaks. When he does he usually hisses some word of importance to him.

His mind appears to be quite devoid of any rational thoughts – maybe because the brain has rotten. However, it is possible to distract him with germane details about his earlier life. This makes him stand and think for a while after which he will attack as usual.

Apparently Jason sees through any escape plan and always knows where his victims are – he’s by no means an idiot. He’s just a deadly murderer who happens to be quite immortal.

Jason never rushes for a kill, but takes due time apparently taking great pleasure in the hunt. Voorhees is incapable of feeling gratitude, even for those who have brought him back to life. This means there is nothing anyone can do to permanently stop this immortal slasher.

Jason very much prefers killing victims with a melee weapon. He would never use a firearm or other distance weapons, though he can throw his blade. Being inhumanly strong he sometimes just punches straight to the heart of the victims instead of using any weapon.

Jason Voorhees should be real bad news. Jason is particularly scary in a normal human level campaign of occult or mentalist settings.

He might be used with exactly the same history as in the movies even residing along Crystal Lake. But he might also be connected to demons or dark magicians in the DC Universe such as Tannarak, Felix Faust or even Nergal. Certainly he could be used with the normal history with no alterations too still being appropriate and usable.

Equipment:
Usually tries to find a Machete, Knife, Sword, Club or the similar.

Helper(s): Lord Rev. Dr. Paul Soth, Sandor, Sébastien Andrivet. The History is from http://www.voorheeslair.dreamwater.net/legend.html (defunct, now a spam site) with a number of edits and additions. 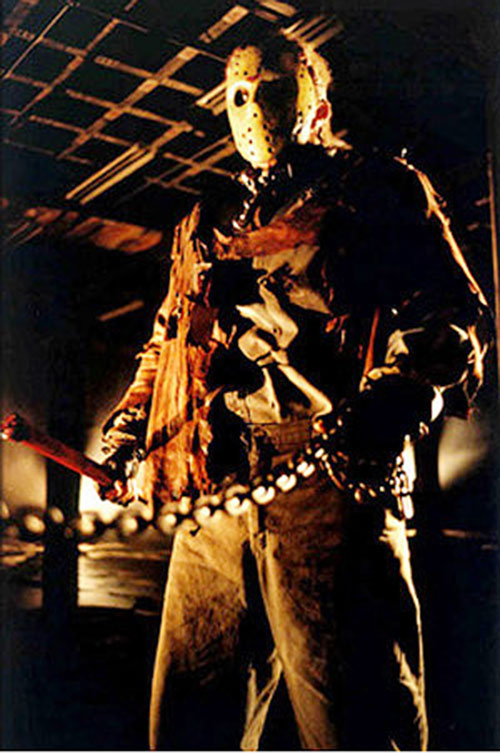 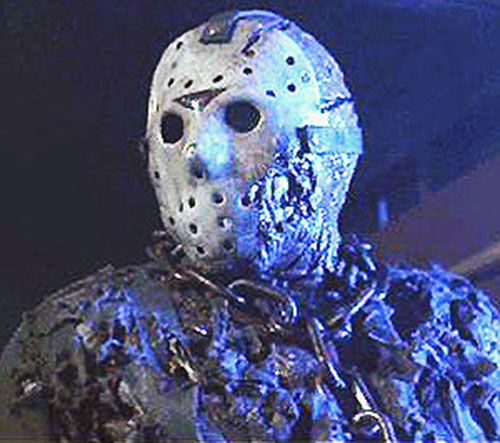 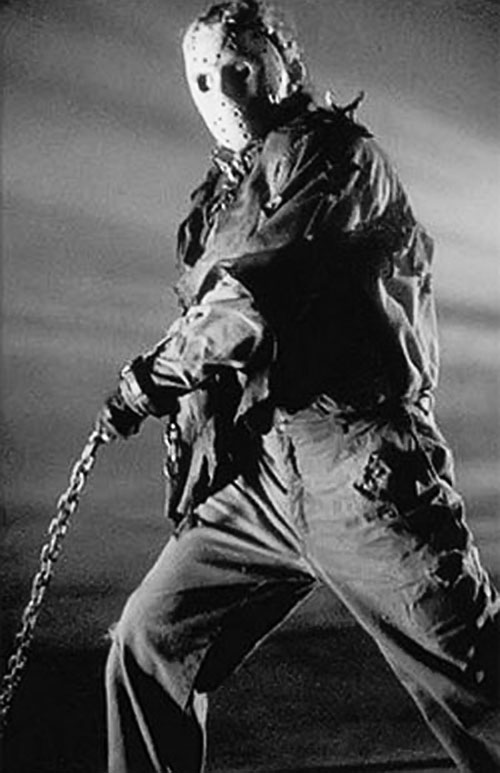 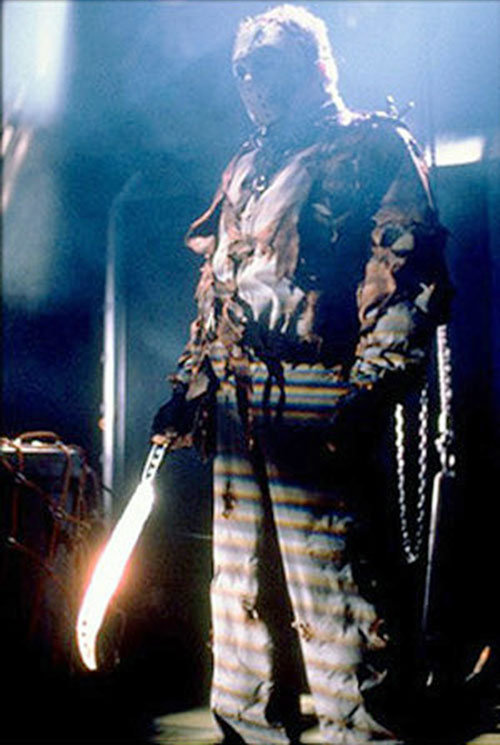