Javelin is a strong and athletic man. Unsurprisingly, he also is a formidable javelin thrower.

Javelin further appears to be a competent engineer, designing and building his missiles.

He carries a number of truncheon-like sticks on his belt. At the touch of a button those expands to become sporting javelins, pointed at both ends and well-balanced for throwing.

They can also be used as a quarterstaff. Javelin is adept at this form of fighting, and the javelins are surprisingly sturdy and heavy. They can even be used as a spear.

The javelins can have specialised payloads. The documented ones are :

His tactics often rely on deception, diversion and anticipating the reflexes of his opponents.

An early example was leaving a decoy javelin… right in top of his hideout. He knew that Green Lantern would almost certainly not investigate further after finding that he had been tricked into tracking down a decoy.

Javelin is also fond of throwing a relatively minor javelin to let his opponent dodge and set themselves up for the real attack. His smoke javelin excels in that role, forcing opponents to move out of the cloud to regain their visibility. 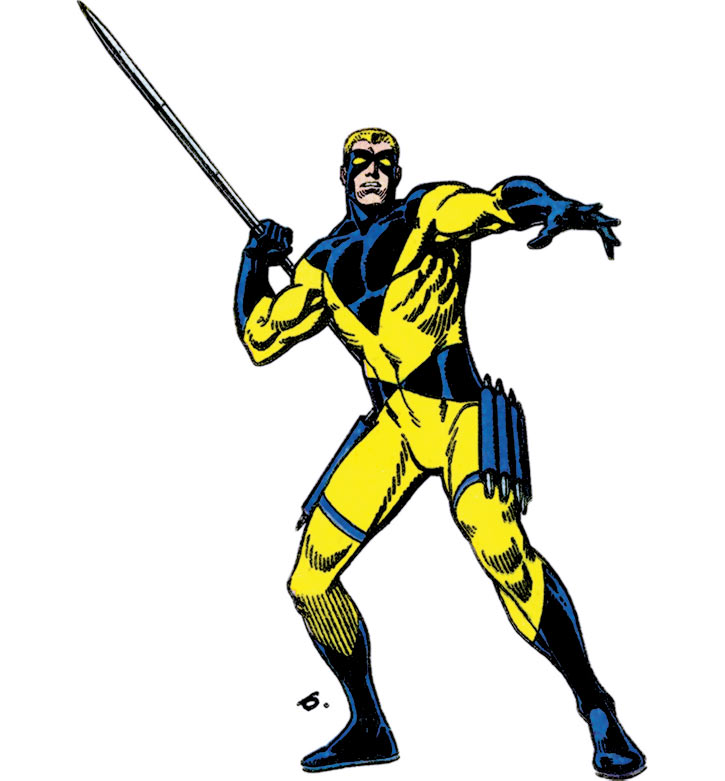 Early on Javelin also had a lab to work on his gadgets. He further had means of remote surveillance (presumably tiny video cameras) that could be monitored from the lab. The lab was hidden under a junkyard not too far from Ferris, and may have been built specifically for this operation.

This base may have been provided by the Monitor. One further suspects that it was the Monitor who told Javelin to pack such an unlikely weapon as javelin painting things yellow, and suggested building a missile using the stolen engine

Javelin is an exemplar of a 2000s DC Comics editorial practices, where minor villains keep getting graphically killed and coming back with no explanations. 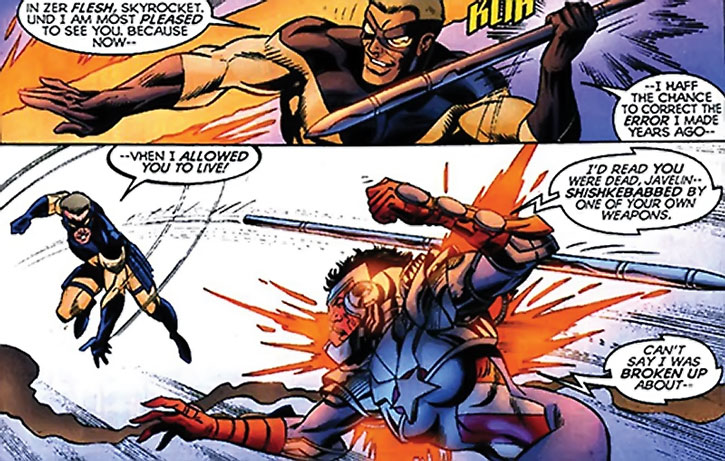 Given these incidents, we have little choice but to assume that he has a super-power allowing for his survival. The simplest No-Prize Hypothesis  is that it was granted to him by the Monitor.

The Monitor did equip various agents with super-weapons – such as the Demolition Team. Thus, one naturally assumes that it was also the case with Javelin’s weapons. But in our proposed No-Prize Hypothesis, Javelin always was able to build his own super-equipment. What he obtained from the Monitor was some sort of nanotech life-saving, wounds-repairing swarm.

For some years before the Crisis, the Monitor meddled with superhuman activity on Earth from his cloaked satellite. Back then, it seemed as if he was some sort of fixer for costumed criminals. Or perhaps a weapons dealer for supervillains. His actual plan, as it later turned out, was to test heroes and to gain favour with some villains for the incoming Crisis.

One criminal whom he worked with is Javelin. As with some other Monitor agents, Javelin was hired in 1984 by Congressman Bloch as part of Bloch’s vendetta against Ferris Aircraft. Then he was sent to attack the aerospace company.

Javelin stopped a Ferris semi. He took out the drivers and called in his men to steal the high-performance solar jet engines the truck was ferrying. When Green Lantern (Hal Jordan) intervened, Javelin was surprised by his opponent’s power. But he produced a suspiciously appropriate weapon – his yellow javelin. This projectile allowed him and his men to escape with their loot.

Though he had been hired to just destroy the solar engine, Javelin repurposed the engine to propel a large yellow missile and destroy Ferris Aircraft. Green Lantern defeated Javelin, but that was a diversion to let the rocket take flight. Nevertheless, GL did stop the yellow missile.

At an unclear point after that, Javelin fought and defeated super-heroine Skyrocket during one of her early outings.

In 1988, Javelin was recruited from prison to join the Suicide Squad. Back then it was under Amanda Waller’s command. However, Javelin was deployed in a mission she did not authorise. Rick Flag went rogue to rescue captured agent Nemesis (Tom Tresser) in the USSR. He lied to Javelin, telling the yellow-clad villain he would be set free after the mission

Beyond Javelin, Flag’s force included a number of Squad mainstays such as Deadshot, Captain Boomerang, Duchess and the Bronze Tiger.

The Justice League International was scrambled to prevent a serious international incident, and the situation escalated into a brawl. During that fight Javelin was handily defeated by the force field-clad Booster Gold.

What happened to Javelin next is unrevealed. But in 1991 he was again seen among the roster of the Suicide Squad. 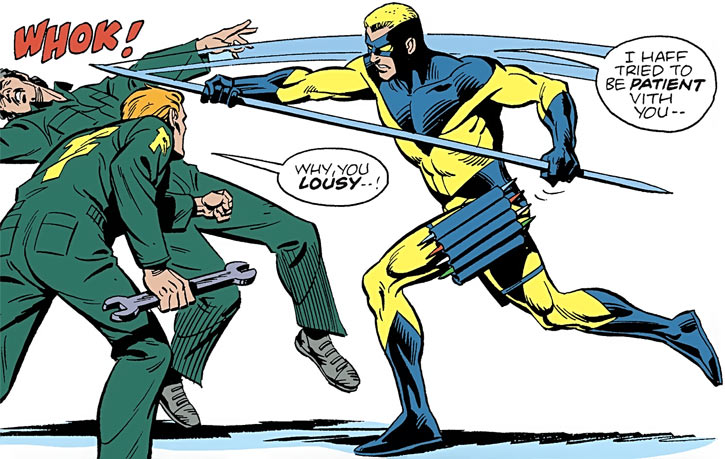 This time the client was Black Adam. He contacted Waller to round up footsoldiers to storm Circe’s lair and put an end to the ongoing “War of the Gods” crisis . Waller assembled a motley crew with Suicide Squad veterans such as Javelin, minor heroes, lowlives, the Captains of Industry and so on.

She then organised a mission to invade Circe’s island fortress. There they would engage the werebeasts and Bana-Mighdall Amazons protecting the enchantress. Javelin ended up accompanying Nightshade, who had orders to stick close to Black Adam. As such he was part of the group who stumbled on the sorceress.

Javelin impulsively threw a javelin at Circe. But the witch took control of it and had it chase Javelin around, eventually impaling him and seemingly killing him.

In 2002 he came back, once again accompanied by four Germanophone men with colourful uniforms, laser pistols and sky cycles.

They attempted to rob a bank but were intercepted by Skyrocket, now much more experienced than during their previous clash. She dispersed the four henchmen, and Javelin engaged her in combat. Javelin managed to briefly defeat her with an EMP javelin. He was about to kill her to restore his reputation when she managed to knock him out.

In 2005, Javelin was contacted by Firebug, who had himself been hired to assemble and lead a group of costumed criminals who had a beef with Deadshot. Apparently, Javelin blamed Deadshot for abandoning him to die on Circe’s island. During the clash with Deadshot, the marksman shot and detonated the explosive javelin that Javelin was about to hurl, seemingly killing him.

In 2006, Javelin was recruited by Mirror Master for a special operation. The goal of the assembled villains was to launch a fake Suicide Squad mission. They wanted to destroy Amanda Waller’s remaining political capital as a revenge. Since Javelin still resented Waller for not clearing up his criminal record after the unauthorised mission in the USSR, he joined. 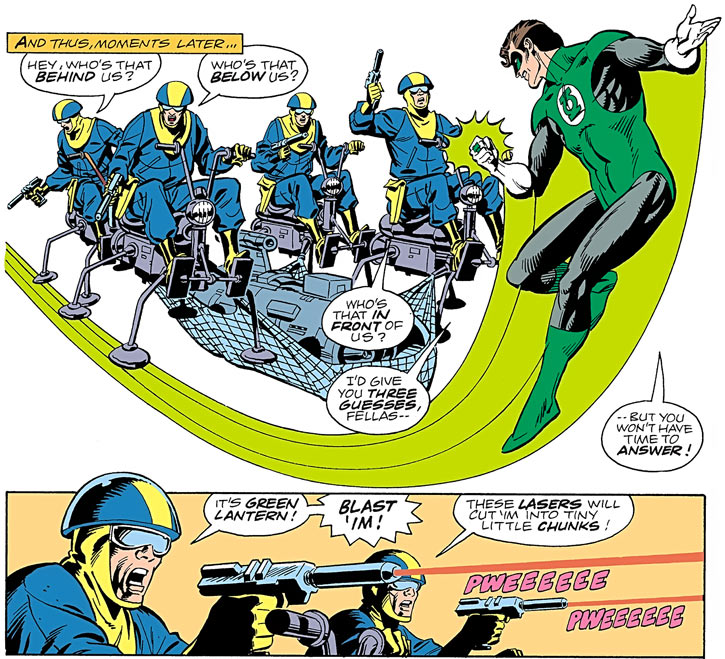 The operation almost immediately went to the dogs. The Society hadn’t authorised it, and intended to make an example to keep other criminals in line. As soon as Mirror Master’s group got in, team member Punch was shot dead by waiting troopers.

Javelin attempted to protect Punch’s wife Jewelee, who was going hysterical over the death of her husband. Though he managed to drag her out of the kill zone and push her out of the way of a runaway Jeep, he was himself hit by the Jeep. The impact broke his neck and seemingly killed him.

In 2009, Javelin and other C-listers were recruited by Prometheus, as part of an effort to delay a Justice League task force hunting him down.

The group of villains Javelin was with was handily defeated by Green Lantern (Hal Jordan) and Green Arrow (Oliver Queen). Javelin briefly recovered consciousness and lashed out, but was stopped by Supergirl. Oddly enough, nobody murdered him.

The Javelin often speaks with a ridiculous, over-the-top Hollywood German accent. But at other times no accent is visible in his words balloons. A reasonable explanation is that he does it on purpose because he thinks it’s funny and a part of his image.

Though he’s a professional, Javelin seems to put his heart in his job. He always goes that extra mile.

For instance, when hired to damage Ferris Aircraft by stealing an engine, he decided to then use the engine to power a missile that would destroy Ferris for extra credit. When confronting Skyrocket, he decided to have a proper super-villain/super-hero fight with her rather than go right ahead and try to kill her. During the duel he evidenced a certain sense of tradition and fair play.

He does seem to slightly hesitate to strike women, though he will do so when necessary. Furthermore, he doesn’t inflict pointless collateral damage, or kill casually.

Javelin also has a temper, though. If insulted, annoyed, etc. he’s likely to attack in anger. As a result, he will likely commit a tactical blunder.

Another of his problems is that he talks an awful lot, enjoying grandstanding, making threats, delivering villain dialogue, etc.. It is possible that the exaggerated German accent is part of that.

“Zhat is as far as you go, mein Herren. You vill stop your truck und surrender zer contents immediately – or you will suffer zer consequences !”

“You were given fair warning, mein Freunden — you vill not be warned tvice ! Now you vill suffer zer wrath of…. the Javelin !”

“I’m getting sick and tired of hearing your screeching voice echoing all over that stupid castle ! […] Let’s see how loud the witch can be with a javelin down her throat !”

Bonuses and Limitations:
Invulnerability takes one hour (10 APs) of time per roll.

His colourfully-costumed henchmen had soldier-type stats. They all speak German (but not always English), know how to ride skycycles, and are trained to operate and maintain advanced tech devices.

They are issued unusual equipment : 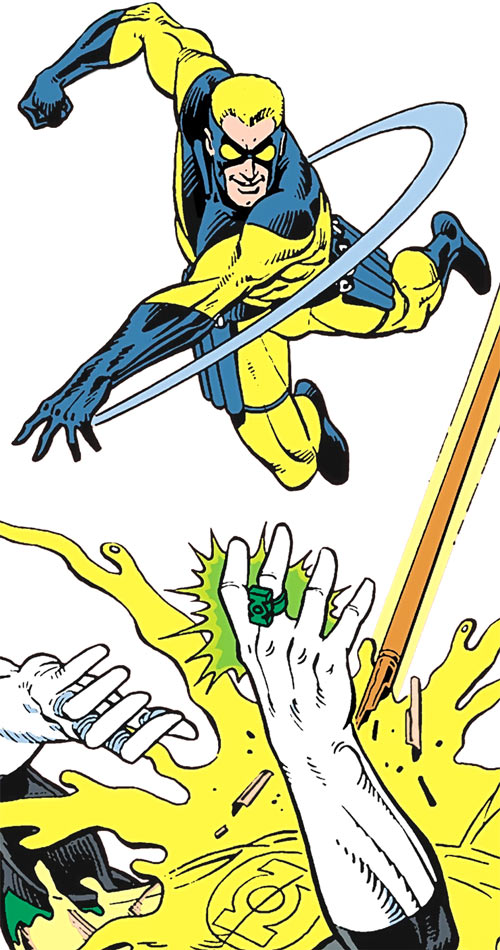 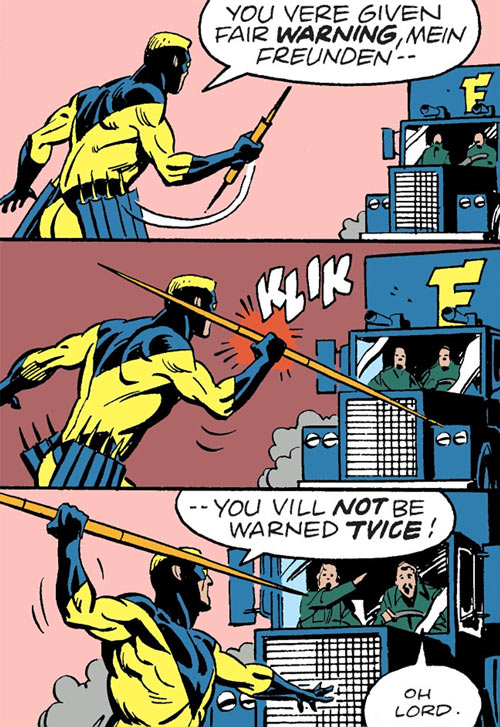