Crossgen was one of the new super-hero comics publishers that emerged during the 1990s. But that was years after the big wave with Image, the Ultraverse, Dark Horse Heroes, etc..

Javi’s Sigil allowed him to heal others with a touch, or enhance their natural powers, also with a touch. This boost also helped them overcome the damage that using their powers in the Negation Universe could cause.

The Sigil also made him hard to kill, allowing him to recover from seemingly terminal amounts of damage.

After being taken in by Charon, his powers expanded. He could now use them without being in direct contact with his targets. He now also could drain the life force and powers from others, even Evinlea.

Raised on an intensely religious planet, Javi became a doctor. But he soon lost his belief in a higher power.

When a mysterious patient with orange eyes touched him, leaving a strange Sigil on his arm, he found he could heal others with a touch, even boosting their natural abilities.

Javi was abducted to another universe, where he found himself stranded on a planet with 99 other individuals from various parts of his own universe (the Bright Universe as the residents of the Negation referred to it). Many of the powered prisoners found that their powers didn’t work properly in this new universe, sometimes backfiring disastrously.

Not only did Javi’s work fine, but his boosting also made them immune to these dangerous side-effects. This soon brought him to the attention of Evinlea, of the godlike First, the most powerful of the prisoners. Her personality overwhelming him, she took him as her lover. Javi helped her establish herself at the top of the developing hierarchy among the prisoners.

One of the powerless prisoners, Kaine, convinced her that they had been brought here for testing by hidden observers. Evinlea eventually acquiesced to his tactical abilities, commanding the rest of the prisoners to follow his lead.

His lead led their captors to bringing them into the prison proper. But there the commander, Komptin, knew to separate Evinlea and Javi after her initial outburst, putting Javi in solitary.

He was freed when the prisoners made their escape. Seizing a craft, it lifted off before most of the prisoners were aboard. With Javi’s help, Evinlea managed to take herself and a few others off planet in an air bubble just before the Negation destroyed the planet to try to stop their escape, and they were rescued just in time by a passing vessel.

They stumbled across the other group of escapees a short while later on a lifeless planet. Evinlea immediately attacked them for their perceived abandonment. She found herself outmatched though, and when Javi refused to help her for her refusal to listen to reason, she tried to use her powers without him, destroying her hands in the process.

Javi healed them, and the hostility was cleared up as being due to the stolen ship’s automated systems.

Before they could decide on their next course of action, they were attacked by Lawbringer Qztr, one of the elite of the Negation. He easily handled even Evinlea. When he appeared about to slay the baby Memi, Javi dove to rescue the child, Qztr’s attack blasting a hole through his chest.

Apparently dead, Javi was buried with the other victims. But his Sigil kept him alive, healing him.

He was pulled from his grave by Charon, who needed his aid with his attempts to create his own Sigils. He showed Javi the labs where he branded his volunteers, and where they died horribly moments later, explaining that it was due to his trying to adapt something that had been designed for human physiology.

He ordered another volunteer, Shrakti, into the chamber, and when she emerged, Javi’s desire to save lives forced him to heal her, as Charon had intended. Reluctantly Javi became leader of the small group of Sigil-bearers, intending to turn them against Charon.

They were quickly dispatched to quell a rebellion. Javi had to use his powers to assert his control over the group, who believed him too weak and untrustworthy.

A group of Lawbringers soon arrived, curious of these new agents of Charon. Javi managed to get them to reveal their history, in exchange for telling them why Charon had created the Sigil-bearers, which he didn’t actually know.

Learning that another being of similar power to Charon, Appolyon, existed, he got the Lawbringers to open a portal. This allowed them to travel to the dimension  where he had been banished.

Meeting Appolyon, they learned Charon’s true history. His Sigil-bearers were disillusioned to learn that he had once been human. Appolyon gave them what he claimed to be a bomb that can destroy Charon, and they returned to the Negation Universe.

Still unconvinced of their course, the team flitted around the universe, with Javi showing them the damage that the Empire has done.

Tibian accused him of bias, and insisted they travel to his home world. But they discovered the locals being rounded up by the Negation Military, so that a tenth of the population could be executed. Enraged, Tibian killed the soldiers, and the team agreed to turn on Charon.

They were soon sent after Javi’s former colleagues, still on the run. They tracked them to a backwater planet where they were getting supplies. Drawing Evinlea away from the others, she was taken off-guard by Javi’s appearance. He managed to drain most of her power, presenting more of a threat when the rest of the prisoners appeared.

The battle was soon in full swing, and Javi uses his powers to heal and bolster his team, giving them the edge. But Gammid realized that Javi’s powers all come from the Sigil on his arm, and so got Kaine to shoot the arm off. Disarmed, Javi was killed a moment later.

Originally a caring and compassionate individual, Javi used his powers to help others. He was initially overwhelmed by Evinlea’s personality, and gave her the stability her powers needed in the Negation Universe, although he did begin to resist her self-interest towards the end of their time together.

His upbringing seems to have left him with strong religious tendencies, despite his abandoning it, possibly explaining (in part) his attraction to Evinlea, and his apparently quick conversion to worshipping Charon, as though during this chaotic period he’s looking for the god he lost years ago.

Following his marking by Charon, he initially tried to resist and find his freedom, but was eventually broken, becoming an ardent worshipper of Charon. When he met his fellow escapees again, he was a ruthless fighter, using every method at his disposal to kill his former friends.

“I found God. And his name is Charon.”

Drawbacks:
MIA (Serve Charon), Loss Vulnerability (All powers lost if his arm is removed above the Sigil).

After arriving in the Negation Universe, he gained the Involuntary Exile and Mistrust Drawbacks, and the Language Advantage. But he lost the Drawbacks once he became an agent of Charon.

Prior to this event he had the Upholding the Good Motivation, his Damage Transference and Enchantment had Ranges of Touch. And he didn’t have Energy Absorption, Power Drain, Regeneration, or Vampirism. 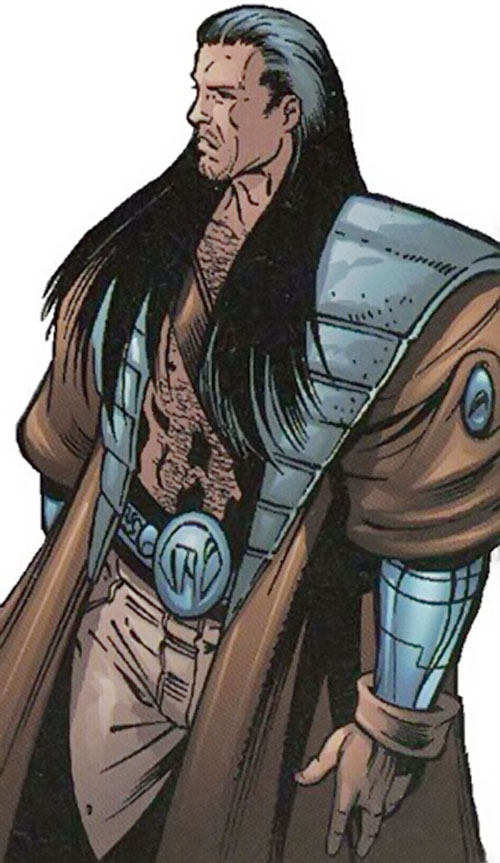 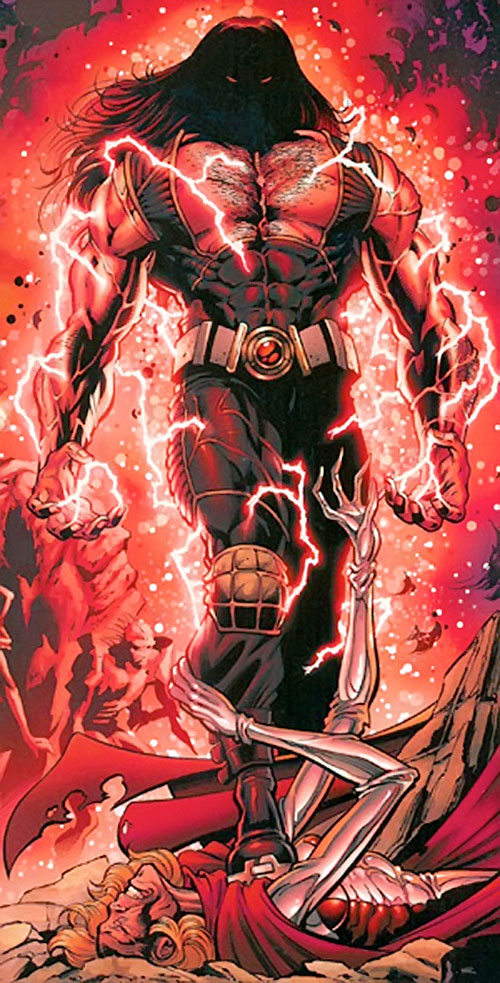