The Jawbreakers are remarkably skilled motorcyclists. They can manoeuvre at high speed in confined surroundings, perform unusually sharp slide turns, stay on their bike in difficult conditions, etc..

They are also adept at mounted sword strikes, and seem to know some kenjutsu for when they’re dismounted.

When seen, they rode stolen prototype crotch rockets. These were taken from an university robotics lab. Apparently, these are loaded with software that adjust the engine’s working and the exact shape of the chassis in real time for maximum performances. These also have jet boosters, presumably for enhanced acceleration.

Both Jawbreakers have a katana, an integral helmet and kneepads.

The Jawbreakers are a pair of cosplayers. Their characters are from an old (fictional) animé  – Science Battle Hero Nuclea, which was translabutchered in the US as Atomina. The heroine of this cartoon is a girl robot who evokes classics such as Astroboy or Megaman/Rockman.

The Jawbreakers are, in the cartoon, enemies of Atomina. They seem modelled after bōsōzoku (outlaw biker) gangs as they were during the early 1980s. But with a much more punk-like look… and pastel colours.

By 2014, Atomina was obscure. It apparently never was very popular.

In their local animé  enthusiast community, the Jawbreakers are known for always being in-character. This makes them unpopular despite their devotion to their craft. Since the Mouth-Death Twins are brutish thugs who always try to intimidate people.

In 2014, the Jawbreakers were contacted by somebody claiming to be Batgirl. A half-mil just showed up on their bank account, with a promise that they’d get another once Batgirl would be dead. 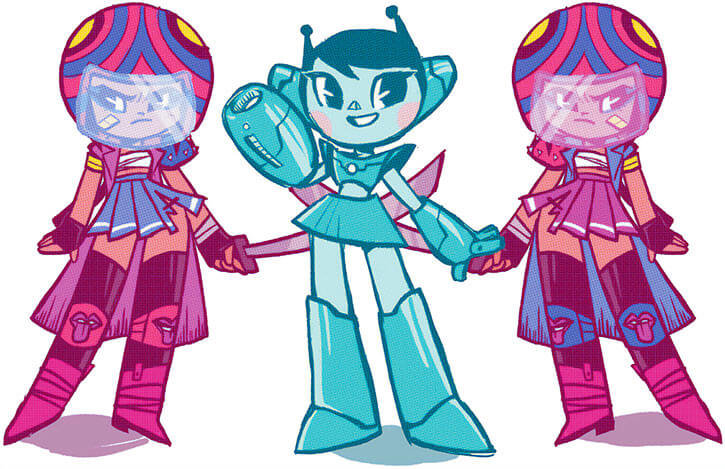 They then received assistance in stealing a pair of high-tech bikes. The latter apparently are what convinced them to go with the contract.

Batgirl (Barbara Gordon) twice clashed with the Jawbreakers. During the second fight she became overwhelmed by the bikes’ speed.

But her perfect memory allowed her to recall that Atomina episode (which she had seen at age 7). She thus managed to take down both riders using her grapple line gun, much like Nuclea had done in the animé.

A year later, they participated in The Fugue (Vinton Burwell)’s attack on Batgirl. However, the Jawbreakers were easily taken down by Spoiler (Stephanie Brown) and Bluebird (Harper Row).

The main illustration is concept art by the series’ artist, Babs Tarr .

They’ll normally be in-character as angry, cruel thugs. Though as far as we can tell, it’s also their actual personality. They like to threaten and intimidate.

Whenever it’s vaguely relevant they’ll cry “Tomorrow cries danger !”. This was apparently the Jawbreakers’ battle cry in the cartoon. Yes, it very much sounds like poorly translated Japanese.

Jawbreakers (both have the same stats)

Powers:
Sort of. See below.

The DEX and Weaponry values of the Jawbreakers greatly increase if their bikes give them a speed advantage over their opposition.

Technically, they have high scores with a complex Loss Vulnerability lowering it when they’re not mounted. For clarity’s sake, we’ll present it the other way around :

Thus, they are capable of engaging even high-end fighters. They could force Batgirl into a full defensive posture — Dodging and burning Hero Points — since the bikes were just too fast. 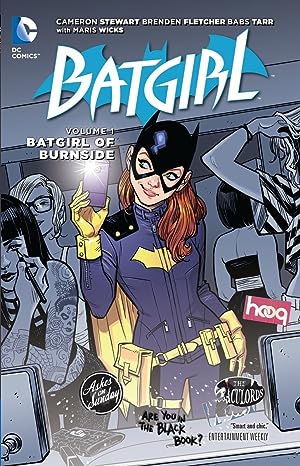