Her undead state also means she hasn’t aged in the centuries since her death.

She can sense when someone nearby is going to die, her eyes going black.

She can also transform into her full banshee form, similar to that of the Silver Banshee. In this state she can unleash a scream causing those around her to endure the moment of her death. The strain of this attack has been enough to knock Wonder Woman out, and may kill weaker targets.

(A general history of the Secret Six can be found in the team entry.)

Of the lower gentry, with a Hungarian father and a French mother, Jeanette was born around the beginning of the XVIIth century. Her parents used what little wealth they had so that the nine year old Jeanette could learn the manners of the court from Countess Elizabeth Báthory .

Báthory turned out to be a depraved serial killer. She had her four other assistants force Jeanette to watch her crimes. Báthory told Jeanette she was her favourite, and would be her last victim before she died.

Báthory’s crimes eventually became exposed. But whereas the other assistants were executed, Báthory and Jeanette were of the nobility. Báthory was sentenced to end her days locked in a single room. Jeanette, unable to speak at this point, was allowed her wish to serve Báthory. She brought her meals, and cleaned up after her.

This enabled her to serve a sprinkling of glass dust in the Countess’ food every evening. Báthory took years to die.

The survivor, the murderer

Her later history is slightly vague. It’s known she was executed following her husband’s betrayal. The botched decapitation required several swings. This resulted in her becoming a banshee. 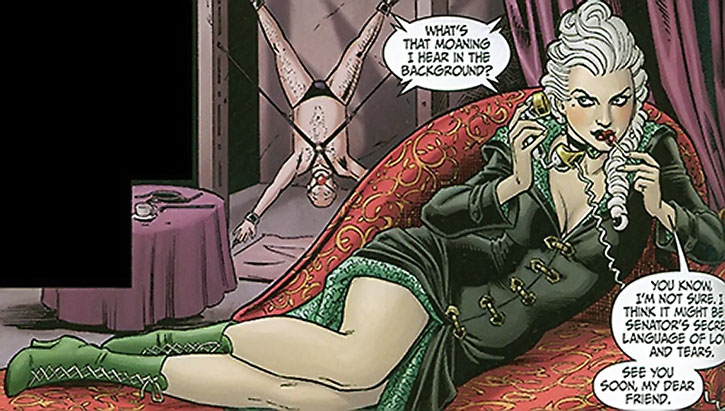 There’s also a reference to her first husband being a “mad dog killer who pretended to be a soldier. Pretended it was for the money”. Jeanette claims to have thrown him to his death off a cliff in Ireland. Whether this is the husband who betrayed her is unclear, since he doesn’t seem to match the genteel society Jeanette appears to have been part of at some point.

She’s stated she spent time imprisoned in Kilmainham gaol , and the gulags . But little else has been revealed of her life over the centuries.

Living above her Las Vegas casino hotel, the Nocturne, Jeanette accepted her old friend Scandal Savage’s invitation to join the Secret Six. That was mainly to escape her boredom. It quickly brought a small army of super-villains to her place, offering the distraction she sought.

She developed an instant attraction to team mate Deadshot. Jeanette suspected that it was due to the amount of death he’d caused, drawing the banshee within her. Despite coming to blows, and betrayals, they maintain a twisted kind of relationship.

Despite her dislike of Amazons, Jeanette was unwilling to see them incarcerated. She had developed quite a dislike of prisons. She had trouble containing her dislike of the Amazons though. Thus, when Wonder Woman arrived to free them, Jeanette antagonized her rather than trying to work with her.

After Wonder Woman knocked her about a bit (although Jeanette was able to draw blood with a punch), she switched to her banshee form, knocking Diana out for a time with her wail.

Cats in the Cradle

Jeanette exhibited no interest in helping Catman. She stuck with Bane in fulfilling the obligations of the jobs the team had already accepted.

Aristocratic, world weary, and unflappable, Jeanette is difficult to shock.

She joined the Six mainly due to ennui, looking for something to enliven her immortality. Yet she is strict in fulfilling her obligations to the team. She appears fairly detached, her relationships with the others having a degree of distance to them, even with those she’s closest to.

She’s usually on the front line of every fight.

She dislikes Amazons, whom she sees as having abandoned women to suffer for centuries while they hid. But she hates prisons more, not even willing to see an Amazon suffer such unjustly.

She also seems addicted to lollipops, often having one to hand.

She can suffer flashbacks after coming close to decapitation, even just a nick to her neck. If so, Jeanette will collapse as she relives her death.

[Regarding the ice cream truck they’d been using] “Darlings, I am perfectly willing to die on this insane mission of yours. Shot, eaten, abused, malnourished and without proper butlery, certainly. But I am not riding across country in that.”

“We are born in pain, and we inflict our revenge on others our entire lives.”

Deadshot: “Hey, I done time more‘n once.”
Jeanette: “Ha ha ha ! Yes, Belle Reve, the beautiful dream. An American prison with furloughs, yes ? Shall I tell you of Kilmainham gaol, dearest ? Where I was kept in a basement cell for two years with no room to lie down, as the sewage from the entire prison washed across my feet every night ? Shall I tell you of the gulags, where icy starvation led to my first taste of frozen human flesh ?”

“The child I was born, for all the things she had done, she left me as I waited to die. And I found the banshee.” 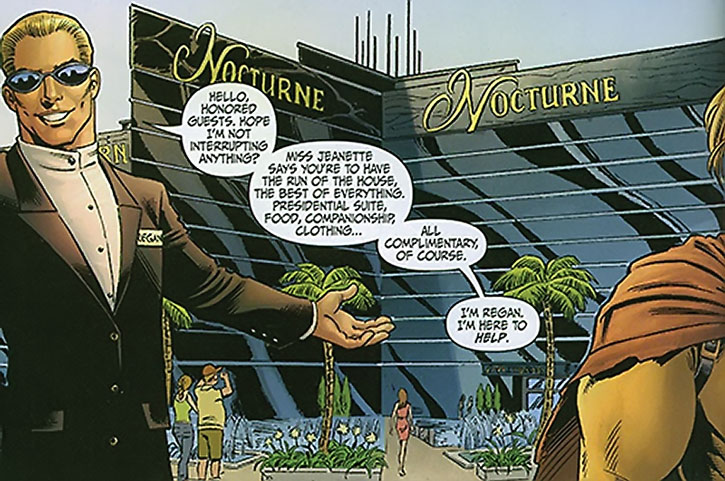 Catman: “What is it with you and Amazons, Jeanette ?”
Jeanette: “Banshees don’t care for immortals at the best of times, Thomas. They make us somewhat… irrelevant, I suppose. But 3,000 they stayed on their little tropical island while women were treated like cattle all over the world. A few less of them won’t cause me to shed any tears, I’m afraid.”

Jeanette: “Just put your weapons down.”
Deadshot: “Um. Sweetie-pie cookie-pus…? What happens if we don’t drop our drawers, as it were ?”
Jeanette: “Don’t you know, shootist ? Then I bend your body into a series of right angles against the best intentions of God and nature.”

“I smell that his death is very near.”

“The executioner was drunk. I paid him with the only jewelry they let me keep. Mother’s necklace. His ax was… imprecise. The first blow cracked the bones in my left shoulder. The white dress I wore soaked red with my blood. With each missed killing stroke, the crowd cheered and laughed. For them it was good sport. For me it was pain and terror so deep that I lost everything I was. To kneel, bound at the hands, in my befouled undergarments, and know the butcher wasn’t finished. There were three more misses. He stopped after the third blow, for a drink of water, and to pantomime his fatigue for the crowd. Swinging the axe was tiring, you see. That was his excuse. The child I was born, for all the things she had done… she left me as I waited to die. And I found the Banshee.”

“I’ll die before I willingly go to prison again, darling. I’m sorry, it’s too late for us to straddle that line again. There’s no redemption for us. We’ve come too far. We’re not heroes, my love. We’re not even good people. We’re the villains in this story, Scandal Savage. And it’s time to quit fooling yourself about that.”

As a banshee, Jeanette is able to sense when someone nearby is going to die. While this is modelled by Precognition, she has no way of controlling it, so it’s up to the GM when she has such visions, and what information they provide. The visions leave her distracted and unable to act for a Phase. 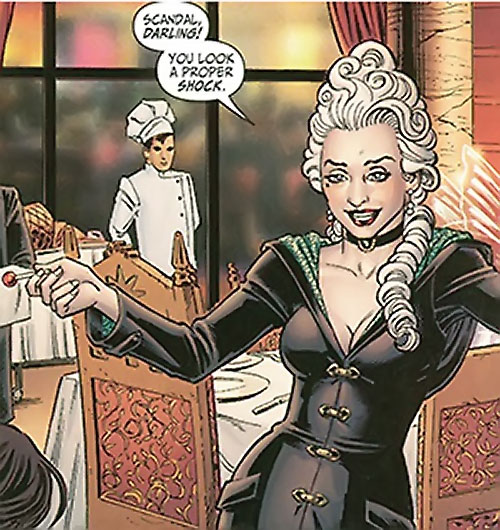 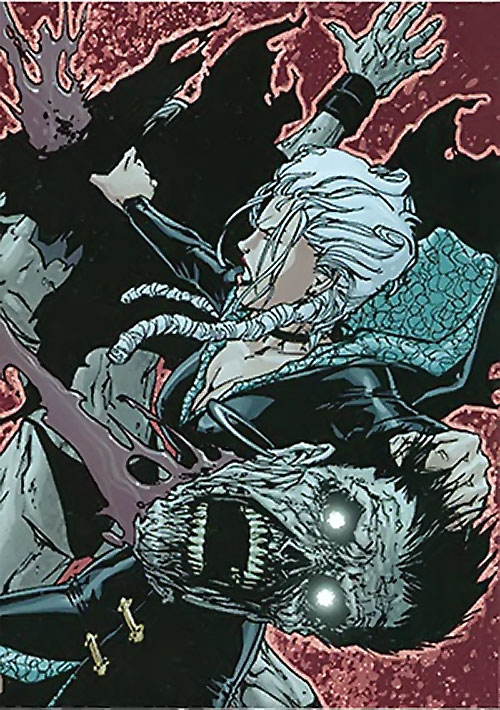 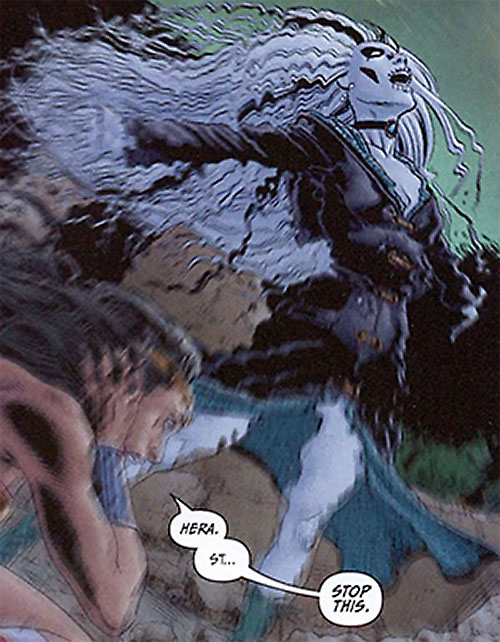