Like many beasts, Hyde has sensory perceptions beyond those of civilized people. His brobdignagian build allows him incredible strength and durability, sufficient to batter down thick steel doors in a single blow. In combat he eschews any sort of weaponry, preferring to slaughter his hapless foes with his preternatural strength.

Henry Jekyll is a frail man, unremarkable on the surface save for his wits and his skill with chemicals.

Dr. Henry Jekyll was a chemist of profound talent. He found himself drawn to the possibilities of separating his darker half from himself through the use of special elixirs. Instead, his potion changed him into a squat subhuman brute who took the name Edward Hyde.

After Hyde engaged in a number of horrific crimes, Jekyll faked his own suicide. Details on this point are sketchy and may amount to little more than a note proclaiming suicidal intentions. In any case, he fled England for Paris.

While in Paris he discovered to his dismay that his potion was no longer needed to effect his dreaded change. Now, any stress would do. To make matters worse, Hyde was increasing in stature while Jekyll withered. Indeed, by now Hyde’s build had by now reached superhumanly large proportions.

Over the next two months Hyde would be responsible for a variety of depraved crimes, including the murder of “Nana” Coupeau , a streetwalker of some repute.

Hyde subsequently drew the attention of the authorities, was captured and then subsequently inducted into the League of Extraordinary Gentlemen. The details of the arrangements made to secure Hyde’s service are sketchy. This is especially notable given his contempt for initial offers such as a cure for his condition and amnesty for his deeds.

However, Hyde did admit to some of his colleagues during the Martian invasion that he feared the ultimate effect of his and Jekyll’s condition would be their mutual deaths. This may mean some form of cure was sought by Hyde.

Having joined this collection of monsters in the service of Her Majesty, Hyde toiled. He assisted in the foiling of the dreaded plans of two great crime lords as they battled for dominion of Fair Albion and eventually the lands beyond.

No sooner was this dread task complete than the League was called upon to meet the menace of the Martians. Despite his bestial might, there was little Hyde could do to foil the monstrous aliens.

War of the worlds

Thus, he was reduced to bearing witness to the Martian’s rampages across the British Isles and eagerly anticipating the day he could unleash his rage upon both the fell invaders and the Judas Mr. Griffin, who had betrayed the League to the foul alien fiends.

Like any other criminal returning to the scene of his crimes, Griffith stole into the League’s headquarters to further his craven betrayal. He had not counted on being exposed by Hyde’s beastly senses. Thus, he suffered a death as ignominious as it was brutal at Hyde’s filthy hands.

The aftermath of Griffith’s shuffle from the mortal coil was so grotesque as to incite Captain Nemo to violence. But his hand was stayed by a companion who rightly warned Nemo that Hyde could easily kill him as well.

Nevertheless, Hyde soon met his nemesis. The valiant British Army had prepared an artillery bombardment with shells loaded with a hybrid disease created by the infamous Dr. Moreau . Yet the evil Martian Tripods were advancing on the London Bridge and would cross it before the countermeasures had been readied.

Realizing he’d be dead either way, Hyde volunteered to delay the Tripods at the cost of his own life.

After securing from Ms. Murray a kiss and a feel of her bosom, Hyde danced a jolly polka toward the enemy lines and was greeted by their fearsome weaponry. Persevering despite horrific burns inflicted by the lead Tripod’s heat ray, Hyde dismembered the Tripod and fell upon its occupant, dining gruesomely upon the alien fiend.

He then met his utter immolation by the full might of the dread invaders.

Hyde had managed to save the day, however. His delay allowed the army to carry out its attack. After the Martian menace had been brought to an end, Serpentine Park was renamed Hyde Park in honor of the misanthrope’s final sacrifice. It also became home to a statue of Edward Hyde sculpted by noted artist Jacob Epstein .

Hyde is a gigantic subhuman much like the neanderthals of archaelogists’ fancy. His enlarged canine teeth further betray his bestial nature. The strain of Hyde’s epidermis’s struggle to cover his enlarged frame is particularly evident in the torn, scarred flesh of certain regions such as his cheeks.

He bears the marks of previous battles that all such creatures of such savage bent inevitably suffer. This most notably includes a mutilated right ear from a glancing pistol shot.

Jekyll is a small-framed sallow Anglo-Saxon gentleman. His perpetual look of anxiety is exaggerated by his poor complexion. The unfortunate doctor also bears the marks of the beast, for Hyde’s wounds are mirrored in Jekyll’s own flesh.

Hyde is a violent misanthrope, but very cunning all the same. While he seems perpetually on the edge of violence and in battle conducts himself in the manner of a savage, his self-control is actually quite profound. He can shift from homicidal psychopath to an erudite, cultured demeanor in a heartbeat.

It is not uncommon for Hyde to refer to others with various racial and cultural slurs. But these seem intended to incense others rather than to express any true standing prejudices of Hyde’s, as he hates most everyone equally.

It is likely that some of Hyde’s verbal grotesqueries are examples of Dr. Freud’s famous psychological defense mechanisms. They repel others so that Hyde does not have to suffer the negative self-images spawned by others’ fear and hatred of him.

Hyde is a sly brute in other ways as well. For example, he concealed the knowledge that he could see Hawley Griffin (a.k.a. the Invisible Man) with his inhuman eyes until their final confrontation.

Hyde’s nigh-universal feelings of antipathy towards others have one significant exception in Mina Murray. The beastly thug has mused at times that he feels he should simply rape and behead Mina, but then feels he would be compelled to take his own life next.

He finally concluded that what makes Mina unique is that unlike every other person Hyde has encountered she does not hate him. Perhaps this is because she has encountered someone even worse than he. In return, he cannot find it in his small, twisted heart to hate her. He even tries to shelter her from certain unpleasantries (such as the manner of Griffin’s final disposal) when he can.

Whether it is as simple as that or if Hyde’s feelings run deeper is unclear. Howbeit his reaction to Griffin’s attack upon Mina was interesting — his burning rage toward the Martians became an even-more dangerous icy hatred toward the aliens and Griffin.

It is also telling that his last act with the League was to request two token physical affections from Ms. Murray. In essence, Hyde’s protestations that he did not feel love may have been meant in part to discourage wishful thinking on his own part.

Jekyll is a quiet man who spends much of his time fretting about the nature of his singular predicament. His laconic tendencies should not be mistaken for lack of intellect, for Jekyll is a rather sharp chap and often of a creative bent of mind.

Both Jekyll and Hyde have noted that Hyde was once much shorter than Jekyll was. Given that Hyde is now much larger than Jekyll and appears with greater frequency, there may come a day when Jekyll is absorbed entirely and only Hyde remains.

As Hyde explained to his companions, he is Jekyll’s passions without restraint and it was thus inevitable that he would continue to grow. Indeed, once he transformed at the beginning of the Martian invasion, he never again resumed Jekyll’s form.

“Of course it’s not Jekyll, you cretinous freak. I’m Edward Hyde. A pleasure to make your acquaintance, Mr. Griffin.”

“A CURE ? You’ll cure me, will you, like a wart on Jeckyl’s arse ? Why, you self-important little turd ! Unfasten these confounded straps. I’ll snap your neck in two !”

Mina Harker: “I had thought it your custom to repel companionship.”
Hyde: “Huhn. It’s just the darkies, opium-sots and snickering lunatics I can’t stand. You’re all right.”

Nemo: “Hyde, he’s only a child.”
Hyde: “I know what children look like, Nemo. I’ve often scraped them off my boots.”

(Discussing Nemo’s plans to slow the Martian advance through London)
Hyde: “Collapse the bridge ? With all those innocent lives ? Ohhh, Nemo !”
Nemo: “Do not mock me, horror.”

The League of Extraordinary Gentlemen could be dropped whole cloth into DCU History with minimal work. Hyde and his compatriots could be encountered by heroes of that time or by time-traveling heroes from other eras.

As a modern character, Hyde could make a useful bit-player in a criminal organization, perhaps joining them after his mishap and working as an enforcer with ambitions. Another possibility is a descendant of the original Hyde in a modern incarnation of the League, which had several historical antecedents.

Bonuses and Limitations:
Growth is Always On and Already Factored Into STR above (base STR is 8, Physical OV/RV with Growth is 4/9) (-1FC).

Drawbacks:
Uncontrollable Alter Ego (Whenever Jekyll is under stress he must make an opposed roll with Will as AV/EV and Mind as OV/RV — if he fails to get at least 1 RAP, he turns into Hyde. He can spend HPs on this roll. Jekyll can allow the transformation to occur unimpeded if he wishes.)

Hyde does not have Rage because he has no problem controlling his berserker tendencies.

Source of Character: League of Extraordinary Gentlemen vol. 1 & 2 by Alan Moore and Kevin O’Neill (comic book mini-series from ABC Comics), based in turn upon The Strange Case of Dr. Jekyll and Mr. Hyde by Robert Louis Stevenson (novel). 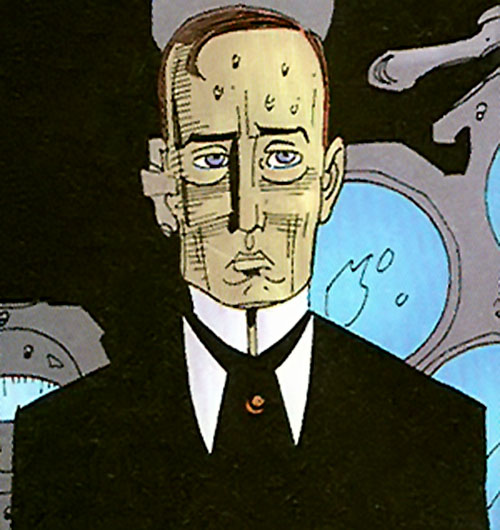 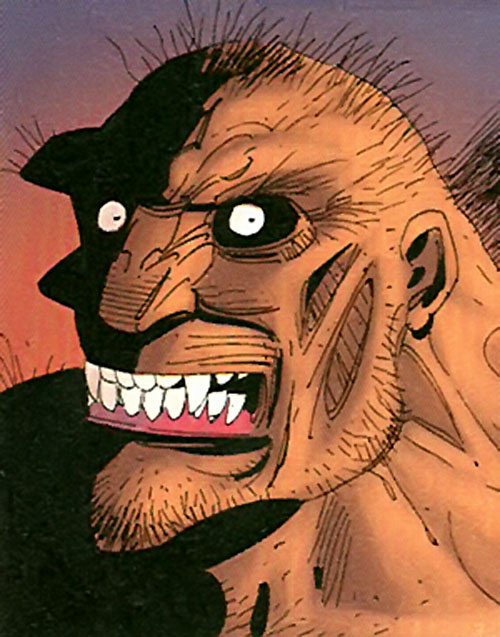 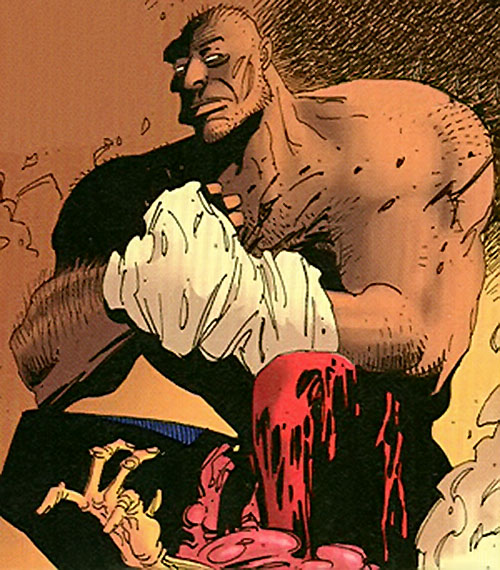 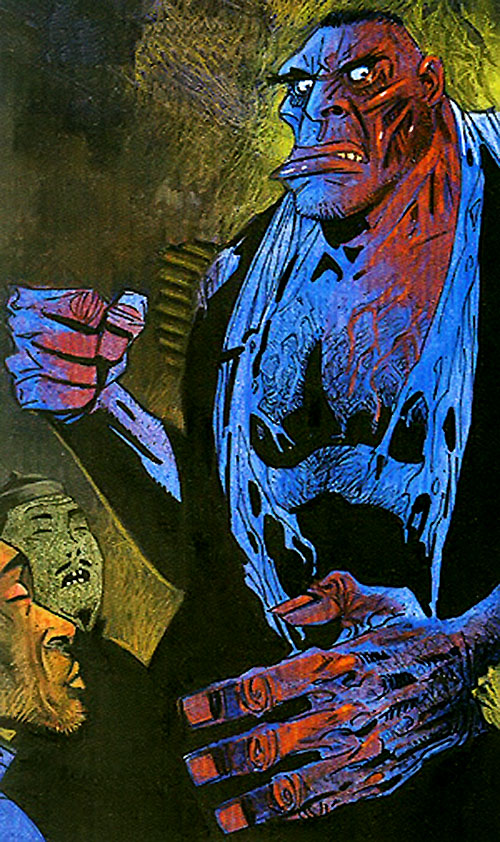