Jenny Sparks is la Fée Electricité , the spirit of the century. She can :

Without the presence of electricity, Jenny is powerless – but still dangerous. She’s athletic, and a highly experienced fighter and adventurer. Her Hero Points  total is significantly above the rest of StormWatch.

After the Despot crisis, the UN found itself facing a severe shortage in metahuman manpower. Thus, they recruited superhumans from all over the world. Jenny Sparks was among the second wave of new agents. She’s definitively not a rookie, and was recruited by the Weatherman himself.

Spirit of the century

Jenny Sparks was born with the century. She gained her powers and stopped ageing in 1919, when dimensional doors opened to an alternate universe called Sliding Earth. She’s been adventuring ever since, both in England and America. She was a characteristic comic book heroine for every decade, always defending her progressive dreams. Thus, Jenny became an urban legend in some circles.

She was part of most projects in Britain regarding ETs and alternative dimensions. She apparently saw several attempts at bringing the wonders of other worlds to Earth fail.

In 1982, something horrible happened (see Stormwatch #44, which is Highly Recommended for everyone who like comics). Afterward Jenny just slummed for 14 years, all illusions finally lost.

However, she recently accepted to put her incredible experience behind StormWatch and became the leader of StormWatch Black. She was not happy about joining StormWatch. But when the Weatherman promised her that he would attack the causes of crime, and not just the criminals, she agreed. She probably saw this as another shot at changing the world.

StormWatch Black is a semi-undercover op team working for the UN (composed of Jenny Sparks, Hawksmoor and Swift).

In the Wildstorm universe, the UN is at that point a menacing worldwide conspiracy led by gun-toting, paranoid “Secret Masters”. While they are heroes, the operatives of StormWatch (especially StormWatch Black) are thus quite ruthless. They do not hesitate do violate the rights of a country in order to advance the agenda of the UN.

More recently, Jenny Spark was the one who understood the madness of the Weatherman, and attempted to kill him. It is however probable that the Weatherman managed to flee.

As I understand it, Jenny Spark died on 31/12/00, while somewhere the spirit of the XXIst century was born.

Jennifer Sparks looks 19 or 20. However, she *feels* old and disabused. The eyes of a mature woman in a teenager’s body are a bit unsettling.

Jenny Sparks is a demolished woman. She feels old and tired. She pretends not to give a damn about anything other than smokes, alcohol, slumming and being foul-mouthed. She has lost utopia several times, fought too many battles, seen too many horrors and feels the world has gone right into the toilet.

Within StormWatch, she accepts to use a more constructive side of her personality. Tough, apparently ruthless, aggressive, with loads of battle experience and investigative and leadership skills. She still refuses any kind of discipline.

Her diction is evidently British, and not an upper-class one either.

Well, this whole “replacement” business is not so simple. If you’re dumping the Guardians as a whole and replacing them with these Image characters, then there is no need for a one-on-one replacement. Since the Guardians almost never had solo adventures of any significance.

If you want to replace some members of the Guardians with some of these Image characters, then it becomes more tricky. Someone who’s been around for about a century would not characterization-wise be similar to any of the Guardians except Dr. Mist. This Sparks character could possibly be a junior Dr. Mist, organizing the early foundations of the group. Or not.

Power-wise, she’d fit right in with/replace almost any of the point-and-blast members of the Guardians. In particular, Rising Sun is one of the few such members to show a similar degree of versatility with his powers.

However, since nationality is (in most cases) the most important aspect of each Guardian member, perhaps she would be better off replacing Godiva.

Drawbacks:
Guilt, MIA to chain smoking, MIA to alcohol, Loss Vulnerability (all powers except Energy Absorption in the absence of an electrical source within 06 APs). 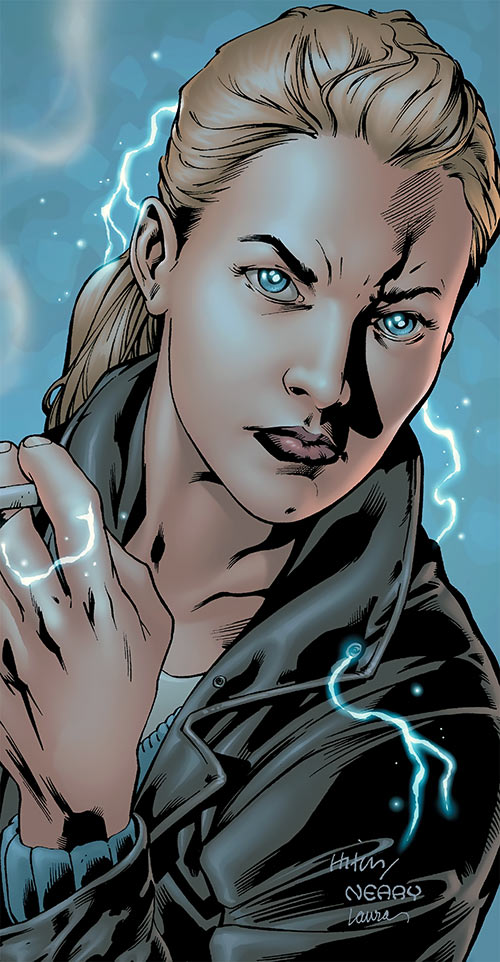