Mr. Jepperd is a big, strong man with a highly developed killer instinct. He just plain excels at violence – armed or unarmed.

Jepperd is usually fighting random civilian survivors with little or no combat experience or training. In DC Heroes terms, their Skills and Attributes are generally 02s.

Therefore, he can engage multiple armed men with excellent odds of prevailing. He knows exactly what he’s doing and never hesitates. They don’t and they do.

He seems to be operating on the level of an elite soldier, but can be defeated by a trained professional. Though when that happened he hadn’t eaten in days.

Jepperd has an amazing will to live. His body can thus endure and heal wounds with impressive vitality. He has been repeatedly likened to a cockroach – he just can’t seem to be killed, even when he dearly wants to die. Even in bad conditions, his wounds heal cleanly and will not leave permanent damage.

Tommy usually has some weapons – what seems to be a .45 semi-auto pistol or two, and what I assume is a .30-06 bolt-action hunting rifle. He doesn’t usually have a melee weapon, since he can reliably kill people with his bare hands.

Mr. Jepperd usually travels on horseback, as a lone rider.

Tommy Jepperd is just muscle. All through his life, he’s only ever been good at physical conflict. He was famous as a ice hockey player and became the captain of the Minnesota Wildcats .

In his youth he was apparently nicknamed “the leopard” by fans, as a pun on his last name and the name of his team.

Having no other professional skill, he played well past his prime. However, a combination of age and his nasty temper made it clear that his career would end on a sour note. 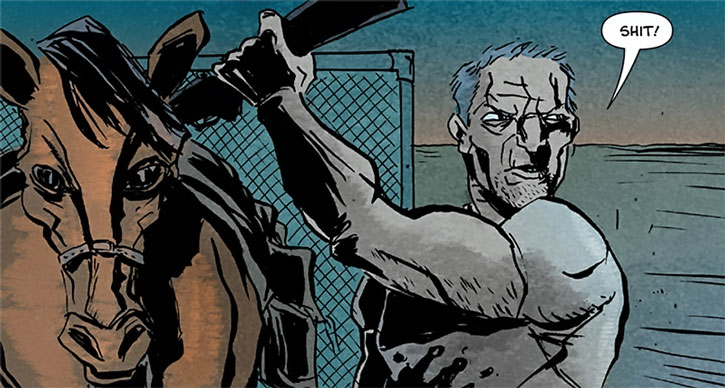 His brother Wayne was hired by the elderly Mrs. Powell after her husband died, to help with the farm. During the off-season Tommy would join Wayne to work the fields.

When Mrs. Powell became sick, her daughter Louise came from New York City to care for her during her last months. Though Louise wasn’t interested in remaining in rural Minnesota, she and Tommy fell in love. That was despite the age difference and having so little in common.

When Louise’s mother passed away, the couple established themselves in her house. There they lived happily for several years. But Tommy remained convinced that the artsy, well-educated Louise was too good for him.

Then The Sick struck. This virus resulted what seemed to be 90+% morbidity. The Sick wasn’t behaving like any known virus, and within months it was too late. The infrastructure disintegrated as too many had died for society to keep going. 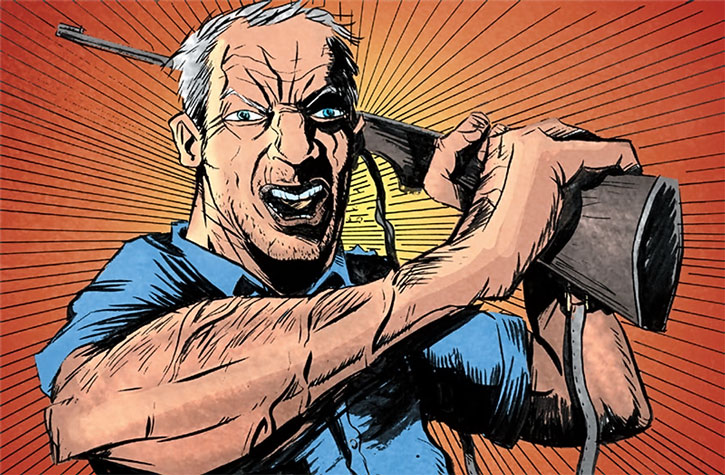 For a time the survivors thought that it was over and that they had developed an immunity, as with most plagues. But as it turns out, The Sick kept on killing unpredictably. Most people reached the conclusion that it was over for mankind.

In many areas, the situation worsened. Authorities and the military let go of the doomed population. They fortified themselves and looted stocks of food, fuel, ammunition, etc. to hold on as long as possible. However, they had no clear means to shield themselves from The Sick.

Tommy and Louise survived the initial die-off. But they soon realised that they couldn’t stay home as they had no information and would soon run out of food. They took to the road, and joined communities of survivors.

However, the survivors’ camps would randomly become plague camps overnight. And the original spirit of solidarity turned sour as the stocks of food dwindled. The Jepperds eventually found it safer to operate on their own.

In this grave new world, Tommy found that his talent for violence and his decisiveness were vital assets. Now his strength and killer instinct protected Louise. With Tommy, she was safer than practically anyone else.

They endured for six or seven years. Though the harrowing conditions, hunger, cold, violence, fatigue, etc. took their toll they remained strong.

However, Louise realised that she was pregnant. They could not remain on the road – they had to somehow find some sort of stable community.

Furthermore, Louise was greatly worried by persistent rumours that kids were now all born with terrible animalistic deformities. Tommy, on his end, thought that it was all nonsense.

The loss of his beloved wife broke Mr. Jepperd. For weeks or perhaps months, his only goal was to fulfill his promise to take her home – in the only manner that remained possible.

The plan was that he would then drink a lot and get himself killed, but that didn’t work. 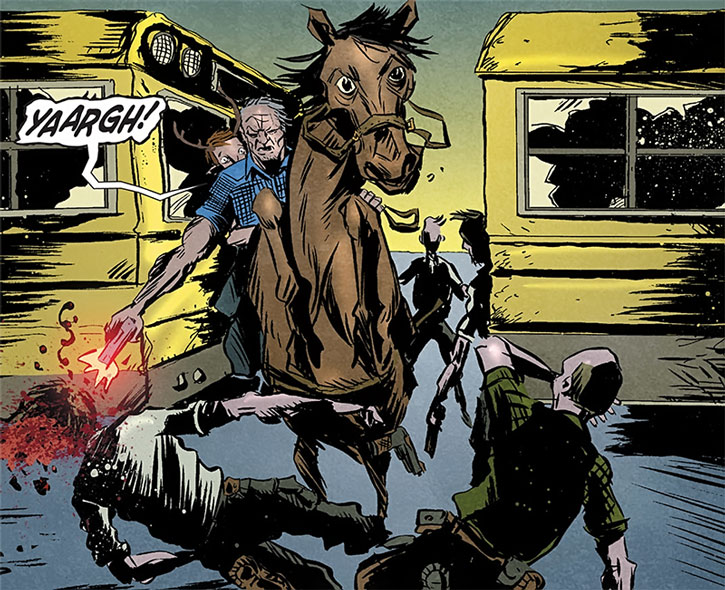 Though he has little education and isn’t good at abstract thinking or planning ahead, Mr. Jepperd has other forms of smarts and is a competent, cunning survivor.

He relies a lot on his ability to kill people. But, well, it works, and he has come up with decent plans when just fighting wasn’t feasible. Still, his plans have a step A and a step B, but C and later tend to be undefined.

Jepperd sees himself as a complete loner who doesn’t give a flying eff about anybody’s welfare. He kills at the drop of a hat if that accomplishes his objective. He’s a burnout, with no hope left amidst his complete cynicism, and he wants to die.

However, despite this and his own self-image as a crude brute only given worth by Louise, he has a strong undercurrent of decency. If prompted, especially by a kid or a young woman, he will reluctantly do the right thing and defend innocents.

“If you think you can pull that trigger faster than I can grab that gun and break your fucking neck, you’re welcome to try. We’re all dead anyway… now or a week from now… don’t make no difference to me.”

“Look kid… everyone got sick. Everyone got real sick and died. And those who ain’t died of it yet are sure as Hell gonna soon. It’s in all of us, see, all of us ’cept your kind. You hybrid kids don’t get sick. Something fucked-up in yer DNA or some shit. Who knows.” 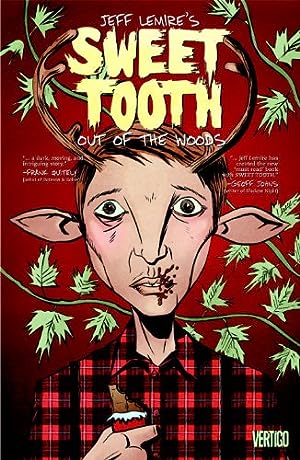 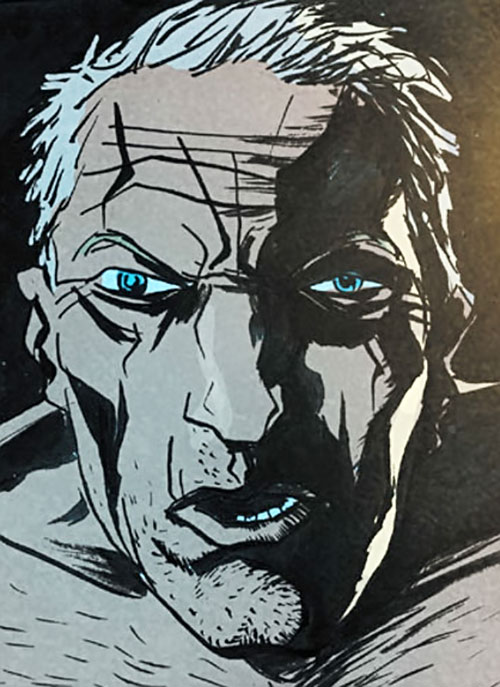 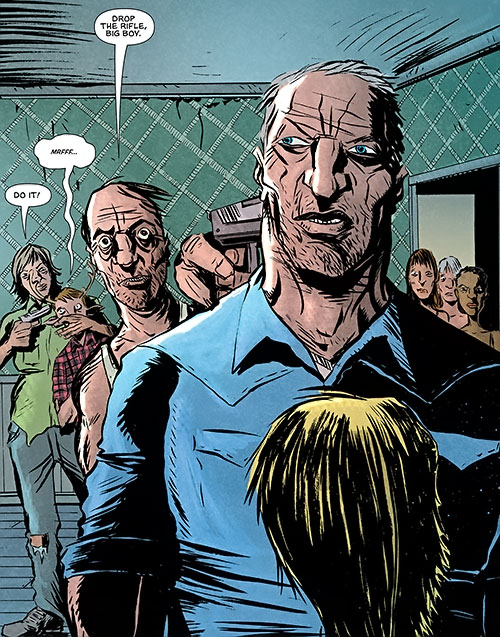