Agent Martin is a genuinely competent special agent and hitwoman. She can track down people, set up assassinations, subtly interrogate marks, fight and/or drive her way out of trouble and the like – with more proficiency that most of her colleagues.

Martin is a gorgeous young woman. Beyond her stunning looks, she has a peculiar vibe of smouldering sensuality and sex appeal even when she’s not actually doing anything special. This is practically black magic – nearly anybody interested in women will want to shag her upon seeing her.

This is both a considerable asset in her work, and disquieting in her personal life.

Jessie Martin was a junior administrative assistant for the CIA. However, she had excelled on the routine tests during recruitment. Thus, the Agency’s HR department was vaguely considering training her to become an agent or an analyst.

She worked in the Operations Dept. at Langley, which back then was headed by Frank Giordino. Who also was a member of the mob, though this is another story.

As often in Martin’s life, she got ahead without really meaning to and because of her looks. The libidinous Giordino spotted the sultry 18-year old file clerk, convinced her to become his mistress, and soon had her promoted to become an agent.

Though becoming an agent on the strength of her fetching curves and pouty mouth wasn’t entirely auspicious, Martin was a surprise hit. She would demonstrate genuine intelligence, skill and determination in the field even when her assignments went ugly. 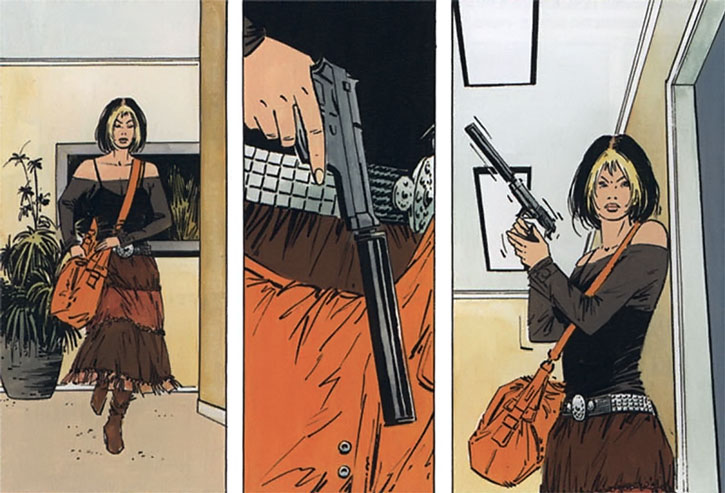 Even before Martin was officially accepted as an agent, Giordino sent her in the field. Since she was still a secretary and not an agent, the usual considerations about CIA agents not operating domestically could be sidestepped.

She was sent to vamp Seamus O’Neil aka Kelly Brian. He was a Boulder University student who was about her age, and a suspected IRA insider. The canny young woman was successful. But as she worked she realised that her actual objective was to run surveillance on Brian’s friend Jason McFly. She also deduced that McFly was the son of a personal foe of her sugar daddy Frank Giordino.

In the end, Martin found herself intervening in an IRA execution, killing an IRA hitman who had just accidentally murdered Brian. In the wake of this death, she helped recruit McFly for the FBI.

Giordino was later made the head of the National Security Agency by President Wally Sheridan. He brought Martin along with him.

Having the new boss’s 20-something mistress join as a special agent wasn’t terribly popular with the old NSA hands. Especially as she was assigned to what was viewed as a man’s work par excellence, the Sanctioning Division.

Based on the Roman theme then used by the black bag department, she became Callsign Diane. Martin reported to Callsign Saturn (then the Sanctioning chief) and Callsign Jupiter (Giordino). Though Saturn didn’t like her, she again was a surprise hit. Callsign Diane demonstrated that she was a superior assassin.

During her late CIA career and early NSA career, Martin was approached by an undercover KGB agent, Irina Svetlanova. An elite hitwoman — well above even Martin’s skill — Svetlanova has been ordered to get close to Martin. The KGB had anticipated that the former secretary would become a star agent within a few years. 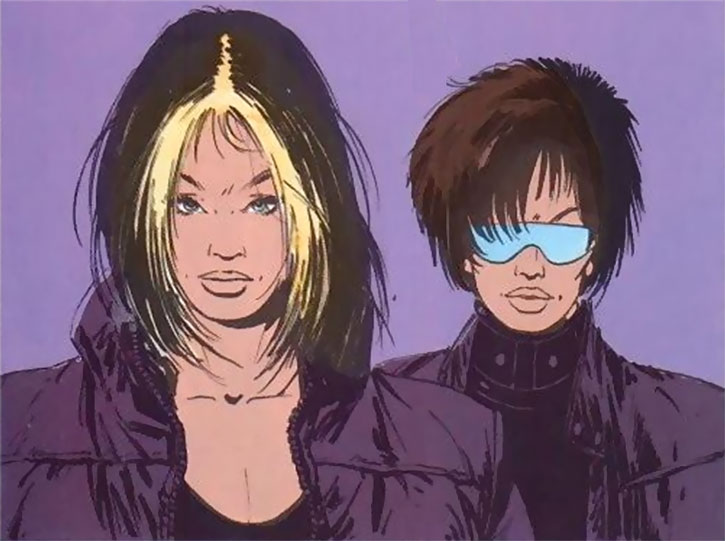 Svetlanova sensed that she could seduce Martin, and was successful. However, despite her well-earned reputation as a stone-cold ice queen, Irina fell in love with Jessie. The young American strongly resembled the great love of her life, whose sordid murder by a sexual predator had shaped Svetlanova’s entire adult life.

One of Svetlanova’s goals in the US was to gain her revenge on the predator at long last. Martin agreed to help her set up the hit. Irina’s mission of vengeance was successful thanks to her lover’s support.

Svetlanova soon deserted the KGB and was recruited by the redoubtable international hitman nicknamed the Mongoose. Meanwhile Martin remained both Giordino’s and Svetlanova’s lover, and an NSA hitwoman.

When somebody finally managed to kill the Mongoose, the ambitious Svetlanova used her ex-employer’s assets and contacts. She founded a company of killers for hire named Executor. Martin’s sugar mommy paid well, and convinced her young lover to start taking Executor contracts. These paid far more lavishly than equivalent NSA wetwork.

Thus it was in her role as both an Executor contractor and a NSA assassin that Jessie would come to clash with one of the most dangerous men on Earth – XIII.

The more recent XIII Mystery book about Colonel Amos include new information about Martin. We have kept it separate to avoid S P O I L E R S, and for those who do not consider these books in-continuity.

Her actual name is Isqah (that’s pronounced Yishka, more or less) Martin. “Jessica” is the English form of this Hebrew first name – it is very common for Isqahs to go by Jessica outside of the multitudinous Hebrew-speaking countries.

Her mother was named Kira, her father Aaron, and unbeknownst to her her biological father is Colonel Samuel Amos. From context the family name probably comes from Aaron. Kira’s family name is unknown ; she is a CIA employee, possibly an analyst.

Kira is a former lover of Colonel Amos, who left him decades ago due to his workaholism. This was a very painful experience for both Kira and Samuel, and it got worse when a few weeks later Kira learned that she was pregnant.

Kira had just met a very nice man named Aaron in the rebound. As she half-panicked over her pregnancy, she had her gynaecologist massage the date of the test to make it look like Aaron was the father. This moment of weakness actually worked out fine. Kira and Aaron happily raised their Isqah, who grew up to become a spectacularly attractive young woman.

Aaron died when Isqah was but 20. As mother and daughter were mourning him, Kira randomly ran into Samuel. She decided to tell him the truth now that she had lost her companion.

Though the experience created new wounds and reopened old ones, Samuel eventually decided that it was best for Isqah not to know and to let her mourn her dad. However, he also left a message telling her the truth as part of his will.

Not too long later, Kira learned that the Agency was looking to hire a clerk, and suggested that Isqah apply.

Jessie is very lonely. Though she’s besieged by an endless stream of guys who go gaga at the thought of exploring her underwear, she knows that she’s seen first and foremost as an exceptionally hot piece of arse and never approached as a person.

Even in the case of Svetlanova, Martin knows that there exists a distance. Though she doesn’t know the details, Jessie presumably sensed that the actual person whom Irina loves is the ghost of her first girlfriend.

Beside, Svetlanova is one scary killer. Even as a hardened hitwoman Martin is sensibly afraid of her. Jessie also knows what will happen if she ever fails her second employer – and that their romantic ties will likely not protect her.

Martin’s loneliness and detachment are important assets in her career as an agent and assassin. She’s not really attached to anything, she doesn’t mind lying and manipulating since she feels lied to all the time. Killing people doesn’t make her feel particularly bad – or particularly good for that matter.

The relative emptiness of her life leave her free to focus her intelligence and perceptiveness on her job. When an Executor hit involved gunning down NSA agents from her own department, she simply didn’t care. She even shot one of her colleagues in the back to get the job done.

In the field, Jessica is frequently playing a role (often that of a naïve and well-meaning youth) to seduce someone. If not, she acts as a competent operative who handles tense situations with a calm and professionalism that belie her fresh-faced appearance.

She’s crafty, largely merciless and lies with aplomb. Howbeit, she occasionally evidences a vulnerable and youthful side in those few situations where she’s clearly in and over her head.

Martin is apparently partially frigid, though less so with female lovers than with male ones. This problem was suspended when, for once in her life, she was the person trying to get into an indifferent guy’s briefs rather than the other way around.

“Well, somebody has to handle the government’s dirty laundry, you know ? Come Danny, we’re going to give you your first and last scoop.”

Drawbacks:
Misc.: Agent Martin is occasionally not taken seriously due to her gender, youth and sex appeal.

Genre:
Real – the action in XIII is low cinematic  at best. 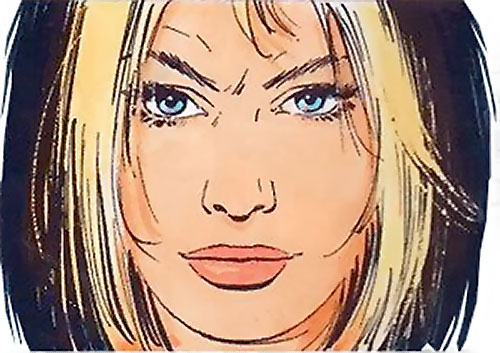 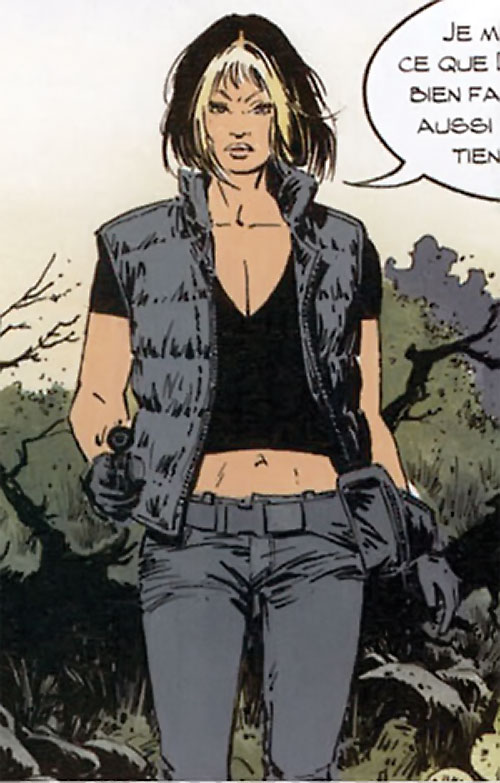 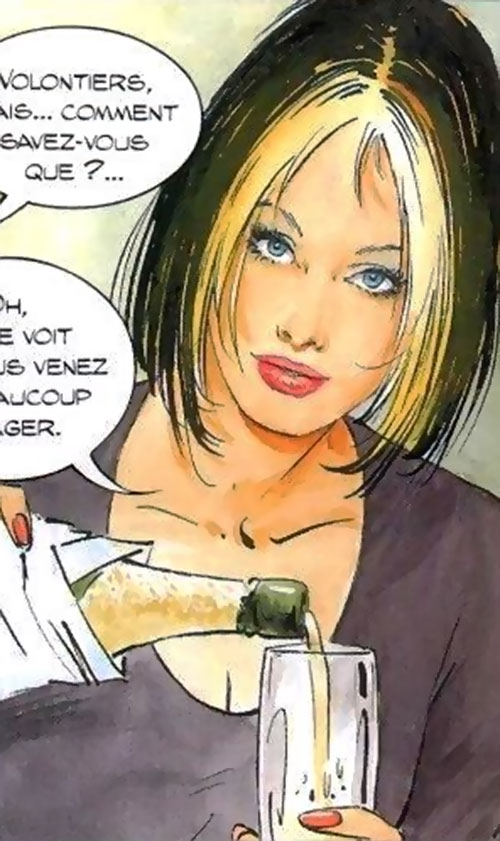 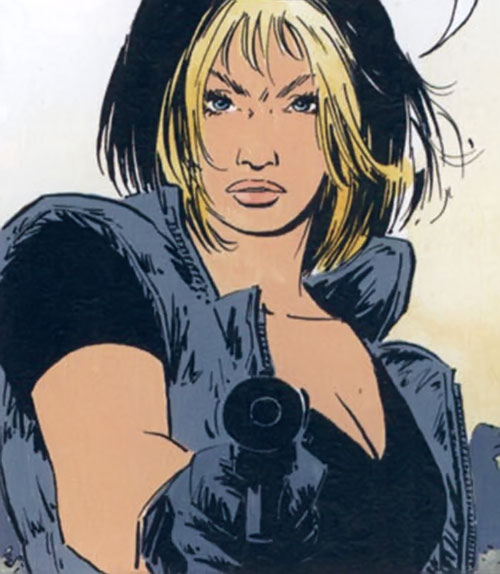 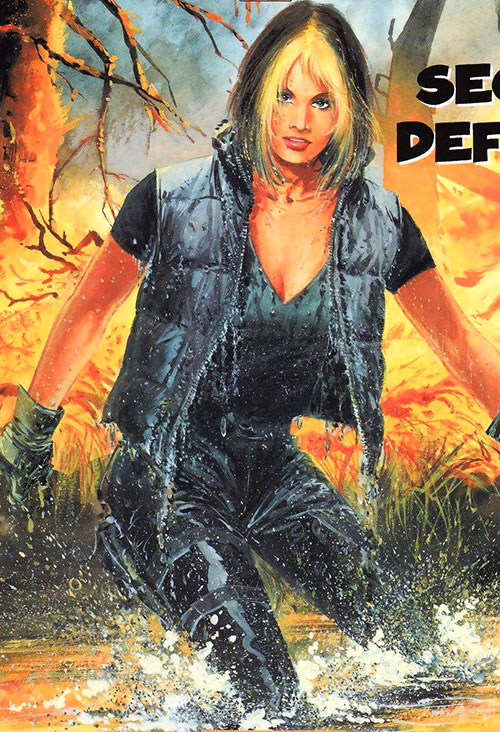 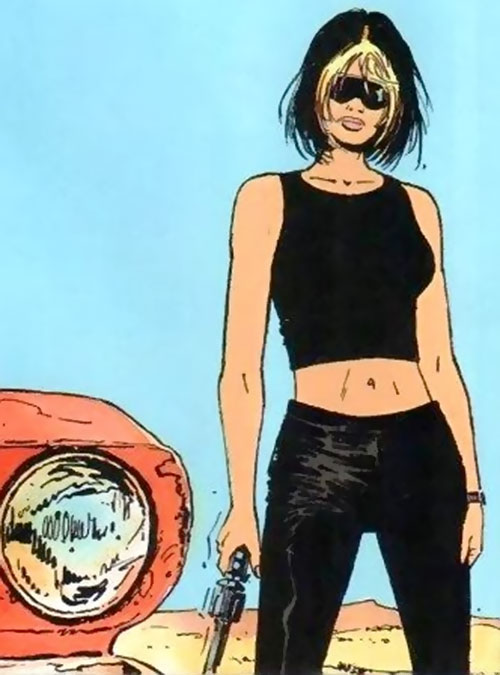