The Jester is a highly skilled acrobat. He has some skill in kick boxing and fencing as well.

The original Crazy Gang appeared as creations of Mad Jim Jaspers in an alternate reality known as Earth 238. In this reality, James Jaspers was a superhuman with vast psionic  powers. He killed off all of that world’s superheroes.

The Crazy Gang, along with Mad Jim, went on a crime spree terrorising the hero-less England. They were stopped by the sudden arrival of the Captain Britain (Brian Braddock) of the Marvel Universe (Earth-616 ). Braddock had been sent to Earth 238 in preparation to confront the Jaspers of Earth 616.

Jaspers had unleashed his Reality Warp. It basically turned the Earth, and eventually it’s entire universe, insane. Although both he and Saturnyne tried, they could not defeat Mad Jim. Thus, the Omniversal Council was forced to destroy the reality of Earth 238.

On Earth 616, James Jaspers was just beginning his machinations to take over the world. These would start with registration (and ultimately, elimination) of England’s (followed by the world’s) superheroes.

Captain UK, a refugee of Earth 238, tried to contact our Captain Britain and warn him. Too late, Jaspers created the Reality Warp, and in turn the the Crazy Gang.

Slay, my gang of the deep

The Crazy Gang did not know what to do with themselves. Knowing themselves to be criminals, they launched a totally incompetent and unsuccessful crime spree.

In desperation, they devised a cunning plan. They placed an ad in a newspaper seeking a leader of extreme genius. This was answered by the Slaymaster, disguised as the caterpillar from Alice in Wonderland.

Slaymaster planned their crimes, and turned them into a reasonably successful villain team. Once they attracted the attention of Captain Britain, and defeated him, Slaymaster abandoned his team.

Eventually, the Crazy Gang were contacted by the villain Arcade. He used them to kidnap Courtney Ross (Captain Britain’s former girlfriend) to lure Captain Britain into his deathtrap.

During their encounter with Excalibur, Tweedledope managed to switch the team’s minds with those of Excalibur. This created even more havoc before the villains were brought to justice, and everyone was returned to normal.

At some point, the Crazy Gang escaped or were freed from prison, but continued to lie low in this scary world. Soon, Tweedledope came across the wandering Joyboy. Joyboy had, with the rest of his teammates in the Technet, helped Excalibur on a mission. Tweedledope kidnapped Joyboy, bringing him back to the Crazy Gang.

Joyboy tried to use his reality-twisting powers against the Red Queen, to put her fantasies into reality and twist them. But, as Captain Britain put it, since “the Red Queen’s insanity distorts the fairytale imagery of Alice in Wonderland into a snake pit of dark fantasies, Joyboy reverses the distortion.”

The two negatives cancelled each other out, and the two ended up recreating the world around them into a peaceful, happy wonderland. The Crazy Gang then invited the townspeople around them to share in this paradise, and they disappeared for a long time.

Excalibur investigated this disappearance and Captain Britain briefly clashed with the Gang. The Crazy Gang wanted to simply stay and play with the people around them, and so Excalibur left them in peace.

His hair and face are not make up, but his natural look.

The Jester is probably the most intelligent member of the Crazy Gang, which does not say much. When left to their own devices, the Jester is the default leader, and comes with all of their plans. The execution of the plans leaves something to be desired, however.

Aside from that, the Jester behaves exactly as an incredibly stupid, incompetent clown would.

“What strange rude creatures we are amongst. This place is a puzzlement I do not understand.”

The original Jester was known as Coco, and was created by Mad Jim Jaspers of Earth 238. They share similar statistics, however. 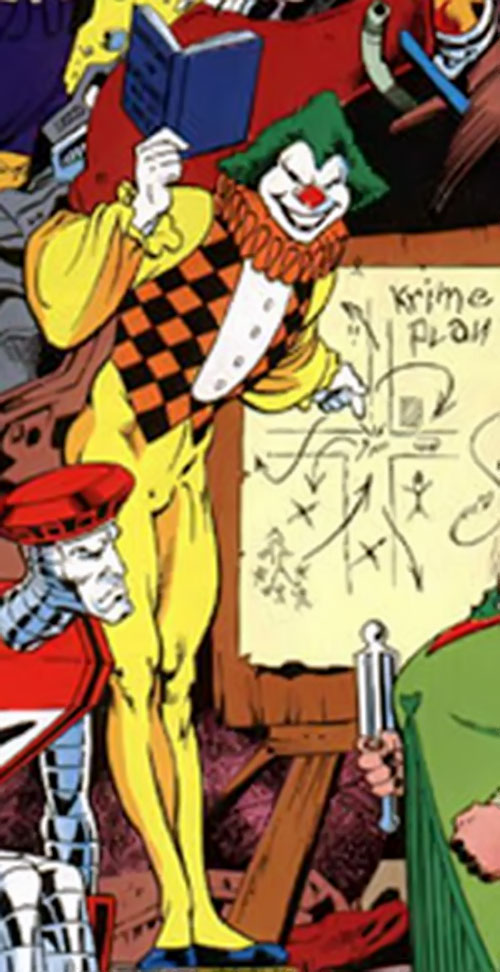