For some context about Wetworks, see the Jackson Dane character profile first.

Jester was previously a specforce operative from Team 7.

As usual, his symbiote  enhanced his natural tendencies. But Dexter placed little value on in own life. So the symbiote completely replaced his body by synthesized (from symbiotic organic material) equivalent. It is no longer an addition but a part of him, making Jester impossible to harm physically.

It also gave him complete control over his form. Jester can thus take any appearance (man, woman, animal, monster…) and even imitate complex equipment (like growing guns from his arms).

See Dane’s write up in the database for Team 7’s history.

Dexter LeMoyne is known to his past superior as a troublemaker outside the field, but a skilled tactician within it. After serving a prolonged term with the Navy’s SEAL Team 6, Jester eventually found himself under lock and key. The official end of his career followed close behind.

Dane saw the potential still thriving in the young lieutenant, if his attitude could be refined. He eventually convinced his superiors to believe the same, and Jester was given a second chance.

His record under Colonel Dane was nothing short of exemplary, and his assignment as the team’s second assassin proved to be his calling in battle.

Reading his tendency for putting his life at unworthy risks, his symbiote concluded he didn’t needed his body in its present form. So he replaced it. With no organic body, current medical science would label him as dead.

When he learned and understood that, it was a big shock for him and the team. It was the obvious sign, with Dozer’s growth, that the symbiotes were indeed permanently affecting their hosts. 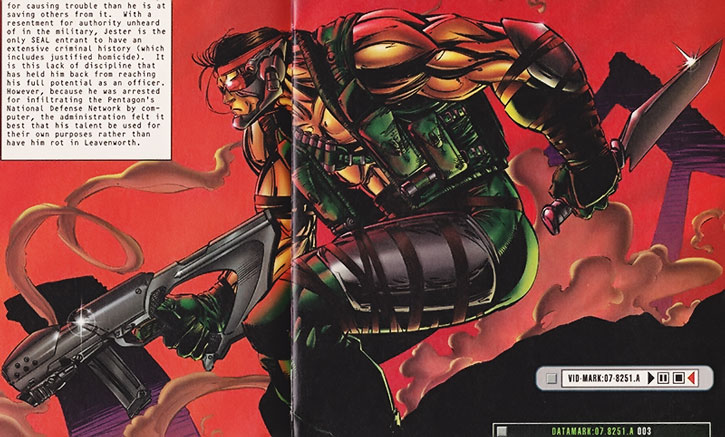 Nevertheless, his new found ability to shape his body at will proved quite useful. In the course of the saga, he:

It also led to weird situation. Like when Claymore shoot through his head to kill a blindsiding opponent. After all, what is a hole in the head when one can fill it instantly.

However, Jester is still vulnerable to mental attacks, like when Drakken turn his mind into a wreck so he was unable to keep a coherent shape and was so rendered useless.

In his natural form, Jester is of the playboy type.

Jester’s overactive tongue and evident disregard for personal safety are tempered only by:

“Nice save, Big Man ! Now how about getting these two leaf blowers off your back and giving us a hand ? Some of us ARE working, you know.”

I combined Regeneration, Invulnerability and Mind over Matter (notice that MOO and Regen are matched up to killing damage) to reflects that he cannot be physically harmed. 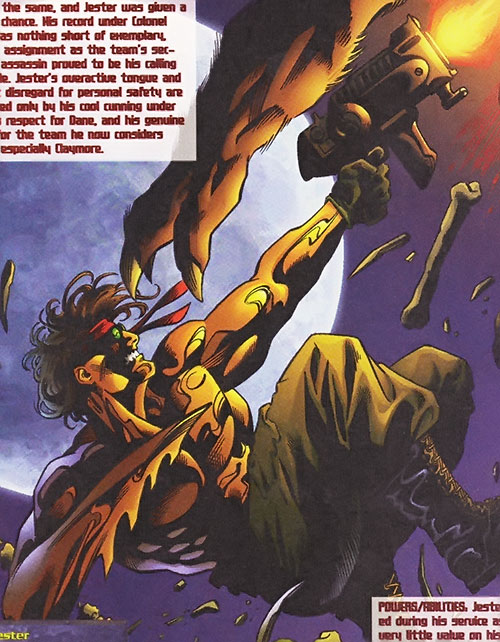 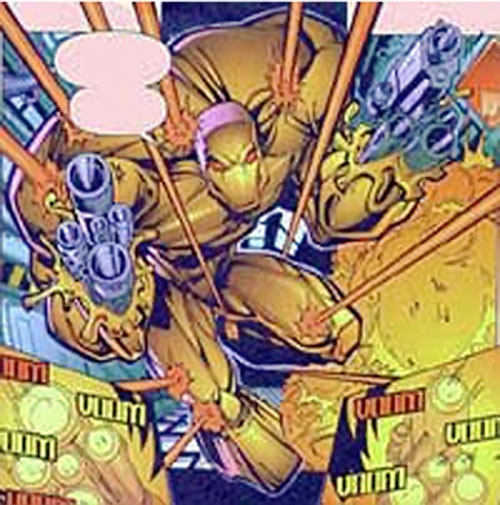