Jetstream can generate large amounts of “thermo-chemical” energy and release it from his skin. He learned to vectorize it behind him so it could lift and propel him, much like his fellow mutant Cannonball (Sam Guthrie) does.

His speed remains subsonic – though one assumes that he developed his speed and manoeuvrability through training and experience. Jetstream can apparently accelerate to his top speed within seconds. Over the years, Haroun and Sam’s flight performance has remained roughly equal (with Sam being a bit faster, and Haroun a bit more manoeuvrable).

Since his accident, he has a number of cybernetic implants to help him control his powers. The main ones are a rocket backpack that can unfold from his back, two smaller nozzles popping out of his thighs and his onboard radio and “compu-scan”.

He appears to be unusually resistant to body-wide, structural impacts such as crashes and collisions. For instance, flying through a large oak only stunned him, without apparent wounds. Whether this is a result of a Cannonball-like force field (albeit in a weaker, invisible version) or cybernetics is unknown. Plus, human beings are generally much more resistant to these impacts in comic books than in reality.

Haroun ibn Sallah al-Rashid is originally from Morocco, from a Berber  area – presumably in the Rif . His mutant powers allowed him to fly like a human rocket, which he greatly enjoyed. But his mutation wasn’t thorough and his body wasn’t quite protected from his own powers.

One day the reaction went haywire and his flesh caught fire. Though in a terrible state, he was still alive and the Hellfire Club eventually found him.

During the early 1980s, the White Queen of the Hellfire Club (Emma Frost) had been assembling a cadre of superhuman mutants. These were essentially her answer to Professor Xavier’s New Mutants. Like the New Mutants, Frost’s Hellions were teenager — al-Rashid was in fact several years younger than his opposite number in the New Mutants, Cannonball (Samuel Guthrie).

The Berber teenager received a number of cybernetic implants and reconstructions. The goals were to allow his body to use its power, and to repair the damage. Many of these systems allowed him to better direct the thrust propelling him in the air, and some apparently compensated for lost organs. For instance, it seems likely that at least one of Haroun’s eyes is cybernetic.

For more about the Hellions and the events this team went through, see our team profile.

Jetstream was the de facto field leader of the Hellions when they first clashed, in 1984. He was apparently the one who convinced the rest to have a duel between the two teams, as he thought that psychic manipulation was dishonourable and the New Mutants were entitled to a fair fight to determine their fate.

Thunderbird (James Proudstar) gradually affirmed himself as the Hellions’ field leader, outshining Jetstream. Jetstream nevertheless remained with the team. Like most Hellions was murdered in 1991 by Trevor Fitzroy.

He and other dead Hellions were reanimated as transmode  revenants in 2009, and joined Selene’s army of the dead. During the war against the X-Men, the Jetstream techno-zombie neutralised Wolverine for a while by flying him up and dropping him. He also duelled Cannonball – though the more powerful Cannonball won.

Danielle Moonstar then cleft Jetstream in two using an automated armoured door, but the zombie could soon be reattached to its legs.

During a later confrontation with the New Mutants, the Jetstream techno-revenant was slain by Danielle Moonstar using her valkyrie death sword. This is thought to have freed his soul from its techno-organic/necromantic prison.

In formal occasions, Haroun will go for a white suit and a “generic Middle Eastern as seen from the US” keffieh. He sleeps in a light djellabah. As usual in super-hero comics, his skin tone varies dramatically from appearance to appearance.

Jetstream was a good, if brash, young man with a strong sense of honour and competition. He was proud and articulate. Unsurprisingly, he didn’t get along at all with Empath. Had he fallen in with another crowd he could easily have become a hero, albeit a rash one.

As he grew up, Jetstream learned the value of caution – and even of a strategic retreat. But also became more prone to insulting his opponents and underestimating them. Such is presumably the influence of the White Queen.

Haroun tended to trash-talk his opponents, and displayed a lot of old-school contempt toward them. He also had something of a macho streak. Jetstream had a running feud with Cannonball, but it was a sports-like rivalry to determine who was the better flyer. Generally he’d always go after the fastest enemy flyer – when clashing with the New Warriors, he chose Nova (Richard Ryder) as his opponent.

“Defeating one Hellion is a far cry from beating us all !” (ZZZOOOMM !)

“We joined the Hellions by choice. Some of us don’t like the idea of you being forced. Also, our initial meeting ended inconclusively. We want to see how good you truly are. And how we’ll stand up against you. We propose a duel — one of you versus one of us. In our combat room. Should you win, you all go free.”

“Clumsy oaf ! You may be more powerful, American, but I can maneuver.”

“Work things out between us with a contest ? Splendid !”

“No ! The honour of this victory belongs to Jetstream !” (KRUMP !)

Source of Character: New Mutants and other Marvel Universe books. 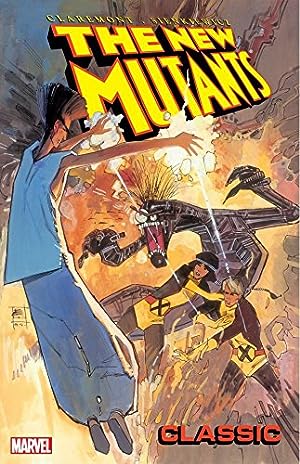 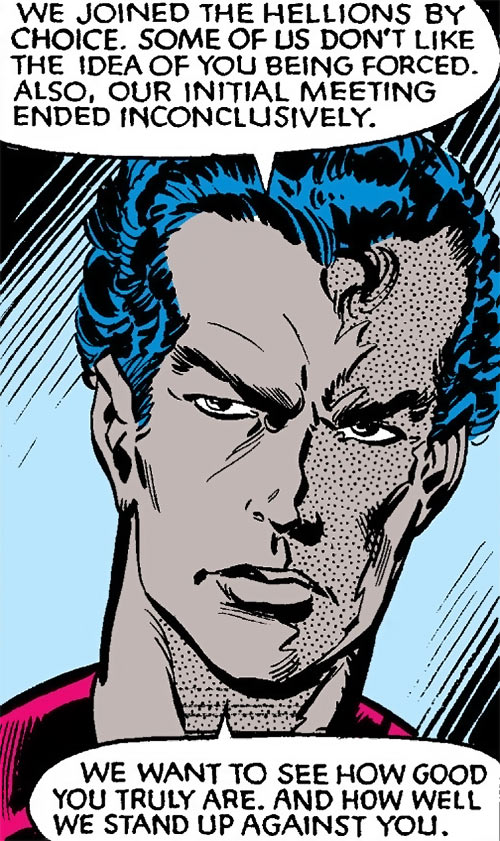 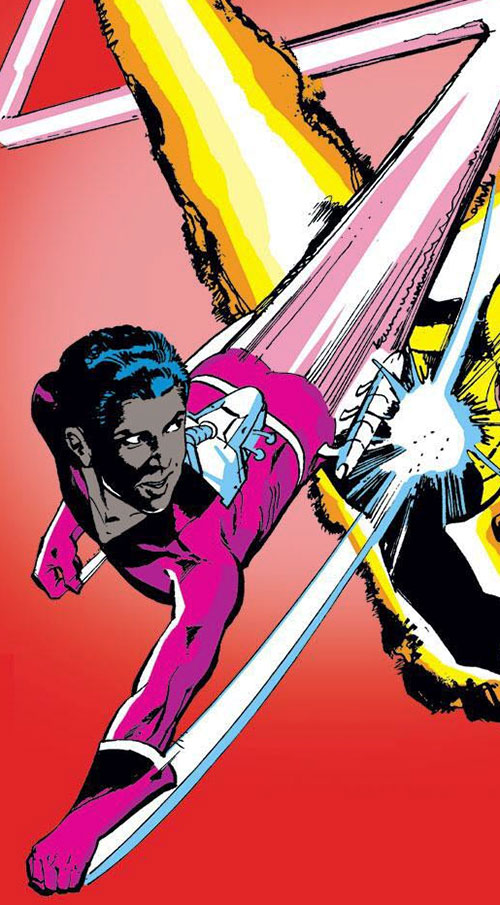 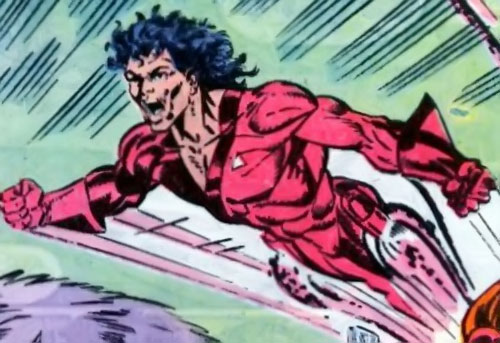 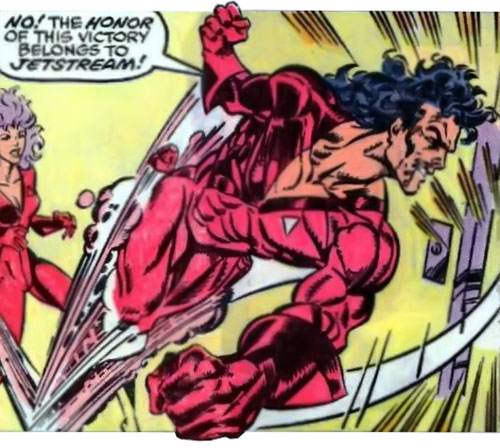