Neidhart is a “brick ”. While he can run very quickly, his reflexes and small motor coordination are not notably fast.

He is a competent hand-to-hand combatant.

Jim Neidhart was playing football for the Dallas Cowboys  when his sudden display of superhuman strength crippled a teammate during practice. Neidhart found himself out of a job very quickly.

Had the incident occurred five years later, he would have likely ended up being recruited into Kevin Sullivan’s “Varsity Club” criminal operation. Instead, he found himself in Canada training in the Hart Dungeon, based on the recommendation of a friend who had been turned down by the Hart family.

Neidhart began his training. While hardly excelling, he showed some limited promise. He became close with the Hart family, marrying one of Stu Hart’s sisters.

He was especially good friends with Bret and Owen Hart. Jim became Bret’s partner in the field. They formed “The Hart Foundation” and served as the premier operatives hired out by the Dungeon. That was despite the higher level of skill attained by other trainees like The Dynamite Kid and Davey Boy Smith.

As Bret’s family grew he became more concerned with the image he was sending his own children by working as a mercenary. Therefore, he quit the “family business” and began working as a “superhero” in the United States. Neidhart formed a new team with Bret’s brother Owen, who also left to join Bret in the U.S.

Neidhart returned to the Dungeon, where he continued to assist in training students until his divorce from his wife, when he was forced to return to mercenary work to make ends meet.

Neidhart is a muscular, stocky man with a growing gut. He has a buzz cut and pointed goatee.

He wears a hot pink, black, and white costume similar to Bret Hart’s, but with an anvil logo on it.

Neidhart is something of a bully in the “make fun of anything that is over your head” kind of way.

He is crude and violent at times, but is extremely reliable and prides himself on having earned the trust of those with whom he works.

“HA! Hahahahahahahaa !!!.” (must sound both gravelly AND very forced.)

He isn’t terribly hard to fit in just about anywhere. He’s another thug, albeit a fairly strong one with a good work ethic. 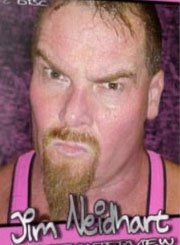