Jimmy Woo has continued to refine his field and investigative skills, and received S.H.I.E.L.D. training. He’s a very capable agent, among the best even within S.H.I.E.L.D..

However almost all of his appearances during this era as are a bit player, as reflected in his DC Heroes Hero Points .

Using experimental S.H.I.E.L.D. ESP equipment, Woo helped Colonel Fury locate the Claw. Though even S.H.I.E.L.D. was taxed by the immense resources and the genius of the Claw, the battle revealed several new high-potential agents. These included Clay Quartermain, the Countess Valentina Allegra de la Fontaine and Sidney “the Gaffer” Levine.

Fury survived the assaults of the Claws’ organisation by the skin of his teeth. However, Woo was captured during the second step of a two-stage ambush.

For a time, it seemed that Su Wan was killed during the final clash between Fury and the Yellow Claw, and died in Jimmy’s arms. James Woo swore vengeance against both men. However, S.H.I.E.L.D. determined that the “Claw” and “Su Wan” had been incredibly realistic robot doubles all along.

Fury wrote Woo to inform him of this, and to make a job offer as he wanted the G-Man on his team. Jimmy eventually agreed to join S.H.I.E.L.D..

Woo qualified up to the top level. He beat the traps and opponents in the death maze reserved to testing agents capable of personally working with Fury in the field.

Jimmy finished his full S.H.I.E.L.D. training, though Fury was captured by the renegade scientific genius Centurius before he could give Woo his first assignment.

Agent Woo regularly worked with the top S.H.I.E.L.D. people, though much of his late 1960s career with that organisation is undocumented. His known cases include :

Woo was also involved with S.H.I.E.L.D.’s clashes with the “king of monsters”, Gojira (aka Godzilla) during the late 1970s.

He found himself attracted toward Tamara Hashioka, the assistant of Dr. Takiguchi, a scientist famous for his oft-successful efforts to repel or calm Gojira. However, Ms. Hashioka did not initially return his interest, in part because of Woo’s rash actions to gain her interest. 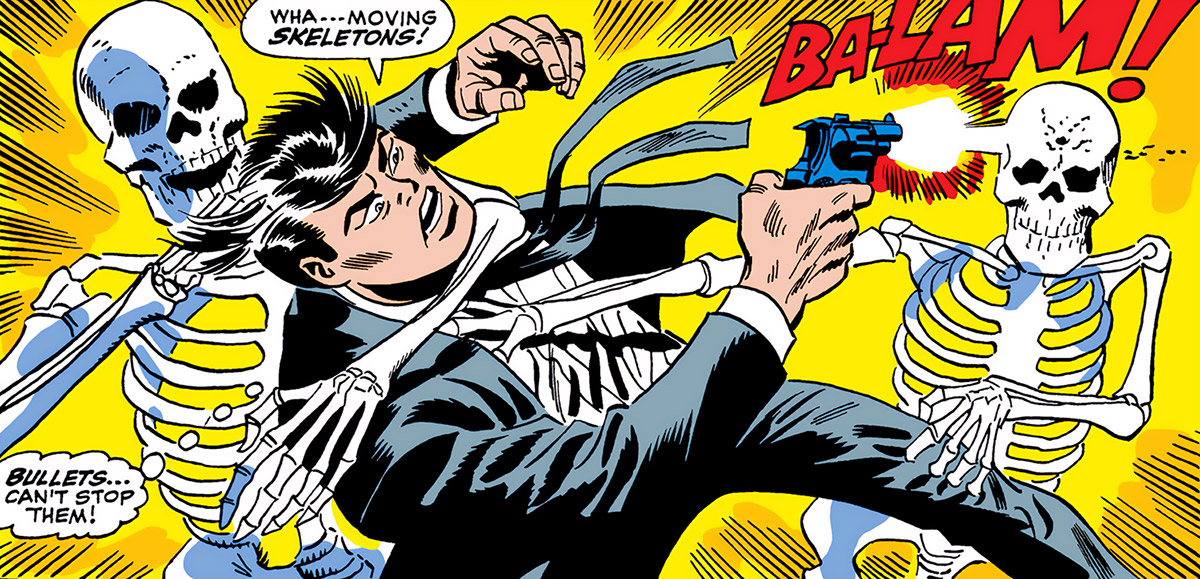 During the Gojira “campaign”, Woo had to stop the gigantic Red Ronin robot. This machine had been built by Mr. Takiguchi and Ms. Hashioka using Stark facilities but Takiguchi’s grandson, a kid named Rob, commandeered it.

As he stopped Red Ronin, Jimmy Woo discovered that Rob had fallen unconscious, but not before imprinting his psyche upon the robot and making it impossible for anybody else to pilot it. The kid soon hijacked the robot again in an effort to prevent S.H.I.E.L.D. from killing Gojira, whom Rob considered to be his friend.

Despite their previous misunderstandings, a romance burgeoned between Agent Woo and Ms. Hashioka. This distracted them enough to allow Rob to commandeer the Red Ronin yet again. However, the agent and the researcher managed to extricate Rob from the wrecked mecha  after a brutal fight pitting the Ronin against giant alien monsters.

After they debriefed Rob, S.H.I.E.L.D. forces started distracting the aliens. This allowed the King of Monsters to kill them one by one and save Earth.

Mr. Woo and Ms. Hashioka started a relationship, but it did not survive the Gojira “campaign”. The King of Monsters was finally knocked out, captured and sent to prehistoric times to live with other giant lizards.

For Tamara, this meant leaving the US and returning to Japan as the crises were over. Thus, she and Jimmy had to break up.

James Woo was later transferred to the Hong Kong Division of S.H.I.E.L.D., presumably as the regional director. In 1984, he and his personal team were informed by Director Fury that the Black Widow was operating on their turf.

They assisted her in her clash against mercenaries sent to kill her by Damon Dran, the Indestructible Man. Jimmy saved her life after she was defeated by the Iron Maiden. 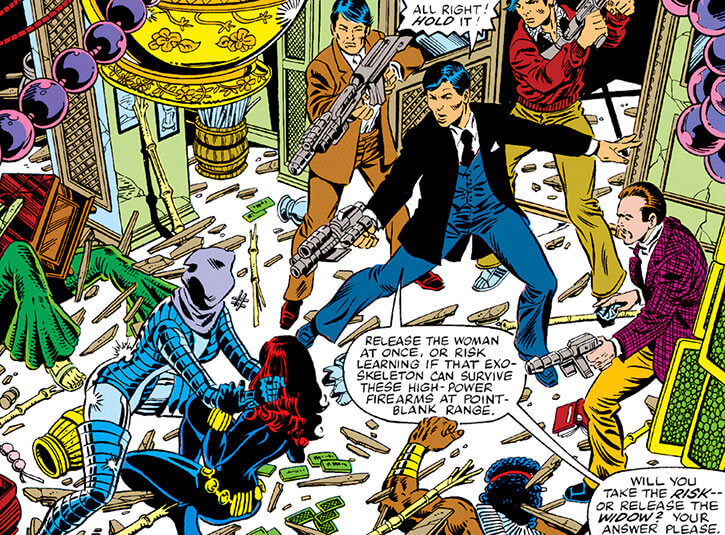 During the second half of the 1980s, S.H.I.E.L.D. was stealthily taken over during a complex plot called the Deltite Conspiracy. Along with several other key agents of S.H.I.E.L.D., James Woo was replaced by a LMD duplicate.

The substitution was not noticed. The Deltites had first replaced the sharpest agents below Fury to reduce chances of detection.

However, even an android double of Woo remained a hero. After exposure to a fatal level of radiation the Woo LMD, along with the LMD doubles of Clay Quartermain, Jasper Sitwell and Jack Rollins, destroyed the stolen power core powering Delta installations and thus the Deltite conspiracy.

The original James Woo was presumed dead at the hands of the Delta conspiracy, as were the numerous agents who had been replaced by Deltite LMDs.

In 1993, S.H.I.E.L.D. found suspended animation pods containing the missing agents. These had been stockpiled and brainwashed to become Hydra agents. Many were reactivated by Baron Strucker and sent to kill Fury. One such group included Woo, Sidney Levine, Jasper Sitwell, Laura Brown and two unidentified agents.

Colonel Fury and Captain America stopped them and had them deprogrammed. Woo and the others returned to active duty in time for an assault on Baron Strucker’s newest fortress, during which Nick Fury killed the Nazi.

It would seem that, along with other core S.H.I.E.L.D. agents such as Jasper Sitwell, Woo experienced difficulties returning to life and the service. Having been brainwashed and believed dead for 5 years was too much of a hurdle.

His personality became more sinister and violent. Along with Sitwell he started specialising in interrogation work, becoming one of the top interrogators within S.H.I.E.L.D.. Though he was only seen performing verbal/behavioural interrogation, there were vague hints of more physical methods.

It was their work who allowed Nick Fury to detect a conspiracy headed by the Latverian Prime Minister Lucia von Bardas. As a result, Fury eventually launched an illegal ’secret war‘ in 2005 to stop von Bardas.

However, far greater revelations were in store for James Woo.

Mr. Woo likes wearing good, tailored dark business suits. He would rather wear one than a S.H.I.E.L.D. beta jumpsuit.

Even in the 1980s Jimmy seemed to be, at most, in his late 30s. Since he was chronologically in his mid-40s I’d assume he aged normally, if gracefully and while staying in top physical shape. Later appearances depicted him as being roughly his chronological age.

In 1968 (during the landmark Lee/Steranko S.H.I.E.L.D. stories), Woo’s speech and thought-bubbles acquire a faux-Oriental character. But this thankfully lasts for but a few pages.

In the 1980s, Jimmy acquires a bit of characterisation. He’s a man of action and a crisply professional agent, as well as a formal, precise, respectful man. His English (and, I assume, his Cantonese) is free of contractions and colloquialisms. Even when holding people at gunpoint his threats are exact and polite.

Getting disappeared, brainwashed and put into suspended animation for years apparently had a significant impact on him. It would seem that it triggered a personal crisis. Perhaps loved ones moved on with their lives as they thought him dead. Woo harboured an unhealthy amount of anger over those events.

He became more sarcastic and considerably more violent, and seemed to enjoy his role as an interrogator, even when it included manhandling bound suspects. During that period he apparently became a closer friend of fellow S.H.I.E.L.D. senior agent Jasper Sitwell, who became his usual partner when interrogating super-villains and terrorists.

The strange humour of their dialogue as they verbally interrogated subjects, sometimes likened to a good SNL skit, was popular with other agents watching the tapes as improv comedy.

“Release the woman at once, or risk learning if that exoskeleton can survive these high-power firearms at point-blank range. Will you take the risk or release the Widow ? Your answer, please.”

“I can tell by the scraping marks in the slate, that she’s been that way.”

“Now, perhaps it would be wise if we probed this opening. There is an outside possibility she did not come here at random — but was preparing to rendezvous with others.”

Source of Character: Appearances between the end of Yellow Claw (1957) and the start of Agents of Atlas (2006). 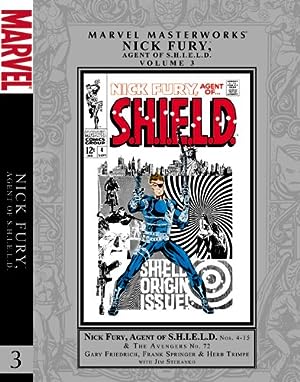 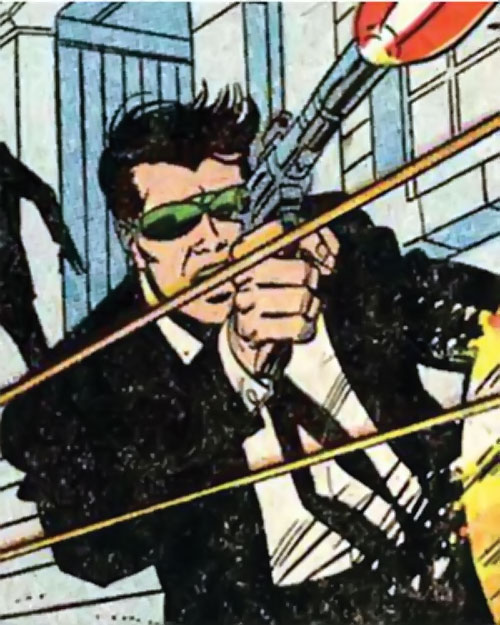 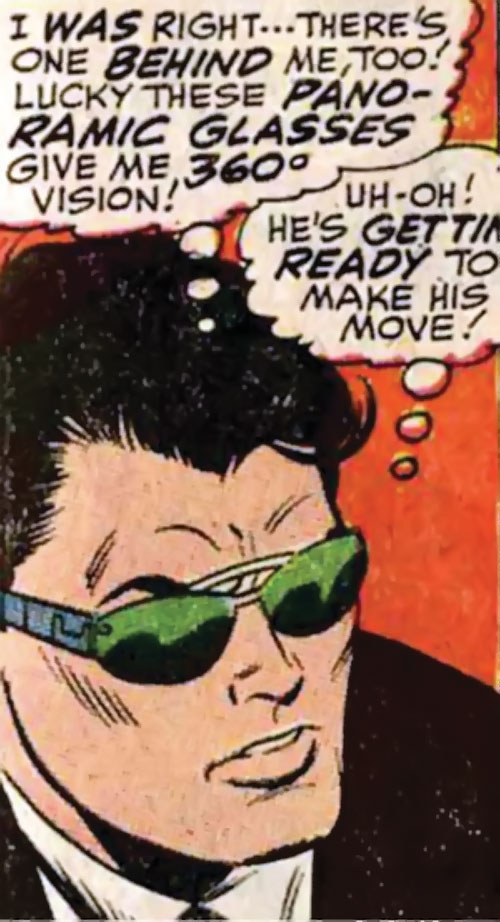 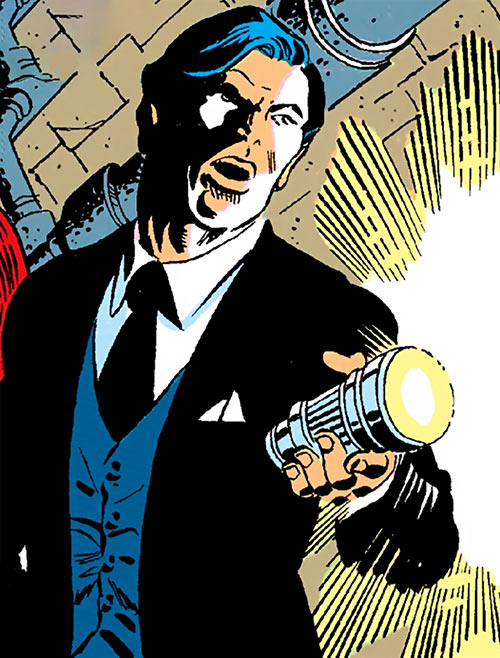 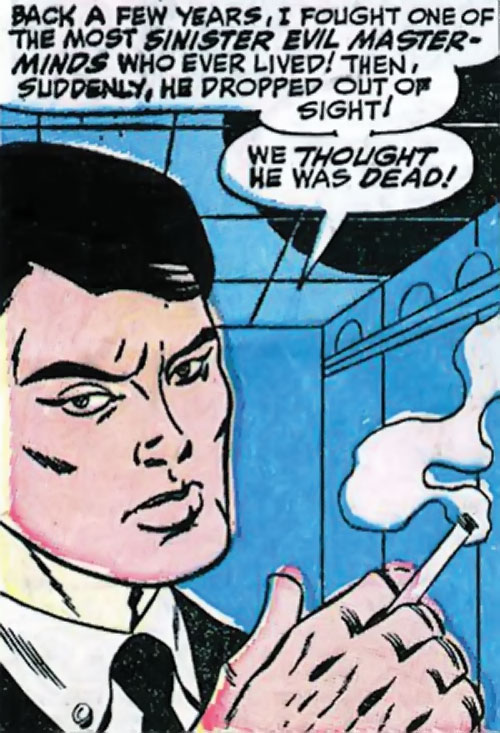 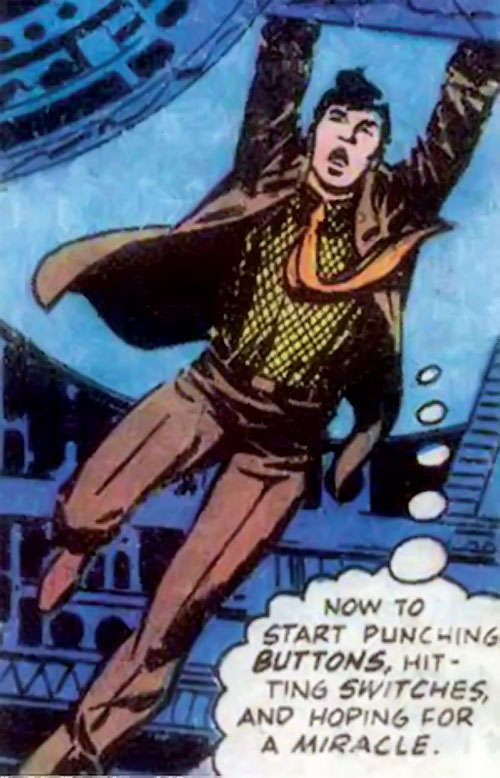 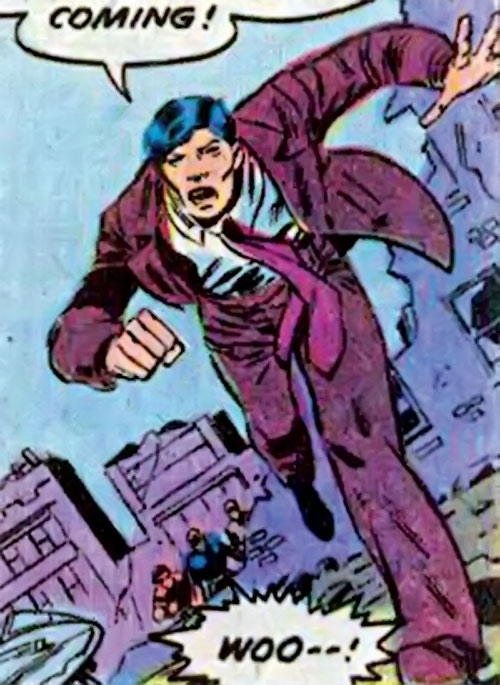 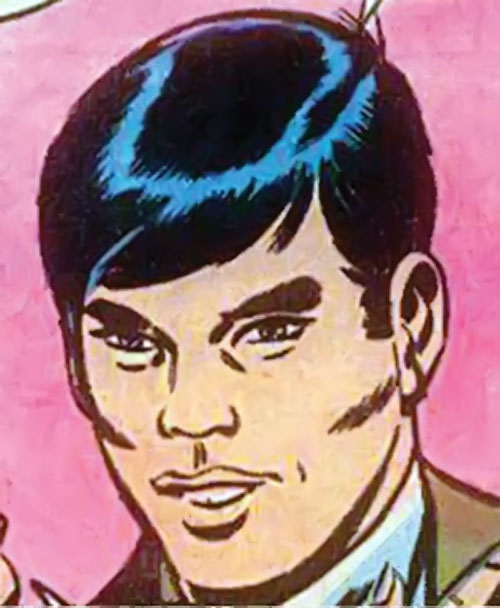