Jingle All the Way, allegedly a comedy movie, was released in 1996 to mixed reviews and good commercial success (likely due to starring Arnold Schwarzenegger).

It deserves to be immortalized because there aren’t enough Christmas flicks that not only embrace the crass commercialism of holidays but actively celebrate it.

“Turbo Man” is in the movie a sold-out action figure that all the little boys want. But there’s also a *working* Turbo Man super-costume as a promotion for the frenzy-inducing toy, which Mr. Schwarzenegger’s character ends up wearing.

In technical DC Heroes RPG terms, Jingle All the Way is set in the Humor Genre, which should not in any way be mistaken for it containing actual humor. Except when Arnold knocks out the reindeer.

And no, I ain’t doing a Booster writeup. Everybody hates Booster. Booster sucks. Though Booster getting beat like a drum by the kids at the parade was also amusing.

Though his primary talents in daily life lie in his ability to keep his business running smoothly (Expertise), Howard showed a surprisingly deft talent for wielding melee and missile weapons. Twice in quick succession, he stunned almost half a dozen mall Santas with a single swing of a giant candy cane during the battle at the black market toy warehouse.

Howard was also very accurate when firing the Turbo Man costume’s turbo disks. He managed a trick shot with the turbo-rang the first time he used it (albeit inadvertently).

Howard’s natural dexterity and strength were sufficient to make him a decent though not exceptional unarmed combatant as well, enough so that he could defeat opponents who slightly outmatched him in some ways.

Though Howard struggled with using the Turbo Man costume’s jet pack at first, he became a capable flyer in short order.

Howard Langston was a successful small businessman. However, he struggled with balancing work and family life. Though he provided a good home for his family, he was perpetually late if not entirely absent for important family events.

This trait placed Howard in a serious bind one Christmas when he realized he had forgotten to get his son a popular action figure based on the children’s TV series character Turbo Man (complete with annoying sidekick Booster, a big pink fluffy anthropomorphic cat wearing a golden thong).

Turbo Man was Jamie’s favorite superhero and he was so excited about the toy that he had even memorized the action figure commercial’s dialogue.

An epic quest for great treasure

With one day left until Christmas, Howard ventured out into the holiday crowds to pick up a Turbo Man action figure (it’s NOT a doll, dammit!) and return home in time to accompany his family to the annual Holiday Wintertainment Parade.

This year’s parade would be particularly special to Howard’s son Jamie since Turbo Man was making an appearance there and Howard had promised he would not miss the event as he had the previous two years.

Unfortunately, Howard had no idea about the heart of consumer darkness that he was about to enter. The Turbo Man action figure had sold out of stores weeks ago and both the store clerks and the other shoppers openly mocked Howard’s desperate search for the toy.

As if having to go on an epic quest just to get a cheap plastic action figure was not bad enough, Howard soon acquired a nemesis of sorts in fellow shopper Myron Larabee. Myron was also trying to get his son a Turbo Man action figure. Furthermore, he had been strained near to breaking by the demands of his postal work even before having to pound the pavement in search of a toy.

Howard and Myron alternated between cooperation, competition, and even commiseration as they both strived to find their sons a Turbo Man figure.

The day’s twists and turns also led Howard into a black market warehouse run by crooked mall Santas, an ill-conceived attempt at stealing a Turbo Man figure from his next-door neighbor (which he ultimately returned), and a fight with a reindeer (which Howard knocked out).

By the afternoon, Howard had estranged himself from his wife and son thanks to his broken promises to get the gift his son wanted and to be there for the parade, which painfully capped his other inconsiderate and irrational actions in recent days.

Sharing a beer with the now-conscious reindeer, Howard saw a drawing in his son’s backyard clubhouse of him, his wife, and his son holding one another — a rendition of the same photograph that Howard proudly kept on his desk at work. Inspired by the sketch, Howard resolved to make up for his mistakes.

Soon after Howard arrived at the parade, he ran into a police officer he had previously encountered during some of the day’s other escapades. Fleeing from the officer, Howard ducked into a nearby building.

The parade workers in that room mistook him for a performer and before Howard knew what was happening, he was sent out into the parade wearing a functional Turbo Man costume. The original performer had been injured in a costume malfunction and was only beginning to regain basic brain activity.

As Turbo Man, Howard was able to give his son Jamie a special collector’s edition Turbo Man action figure. No sooner had he done this than Myron entered the scene wearing the costume of Turbo Man’s nemesis Dementor.

Myron attempted to steal the action figure and the two men engaged in a battle royale that disrupted the parade, ending when Howard took out Myron with the Turbo-Rang and saved Jamie.

Howard then revealed his identity to his wife and son, who were suitably impressed by his efforts to atone for his poor behavior. Jamie gave Myron the Turbo Man action figure, feeling satisfied that he had the real Turbo Man in his father.

Turbo Man’s turbo-rang and turbo-jetpack in not necessarily mighty action.

A tall, fit man, Howard’s lean features are highlighted by his high cheekbones and his strong chin. Howard would be a horrible poker player, since his feelings are always very evident in his facial expressions.

He normally wears business casual polo shirts, slacks, and suit jackets at work. On his days off, he tends toward plaid and plainer brown coats, making him look a bit like a well-tailored lumberjack.

The Turbo Man costume is a shiny red spandex bodysuit with metallic red sculpted plastic panels over the major muscle groups of the limbs and over the entire torso. A golden T is emblazoned upon the chest, extending all the way down to the golden buckle of the suit’s belt.

The suit is further accessorized with golden calf-length boots and gloves, plus red forearm bracers with golden fins on the underside.

The final touches are a golden jetpack integrated into the back of the costume and a shiny red helmet that covers the top half of Turbo Man’s head. The helmet has a golden sagittal fin flanked by two aerodynamic golden air vents and a transparent orange non-retractable visor.

Though he is a serious workaholic, Howard still manages to keep a calm, friendly demeanor while juggling numerous business deals in quick succession. He assures each person he talks to that he or she is his number one customer, a habit so common that he has on occasion slipped and said the same thing to his wife.

While he was perpetually absent, he loved his family very much. This motivated him to go to absurd lengths to get his son the toy he dreamt of, which in the process made Howard realize that the most important thing he could do for his family was simply be there.

Howard sought to be a hero to his son and treasured the moments when he was able to do something that impressed and pleased the young boy. He was very delighted to be able to do this in a literal sense by assuming the Turbo Man identity, also responding enthusiastically to the acclaim of the crowd.

Though Howard can be short-tempered when frustrated, he will usually avoid unnecessary violence. He will respond when others attack him, but only enough so to stop his enemies and protect himself. He will even be forgiving afterward and was willing to share drinks with Myron and the reindeer that charged him after those fights were over.

“Don’t you forget, you’re my number one customer !”

Ted: “Mmmm ! Ohhh ! Howard, excuse me, but your wife’s cookies are out of this world !”
Howard: “What ? Who told you you could eat my cookies ?… Put that cookie down. NOW !

(Caught in a police raid of a black market warehouse, Howard bluffs his way past officers using a toy badge) “This must be the sloppiest bust I’ve ever seen in my entire career on the force !” (Quickly flashes badge) “Detective Howard Lang — undercover. I have been working on this case for the last three years and you guys come barging in here like a bunch of terrorists at a tea party ! Wait till the commissioner finds out about this. He is going to hit the roof ! Now, get your act together and arrest someone ! Go !”
Detective: “Yes, sir !”

“You can always count on me !”

After Booster Gold first arrived in the modern era, he pursued his career as a celebrity endorser. At one point his company sought to diversify into children’s entertainment but was concerned about diluting Booster Gold’s more adult image by making him a figure in television shows for youngsters.

Booster’s name was still loosely attached to the property as the name of Turbo Man’s sidekick. Booster was chagrined to learn that his namesake on the Turbo Man show was a giant pink fluffy cat, but he did not discover this until episodes had already started airing and it was too late to change it.

Turbo Man became highly popular with children, enjoying more success in that market than Booster was with adults. The events of the movie unfolded in pretty much the same way in the DCU.

Afterward, Howard Langston was so enamored of the Turbo Man identity that he continued to portray Turbo Man at various charity events and even began donating his time as Turbo Man during natural disasters and similar emergencies around the country. Langston soon became synonymous with Turbo Man.

Eventually, BGI fell on hard times and, as part of their attempt to stave off bankruptcy, put the Turbo Man property up for sale. Langston took the opportunity to purchase the franchise.

While there were certainly others who could have paid much more for the valuable rights to Turbo Man, Booster Gold had come to like and respect Howard and preferred that Turbo Man be purchased by the man who had brought the character to life.

Langston continues to provide charitable services as Turbo Man and has discussed making his son Jamie into his sidekick when the boy is old enough. This would be in preparation for turning the Turbo Man identity over to Jamie entirely someday.

Despite his public identity, Langston has not suffered any threats or attacks from criminals. Since he has been exclusively involved with charity and rescue work rather than crime fighting, he has not attracted the ire of any villains.

Furthermore, there are rumors among the supervillain community that, unbeknownst to Howard, one of the people he saved during a rescue mission was the mother or child of a legendarily dangerous villain. This villain (whose precise identity varies as the rumor makes the rounds) considers himself indebted to Turbo Man and would personally kill anyone who threatened or hurt Howard or his family.

Drawbacks:
Public Identity ; his family members are not listed as Dependents since they generally avoid getting directly caught up in Howard’s misadventures.

Source of Character: Jingle All the Way (movie), character played by Arnold Schwarzenegger. 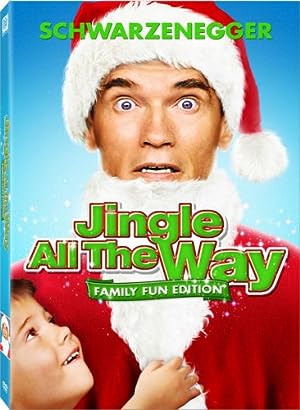 Jingle All The Way (movie) 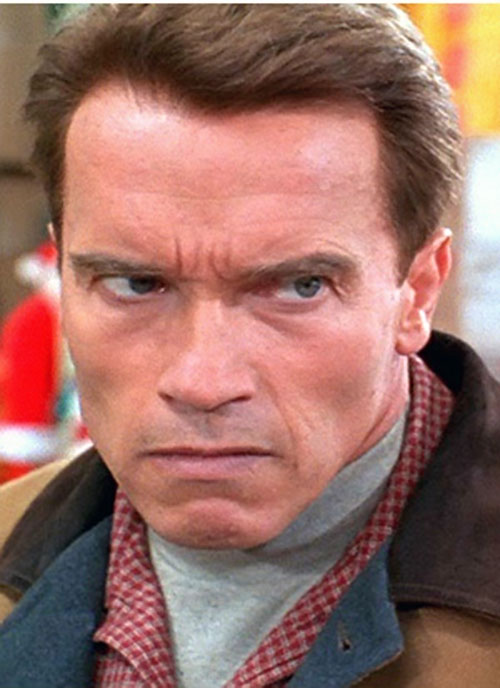 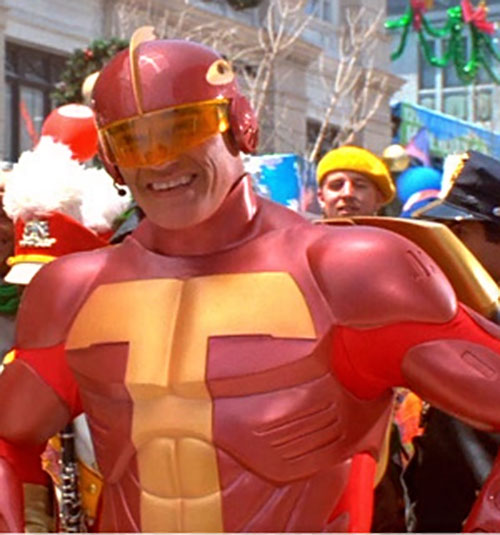 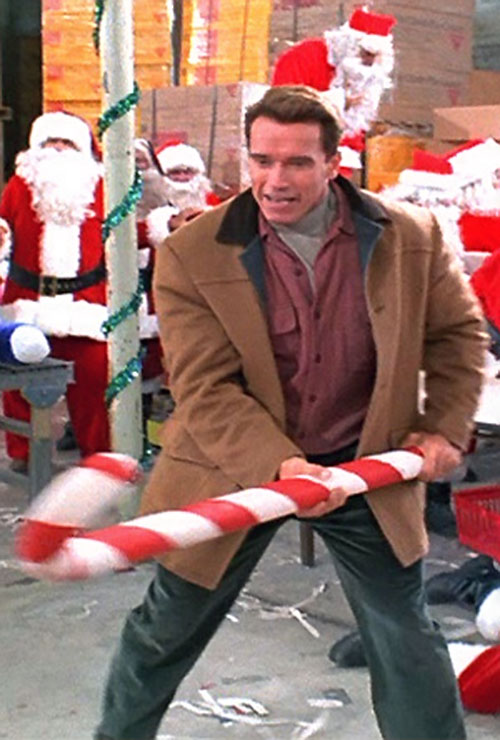 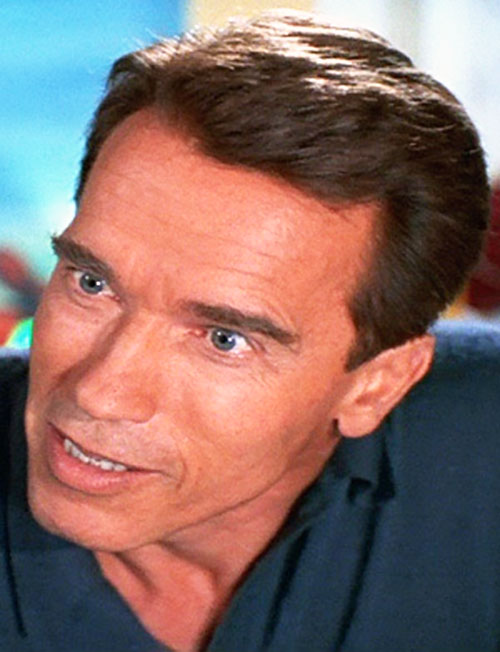 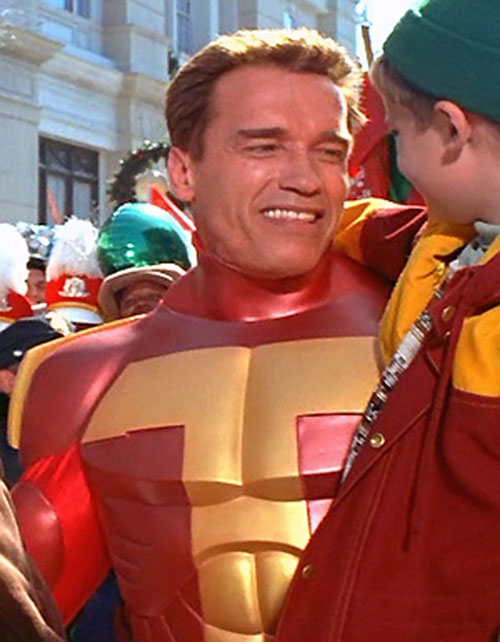 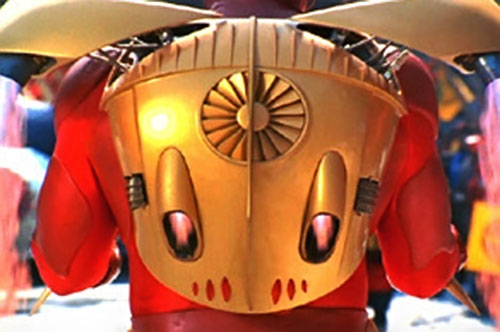 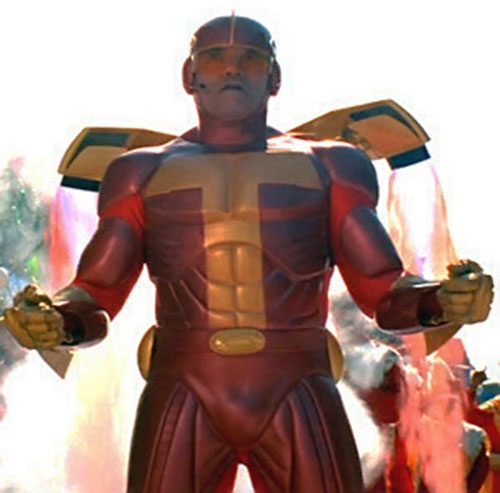 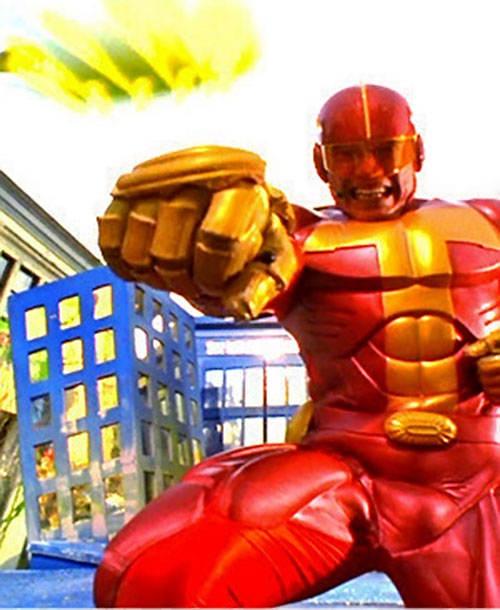 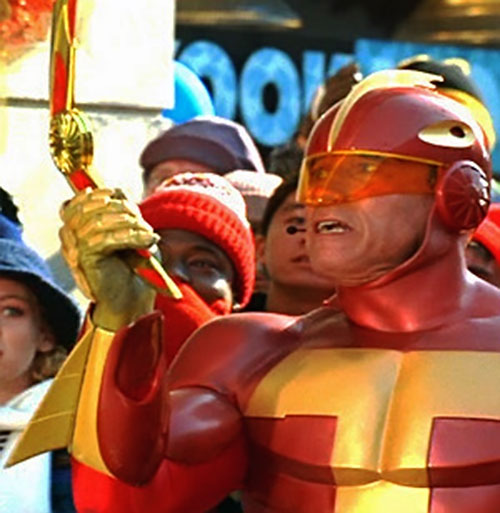