Joe Public can drain the strength of persons around him and reinforce his own might for a while. What usually happens is that he boosts his speed, agility, strength, edurance… (in DC Heroes RPG terms, Physical Attributes) while the persons get weaker. They may get so weak as to have difficulties standing.

Such a drain is often short-lived. In DC Heroes RPG terms, Joe Public can only drain 2 APs of STR from most persons, and these will be restored after but 2 APs of time. But given enough person “backing him up”, or the presence of powerful athletes or superhumans, Joe can achieve markedly superhuman levels of strength, speed and durability.

However, using this power seems painful and disconcerting (especially on superhumans and non-humans). Furthermore, Joe doesn’t quite understand how it works and how to trigger it. It was pretty much his last-ditch weapon. Yet with more experience, control and knowledge with his powers, Joe could easily have won his fights.

Experience eventually allowed for using his power in basic brawls. But that still required careful concentration.

Beyond his power, Joe doesn’t have much going for him. He’s fit and athletic, but not to a remarkable degree. He just spends a lot of time practising various sports. While he can do some athletic stunts, he has no combat training. And he has little experience with skills that are critical to a vigilante.

Howbeit, one incident (using the trunk of a small, dead tree as a club) gives the impression that he’s stronger than most scenes suggest. Joe may be practised in a sport emphasising raw strength and muscle.

After gaining his powers Joe seemed more agile. He could reliably perform standard rooftop-and-swingline acrobatics, even in difficult condition (such as rain).

Though Joe is out of his depth as a vigilante — never mind a super-hero — he thrives in a team context. He is experienced in team sports and as a coach. This translates fairly well to some aspect of working with a group of supers. He knows how to take charge, give pep talks, encourage teamwork and the like.

In DC Heroes RPG terms he even seems to have Leadership. But his low amount of Hero Points  means that he can only contribute a few points here and there.

Despite living and working in Gotham’s harsh East Side, “Joe Public” is an idealist. He wants society to be a better and kinder place. This might be why he became a teacher.

Not seeing himself as an academic, he focused on being a physical education teacher, working in a East Side high school.

In 1993, a group of senior students there procured pills of XTC from a street pusher. They went partying. As it turned out one of the seniors, one Tommy Vance, had an heart defect. Hwent into fatal cardiac arrest. His phys-ed teacher was devastated.

He tracked down the pusher and investigated his supplier. Over several weeks of amateur sleuthing, the teacher determined that the E had been coming from minor crime lord Happy Jack’s ring.

The teacher threw together a super-hero-ish costume with a patriotic theme. He hoped that luck and his good physical condition would carry the day against hardened, armed criminals.

His attempts to storm Happy Jack’s yacht in the harbour actually went pretty far. However, he ran into Batman (Bruce Wayne). The unexpected encounter allowed Happy Jack to stun both vigilantes with an electrical weapon, and escape.

Batman chewed Joe Public out and told him to stop acting like a vigilante. But Joe had spotted Happy Jack throwing a suitcase as he fled, and assumed that he would come back for it. He waited in ambush, and was proved right. However, he and the drugs lord were then attacked by a newcomer.

A number of monstrous alien parasites were then operating on Earth. They killed innocents and fed off their spinal fluid.

One of the monsters in Gotham spotted the two men and snatched them. It then flew to the small desert island where it held spare food. The drugs dealer was killed and the amateur vigilante was overpowered, with the alien draining his spinal fluid and leaving him for dead.

As happens in about 1% of cases, the teacher not only somehow survived, but exposure to the alien’s metabolism gave him super-powers. Spotting the unconscious Joe as they tracked down the alien, Batman and Pagan tried to drag him to safety. However, all humans on the island were soon overpowered by the parasite.

To his surprise, Joe instinctively absorbed the strength of all humans around him. He then engaged the alien in melee. He fared well, in no small parts thanks to Batman’s and Pagan’s strength. When he realised that his power was waning, Joe used one of the throwing stars on his costume. This wounded his opponent and forced it to flee.

Though victorious, and having received a quick explanation about how his power likely worked from Batman, Joe Public was shaken. He considered abandoning his vigilante pursuits.

However, the situation with the alien parasites escalated to all-out war. Upon learning that about 25 survivors had gained powers from alien attacks, President Clinton  called for them to volunteer and help. Only seven — plus Lionheart, a British citizen on US soil — responded.

These were Slingshot, Shadowstryke, Krag, Argus, Ballistic, Geist and Joe Public. Joe helped coordinate some of the younger superhumans on the scene, and the humans ultimately won.

Perhaps inspired by this, Joe Public made another attempt at street vigilantism. However he still lacked the right stuff for this type of work. And didn’t quite know how to use his powers, either. Another New Blood, Geist, met with him to join forces and they tried to approach the Justice League.

Two aggressive New Bloods (the villainous Wildman and the vaguely more benign Loose Cannon) involved themselves in the situation. The resulting fray led both Joe Public and Geist to the conclusion that they weren’t cut for superhuman fights.

For a few months, Joe Public nevertheless helped with local crises that looked manageable. He felt that he should do *something* with his power. He also stopped a few muggers, feeling proud to make a difference even if it was just for a few people.

Nevertheless it was Joe Public who won the fight by draining the Corrosive Man’s powers. Though this was particularly painful, Joe held onto the powers as long as he could. This made it possible for Batman to stop Mitchel.

Joe Public hasn’t been seen since.

Joe Public is an idealist. He’s appalled by greed and predatory behaviour, and he’d like to do his part. He holds a certain anger within him about how evil some people act, and how society leaves so many issues to fester and people to rot. He also understands the good that heroes can do in a comic book world.

However, going from these feelings to action is way more difficult than he hoped it would. Joe Public has gradually come to realise that he simply isn’t cut for superhuman crises or the tenser sort of police work.

The little successes he scrounged along the way made him realise that it was mostly a matter of training and being taught. Yet, weirdly enough, nobody ever showed interested in helping him develop his abilities.

There’s something in Joe Public’s values and way to speak that somehow always remember people of a high school teacher they knew as teenagers. He comes across a well-meaning mentor type who goes long on positive platitudes and rehearsed phrases about morals.

That doesn’t make Joe sound like an idiot. More like a stock character from a dated movie about baseball or somesuch.

A working class hero is something to be

Joe Public clearly sees himself as working class and a physical type rather than an intellectual. He seems to have a low opinion about his intelligence. This doesn’t seem supported by his actual abilities. He appeared to be reasonably bright and observant.

While his costume is rife with patriotic themes (eagles, stars, tricolour shields, military fatigues and combat boots, etc.) his dialogue and behaviour didn’t indicate any special nationalistic fervour. One gets the impression that he felt that a heroic costume needed to bear symbols, and what came to mind that looked cool and he could be proud of were those of the United States.

Joe seemed pugnacious, but mostly in the long term. As the heroes he ran into kept acting like jerks and he didn’t get traction, he was visibly crestfallen. He decided to give up on several occasions, but within weeks he came back to wanting to help people and putting his ability to good use.

“This is what you’re looking for, scumball ? I knew your greed would bring you back ! Bloodsucker ! Peddling dope to school kids… you ought to be executed as a favour to humanity !”

“You’re Mongrel, right ? I’m not asking you to stop fighting this thing, I’m asking you to fight it together. Teamwork, my friend ! By combining your talents, you’ll find that you may complement each other in unanticipated ways.”

“All I ever wanted was to be a good teacher, maybe have a team in the national school football league.”

“I’d… kind of like to press on. It feels good, helping people. Say ! Would you be willing to teach me ? I’m not rich, but I could afford to pay you something.”

Most New Bloods have relatively few appearances, and thus end up with some generic-ish scores since there’s not enough material to benchmark them further.

Though the Power may seem detailed, it’s not based on extensive observation (there’s way too little material). It’s based on quick math to represent the two documented uses. 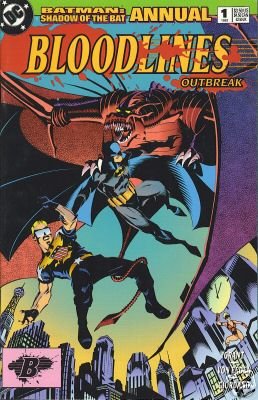 Shadow of the Bat annual #1 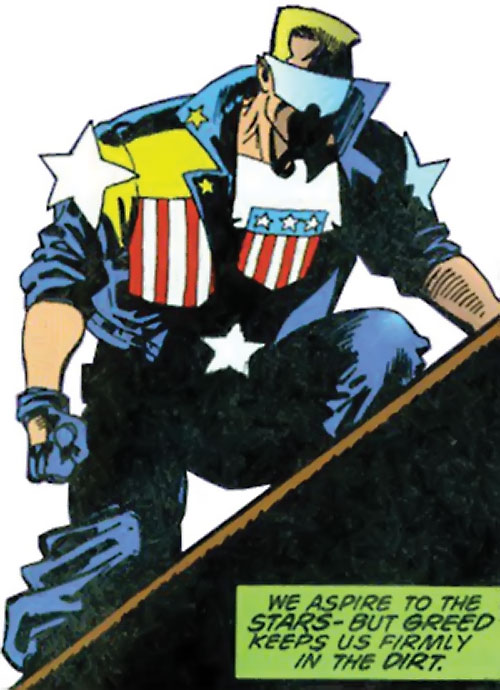 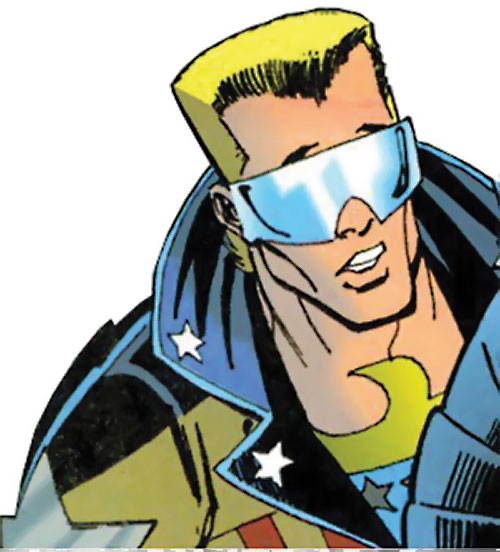 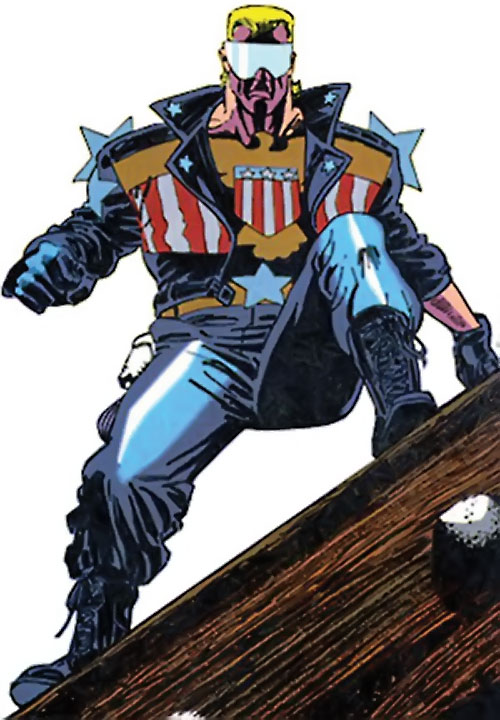 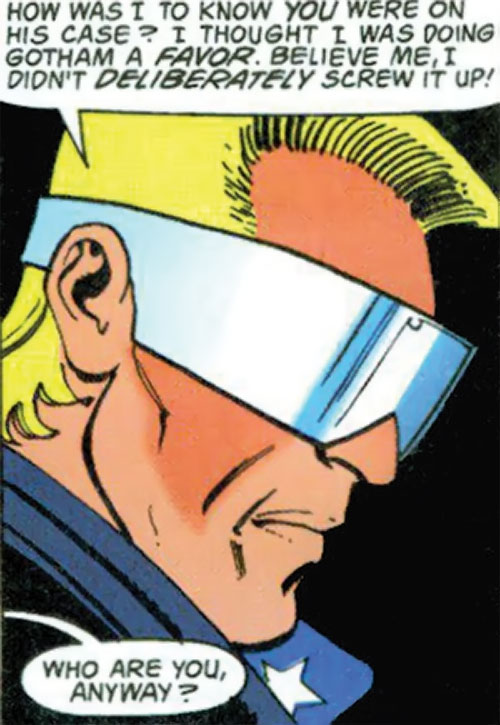