Joe is not particularly skilled at anything. But he has enough common sense to know a little bit of everything. His skillset includes:

While having no scientific background whatsoever, he is naturally a fairly good user and manager of technological gadgets. Thus, Joe is capable of reprogramming a computer using a manual, understanding when a gadget is broken and what needs to be replaced, etc.. In DC Heroes RPG terms, he likely often spends Hero Points  on his Gadgetry Skill.

He is also an expert at all types of janitorial works and routines. Over time, during his adventures, Joe developed an intuitive sense for which odd piece of lying around equipment might be useful for a specific purpose later on.

Joe worked a brief time in the United States Military, and then moved on to various odd jobs, such as toilet cleaner, etc.. He eventually ended up as janitor at the Archon Research Facility in 1972. One day, arriving at work, he was called up to his CEO Mr. Hill.

Another day at work

Hill informed him that his colleague and janitorial superior Frank had left Archon the previous day. And so, Joe was promoted to perform Frank’s old duties.

While thinking it odd that his friend Frank had just disappeared, Joe still accepted his new work position. Thus, he gained access to the lower labs where Frank had used to work. On his way to his new position, Joe discovered some blood and a tinfoil hat in the elevator. He thought that it must have been a nose bleeding incident.

However, exiting the elevator, Joe found a trail of blood leading straight to one of the sealed testing chambers. Getting scared, Joe returned to talk to Mr. Hill. But he was turned down by his secretary who just thought that Joe had injured himself carelessly.

So Joe returned to the basement laboratory, to help whoever was hurt inside. Cleverly tricking the security system, Joe entered and found a wounded old man. The man was still alive. 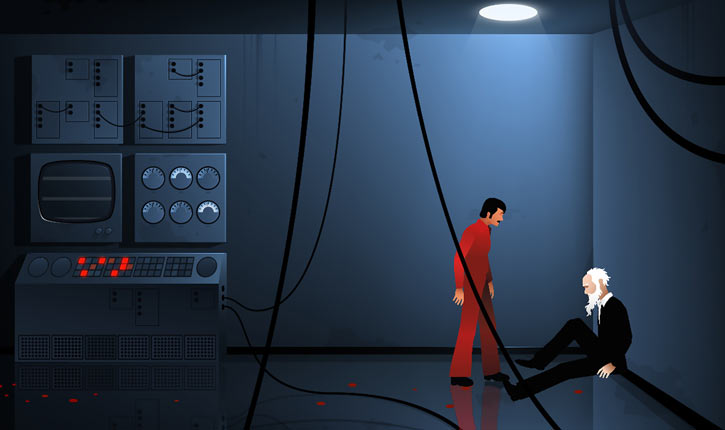 He claimed to be a time traveler from a horrible future where mankind was very close to extinction. In his own attempt to save mankind by time travelling he had been lethally wounded by a gunshot wound and was now lying there.

Before falling unconscious, only to die soon afterwards, the old man gave Joe a solar-powered portable time travel device. He instructed him to find his present time counterpart to inform him of the impending doom. As Joe pondered the words of the stranger, security forces arrived, and handed him over to the police who arrested him for charges of murder of the stranger.

Being questioned by the police, whom Joe told everything he knew. He then pushed the time travel device, and was instantly transported to a ran down and abandoned police station.

Joe looks like a non-descript, stereotypical male of the 1972. He wears his red janitor jumpsuit, has black hair and a black moustache. I theorize that Joe really represents the Average Joe.

Joe is a humble average Joe. He believes in always doing his thing and keeping a low profile. He does not believe in violence, or confrontation, and has relatively strict morals about what is allowed and not allowed, even in a post-apocalyptic setting. He has little drive to rise “above his position” and has little career ambitions, just being content with being where and what he is.

He is a team player – even though he is lacking complex social skills – and an excellent employee keeping his nose clean and fulfilling his obligations. He had few friends, apparently only being friends with his colleague Frank, another janitor, with whom he would on occasion have a beer or two. 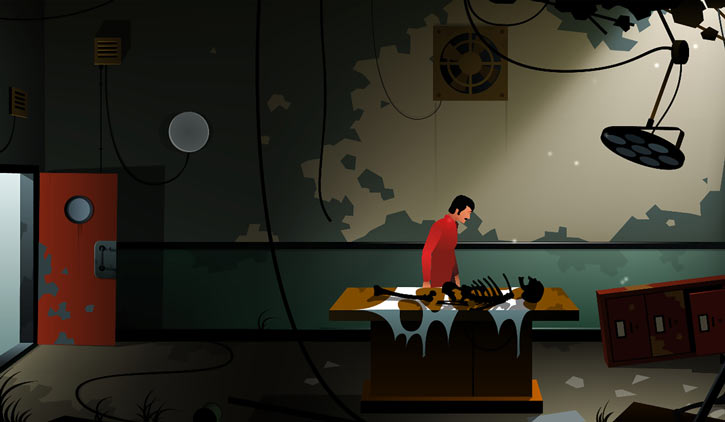 Joe is surprisingly cool about things, even if his inner monologue talks about torments and hardships. Once he was involuntarily put into the position of saving the world he did not complain about the matter overly much. Instead he accepted the responsibility with a heavy heart, and then just got going. He would no doubt work to save the world until his death.

He is, to me, an example, of an average man rising to new heights and determinations by the end of the world.

“No matter how many times I flip that switch I never get used to it. I still don’t know how it happened. Everyone is gone. And here I am chasing some guy from the future. It’s so quiet here. It’s almost deafening. Well, I guess it falls to me now.”

“Sweet mercy, it’s like riding sidecar with a unicorn down a mountain of cashmere sweaters.”

“Something’s definitely missing from the panel and if I don’t find it I’m going to be stuck here forever. Which – from the sounds my stomach’s making – might not be that long.”

Actually, the story fits well in parallel with that of the Army of the 12 Monkeys movie (and TV-series). Joe could be yet another one of the time-travelers involved in that quest to save mankind.

Equipment:
Portable Time Travel device [BODY 02, Time Travel: 28, Solar Sustenance: 03, Energy Absorption: 02, Miniaturisation: 06, Limitation: Devoid of direct sunlight (or an artificial solar lamp) the use of the device is turned down to Charges of 1. However, once in direct sunlight, the device immediately regains “infinite” charges. Notes: Under unclear lightning conditions, the device will become non-functional only when failing a R#3 roll.].

The device is small, round and attached to his wrist. It it activated by the press of a button and can only chronally replace the user, and everything he carries, between two preset time-points. Joe himself does not have enough scientific knowledge to reprogram this himself. In the game these points were usually set in 1972 and 2012, respectively, i.e. in pre- and post-apocalytic times.

The user is only relocated in time, but not in space, meaning that it is possible to materialize inside an object at the destination time, which would result in instant death, but that luckily never happened to Joe (unlike other time-travelers using the same technology).

In most regards, Joe appears to be a natural at everything he does, with nothing suggesting previous experience or training of any kind (besides marksmanship in the army). This is the reason for all of his Linked (*) abilities, and in some cases even impressively Double-Linked ((DL)*) abilities.

For example, he was an excellent climber, could read complex maps and coordinate systems, pick locks expertedly, drive both trucks and motorboats, could set fires properly, could remove weeds, insects, etc. very efficiently, and so on.

In MEGS terms, Joe, furthermore, sometimes appears to have fairly high Identify Gadget and Repair Gadget subskills. For this reason, those APs are Unlinked and higher than what would perhaps be expected given his known background and character.

One can perhaps assume that he learned new technologies during his time-travel adventures, and, actually, the end of the game, without spoiling anything, also suggests that he fairly easily picks up new technical knowledge intuitively.

Since he appears to be around 4.5 APs in the Skill level, he was also given the Edge advantage in order to allow him to spend enough HPs to succeed at the harder quests. 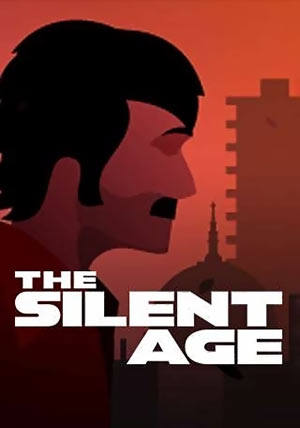 Steam key plus DRM-free download from the humble store
Advertisement