One of the most skilled martial artists on the planet, even the other Immortal Weapons respect the Prince of Orphans abilities.

Able to transform himself into a green mist, John usually uses this ability in combat. This makes him almost impossible to hurt, while allowing him to become solid long enough to make contact with his opponent.

His mist form can extend out to around 20 feet, allowing him to grapple multiple spaced out opponents. Furthermore, he appears able to teleport vast distances while in this form.

His mist form also allows him to interact with lingering spirits, who are able to harm him as though he were solid.

John Aman is heavily based on the character of the same name who became Amazing-Man, published by Centaur Publications  in 1939. Snippets of his history given in the Defenders (2012 run) appearances even duplicate much of his history.

However, the Defenders series retcons most of its events by the end of the run. And the backstory presented has slight discrepancies with his existing history. Thus, it is unclear how much of his history from Defenders (such as being a psychotic mass murderer) is in continuity.

While I’ve used the initial origin, the other stuff from the Defenders series is kept in the “Guardian of the Concordance Engine” sections.

The orphan John Aman was chosen by the Council of Seven for his superb physical structure. He was raised by them in Tibet, where they trained him to superhuman degrees of physical and mental ability. 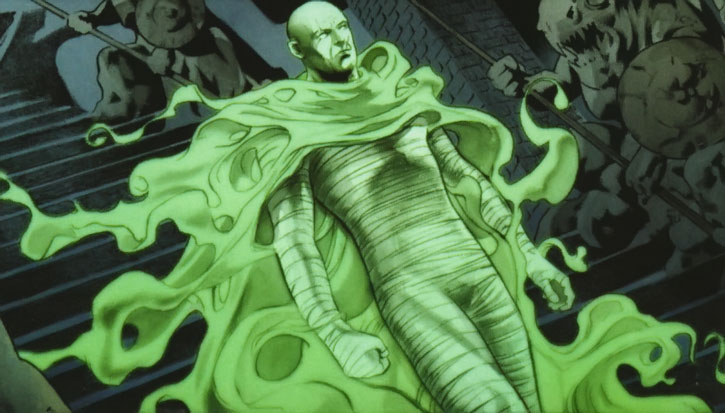 Passing unrevealed tests he became the Prince of Orphans, the Immortal Weapon of one of the Seven Heavenly Cities.

Every 88 years the Seven Cities came into alignment and a tournament was held between their champions. Following the betrayal of K’un Lun by their champion, Iron Fist (Orson Randall), and the death of another champion as a result, the Prince of Orphans was dispatched to kill Randall.

John hunted his former friend across the globe, clashing with him and his associates, the Confederates of the Curious. John came close to killing him a few times, but his reluctance to harm others while doing so got in the way.

The Fist knows the truth

John eventually investigated Orson’s claims that the masters of the Seven Cities had lied to their inhabitants for a long time. He discovered they’d had Orson’s father create gateways allowing access to Earth at any time, without informing their people.

He made peace with Orson, allowing him to disappear for decades. Before they parted, Orson told John the symbol which would identify him as part of the Thunderer’s planned revolution.

John continued spending time on Earth – particularly in the African country of Z’Gambo, where he set up base. He assisted Captain America (Steve Rogers) a couple of times during the second world war.

John attended the next Tournament, meeting Orson’s successor, Daniel Rand. John also made contact with the revolution, as they prepared to make their move.

Events were complicated by a Hydra operation to attack the Seven Cities, which nearly succeeded due to their knowledge of the secret gates. John, as the most respected of the Weapons, lent Rand his backing to convince the other Weapons of the threat.

Combining their powers they defeated Hydra, and revealed the truth about the gates. Yu-Ti was overthrown, although the after-effects of the revelations in the other Cities is unrevealed.

Having learnt of the possibility of a hidden Eighth City during the fight, most of the Immortal Weapons returned to Earth with Iron Fist to search for it.

Finally locating the entrance to the Eighth City, the Weapons had to meditate in order to access the sealed dimensional doorway. Once they got through they discovered the city was a prison.

Originally used for traitors to the cities, it had then become a place to dispose of any unwelcome individuals, including the first Iron Fist, Quan Yaozu.

Quan had become dictator of the city, embittered by his fate and hardened by the conditions he found there. Capturing the Weapons, he forced them to fight in the arena, biding his time.

When they escaped and opened the gate between the Eighth City and Earth, Quan’s forces attacked in full force. The Weapons fought him, as Daniel Rand tried to talk Quan down, to convince him the regime which had sent him to the Eighth City had fallen.

When Rand saved Quan’s life, the original Iron Fist accepted he may be telling the truth. He returned to K’un Lun to see for himself. The rest of the prisoners were also allowed to return home.

Among the sites around the world John Aman kept an eye on was the resting place of the Loyal Ten Thousand. Great warriors who’d been betrayed by their lord and left to die, their angry souls had lain guarded for two millennia by an ancient dragon. But the dragon was dying.

John recruited Rand to deal with the dragon while he faced the ghosts. Attempts to reason with General Sheng failed, and Sheng led the army to take their revenge on Kunming City. The Prince of Orphans followed, battling his way through the horde.

Executing the General, he entreated the ghost army to pass on to their rest. They did.

Called on by Steve Rogers, John stopped agents of the Shadow Council abducting Shang Chi. They’d revived his father, formerly known as Fu Manchu [although Marvel can no longer use that name], and required Shang Chi as a sacrifice to fully restore his father’s life.

They escaped, and worked with Rogers’ Secret Avengers to hunt down the Shadow Council. Shang Chi was forced to surrender to them in exchange for the captive Sharon Carter, but the team caught up in time to disrupt the ceremony, sending his father back to the dead.

Guardian of the Concordance Engine

(The events of this story were undone at the end, and it’s unclear how much of the historical stuff is still valid.)

During his early journeys across the globe John joined with a group of other adventurers who included Princess Fen of Atlantis; adventurer Leonard Mackenzie; Captain Nemo; Ivar the strong; Orissa Krakinov the aviatrix; Farraday Bobbs the writer; Musidora the thief, and Judex the shadow. 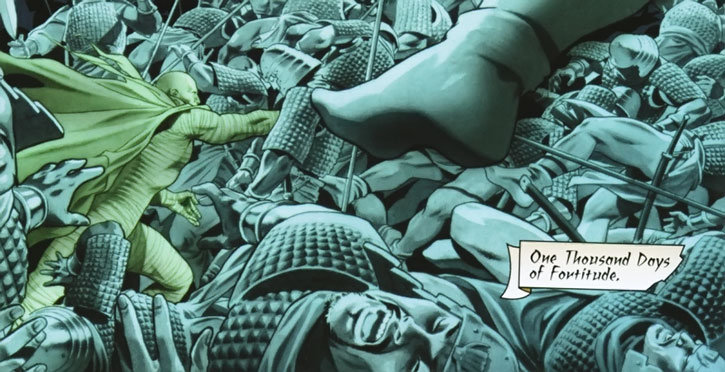 They discovered a Concordance Engine beneath the top of the world, and decided to protect it. They moved it to John’s base in the African country of Z’Gambo.

They came into conflict with Orson Randall’s Confederates of the Curious, who were also interested in the device, inciting an enmity between the groups.

The last of us

The only survivor of the group over the decades, John became sole guardian of the Engine. He split into it three brass frogs, one of which he kept for himself. At some point, presumably in the not too distant past, he came to power in Z’Gambo by killing its population in order to protect the Engine.

On learning Rand and his group had discovered another Engine, John hunted and killed Dog Brother #1, Bride of Nine Spiders, and Tiger’s Beautiful Daughter. He also badly beat Fat Cobra.

On confronting Rand, John learned it hadn’t been the Immortal Weapons who’d discovered the Engine, but the Defenders team Rand had joined. He was inhaled by the Silver Surfer, who spat him into a volcano.

John survived, and returned to Z’Gambo. When the Defenders went to neighbouring Wakanda for advice, John infiltrated the Panther Spirit realm where they were communicating with the Black Panther’s ancestors. John killed T’Challa and withdrew.

The Defenders soon arrived in Z’Gambo, at the same time the Council of Antiquarians sent the Black Cat to steal the third frog. John was apparently beaten in the fight, but when the frog was reunited with the other two on the Antiquarian’s ship, he took control of the Engine’s power. He killed the Council, and sent the Defenders to another reality.

Despite his efforts, the Death Celestials — whom the Engines had been created to fight — were drawn to Earth by the Defenders’ messing. They began extinguishing all life on the planet.

How much of history was changed is unclear, as is whether the Defenders were successful in dealing with the Death Celestials.

The clash between Aman’s group and the Orson’s Confederates could have occurred after Orson and John had made peace. In protecting the Engine, Aman would be willing to kill Orson’s associates and would be unlikely to make peace.

I’m fairly certain though — from the timeline spread through a few stories — that they make peace after the Confederates have drifted apart.

Given the discrepancy in this, and in Aman’s personality being revealed as borderline psychotic, it’s possible the Defenders finding their Concordance Engine altered history so Aman’s group found the other in the past, changing John’s history with Orson.

If so the reset may have changed him back into a hero. Or he may still be a hidden psychopath waiting to murder anyone who gets too close to the truth.

Calm and reserved, the Prince of Orphans is unflappable, dealing with anything that comes his way in his usual impassive – and intimidating – manner. Being the oldest of the Immortal Weapons, the others view him as a kind of mentor figure, and he does what he can to guide them.

As guardian of the Concordance Engine, John Aman is a fanatic, killing anyone who gets in the way of his protecting the planet from the attention of the Death Celestials. Nothing has priority over that, and he will manipulate and kill friends, commit genocide, and basically do anything to remove even the slightest threat.

“This is a tournament, child. And men like ourselves are nothing without rules.”

“This is a tournament both ancient and honourable, with traditions and rules for all of its combatants. It is not a murder carnival. The tragic events of the last tournament seem to have clouded the purpose of the thing in your minds. If one more unnecessary drop of blood is spilled, you will pay the price. We are warriors, not killers.”

“Do you know why I wander the Earth, Daniel ? The Earth is a reality from which all others are mere deviations. That may sound egocentric, but it is true nevertheless. She attracts things like a moth to a flame. Often these things require assistance to leave.”

The Ghost Fox Women that Ghost Fox Killer serves imbued John with his powers as part of their debt to the Council of Seven, but are less than happy about the ongoing debt.

This has caused friction with Ghost Fox Killer, and he’s consequently steered clear of the Great Ten.

John Aman, The Prince of Orphans

Guardian of the Concordance Engine

In the 2012 Defenders series, which may or may not be in continuity at this point, John displays other abilities. He can :

He also has access to the Concordance Engine’s powers. He split the engine into three parts, two of which became known as King Solomon’s Frogs. The other one he kept with him.

The extent of it’s abilities is unknown, but the Engine as a whole grant’s a person’s wishes, even if just from a stray thought [Sorcery: 20, and Spirit: 20 which Subs for the wisher’s when determining Mystic Bashing Damage from Sorcery].

His Motivation is closer to Psychopath in this incarnation.

My initial choice to model his mist form was Self-Link (Spirit Travel): 03, due to his ability to interact with ghosts. But there are a few instances where his mist is treated as physical, and he can actually be harmed, so Fluid Form is more accurate, despite needing the extra Bonus.

While he’s able to hide within individuals in mist form, its unclear whether he has any control over their actions. If so, he may have around 5 APs of Personality Transfer.

From one scene it appears he has either teleportation abilities, or can project his image and voice over great distances. Teleportation feels more in line with his other abilities, so that’s what I’ve gone with. 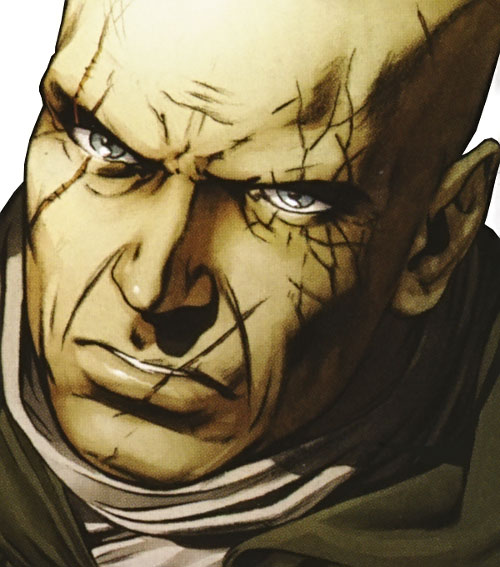 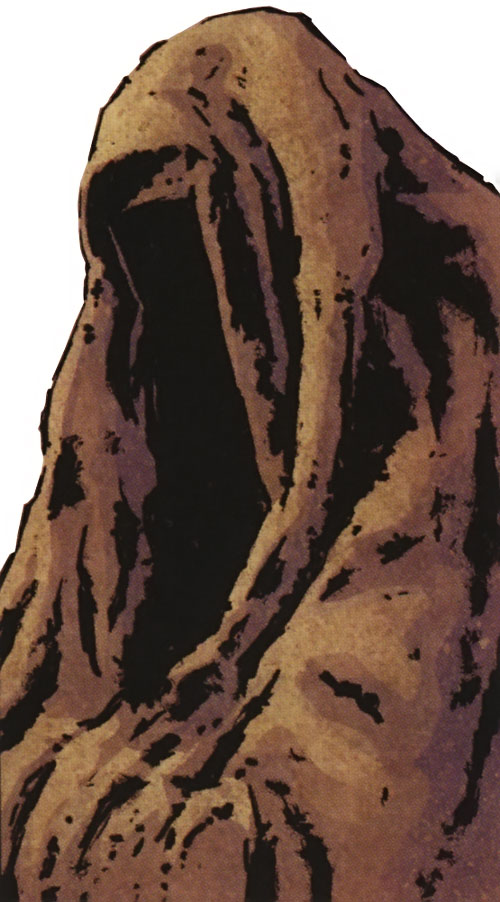 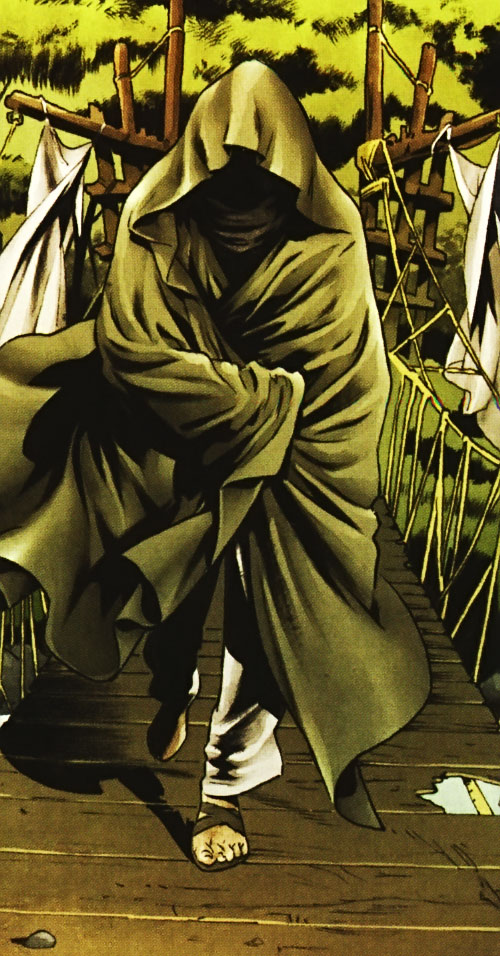 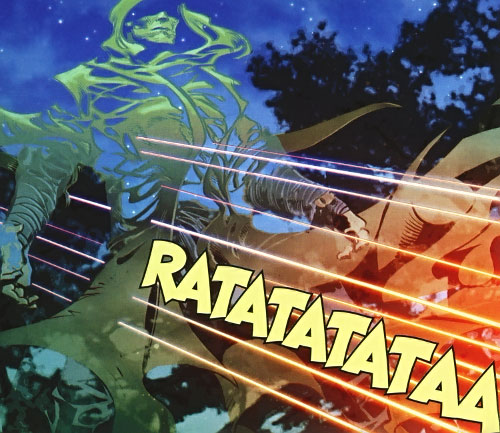