Garrett has been rebuilt as a cyborg, and is almost completely artificial. Less than 20% of his organic parts remained when he had to be rebuilt. Replaced parts include his arms, legs, spine, nervous system, heart, liver, and lungs.

He has plastic skin, and metal alloy in his bones. Those allow him to withstand most street-level weaponry, although extremely sharp swords wielded by Hand ninja experts have proved dangerous to him. His pneumatic, hydraulic and electrically powered muscular system allows him to punch through cinder blocks, or break skulls with a well-placed kick.

Although Garrett is a thick-headed cretin, he has extensive combat experience, a solid killer instinct and excellent tactical acumen. He’s also unusually adept at handling advanced technology such as guns, guns or guns (and big macho vehicles, too).

He’s an excellent marksman and an experienced agent when it comes to working as a heavy. As long as no subtlety or social skills are needed.

Garrett lived most of his life as a usual suspect and criminal. He served time for assault and grand larceny. His record also bears numerous counts of resisting arrest, various cases of battery and statutory rape – plus at least 65 counts for drunk and disorderly conduct.

Such a record would normally prevent employment by S.H.I.E.L.D.. But Garrett was illegally recruited by a branch of S.H.I.E.L.D., ExTechOp, that specialises in the development and field testing of cyborg agents.

ExTechOp had an agenda of its own and a major corruption problem. Hiring a tough guy with an history of irresponsible behaviour and a long criminal record didn’t bother them.

They give you a number and take away your name

Garrett received a cybernetic right hand. He also had a small compartment created at the top of his partly artificial skull – which could hold, for instance, a recorder. These were likely intended to replace a missing hand and fix a cranial trauma. Agent Garrett joined normal S.H.I.E.L.D. agents on missions when he wasn’t working on specific ExTechOp business.

Garrett was noted for his impressive skill in combat. But he acted like a chauvinist pig, lied in his reports, didn’t respect S.H.I.E.L.D. personal hygiene standards, etc.. All the while ExTechOp kept burying bad reports about him.

Garrett and his partner, a dangerous sadist called Perry, eventually got outmuscled in Latin America. The dreaded international assassin Elektra easily defeated them. She left them to die in an ammunition depot rigged to explode. Garrett and Perry were blown to bits.

For ExTechOp, it was an opportunity to experiment even more. They rebuilt their agents, turning them into 80% conversion cyborgs in record time.

However, Garrett had caught Elektra’s attention. This is how he became embroiled in her savage war against the Hand.

Elektra was fighting to prevent the Hand from having an agent of theirs, Ken Wind, become President of the US. She played complex psychic ninja games with Garrett’s mind, using him as her useful idiot against the Hand. Meanwhile Garrett was hopelessly lost in his sexual and power fantasies about her, and understood little of what was going on.

Elektra won her battle against the Hand. Afterward, Garrett was lost for months in the telepathically-induced delusion that Elektra had switched his mind with Ken Wind’s. Thus, Garrett led an hallucinatory life where has was, in Wind’s body, the President.

She is death incarnate

The psychic manipulations had imprinted part of Elektra’s soul onto Garrett’s mind. This made him a prize for her most knowledgeable enemies.

Thus, a faction of the Hand called the Snakeroot broke into a S.H.I.E.L.D. facility and recovered Garrett’s dismantled body. They then worked to both reconstruct his body, and build an independent consciousness based on Elektra’s imprint on Garrett’s psyche.

Both projects succeeded. The reconstructed consciousness — a dark, bestial version of Elektra — was called Erynys and implanted within a resurrected corpse.

Those mystical events and the subsequent confrontations with Daredevil and Elektra flew miles above Garrett’s head. John was severely confused by the two Elektras – the real one, and Erynys, whom he originally thought was the real one. This was further complicated since Garrett had persuaded himself Elektra craved having sex with him.

While Fury hated Garrett and considered him a disgrace, he decided to keep him on reserve status. This way Garrett was both at arm’s length and obligated to follow S.H.I.E.L.D. rules of conduct, so he wouldn’t make too much of a mess. To stress his point, Fury had the powerful war cyborg Siege make it clear to Garrett that he was watching him.

Garrett then started to look for work, but nobody would believe him when he said he was former S.H.I.E.L.D.. He started answered classifieds for private investigation work.

This is how wound up meeting Karen Page, who at that point was looking for a tough guy to take down a child pornography ring. Garrett, who crashed through her door and shot down three cockroaches with a huge pistol before he even said hello, got the job.

A violent alcoholic and borderline sociopath. Garrett is crude, offensive and, to paraphrase a French expression, tends to approach problems by slamming his penis on the table. He likes pissing people off with his macho cowboy behaviour. He has no respect whatsoever for women, with whom he will easily become frisky if they are attractive – even fellow S.H.I.E.L.D. agents.

He swears a lot and prefer huge, phallic guns. When S.H.I.E.L.D. forced him to be armed with a mere regulation .38, he felt deeply insulted.

While Garrett is shallow and has trouble handling analysis and deduction work, one should not underestimate him because of his primate-like grandstanding, alcoholism and vulgar tastes. He *does* have remarkable tactical acumen, and is an excellent fighter.

“Maybe I’m losing my mind. Maybe I give a shit.”

“I aim this baby at your side of the planet and you’re in pieces, bitch.”

Would make for a dandy DEO agent. He’d even teamed up with Chase once, with horrifying results. 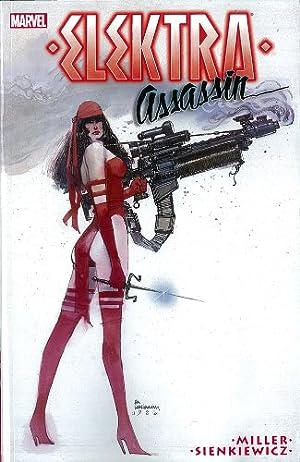 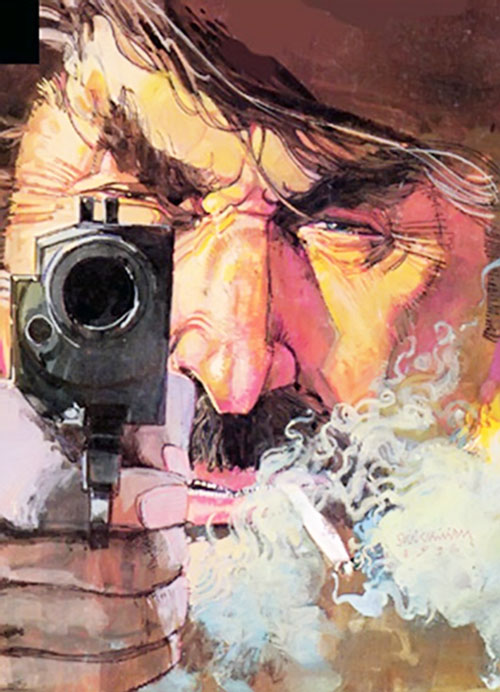