DC: The New Frontier is a stand-alone graphic novel, celebrated for its art and storytelling. It features an imaginary version of the DC Universe from 1945 to the 1960s, and its transition from the Golden Age  to the Silver Age .

The New Frontier is steeped into the historical events of the era. “John Henry” (he doesn’t really use a nom de guerre) is thus a new character, an anti-KKK masked vigilante bringing the struggle for the Civil Rights into the storytelling.

Though this profile has been kept short, there are S P O I L E R S.

“John Henry” was apparently a professional blacksmith and mechanic, as well as a distinguished veteran of the Korean War.

Although he was not actually huge, he was very muscular and extraordinarily strong for his size. He also looked bigger than he actually was due to his sheer presence and resolve.

In the New Frontier continuity, John Wilson fought in Korea. Upon his discharge he moved to Knoxville, Tennessee, where he took work in a machine shop.

His wife and daughter were killed in the blaze, which he barely survived. Mr Wilson was lynched in a nearby tree. But after the Klansmen walked away the branch broke, in part due to the heat from a nearby burning cross. John thus survived the hanging.

The police would soon accuse him of having set the fire and killed his own family.

What a man with a hammer can do

In shock, the veteran walked away and went to his forge. There, singing the ballad of John Henry to himself, he crafted two replicas of the legendary 20-pound hammers wielded by the steel drivin’ man. With those two hammers and an executioner’s hood, the hanging rope still around his neck, the survivor started his revenge.

When Klansmen burned a “Negro church” and murdered those trapped within, Mr. Wilson silently walked to them, hammers in hand, and did what he did.

Over a three months period, his guerilla warfare terrified the Klan. He killed two men and wounded dozens. Having fought against oppression in Korea, he was now fighting another totalitarian rule at home. Eventually a large Klan posse managed to kill him.

Though of course the police buried the incident, reporters told the story on popular TV show The Big Picture. This resulted in national scandal and marking yet another step in the Civil Rights Movement. The Big Picture compared the anonymous vigilante to the legendary John Henry, which is how he probably was remembered.

”John Henry” had been badly burned during the arson of his home.

Largely unknown, though I picture him like John Rambo in the original novel – a hardened veteran who has been shellshocked by tragedy and is now a superb guerilla fighter.

The captions during his segments quote from The Ballad of John Henry, which I would assume the man was singing to himself to take heart.

“John Henry told the captain that a man is just a man, and I swear by all that’s right and wrong I’ll kill you where you stand.”

“John Henry kissed his hammer, kissed it with a groan ; sighed a sigh and closed his eyes, said ‘wife, I’m coming home’”. 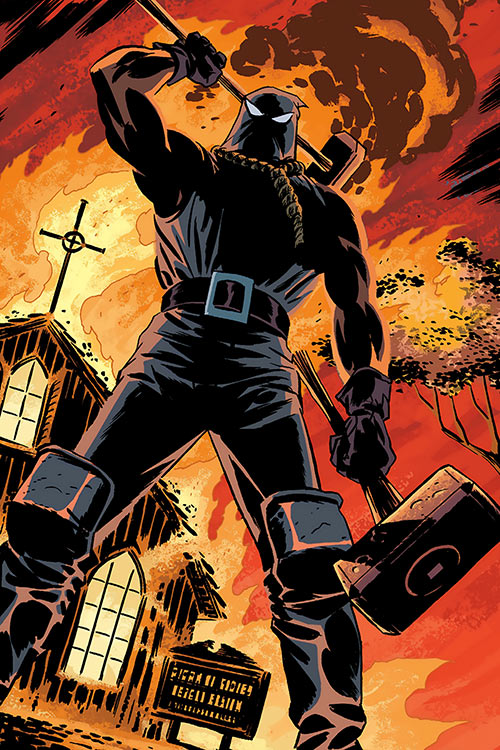 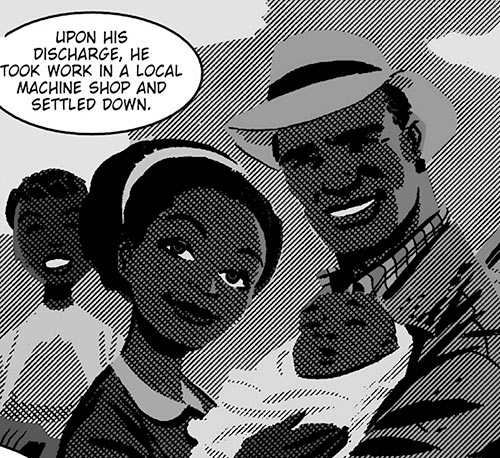