At birth, he could sing in a beautiful, deep voice, speak remarkably eloquently, extinguish a fire with his spittle from across the room, and break out of his crib.

Then he got bigger and smarter, until he was the best “steel man” working for any railroad company. So powerful was his swing, in fact, that the breeze from his hammer could easily topple a grown man.

He also apparently learned to play the banjo.

A version of the Ballad of John Henry to listen to as you read.

On a grim night, filled with a lunar eclipse, a thunderstorm arose from nowhere. Rain and lightning shook the midwest, causing even the panthers to scream like children. Into this world, John Henry was born to enslaved parents on the banks of the Black River in North Carolina, weighing in at 44 pounds, speaking—no, singing about his destiny to come.

At this, hunger swelled within him, and he demanded dinner of his parents and nurse, and broke free of his crib in a tantrum. Years passed with the family, and John eventually was freed at the end of the American Civil War, and found work (as he predicted, himself, as an infant) with the C&O Railroad.

During this time, he met his love Mary Magdalene, who would visit the tunnel he was digging just to hear his hammer ring. He also met Lucy Ann, a nurse to whom Henry was also romantically linked when he once fell ill.

A fate set in stone

Henry’s life began racing to its conclusion. The work Captain declared that he would be purchasing a steam drill, in order to cut costs. This would presumably also cut the jobs of his work crew. Infuriated, Henry wagered with the Captain for the jobs of his people. If Henry could beat out the steam drill, the people would be kept and the drill returned.

He returned home to find Mary Magdalene dead, and sought comfort in the arms of Pollie Ann—another steel-driver, astoundingly enough—who he married nearly on the spot.

The contest took place on the hottest day of the year, sun shining, and no breeze. Henry walked into the stifling tunnel with the drill, his sledgehammer in his hand, and for the first time in his life, cried with silent prayer.

With John Henry working the right-hand rail, and the steam drill on the left, the race was on. He was cheered on by his associates, and heckled by the steam drill’s inventor and driver. Henry’s response was merely to warn his shaker (spike-setter) to remain steady.

A man with a hammer

The steam drill pulled ahead, and Henry was about to lose, when he made a desperate gamble and hefted a second sledgehammer. With the added “strike,” and moving so fast that his hammers caught fire, Henry eliminated the machine’s lead.

John then pulled far past it, when the machine broke down, completing nearly five yards of track in the time the steam drill completed three.

Alas, however, the strain on Henry’s body took its toll. Henry emerged from the tunnel to the congratulations of his fellow workers, but then collapsed on the ground, laid down his hammers, and died, his internal organs utterly destroyed.

Upon his death, Pollie Ann felt compelled immediately to visit the site of his death. His poor, aged mother refused to leave her bed, shouting to those wishing to bring her the news that her son was not dead. Upon Pollie’s arriving at Big Bend, the workers followed through on Henry’s dying wish : she was presented with his hammers, wrapped gracefully in gold leaf.

It is said that one can still hear him hammering away in the night breeze.

Interestingly, while it (of course) cannot be proven that John Henry actually existed, there are numerous, reasonably consistent reports of people of the time who claim to have met him. Clearly, our game statistics would be too far exaggerated for the actual man, should he have existed, but perhaps not by much.

John Henry is a massive (for the time, at least) and handsome black man. The spark of intelligence blazing in his eyes rivaled only by such characters as Batman and Steel.

Given his line of work, he probably wears relatively tight-fitting clothing, if any (to minimize the build-up of heat) when working. Perhaps he shaves his head.

While clearly a brilliant and spiritual man, John Henry also has a temper which frightens even himself. He was, however, able to control himself extremely well when saving the livelihood of those he cared about.

John Henry also apparently had an immense appetite, and would often request absurdly huge meals, downing them in an instant.

“Before that steam drill shall beat me down, I’ll die with my hammer in my hand.”

Well, the modern DCU has sledgehammer-toting Steel, a.k.a., John Henry Irons. Anyone thinking there wasn’t already a connection will be whacked around for a few minutes. Henry was Steel’s inspiration, if nothing else.

A possible idea is for Irons to be the reincarnation of John Henry, who will one day be doomed to die when outracing some technological assault, sacrificing his life for humanity.

That being a little grim, John Henry’s spirit may still be restless even after a century, and needs Steel’s help in quelling the pain he feels (seeking out the fate of Pollie ? Or keeping his hammers out of the hands of some villain ?).

On a more practical note, depending on when, exactly, the story of John Henry takes place, it’s possible he has encountered any number of DC’s nineteenth-century heroes. These could include:

It also wouldn’t surprise me if Paran Katar were there, too—just to make Hawkman’s history even more confusing.

If I were in a slightly more perverse mood, I might try to pull the above characters into a contrived precursor to the JLA, but I’m just not feeling up to it.

Oh—unless you’re planning on trying to eliminate all traces of drama and excitement from this story, John Henry should not—repeat, should NOT—be a metahuman of any sort.

Bonuses and Limitations:
Super Breath is a Skilled Power.

Equipment:
Sledgehammers (x2) [BODY: 10, EV 09, Super Breath: 02. These are, legend has it, fourteen-pound hammers, which Henry can use to drill into solid rock].

As an infant, Henry “only” had the following Attributes:

He may also not have had his Advantages at that point, and his Rage was Serious. He did, however, have his Powers and Skills.

I picked a number for Precog that would stretch across his life, even though “documented” uses are limited to his birth. Telepathy is given based on his “death scene,” where his mother refuses to get out of bed and denies her son’s death, before she is ever notified of it.

Also, Detect is never described as-such, but having “the blue gums of a conjure man” hints heavily at an affinity with the spirit world, as do Henry’s other abilities. My opinion is that he had these abilities, but refused to use them, feeling that they give him an unfair advantage over his fellow men.

I’ll admit, though, that I gave him Attractive, just because I can’t imagine such a character not having a remarkable appearance.

Source of Character: American Folklore, specifically, The Ballad of John Henry, of which many versions exist. 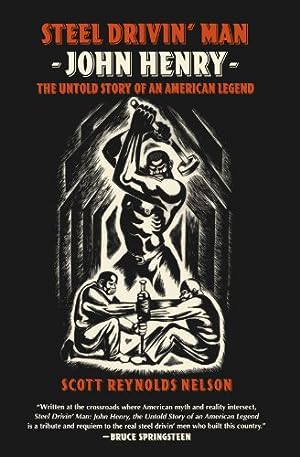