John’s Gun Enhancements are a series of cybernetic implants. Such implants provide the Seven Guns with:

These enhancements are activated by him saying his unrevealed keyword.

John’s Gun is a collection of around 50 artificial eyes. These float around him, moving at his command. They can:

Should any be destroyed, they explode, causing significant damage to the area.

John has also integrated some of the enhancements of his fellow Guns. Therefore he has some of Tom Noir’s physical augmentations, and Angel One’s flight (although he seems to use metal in the eyes to enable himself to fly over rural areas.)

Responsible for much of the technology which gives him his powers, John is a genius with cybernetic designs. However, building the technology was left to Frank Blacksmith.

John was a resident of a western US city ruled by a corrupt police force and private armies. Aided by Tom Watson (Tom Noir), he developed cybernetic technology. Merged with other scientific disciplines, this allowed for the creation of Gun Enhancements. These granted the recipient cybernetic super-powers.

They gathered five others who shared their agenda, plus engineer Frank Blacksmith who built their equipment. They enhanced themselves, adopted codenames and called themselves the Seven Guns.

Laura Torch was killed in an explosion, which also maimed Tom Noir. The Guns began to drift apart following this. But apart from Tom, who retired, all kept operating, although John Horus was the most public, and most independent. John became the most publicly trusted of the guns, and had regular access to the President. 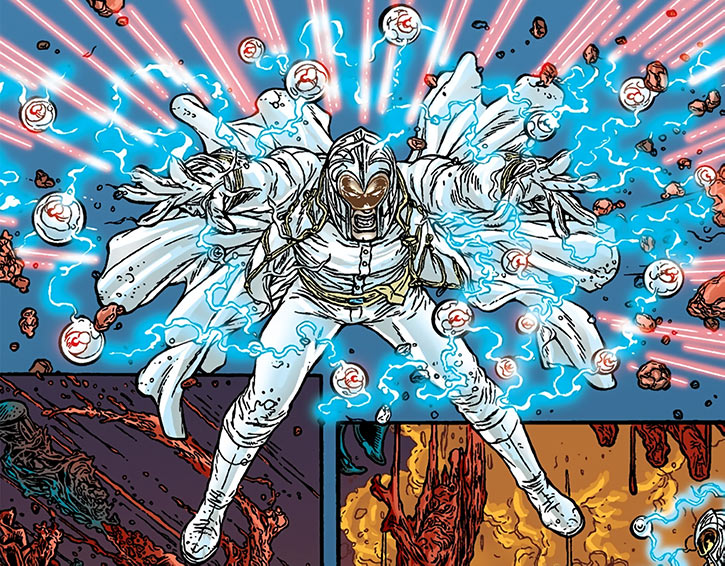 They enjoyed a freedom to operate for a while. But John then decided that the President was guilty of a number of crimes, including starting an illegal war. He summarily executed the President and his inner circle. Horus then stood before the White House press corps declaring that the country should hold fresh elections.

Tom reunited with the other Guns, apart from John, who’d distanced himself from them during his speech. But they were unable to come to an agreement on how to respond. The situation was made harder since Kathryn Artemis had opened fire on the Army.

Tom’s apparent murder while trying to surrender, on top of the continued attacks on him, enraged John. He took the fight to the Army. He was almost overcome by Blacksmith’s Guns, and only saved when the surviving Guns appeared. Their intervention gave him a breather but they warning him and the military to stay out of their city after they were finished.

Finishing Blacksmith’s Guns, John hunted down Frank Blacksmith, finding him at Laura Torch’s unearthed grave. They were both confronted by Tom Noir, who had faked his death to give him the chance to prepare. Tom recovered Laura’s gun, which he then used to kill the three of them in a massive explosion. 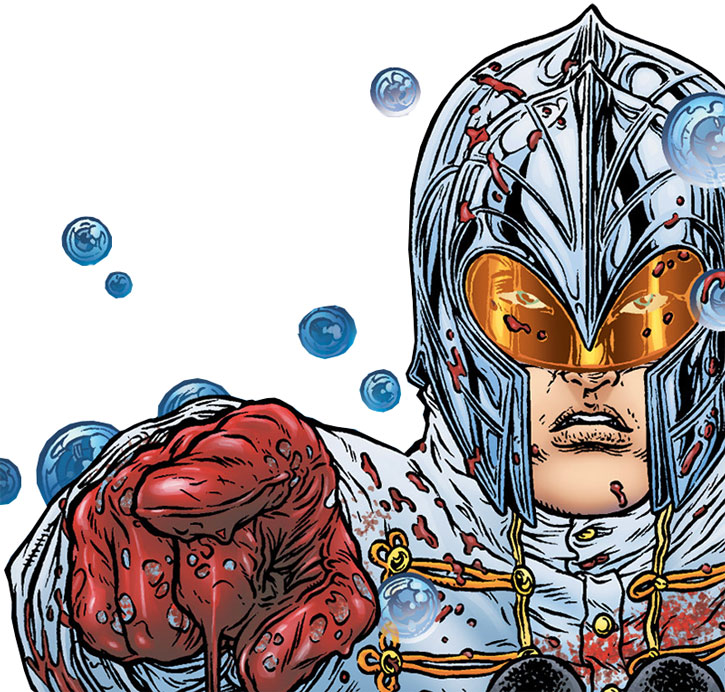 Serious and driven, John is devoted to making America a good place. One where justice exists, and he’ll do whatever he feels is right, no matter the cost.

While his costumed person is calm and unflappable, Tom has claimed that John is high strung, and tends to overthink things and over-react to situation. He seemed to lose his temper a bit when the remaining authorities didn’t do as he’d told them, his frustrations taking hold.

(In front of the White House press corps) “Good morning. I’m John Horus. Ten minutes ago, I executed the President of the United States. And the Vice President. And several of their advisors. I have also had to kill or injure some Secret Service agents, which I regret. I have no further targets. I have secured this room, and you are quite safe with me. I ask you only to listen to what I have to say. We’re supposed to fight evil. You let us fight injustice. You don’t have to pay for us. We do this because we are driven to do it, and because we developed the skills to do it. Your politicians don’t touch us because we’re dynamite: we have saved lives, and have caused not one collateral death in the last three years. But we’re supposed to stand by while this administration commits crimes. We are living in a condition of evil. I cannot be true to myself if I let it go. I cannot be true to the people who believe I stand for rescue from evil.” 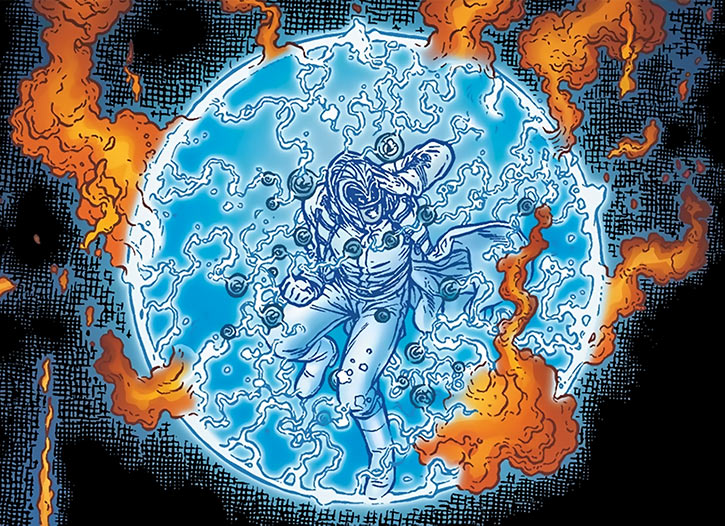 Prior to killing the President, John’s motivation was Upholding the Good, and he had Special Credentials.

It’s been claimed that his Eyes can ’build cities out of mud‘. This hasn’t been shown or explained, but it’s possible the Eyes have additional powers.

The Gadgetry isn’t that high, since it was Blackmsith who actually built Horus’ designs. 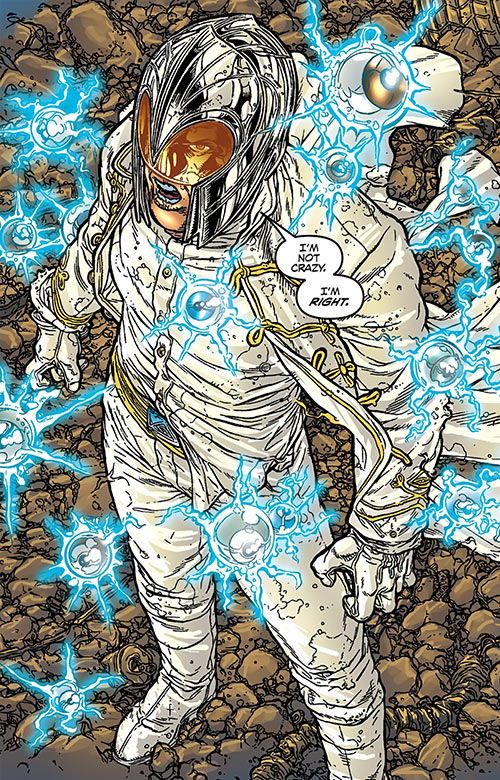 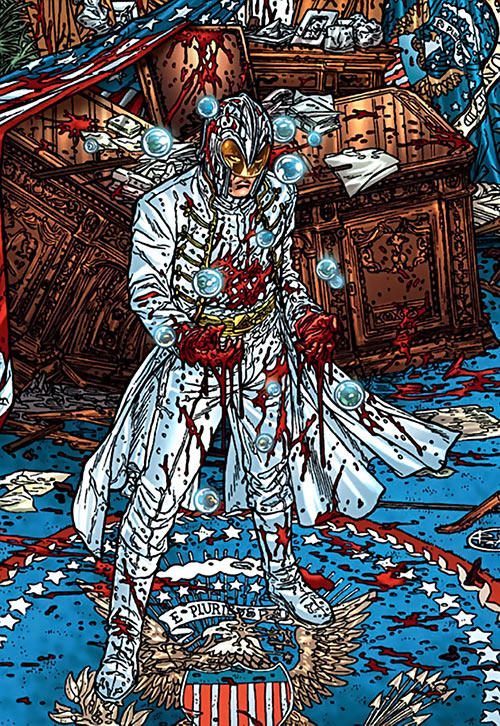 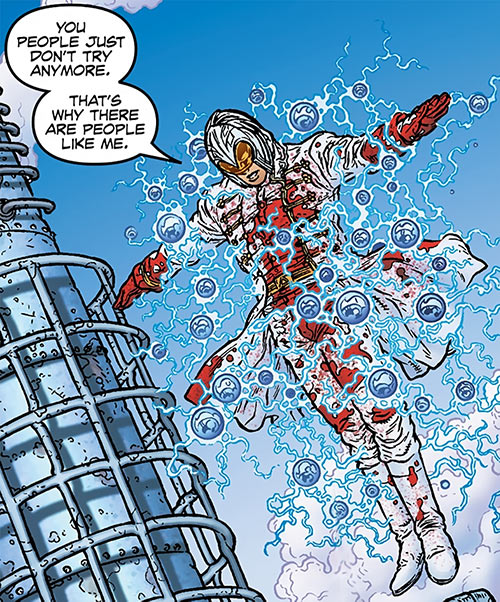 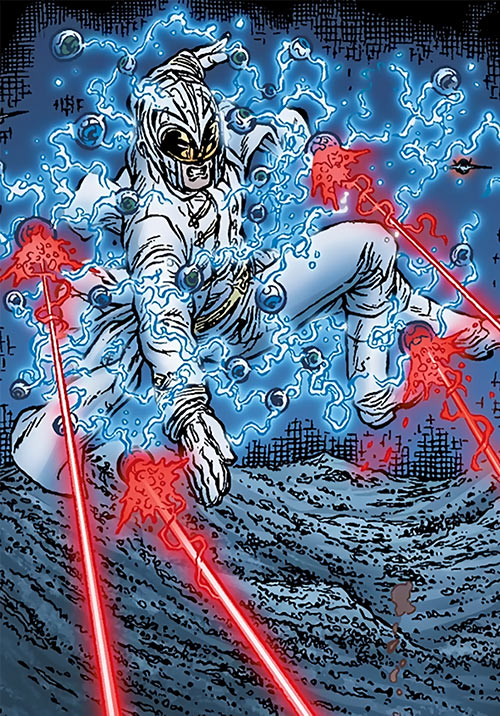 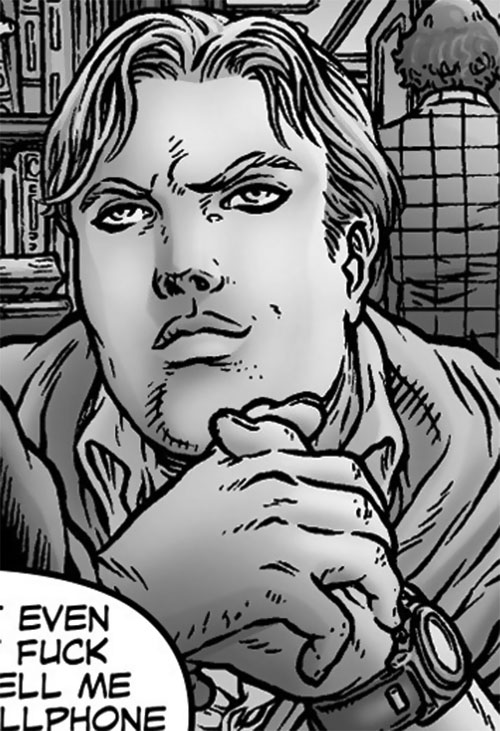