All in all, he’s a large asset in the field in any group or by himself.

Sheppard has a rare DNA tag marking him as a descendant of the Ancients. Though all humans are descendants of the Ancients, very few people have this trait. This allows him to activate and use Ancient equipment, weaponry and ships, such as those provided by the Atlantis base and elsewhere in the Pegasus galaxy.

The gene is constantly active. It produces low amounts of a protein that is found everywhere in his body as well as on his skin. Thus, merely moving his hand close to a machine is enough to active the device for a long duration. Once activated, a machine can be operated by others who do not possess the gene. In the past, such gene-holders have been kidnapped to provide activation.

However, by the use of gene therapy several members of the Atlantis Expedition have also been artificially given the gene. As a result, they can access Ancient technology as long as they receive regular treatments of the therapy. This therapy is kept secret although a few rogue scientists in the Pegasus galaxy also know of it. Of course, Sheppard needs no therapy.

John Sheppard is an experienced and an extremely talented pilot in the US Air Force . However, his reputation was somewhat tarnished when he disobeyed a direct order in Afghanistan in an unsuccessful attempt to save the lives of several servicemen. He has experience flying AH-1 Cobra , AH-64 Apache , OH-58 Kiowa , UH-60 Blackhawk  helicopters and CV-22 Osprey  tiltrotor aircraft.

He requested a posting at McMurdo Station. There, he was called upon to transport General Jack O’Neill to the research base that had been established at the nearby Ancient defense facility. This is when Sheppard inadvertently discovered that he not only had the ATA gene (the genetic factor necessary to activate Ancient technology), but that he was naturally proficient at using it.

After some doubts, he finally joined the expedition to Atlantis, although Col. Marshall Sumner made it clear he was not pleased about Sheppard’s involvement in the mission.

The key to Atlantis

The team discovered that the shield protecting the underwater city of Atlantis was about to collapse. As a result, Sheppard joined the mission team searching for a new power source on Athos on Dr. Weir’s orders. He made a better impression on the Athosian leader, Teyla.

Sheppard then killed the Wraith Keeper, thus awakening all the other hungry Wraith that were sleeping. After some fancy flying with the Puddle Jumper , he, the Earth personnel and the rescued Athosians returned safely to Atlantis.

Aside from being the ranking military officer, Sheppard led an exploration team that consisted of Dr. Rodney McKay, Ronon Dex, Teyla and formerly, Lt. Aiden Ford. Sheppard’s relaxed command style often put him at odds with his more by the book chief of security, Sgt. Bates, until a beating by a Wraith forced Bates to return to Earth.

During the Wraith attack on Atlantis, Sheppard lost command of the military after the arrival of Colonel Dillon Everett from Earth.

After securing Atlantis, the Daedalus  took Sheppard, Weir, McKay and Beckett back to Earth to report on the status of the Atlantis Project. General Hank Landry implied to Weir that the Pentagon wanted to make Col. Steven Caldwell the Atlantis expedition military commander, but Weir informed them that Atlantis already had a military commander, John Sheppard.

When they stated that Sheppard was just a Major with a questionable record, she told them they could solve that problem. With the President and the International Oversight Committee on her side, Sheppard was promoted to the rank of Lieutenant Colonel, and instated as official military commander of the Atlantis expedition. This annoyed Col. Caldwell, who had sought the leadership position.

While testing a new “Gate bridge” that McKay and Lt. Colonel Samantha Carter came up with to accelerate transportation between Pegasus and the Milky Way, an Ancient ship was located. It was filled with living Ancients who reclaimed Atlantis. With the expedition disbanded, Sheppard was assigned command of an SG team.

When General O’Neill sent a message to Stargate Command telling them that the Asurans had taken control of Atlantis, Sheppard, Weir, McKay and Beckett hijacked a puddle jumper. They traveled back to the Pegasus galaxy via the Gate Bridge. Tracking down Teyla and Ronon, the newly reunited team succeeded in rescuing O’Neill, Richard Woolsey, and Atlantis.

Sheppard was then forced to take command of Atlantis. Weir had just fallen into a coma due to injuries she sustained after Atlantis was grazed by the Replicator’s beam. The Asurans were reprogrammed to pursue the Wraith and the city of Atlantis had to leave for space. Soon thereafter, Colonel Samantha Carter joined as a regular and acted as the expedition leader.

Richard Woolsey then replaced Carter as the leader of the expedition. Teyla, who was held captive by Michael, gave birth to Torren John and escaped with her team, before they were able to cripple Michael.

Eventually, he invaded Atlantis with a commandeered Puddle Jumper to take Torren and destroy Atlantis, which had landed on a new planet. But, thanks to the efforts of Sheppard and McKay, Michael was finally killed. Due to the intervention of rogue Asgardians the Wraith were further weakened and this gave the humans freedom enough to establish a coalition.

An upgraded Wraith ship, a last ditch effort, then headed for Earth. But through “Todd” and the efforts of the expedition and Atlantis, the ship was finally destroyed over Earth. The city of Atlantis landed in the Pacific Ocean near San Francisco. Sheppard likely continued to serve with Stargate Command.

Sheppard is a handsome man usually seen clad in a military uniform. He does not give the impression of being a hard man even if he always keeps up a somewhat cold and relaxed façade.

John is one of the more laid-back, easy-going personalities on the Atlantis Expedition. He is capable under pressure, an excellent marksman, and outstanding pilot. He is very instinctual and frequently is able to come up with ingenious solutions to complicated problems.

Some put this ability down to his being a closet mathematical genius, despite little to no scientific training. But despite this, he tends to be relatively humble. He is able to accept that sometimes there isn’t anything he can do to help with the current problem, and he has to leave it up to more capable minds.

Despite being a Lieutenant Colonel, he has an easy rapport with most of the people in Atlantis. This includes the military personnel that are below him in terms of rank. He is good friends with both Teyla and Ronon, and grudgingly admits that he loves McKay “in the way a friend feels about another friend”.

And despite occasional clashes with Elizabeth Weir early on (due to their differing viewpoints), they have developed a strong and respectful friendship. This is in no small part due to their parallel leadership roles on the Expedition. The thing he is most afraid of is himself, as well as failing to protect his friends.

Though he is a somewhat incurable flirt, he has not yet been shown in an actual relationship. He has has been refered to as the Expedition’s Kirk by Rodney. And indeed alien women easily fall for his looks and charm.

Sheppard himself is a doer and rather bad at expressing his emotions. The impression is that of a mysterious and calm stranger that knows what he’s doing, even if he often just makes things up as the team moves on. He is in possession of a rather wry sense of humour. Sheppard frequently alleviates tension by telling jokes to keep spirits up – much to the annoyance of McKay.

In fact, he is a wiseguy towards enemies and very much enjoys pressuring McKay into action. It sometimes looks like he has a death wish or is running away from something. Whatever the case, he seems very fond of blowing things up with some C-4.

Sheppard enjoys sports and reads because he thinks that is what he should do. He hates clowns, enjoys Ferris wheels, American football and ’anything that goes faster than 200 miles an hour‘. He’s also displayed a vague aptitude for Chess – beating McKay on at least one occasion, once again to McKay’s chagrin (Sheppard actually turned down a membership offer from Mensa).

He is an avid golf player and a fan of Johnny Cash . He enjoys watching movies, often with Ronon, and has on several occasions referred to the movie Alien by Ridley Scott.

(By himself in a prison cell) “Kolya ! I didn’t kill you last time, remember ? You promised me points for that. Kolya ! Dammit. I should have killed him.”

(To Niam) “You’re the one we like, so don’t take this personally.” (Ronon knocks Niam out)

When flying the ships of the Ancients he may aim and fire its weapons using his Space vehicles subskill. 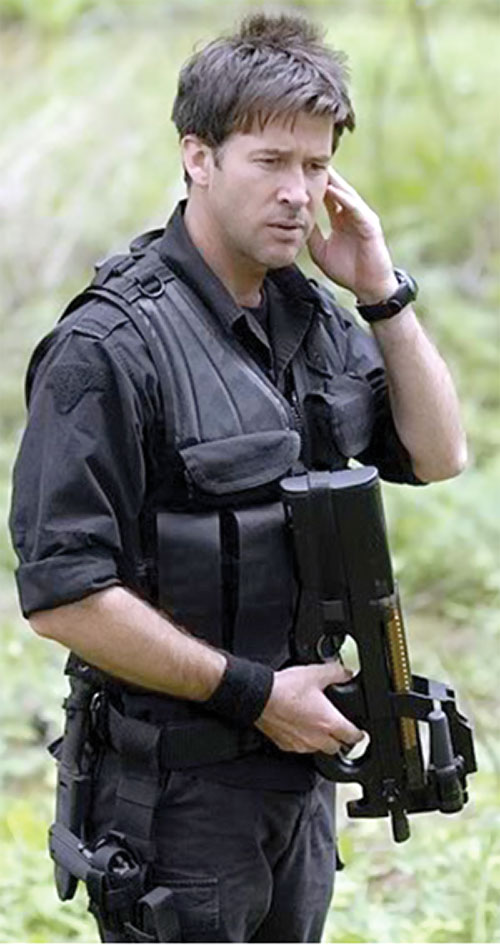 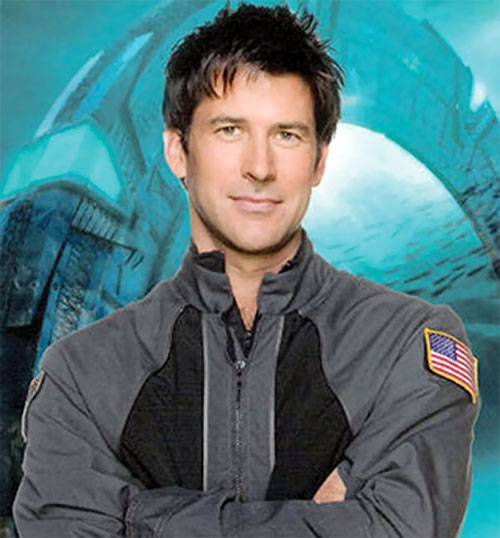 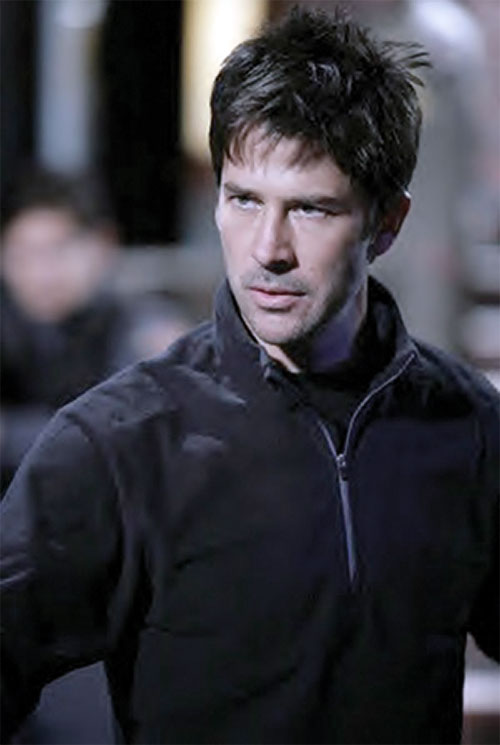