No powers, but his sound system can hypnotize people. So I’m assuming some degree of tinkering ability.

Johnny is a commanding, star-like presence, at ease barking orders at his stagehands and underlings.

He appeared in Daredevil vs. Johnny Punk”, which was in Dazzler #1, among other places.

Johnny is standing backstage at one of his concerts with two technicians. Pointing to the crowd, he says, “The next set, we raise the decibels to mega-pitch ! The high-frequency sound waves will lock their brains—they’ll do whatever I command !”.

With his hypersensitive hearing, Daredevil picks up on Johnny’s plan from outside. DD enters the arena, finding Johnny with his hand on the sound system controls. “Back off, or I’ll blow the roof off—with sound !”, says Johnny.

Daredevil’s radar senses enough electric potential to back up Johnny’s threat, so he offers up some Hostess™ Fruit Pies as a distraction. Johnny exclaims,”I sure dig the real fruit filling !”.

Daredevil wraps the criminal musician and his two flunkies up with the line from his billy-club. In a very un-Millerish  fashion, he utters, “Better a Hostess Fruit Pie than the fruits of crime, Johnny Punk !”. Swinging over the cheering crowd, Daredevil, the fuddy-duddy says, “And thanks to Hostess, I don’t have to listen to his music anymore !”.

Johnny is decked out in a black leather jacket, (with red trim around the lapels !), leather pants, boots, etc.. Under the jacket, a white dress-type shirt and a red tie. He has a green mohawk, and wears small, gold hoop earrings in each ear. Johnny Rotten would kick this guy’s ass.

Johnny is more than a mere punk rock musician. He’s also a criminal mastermind with aspirations of taking over the minds of his fans. Presumably, he would use them to commit other criminal actions — or maybe, just buy more of his records. 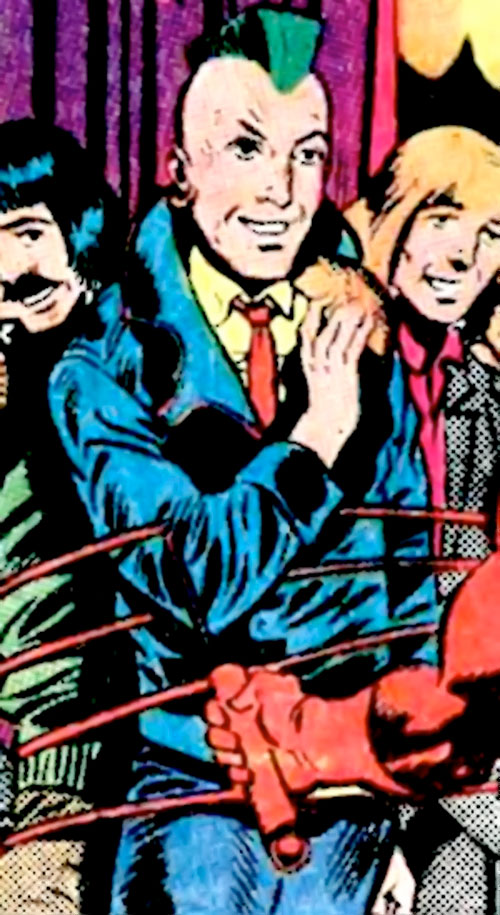