By injecting his designer drug, Johnny Quick gains superspeed. His experience with moving at accelerated speed allows him to apply to it to other abilities, notably creating wind currents and moving through solid objects by altering the vibration of his molecules.

In the “Syndicate Rules” storyline, Owlman at one point negates Johnny Quick’s superspeed, claiming to have shut down the “speed-juice delivery system” in Quick’s costume. However, Johnny Quick is shown powering up both in Earth 2 and “Syndicate Rules” by injecting speed-juice via a hypodermic syringe. In the latter case, he is even told to do so in order to regain his superspeed by Owlman.

The explanation for the discrepancy is unrevealed. One possibility is that activating Johnny Quick’s superspeed requires a large amount of the chemical to be administered in a single shot, while maintaining it only requires smaller continuous doses.

In other words, he shoots up to reach maximum speed, then uses a steady release mechanism in the costume to maintain that speed. This device may operate much like a medicinal patch.

Whatever the mechanism, it is unobtrusive and easy to transfer from one suit to another. Johnny Quick retained his speed while wearing a copy of the Flash’s skintight uniform without any modifications or distortions being visible on said outfit.

The effect of this is that all people of the anti-matter Earth have, in DC Heroes terms, the equivalent of a Catastrophic Irrational Attraction to repaying debts when the marker is called. On those few occasions when people violate this rule, whatever passes for the local authorities will quickly bring the offender in for trial.

The Crime Syndicate of Amerika is the JLA of an Earth in an antimatter universe where good is evil and evil is good. Benedict Arnold was the first U.S. President, Washington was a traitor, Britain fought for its independence against an Amerikan colonial power, etc. It is a reversed DCU.

By large, things are pretty upbeat in the DCU. People are generally happy, secure and open to the wild and the novel by virtue of living in a world where good always triumphs in the end, thanks to colorful superheroes.

By contrast the dreary inhabitants of the antimatter world live on a planet dominated by lies, greed and hypocrisy. If that world sounds all-too familiar, then you’re just too cynical by half… There vice and corruption are a way of life and the bad guys always win.

Here crime is the founding principal of society. Evil is rewarded, cruelty is lauded and people live everywhere in fear of their masters. This goes all the way through the local mobs and the corrupt police, the bent journalists and up, through City Hall and the governments, to the top of the pyramid – the seedy Crime Syndicate of Amerika and its vicious bullying leader, Ultraman.

The CSA rules their Earth with an iron fist from their lunar headquarters, the Panopticon (“The place of wide vision” or “watchtower”). Their motto is “Cui Bono”: Who Benefits. (Interview with Grant Morrison)

Johnny Quick’s personal history is largely unrevealed. He received his powers by killing another speedster and filtering the critical elements for his superspeed drug from the decedent’s blood (Interview with Grant Morrison). Quick could not get the enhancements to take permanent effect, so he must regularly inject the speed-juice to maintain his powers.

Johnny Quick and Power Ring act as liaisons between the CSA proper and the lower elements of the Crime Syndicate — organized crime heads, presidents, etc. It’s not a particularly enjoyable duty, but as the junior members of the CSA, Power Ring and Quick don’t have much choice (JLA: Earth 2).

The CSA’s dominion was temporarily disrupted when the last free superhero, Alexander Luthor, traveled to the matter Earth and convinced the Justice League to intervene on the anti-matter Earth. The CSA launched a retaliatory strike on the matter Earth as a prelude to conquest, only for both teams to realize they could not prevail in the universes opposite their own.

The two groups then discovered that the universal crossover was part of a plot by Ultraman’s servant Brainiac. He had secretly engineered the confrontation to regain his freedom and expand the power of his consciousness.

The latter goal required Brainiac to take actions that would have destroyed both Earths. Working with the JLA, the CSA was able to return to their Earth, after which they took their revenge against their rebellious servant by lobotomizing him.

Seeking to discover what had happened and to prevent it from occurring again, the CSA returned to the matter Earth. Their initial mission was satisfied when they found out that Krona was responsible but had been neutralized by the JLA. However, the CSA had also discovered that the imbalance between the universes had been eliminated by the restructuring and they began a reign of terror on the matter Earth.

The Qwardians eventually quit the field of battle against the two supergroups. The CSA sent the JLA back to the matter Earth, bitterly aware that they owed the heroes a favor.

With that resolved, the CSA began the arduous work of restoring order on the anti-matter Earth: their public humiliations during their battles with the JLA and the Qwardians had caused:

Furthermore, another Qwardian fleet was headed toward their planet. (JLA: Syndicate Rules)

Johnny Quick looks like what he is: a strung-out addict in need of a fix. When he’s under the influence, he regains the appearance of health and vitality.

His costume is a red body suit with yellow boots, two yellow lightning bolts coming over the shoulder and down the torso to waist level in the same position that suspenders would be in, and a chrome crash helmet.

When he’s just taken another hit of his speed-juice, he gets so jittery that he leaves a series of afterimages around him.

When he’s not under the influence of his superspeed drug, Johnny Quick has the bearing of a heavily sedated man, slurring his words. When he’s jacked up, he’s like an anxious little boy constantly underfoot asking questions and making wise cracks.

“Wwellthethingisthis : The more you think about it, the more obvious it gets. A matter universe means matter versions of us. Could be the best fight we ever had, man.”

Johnny: “Tellingyouwe’retrapped. If this is your fault, Ultraman’s gonna kick your ass past Jupiter !”
Power Ring: “What ? Come on ! I’ve been taking a leak here !”
Johnny: “That was forever ago !”

“Hey, hey, Power Ring, little Syndicate advice. You do what the big boys say, you get fewer internal injuries.”

“Leaves the fish man. Got one of you back home, too. Only ours is, y‘know, actually scary.”

By Roy Cowan and John Colagioia. 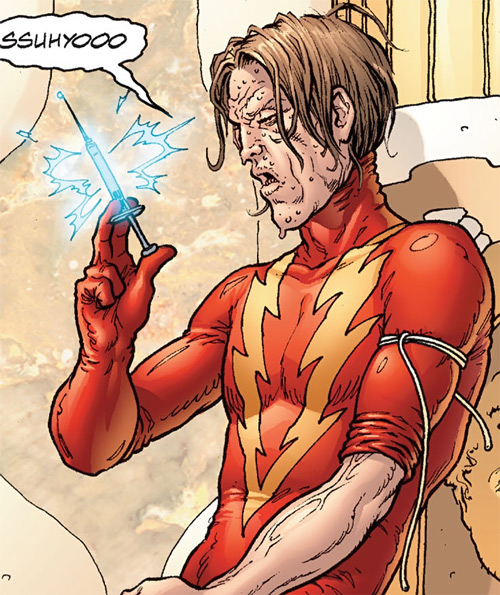