As DC begun creating a shared universe, Johnny Thunder was caught in the tide and ended up as a member of the JSA. He never entirely stuck in this role, but remains a part of the team’s heritage. As such he had his own legacy with more modern characters and story elements.

The following are older technical notes, not a full profile.

Johnny Thunder is just an unbelievably lucky and naïve lad. He’d be little threat if it weren’t for his unique rapport with the extremely powerful genie known as the Thunderbolt.

Johnny Thunder was born in July 7th, 1917 to Simon B. Thunder, a bank clerk, and his wife Mildred. When Johnny was one year old, he was kidnapped by a group of men from the small island nation of Badhnesia. They dyed his hair and covered a strawberry birthmark on his arm to disguise his identity, and spirited him away to their island.

Once there, Johnny was adorned in emeralds and holy garments. Treated like a messiah, he was chanted over and prayed to by the priests of Badhnesia.

He was educated in Badhnesian mysticism, the crux of which was that he would grow into a child possessed of astonishing powers. The priests of Badhnesia planned to use the young Thunder’s predestined powers to rule the world when he reached the age of seven. (Badhnesian mythology claimed that power peaked in seven-year increments.)

However, Badhnesia was defeated by the neighbouring of Agole before Johnny reached seven.

The priests sent Johnny into seclusion. The plan was to hide him until he was seven, at which point they planned revenge on their conquerors. Unfortunately, the accident-prone Johnny stumbled into a boat and was whisked away into the shipping lanes of major boat trade of Indonesia.

There he was picked up by an American freighter and returned to the United States for a reunion with his family.

Johnny lived an ordinary life until 1940, the year of his 23rd birthday. Not possessed of wealth or education, Johnny had obtained a job as a window washer for a local business. When Johnny found himself short a sponge, he called out to a fellow washer with the phrase “Say, you !”.

Unbeknownst to the hapless Thunder, “Say, you !” was phonetically identical to the mystic Badhnesian phrase “Cei-U,” and an invisible servant appeared to obey Thunder’s every command.

When his coworker lost his balance and fell, Johnny wished he could catch him, and in an instant, he had done just that. Johnny had the power to command his servant for one hour before the Thunderbolt vanished.

The origin of the Thunderbolts is shrouded in Badhnesian mysticism. Current theory suggests that Badhnesia forms some sort of gateway to the another plane of existence known as the 5th Dimension. Residents of the 5th Dimension have included several beings known to traffic with humans, notably Mxyzptlk and Qwsp.

The Thunderbolt linked to Johnny Thunder is named Yz and has been shown to have relatives of similar configuration, including a “son” named Shocko. What this means in terms of human familial relation is unclear.

Badhnesian priests managed to control a denizen of that realm with a spell that attached to a human being at least once. Whether Johnny Thunder is the first to be bonded to a Thunderbolt or not is unrevealed.

Eventually, Johnny realized that he was controlling the odd occurrences in his life. He also came to understand that the phrase “Say You” was the factor determining the Thunderbolt’s appearance. Johnny’s career was somewhat hapless, but the ability to manipulate such powerful forces earned him a fair measure of attention.

Johnny tagged along to the first meeting of the Justice Society of America in 1940. He became a member when the Flash took a leave of absence in 1941.

He was also a member of the All-Star Squadron during World War II. As he became a helpful ally to the JSA, Johnny rarely utilized the full potential of his powers. He solved cases as much by accident as by design. He remained steadfast, however, participating in most JSA cases throughout his wartime career.

In his private life, Johnny lacked consistent employment. Most of his jobs were menial, ranging from window washer to firefighter’s assistant to paper-hanger. Johnny had a long-time dalliance with girlfriend Daisy Darling. Not a genius either, Daisy was an occasional source of casework for Johnny.

Eventually, Johnny’s bond with Daisy waned and she became a less significant factor in his life. By the end of the war, she had disappeared entirely. In 1941, Johnny adopted a young girl whom he named Peachy Pet. Peachy Pet was a hyperactive child, rambunctious and troublesome. Constantly chasing her was another source of adventure for the hapless would-be super-hero. 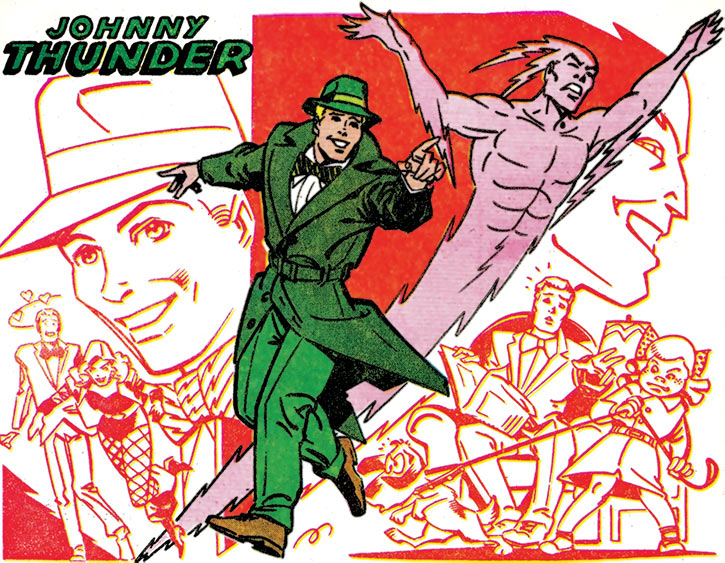 In 1942, Johnny joined the US Navy based after seeing a Navy recruiting poster on which Uncle Sam declared, “We Want You, Johnny !” Not realizing that “Johnny” was a generic reference, Thunder ended up serving aboard a Navy submarine chaser and good-will vessel, the USS Bewilderment, under Captain J.G. Shelly.

Not to be left out, Peachy Pet stowed away about the vessel, much to the ire of the crew. Peachy Pet earned her keep, however, when she spotted a submarine bearing down on the vessel and saved the ship. She was allowed to remain with Johnny as ship’s mascot.

When the ship once again docked in a US port, Johnny was granted an extended leave to keep him from causing trouble, though he returned to the ship from time to time. While most of Johnny’s adventures with the Navy were the result of his own ineptitude and a lot of tolerance for the JSA member, he did manage to free Badhnesia from Japanese control in 1943.

Johnny was finally discharged from the Navy in 1944.

With the war nearing an end, Peachy Pet seized on the idea that she and Johnny should exploit their fame and abilities by taking their team to Hollywood. Once there, they found Hollywood to be a den of thieves and swindlers. Despite their efforts to get themselves recognized, the pair ended up returning him to Johnny’s parents.

In 1945, Johnny turned 28 years old, an age divisible by 7. The Badhnesian priests waited until 1946 (a weaker year) and used spells and enchantments to weaken Johnny’s control of the Thunderbolt. With his powers waning, Johnny resigned from the the JSA before its dissolution. Johnny was replaced by a new heroine with whom he had recently teamed up: Black Canary.

The Badhnesians never give up

In the early 1950s, Johnny’s power over the Thunderbolt had vanished completely. He was soon kidnapped by agents of Badhnesia.

When he arrived on the island nation, he learned the King of Badhnesia was dying. The High Priest of Badhnesia cast a spell over Johnny, binding him to his will, and then restored Johnny’s control of the Thunderbolt. With the death of the King, Johnny was placed on the throne. The High Priest announced plans for world conquest with the power of the Thunderbolt as assistance.

Once he became aware of the High Priest’s plans, he ordered the Thunderbolt to fetch Superman, who broke the spell and defeated the High Priest (post-Crisis, one imagines that it was Green Lantern rather than Superman). Johnny remained in Badhnesia for some time afterwards, teaching the native population about democracy.

When the first President of Badhnesia was democratically elected, Johnny returned to the United States.

When Vandal Savage kidnapped several of his old enemies from the Justice Society, Johnny was among them. When the JSA resumed its activities after Savage’s defeat, Johnny returned to active membership. He participated in several cases during the 1960s and 1970s, but his activity waned during the 1980s.

Nonetheless, during the Crisis on Infinite Earths, Johnny joined his JSA teammates in their efforts to protect the multiverse. When the JSA was summoned by the Spectre to enter Limbo and forestall Ragnarok, Johnny and his Thunderbolt were among them.

During the JSA’s time in Limbo, the magic of the island nation of Badhnesia began to disappear. Most of the residents left the island, seeking employment and brighter futures abroad. Pol St. Germain, a sociopolitical theorist, acquired the island, which was by this point uninhabited.

After the magic’s gone

At the request of Kiku, a native Badhnesian, and Johnny, the JSA journeyed to Badhnesia to investigate the activities of St. Germain, who had supposedly created an island utopia from the original Badhnesia. Germain was found to be generating an image of a utopia by imprisoning the weak, sick, and elderly out of the sight of the more affluent natives of the island.

The JSA overthrew St. Germain, the island of Badhnesia was destroyed. Kiku, the last of the Badhnesians, was adopted by Johnny and developed an affectionate relationship with the Thunderbolt.

Later on, Johnny’s memory began to fail, to the point that he has forgotten how to summon the Thunderbolt.

During Zero Hour, Johnny joined the rest of his JSA comrades in the first assault on Extant. Like them, he was aged to a frail condition closer to his chronological age.

With age, Johnny’s memory losses have progressed to full-scale Alzheimer’s. His never-very-sharp mind has decayed into reminiscences and faulty memories. It is likely that the world has heard the last of a hero who always meant a little too well and tried a little too hard.

It has been recently revealed that William Twotrees may be Johnny Thunder’s illegitimate son by an affair in the 1960s, and that control of the Thunderbolt may have been passed on to Kiku. Most recently, Yz was revealed to be trapped in an ink pen belonging to Johnny, an ink pen which has been inadvertently given away to a young child. Whether Kiku ever possessed control of the Thunderbolt is unclear.

That child, the erstwhile Jakeem “J. J.” Thunder, temporarily controlled the power of not only Yz, but his 5th dimensional counterpart Lkz who had merged with Yz. Who actually controls the Thunderbolt and what the nature of that relationship is now difficult to determine.

Johnny Thunder has, and may always be, a child at heart. Despite the adventures he has participated in, the people he has called friends, and the metaphysical source of his abilities, he still has managed to keep his sense of wonder and naïveté about him.

Additionally, Johnny is fiercely loyal, and little will stop him from attempting to help a friend in need, even if it puts him in personal danger.

“Kids ? A guy would know about something like that… wouldn’t he ?”

Advantages:
Pet (Thunderbolt (Condition : Johnny must say “Cei U” to summon the Thunderbolt. During roughly half the war, he didn’t know that : assumes it takes 8 RAPs of Dumb Luck to accidentally pronounce the magic words).

By Ray Winninger for Mayfair, edited by Sébastien Andrivet ; history by David Stepp . 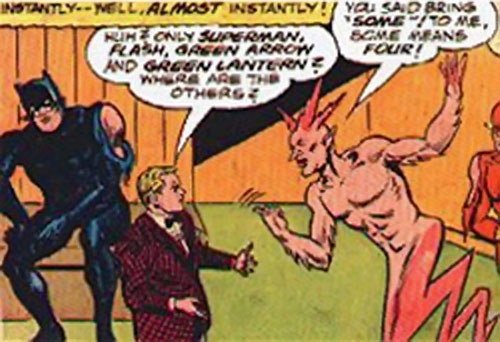