Initially Jolt had enhanced speed, strength and reflexes. She could also channel bioelectrical energy with her touch. When moving at speed she can build up energy to deliver a hyperkinetic punch (in DC Heroes RPG terms, Superspeed subbing for EV).

Following her revival her body was too handicapped to support her speed, strength and reflexes. On the other hand she could transform herself into a being of pure bioelectrical energy which was uninhibited by her disability. If this energy form is neutralized, she reverts to her partially paralyzed alter ego. In this energy form she can also fly.

Hallie’s parents moved to New York from Japan when she was young. Her father worked at the United Nations and her mother studyied at E.S.U.. In New York, Hallie became enamoured with superheroes.

On her 15th birthday, Onslaught and his Sentinels attacked New York. Hallie saw her parents and all her friends killed before her eyes.

Dealing with the shock, she came across a number of younger children in the ruins, and became their protector. She and they were captured by hi-tech looters, who sold them to Arnim Zola for genetic experimentation. Given powers by the experiments, Hallie escaped and went in search of help to rescue the others.

Learning that the Avengers and Fantastic Four were lost, she approached the Thunderbolts for help. They stormed Zola’s base, but were too late to rescue his other captives, who had been transformed into a mutated monstrosity. Taking the name Jolt, Hallie joined the Thunderbolts. 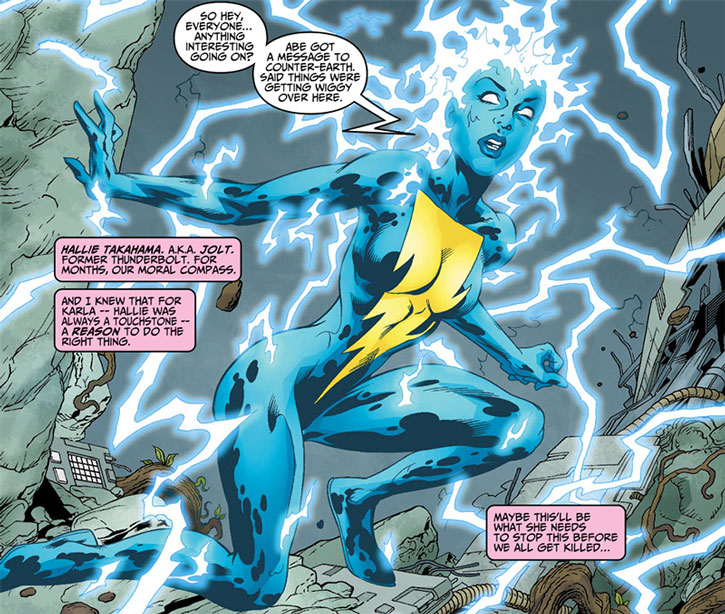 She enjoyed her time with the Thunderbolts, using it as a distraction from the death of her friends and family. She began to form relationships with the others, especially Meteorite. She was devastated when they were unmasked as the Masters of Evil, but managed to elude arrest, and snuck on board their shuttle as they headed for Zemo’s satellite base.

Observing them from hiding, she realised that some of them were having second thoughts about going along with Zemo’s plan. Thus, she revealed herself to them.

Moonstone, Songbird and Mach-1 decided to turn on Zemo. But he had anticipated this, and already had the returned Fantastic Four and Avengers (apart from Iron Man) under his control. Escaping from them, the Thunderbolts formed an uneasy alliance with Iron Man.

A jolt of ethics

The TBs eventually managed to free the heroes from his control, and stop Zemo’s plan. Atlas also joined them when Hallie’s life was in danger. Before they could turn themselves in to the Avengers, however, they were teleported away by an outside force.

Despite her feelings of betrayal, she stayed with her team mates. Hallie also worked to convince them to work to redeem themselves. While evading the authorities they came into conflict with Graviton.

They then the new Masters of Evil, whose leader, the Crimson Cowl, offered them membership. They ultimately refused, and worked towards battling the Masters plans, trying to prove themselves.

They were soon approached by Hawkeye, who offered to lead them in trying to prove their good intentions. The Thunderbolts accepted him. He led them in bringing down the Masters of Evil, and they took over the Masters secret headquarters, near Burton’s Canyon, Colorado.

With a fixed base, Hawkeye decided to enrol Hallie and Charcoal, who had recently joined the team, at the local school. Hallie was extremely resistant to this, since the normality of school life forced her to deal with the death of her parents and friends.

Soon after, while spending time with Charlie and some friends from school, Hallie was shot. She was killed by an unknown assailant, Scourge, with a hard air bullet.

Her body was replaced in the morgue by Techno, who was masquerading as the Ogre, an ally of the Thunderbolts. He managed to revive her, but had to keep her in a chamber that would take a while to fully restore her to life. Before the process was complete, Techno was attacked by Scourge, who severely damaged him. Techno was forced to make a choice between escaping and saving Jolt’s life.

He chose to save Jolt, and she was woken from her chamber. Because she had been woken to early, however, she had not fully recovered from the atrophy. Hallie soon discovered that in human form she was paralyzed down her right side.

A new lease on life

Reunited with the Thunderbolts, they discovered that Scourge had been a puppet of Henry Gyrich. Himself controlled by Baron Strucker, Gyrich planned to spread mind-controlling nanites over the world. In the process of foiling his plot, they came into conflict with the Redeemers, a group led by Citizen V (IV, John Watkins), whose members used identities formerly used by the Thunderbolts.

Following the destruction of Gyrich’s plot, the criminal members of the Thunderbolts were given pardons – provided they stayed out of costume. Charcoal and Jolt were inducted into the Redeemers. Their new team was based in the Thunderbolts former base at Mt. Charteris. They were led by, first Captain America, and then Citizen V (IV).

As a member of the Redeemers she first came into contact with the Young Allies. This group came from the Counter-Earth that the Avengers and Fantastic Four had disappeared to. They had travelled to Earth to try and force Dr. Doom to leave Counter-Earth by threatening Latveria.

Soon afterwards, their Mt. Charteris base was destroyed when Graviton arrived seeking revenge on the Thunderbolts for his past defeats. As the only members of the group there, he focussed his initial ire on Jolt and Charcoal. Graviton reduced Charcoal to dust, and ripped Jolts energy form to shreds.

She pulled herself together in time to aid the returned Thunderbolts (Mach-III, Songbird, Fixer, Atlas (Dallas Riordan), Moonstone, and Citizen V (IV, whose mind was secretly that of Helmut Zemo)). But in preventing Graviton’s self-destruction from demolishing the Earth they were transported to Counter-Earth, without Songbird or Citizen V (although Zemo’s mind had been transplanted into Fixer’s Tech-Vest).

While travelling across Counter-Earth, planning to hijack a space shuttle to get back to their Earth, the Thunderbolts realised how desperate the situation was. Thus, they helped out where they could.

Deciding to do what they could to help the people of Conter-Earth, they discovered the city of Attilan. The Thunderbolts turned it into a flying city, on which they gathered refugees from the worst hit parts of the planet.

When disaster threatened the planet, the Thunderbolts teamed up with the Young Allies to try and prevent it. The joint teams succeeded. However all the Thunderbolts, except Jolt, were transported back to Earth.

Jolt joined the Young Allies, continuing the rebuilding process the Thunderbolts had started.

Hallie returned to Earth briefly, when a confrontation broke out between the Thunderbolts and the Avengers. Moonstone, overcome with power, had become a threat to the planet. After the crisis had passed, Jolt returned to Counter-Earth.

Idealistic and enthusiastic, Jolt is fiercely honest and protective of her friends.

Before learning the Thunderbolts true identities, she had started to develop an attachment to Moonstone. But while she eventually forgave most of the others for their betrayal, she never quite trusted Moonstone again, viewing her as manipulative and untrustworthy.

Despite her initial betrayal, and some bitterness at her physical handicap after her revival, Jolt remains enthusiastically devoted to being a superhero.

Bonuses and Limitations:
Acrobatics is Contingent on Superspeed (-1).

Bonuses and Limitations:
Lightning has a range of Touch (-1).

Drawbacks:
MIH (Anyone trying to imprison her), SPR (Partially paralyzed).

Prior to her “death” and revival, Jolts only Powers were her Jumping, Lightning (at 10 APs) and Superspeed. She didn’t possess the Local Hero Advantage, her connection to the Young Allies, or her Alter Ego and Distinct Appearance Drawbacks.

Between the revelation of the Thunderbolts identities and her joining the Redeemers, Jolt had the Mistrust Drawback.

In combat Jolt used to jump around a lot, bouncing and rebounding off objects and enemies. No jump can be further than her APs of Jumping would allow, but the distance she can cover in a phase is equal to her APs of Superspeed.

She would frequently push her powers, particularly her speed (such as when she trailed Cyclone back to the Masters of Evil), but this ran the risk of leaving burning out her power, forcing her to wait until it recovered. 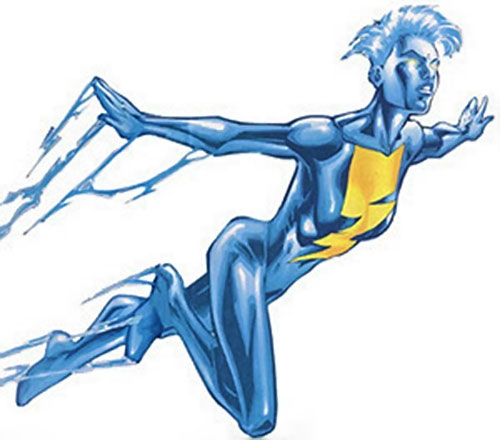 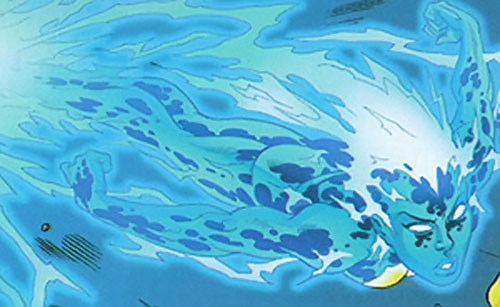 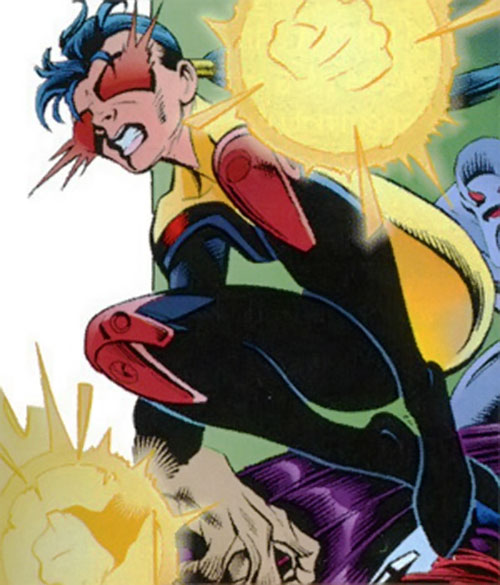 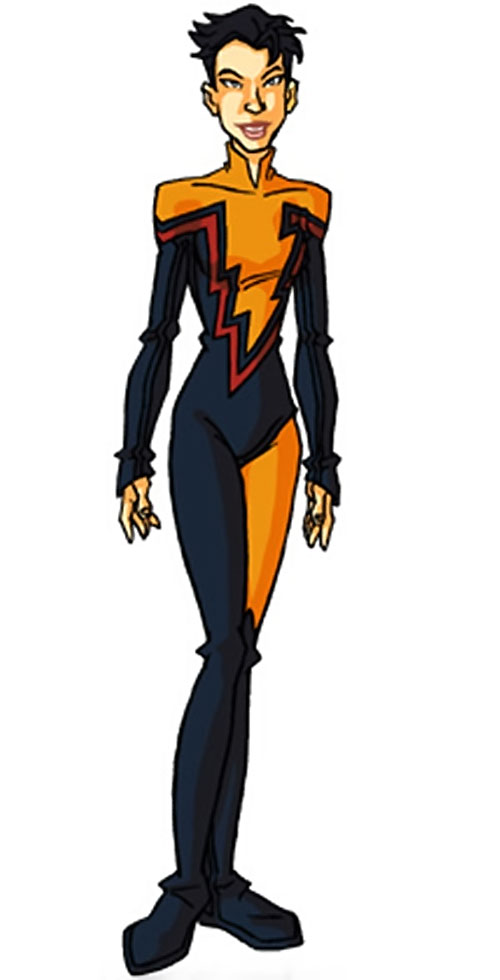 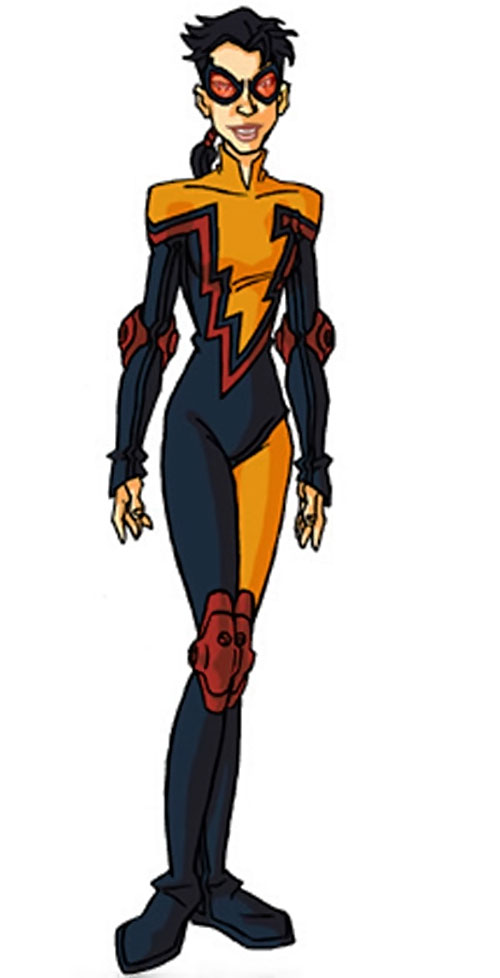