Jon Drake has decades of experience in the intelligence community. He is a highly trained combatant, both armed and unarmed.

If he says the word “Abraxas” he is transformed into the form of the superhuman Templar. Templar possesses extraordinary super human strength, and possibly other unrevealed powers.

Jon Drake has been a member of the British intelligence community for decades. A good portion of that was as a member, and then leader, of the Establishment, a Secret British government-sponsored super-group. The Establishment had been protecting Britain since the 16th Century.

It is unknown whether Templar has always been a part of Drake, or whether the two were at some point joined. The Templar was a powerful British superhuman who was rumoured to have died in China during the 1960s. It is also unknown what happened to drive him insane.

During the 1980s, Drake teamed up with Charlie Arrows and and the sorcerer Jack Carter to break up a Daemonite cell led by Kenyan.

He led the operation against the Daemonite invasion at Hobb’s Bay, and the subsequent battle over London. This resulted in the Establishment’s existence becoming known to the public, against his better judgement.

Mr. Pharmacist managed to destroy the Venusians. The Establishment then used their technology to saturation bomb Venus with a biological agent designed to eradicate the Venusians. This wiped them all out, or so they believed (a few of those on Earth had been acquired by Dr. Orwell).

Drake was then contacted by an acquaintance in the Russian government, who sought the groups help battling an outbreak of zombies. They discovered that Russian scientists had travelled to Dead Space, and creatures from there had begun travelling to Earth.

The Establishment’s power proved insufficient to close the portal, and Drake was forced to release the Templar to take care of it. He then caused the Templar intense pain until he relented, and changed back to Drake.

While unable to defeat them alone, the Establishment bought time for Charlie Arrows to contact Metavac, and protect it from the Venusians. Drake presumably died at the end of the universe.

Always calm and professional, Drake is an experienced operative. He is used to leading his team through any situation.

He almost always retains control over his emotions, whether dealing with alien invasions or politicians. And while he does follow orders, Drake will work around them if he feels it necessary for the safety of the country.

He had been secretly involved in a relationship with the daughter of an old friend from Hong Kong, who was on secondment to Scotland Yard.

The Templar, on the other hand, is a bloodthirsty madman. He is consumed by rage, whether from his containment by Drake or some other reason. He will destroy anything he comes across, especially if he believes it will hurt Drake.

(Witnessing the end of the universe, with a swarm of Venusians about to over take them) “Bugger this ! Anyone got a light ?”

Since the Establishment has operated as a secret organisation for the first 400 years of their existence, they could be inserted fairly easily.

If also integrating other histories, the Establishment could have been called the League of Extraordinary Gentlemen earlier in its existence. The new Templar would have named himself after Drake’s Templar.

Bonuses and Limitations:
Flash only occurs when changing to Templar (-2).

All members have communicators, which allow instant communication with Nowhere from any point on the planet [Radio Communication (Scrambled): 20], and they can all access a storage system, the Floating Arsenal, to access equipment that they may need on a mission. (Each member can access an 8AP ABCD Omni-Gadget).

Bonuses and Limitations:
Flash only occurs when changing to Drake (-2). 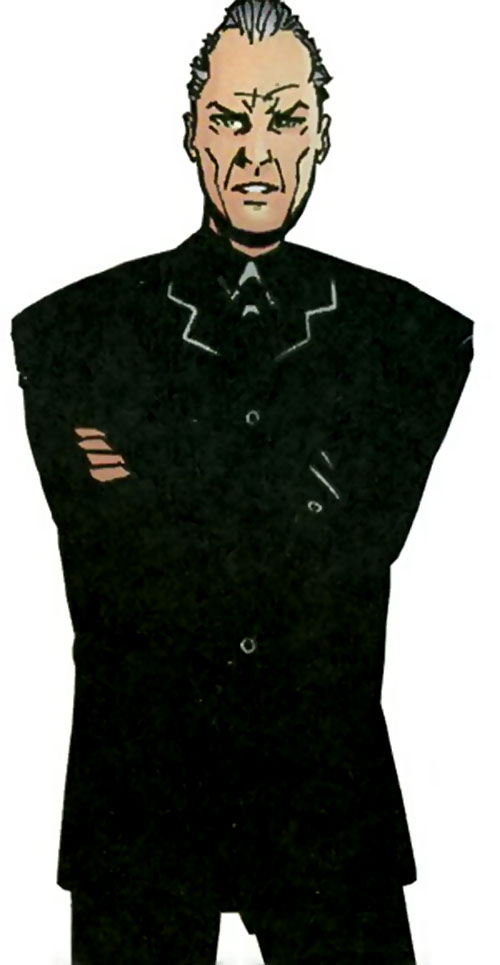