Like most mad geniuses, Harrow is astonishingly multi-talented. Not only an expert surgeon, he is a machine smith of no small talent? For instance he constructed a “mental pacemaker” to control his later creations, and a “response variator ray” to wreck havoc at the Daily Bugle by lifting everyone’s inhibitions.

He is also a genius at artificial power amplification through surgery. As a result, he has increased many villains’ existing powers to new levels.

He is an able psychiatrist, and uses his knowledge of the human mind to manipulate his henchmen and opponents alike.

Harrow’s weakness is that he is not a physical fighter – and despite his backup plans, heroes generally manage to physically confront him.

Dr. Jonas Harrow is a classic Spider-Man (Peter Parker) villain. A surgeon discredited and ostracized for his unusual experiments, Harrow’s first attempt in the world of criminal makeovers was re-constructing the badly-crushed skull of Hammerhead.

Later he altered the Kangaroo’s physique so that the Australian villain’s jumping abilities became organic. The operation was a success but the patient died during his first post-operative criminal endeavour.

Blaming Spider-Man for his inability to keep his criminals in line and alive, Harrow sicked Will O’Wisp on the wall-crawler. But Will O’Wisp drew the line at murder. Thus, Harrow’s plans to obtain “the power” were once again foiled. Harrow has since made a few minor appearances.

In at least one official Marvel source, Harrow is confused with Harlan Stillwell. It was actually Harrow who “created” Hammerhead, not Stillwell.

Jonas Harrow is a husky scientist, always clad in a white lab coat and white shoes. He wears a brown trench coat and hat on top of the lab coat while outdoors.

For some disturbing reason, he wears psychedelic glasses and is always found dishevelled and unshaven.

Jonas Harrow is a completely ruthless scientist. He’s obsessed with megalomaniacal science and revenge. He bears a true hatred to Spider-Man, who has defeated him several times. Harrow also bears ill will towards J. Jonah Jameson, whom he considers to have betrayed him using discrediting articles in his newspaper.

His common modus operandi is to imbue a person with great power. Harrow will then use that person (often by blackmail or extortion) as his personal instrument of revenge. In case they fail at performing his orders or are freed from his control, he’ll attempt to terminate them as if they we’re failed experiments only.

Once he controls a powerful instrument, he’ll settle into the role of the secret mastermind behind the scenes. He’ll then only come forth if something goes wrong or when he appears to have won.

Although he’s convinced that he’s the greatest criminal scientist of all times, he’s not foolish enough to risk his plans in order to perform some gloating.

He’d rather like to see everything finished before ascending to gloating, although he often gloats, in a loud voice, to himself, in his secret lairs. The good doctor is… slightly mentally unbalanced, with delusions of grandeur.

“Due to Jameson’s involuntary help, I’ve finally gained the power over humanity that I’ve sought ! After years of experiments Jonas Harrow has developed a machine that makes people into madmen !”

“What is he waiting for ? Kill that damned wall crawler !”

Well, although he has held a major role in enhancing the powers of several villains, he’s still small fry himself. He is such a minor character, in fact, that there seems to be no OHOTMU-like entries of him anywhere.

Thus, he could be inserted into the DC Universe as is.

Connections:
Hammerhead, Kangaroo, Will O’ the Wisp (all blackmailed into High). 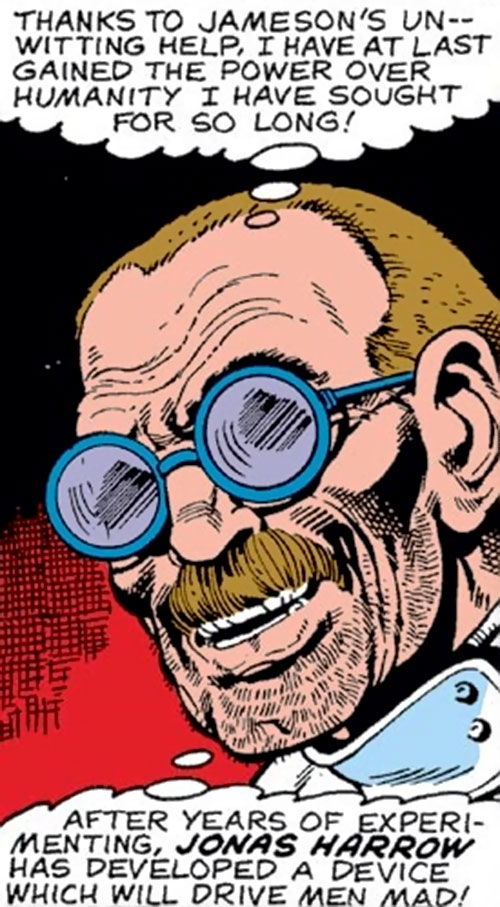