Captain Archer is a physically capable man excelling at unarmed combat, piloting and weapons use. He is relatively well-educated man who follows his intuition and feelings, and has a useful talent for diplomacy. As such, he is a non authoritative captain engaged in a democratic type of leadership.

Archer also carried the Vulcan Surak’s katra for a while, which later revitalized Vulcan society and thinking and imbued Archer with extra wisdom.

The Enterprise series is about the story of the Enterprise NX-01 as set in the mid-22nd century — 2151 — 150 years from now and 100 years or so before James T. Kirk. It introduces us to the pioneering days of space exploration, when interstellar travel is in its infancy, and a universe — and the unknown — portends both danger and awe.

Appropriately, the crew of the Enterprise exhibits a sense of wonder as well as a little trepidation about the strange things and beings they will encounter. Being among the first to explore deep space, they will have to prove they are ready for life among the stars. The show explores the intergalactic upheaval that eventually leads to the forming of the Federation. 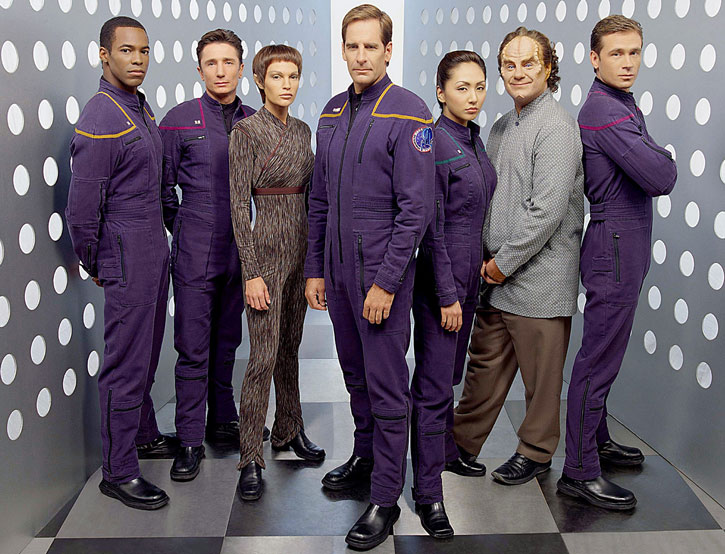 The captain of the spaceship Enterprise, Jonathan Archer, was born and raised an explorer. He followed the construction of the Enterprise since “the first girders… were put into place”. He was instrumental in convincing Starfleet to continue with her launch when the Vulcans, allies of mankind, felt humanity was not yet ready.

Consequently, he and his ship were assigned a mission of deep-space exploration. With a sensation of great awe and curiosity he and his crew set out to explore the unknown. It might be assumed that Archer’s will to involve himself in alien matters will eventually lead to the formulation of the Prime Directive.

Captain Archer looks like a classical sci-fi action hero. He has combed brown hair, black eyes and is relatively muscular. At all times, he is seen clad in the captain’s suit of his era, which is a mixture of the Star Trek suits to come, and some suits used by folks at NASA.

Archer has already begun to develop something of a galactic reputation. It states him to be fair, humble and generous, as well as a warrior capable of taking on an entire army. Archer’s calm demeanor enhances the likelihood of all the rumors being true upon meeting the man himself. That said, he seems to have quite the presence and easily connects with people.

Captain Jonathan Archer was born and raised an explorer and always wanted to be a spaceship captain.

He loves sailing, an interest that probably stems from travels on the sea with his father, another explorer, and holds a collection of sailing ship models in his office. He is also a dedicated follower of various water sports.

He believes in rightful decisions and wants to solve all the worlds’ troubles. Archer is very much an idealist when it comes to people’s well-being and rights. He prefers to do things in a direct manner. For example, he will send an away-team for exploration of new planets and civilizations instead of the usually recommended computerized probe.

In fact, Archer sometimes overrides the usual cautious protocols set by Starfleet in favor of more adventurous or faster, riskier approaches. Still, he has a strong sense of duty, but is a bit of a renegade. He is not afraid to question order, and does so, and even disobeys them if he feels in his guts that he is right.

Archer is intensely curious, which has put him and his ship into dangerous situations more than once. His curiosity is followed by a sense of wonder and excitement, as well as a little trepidation, by all the new and strange things that he encounters. He handles new technology with naive eyes and is unable to grasp it immediately.

He is also a very calm and well-spoken man. The calm is just a show of his inner resolve and peace, since he is really a very emotional man, allowing emotions or a sense of loyalty get the better out of him. He seems to feel empathy for all beings alive and will answer all distress calls.

Usually, he is a cheerful man, and it is hard to provoke him into anger. His emotional approach sometimes makes him commit mistakes.

His character is truly sacrificing in nature; a friend of humans and aliens alike. Racism is an unknown phenomenon for him.

Archer currently has a rather strange relationship to the Suliban race. He has seen both their good and their bad sides, and hasn’t decided what they really are yet, in his eyes. Although they are mostly his enemy, he is prone not to give away information about them to their enemies either.

Archer also feels that the Vulcans held back humanity for far too long. Hence, he was instrumental in finally starting humanity’s exploration of the unknown spaces out there.

Still, he feels a slight enmity towards Vulcans, except for his science officer T’Pol, whom he trusts. Although he feels that T’Pol represents the worst arrogance of the Vulcans, he has come to rely on her interstellar experience and even appreciate her wry humor. She has helped him overcome his preconceptions against Vulcans a lot.

The two characters are obstacles to one another. But they are developing a unique human/alien relationship that is rather unorthodox at this point in time. Another Vulcan once even stated that the two of them have quite a strong bond between them. Now, he wants to prove humanity’s ability for space exploration and will not accept help from Vulcans easily.

He seems to be able to communicate well with alien species, except Vulcans, whose stoicism and unemotional approach to things is completely unknown to him.

He is friends with all his crew and something of a mentor figure for his chief engineer, Charlie “Trip” Tucker III. He seems to feel a rather deep regard and trust towards his time-traveling, seeming ally Daniels (considering that Daniels has mysteriously helped the Enterprise on occasions and provided hard and concrete facts, that is not strange).

Another reason for Archer to sometimes break Star Fleet protocols is that he has some troubles with authorities. If interrogated, he will turn very uncooperative. He can be very brash in the face of authority and is generally known as a guy who doesn’t play by the rules.

He refuses to be bullied and he doesn’t bully or force others. He only gives direct orders when somebody’s life is in immediate danger (for example, forcing a dehydrated Trip to drink up their last common water reserves). He fights the chain of command when he so deems necessary, but will still abide to Star Fleet regulations mostly.

A bit of a wild card, he is, but one for the good guys. He follows up this philosophy in his leadership style also; he is more a friend of the crewmen than their particular leader. He asks for advice and produces a democratic style of leadership, in contrast to the more authoritative style displayed by Star Fleet captains in future eras.

Still, a Star Fleet captain can only break order so often, and he keeps very detailed Captain’s Logs for future captains. Such Logs are detailed, personal and humorous.

As was mentioned in the Captain Picard write-up, that era’s Enterprise has encountered Marvel’s X-Men on two occasions. The current Enterprise and her crew could likewise easily meet characters from the Marvel Universe or DCU under similar circumstances.

In the DC Universe, Archer would originate from Broken Arrow, Earth. He might be a descendant of Tommy Tomorrow, continuing a long tradition of exploring.

Drawbacks:
SIA (Curiosity). Archer is wanted by both the Klingon Empire and the Orion Syndicate, which may in game terms be represented by the Hunted Drawback if you use it. 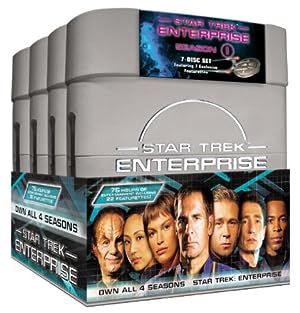