Josie Mac is a tough, talented police officer and detective. Her eye for details is amazing. She can spot important clues near a crime scene with astounding proficiency, and could tell the *exact* window when she and colleagues came under unexpected sniper fire with lethal results.

She also has the metahuman ability to find lost items. Such items “talk” to her. This work for lost items (glasses, car keys, etc.), stolen items, murder weapons that have been disposed of, paint flakes that have been swiped from a mailbox by a car in a collision , etc.. The definition of “lost” can be rather broad.

With solid concentration, she can “interrogate” a lost item. For instance she could make a knapsack “tell” her in which apartment it was before being thrown down in the street.

Josephine MacDonald grew up in one of Gotham’s Black ghettoes – but one of the less run-down ones. When she was 9, her kid brother Raymond disappeared, and was never found. Two months later, Josie started having lost objects talk to her, longing to be found.

She first used that talent around the house (her father kept losing his reading glasses). She then became well-known in the neighbourhood, helping a bunch of people finding misplaced belongings. She loved helping, and decided she would eventually become a cop to help people.

But her gift occasionally led her into trouble. These included a brick through her family flat’s window after she found a stolen TV set (which had been boosted by a local bad seed). And many hysterical curses from a woman whose son she was unable to find. Josie’s gift works for things, not people.

After such incidents, she decided not to tell people about her gift anymore. Her father told everyone that his daughter’s talent was gone.

Josie Mac got good marks at the police academy. As a result she joined the anti-crime unit – though her graduation was marred by her mother’s recent death.

Josephine was on the fast track to make detective when she found a murder weapon in a hotel room. While this discovery closed the case, the room was also occupied by the Mayor’s wife. Who was then enjoying extramarital sex with a male exotic dancer.

Furious, the influential shrew killed MacDonald’s career to punish her. Josephine didn’t get her detective badge. She was demoted to a far less prestigious unit : missing persons.

A short time after her transfer, Josie Mack picked up a phone nobody else wanted to answer. She thus became involved in a huge case. It was the kidnapping of the Anotelli grandson, from a wealthy, mob-connected Gotham Mafia family.

Assassination attempts ensued against her and her partner. Don Anotelli offered a $2M reward for information, which triggered a huge media circus. MacDonald became a scapegoat for her hierarchy. And Batman became involved. Things got even worse when Josie Mac killed a hired hitman in self-defense. Her Lt. routinely threatened her with suspension.

Despite it all, MacDonald was making rapid, steady progress in her investigation. This is what had the worse consequences. Criminals responded by having her father murdered to scare her off the case.

Josie Mac collapsed for a day of two when her father was killed. But she was then visited by Batman. The vigilante was coldly sympathetic to her plight, and decided to personally work with her to close the case.

Working quickly and using Josie’s unique talent, they determined that the kid had been kidnapped by Two-Face due to wine-coloured birthmarks on the left half of his face. The madman wanted to make the brat his Robin.

Batman and Josie Mac rescued the kid. However, Two-Face told the policewoman that he wasn’t the one who had her father murdered.

Josie Mac then deduced her efforts had been opposed not by Two-Face, but by Anotelli’s lawyer. He wanted to use the kidnapping to neutralise his boss and take over. MacDonald shot him in self-defence when he produced a gun.

Oscar, MacDonald’s partner in the Missing Persons Unit, “improved” the forensics to make sure the case was clear cut. Having thus cracked the whole case, Josie Mac was finally promoted Detective, 3rd grade.

Josie got her badge

More recently, Detective MacDonald was transferred to the most prestigious unit of the GCPD – the Major Crimes Unit. She joined when Detective Renee Montoya was under arrest after having been framed by Two-Face, who wanted her for himself.

Replacing Montoya, she was partnered with the hard-nosed detective Crispus Allen. As the youngest and least experienced detective with the MCU, Josie’s integration wasn’t going to be smooth. But she impressed even Allen with her deductive skills, professionalism and incredible eye for detail. MacDonald quickly became one of the boys.

Detective MacDonald is now a full member of the MCU. Since Montoya’s return to duty, she has been partnered with Detective Marcus Driver. More recent (2010) appearances showed her as a partner for Harvey Bullock.

With the Batman mantle now being worn by Dick Grayson, Bullock and MacDonald have openly worked with Batman on a case, and there likely will be further examples of this.

Josie dresses in a stylish and trendy way, but always with practical street clothes.

Josie Mac is a determined professional and a tough young woman, working as police in one of the worst cities of the US. She’s smart and sharp, and quickly gained respect even from a hardarse such as Crispus Allen. Allen mistakenly kept calling her “MacKenzie” at first, which became her nickname.

She is prideful, and hates to roll over or being dissed. She fights to the bitter end, even taking unreasonable risks such as pursuing a heavily-armed gunman alone in order to advance her case. She is used to fighting for respect since she is young, Black and female. However, this was less of a problem among the MCU, a diverse team.

Josie was very close to her parents. Sge is still haunted by their death and the childhood trauma of her brother’s disappearance. As a result, she is particularly motivated by missing child cases.

When she integrated into the MCU, her colleagues did the traditional MCU practical joke. The previous shift hid the newbie’s coffee mug before she arrived to the office. Josie’s ability to unerringly find her mug every single morning despite her colleague’s best efforts became a minor myth within the unit.

“No, look. This paint comes from the mailbox.”

“Some cops go through their whole career without firing a gun. And I’ve just killed someone within my first two years. Oh God…”

Most objects will have Mystical Atributes at 0 APs. 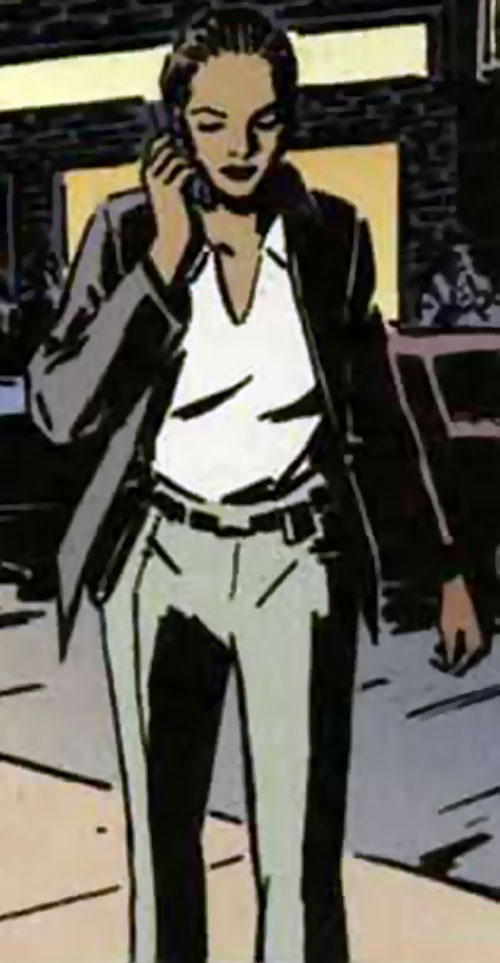