She can become a being of “pure action” at will, further enhancing her speed, agility and reflexes (in DC Heroes RPG terms, Superspeed). During these periods, her hyper-fast movements are automatic and instinctive rather than guided by conscious thought.

She can focus her energies to empower a pair of batons, thus:

The batons may also be fitted together to become a staff, like Mockingbird’s.

She also wears a pair of gauntlets which allow her to focus these energies in creating the batons out of pure energy. With the gauntlets she requires no physical baton as a focus.

Janice Yanizeski is the daughter of compulsive, and generally unlucky, gambler, Walter Yanizeski. Walter’s obsession with risk left a lasting impression on his daughter. When she happened across his secret stash of cash in their back yard, he taught her to always keep an ace up her sleeve and an escape plan in case of trouble.

Fairly athletic, but otherwise unexceptional, quiet and dull, she gained a scholarship to the University of Arizona . There she played basketball.

Getting mixed up with criminals betting on the game, she double-crossed them. She deliberately threw a game she had a side-bet on. When they confronted her, and threatened violence, she offered them her father’s stash of cash to pay them off. They badly beat Walter and took his money.

Disappearing, Janice resurfaced a few years later as the mercenary Joystick. She dedicated her new life to taking risks. She entered the “Great Game”. This was a contest whose wealthy patrons employed or manipulated costumed fighters into battling each other, wagering on the outcomes. Joystick was employed by Chu Chi Huan of Chi-Huan Associates.

One of her earliest opponents in the Great Game was one of its major players, el Toro Negro, whom she defeated. She was then dispatched to New York, where she would target the non-player the Scarlet Spider. El Toro Negro, however, was so upset by his defeat that he went rogue from the game, and followed her to New York.

Finding the Scarlet Spider, mainly through luck, she attacked him as part of the preliminary bout. But the Green Goblin (Phil Urich) also got involved, alongside the Spider. Succeeding at initiating the battle, she blinded them with her batons, enabling her to escape.

She set a trail for the Scarlet Spider, claiming that innocent lives would be on the line if he didn’t turn up. She was disappointed when the Goblin turned up instead, but attacked him anyway. The fight was interrupted, first by el Toro Negro, out for revenge, and then by the Scarlet Spider.

Joystick was badly damaged by el Toro Negro, but her life was saved by the Goblin. Even barely able to stand, when the Spider was busy fighting el Toro, she took an unsuccessful blast at him, as he was still the primary target of the Game. While he continued battling el Toro, the Goblin let Joystick leave.

She was later dispatched by the Great Game to attack rogue player Kaine. She went alongside Polestar and the Rhino, although they were competing for the kill. This also brought them into conflict with Spider-Man (Ben Reilly). Joystick was beaten when Spider-Man crushed her gauntlets, but escaped while he was busy capturing her fellow Gamers.

She again clashed with Spider-Man when he was investigating Justin Hammer’s attempts to use the Great Game as a means to eliminate its sponsors. During this she learned that el Toro Negro had been his agent for a while, and had let her win their original fight.

They fought again, and he would have killed her if not for Spider-Man’s intervention. She helped him expose the plot, and the sponsors ended the Game.

She was later recruited by the Crimson Cowl (Justine Hammer) into her Masters of Evil. She was taken out early in the Thunderbolts‘ infiltration of the Masters base, but managed to evade or escape prison by unknown means. She was recruited by the revived Great Game, attacking the United Nations alongside Polestar and Tremolo. There they battled Namor, Mr. Fantastic and the Thunderbolts. 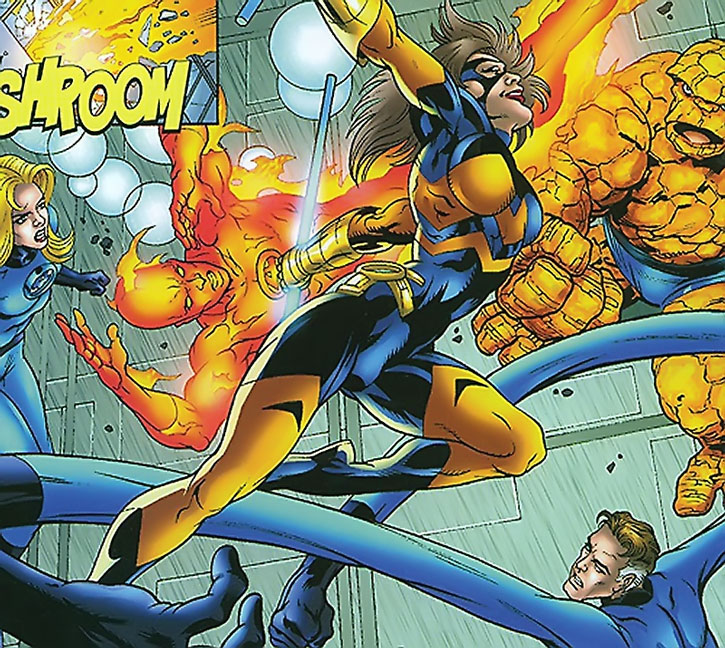 When the fight seemed to be turning against them, the gaming council armed the explosives within their agent’s armours. As a result, Joystick helped the Thunderbolts resolve the crisis in exchange for protection from the Great Game.

Joining the Thunderbolts she fought alongside them against Fathom Five’s (an Atlantean terrorist faction) attack on Manhattan. Other missions were opposing Hydra’s attempt to destroy Manhattan, Batroc’s Brigade, and the Purple Man taking control of Manhattan and all other superhumans there.

She flirted with team mates Atlas and Photon, while fending off unwelcome advances from Speed Demon.

When Songbird took over as team leader, she tried to have Joystick taken into custody by the authorities. But the CSA (Commission of Superhuman Activities) refused. Furthermore, when they ordered the Thunderbolts to battle the New Avengers, they had Joystick infiltrate their Stark Tower headquarters, where she set up surveillance devices.

She succeeded, but was confronted by Spider-Woman, who beat Joystick, but couldn’t make her give up. In exchange for her actions, the CSA pardoned her.

Continuing to serve with the Thunderbolts, Joystick was actually working as a double agent for the Grandmaster. It’s uncertain how long she had been working for him, since her powers seem to have come from the Wellspring of Power which he had used to empower the Squadron Sinister. Thus, it is possible that he originally gave her her powers.

She battled the new Squadron, who called themselves Supreme Power. They had also recruited Speed Demon when he was thrown out of the Thunderbolts by Songbird.

When Zemo returned to the Thunderbolts, just prior to the Civil War, he began making preparations to oppose the Grandmaster’s plans. The Thunderbolts were dispatched during the Civil War to capture super-villains, who were taking advantage of the heroes battling among themselves. Zemo offered the captured villains the opportunity to join the Thunderbolts, turning it into a veritable army.

When Zemo dispatched Thunderbolts to monitor the Squadron’s activities, Joystick confronted Speed Demon. It is possible that she already knew that he was secretly working for the Thunderbolts. She surprised him with her true powers, leaving him powerless by breaking his legs.

The Thunderbolts finally confronted the Grandmaster and the Squadron at the Church of the Universal Wellspring. There, Joystick betrayed them at the vital point. Further empowered by the Wellspring, she battled the Thunderbolts.

When Zemo killed Grandmaster, she managed to get the drop on him. She was about to strike when Speed Demon, his legs healed and powers returned by the Wellspring energies, arrived and beat her. She was taken into custody.

An action junkie, Janice loves fighting or undertaking dangerous activities. She thrives on challenges, and if she doesn’t feel her current situation is dangerous enough she’ll do her best to make it more challenging.

Rarely taking anything seriously, she’s often flippant and sarcastic towards her team mates. She seems unwilling to become attached to others, keeping her emotions closely guarded from other to protect herself. Joystick only enters into casual relationships with others.

She acts solely in her own interests, happily betraying Earth to probable destruction so she could find new challenges.

“No sense playing unless the stakes are high.”

Joystick: “And why would I risk my neck ?”
Mr. Fantastic: “To help save these people and because I don’t think you can !”
Joystick: “Yeah, well, I’ll only fall for that one ’cause I just can’t help myself.”

“Who was dumb enough to bet against me ?”

“It’s all a game, Blizzard. Once you figure that out, playing is a lot more fun !”

“See, that’s why love’s the only game I don’t play, big guy. You can never win.”

Spider-Woman: “This can’t be a solo operation, Joystick, not even you could be so stupid !”
Joystick: “Sure I could be !”

“Why take a man out when he’s already down ? A man bends, and you get what you want… but if a man breaks — that gets you what you need. Anyone can crush a body, but crushing a spirit… that’s when you know you’ve really won.”

“I take Jimmy’s knees. I take Jimmy’s powers. But most importantly, I take his spirit. And I liked him, too. But the strong are strong, the weak are weak.”

“That’s the thing about playing the game… you gotta play the players, too. One of ’em needs to think you’re dumb – next needs to think you’ve got a hitch in your spin-kick – don’t call me Janice ’cause that’s too painful for me – pick a name like Joystick to make them think you’re a joke – all of ’em need to know something, just never the truth. Because the truth tips your hand. The truth gives them the advantage. So you hide the truth about yourself. You hide it deep… deep inside. Hide it from everyone. Hide it so deep, maybe… maybe you get to the point where you’ve hidden from yourself as well. See, when you’ve done that… hidden it, buried it… crushed your own spirit… that’s when you’ve really won. Because that’s when you’ve beaten your toughest challenger… that’s when you’ve beaten yourself.”

She was involved in Roulette’s underground games.

Joystick thrives on challenges, enjoying throwing her self into situations where she’s pushed to her limits, or even out of her depth.

When faced with an inferior opponent, she’ll often handicap herself so that they have a better chance. As the “Living Embodiment of Action” she has access to a reserve of power which she only accesses in tough situations, partly to increase the challenge of the situation and partly to hide her link to the Grandmaster.

It’s unknown whether she still has access to this following the events at the Wellspring.

When faced with a situation doesn’t seem to pose enough of a challenge, she’ll try to make it harder on herself, such as when she found her infiltration of a Hydra carrier going too easily. She radioed them to let them know where she was committing sabotage so that they’d send guards to try to stop her.

Joystick has previously had connections with the Great Game, the Thunderbolts, and the Grandmaster, but after betraying the first two, she’s unlikely to get any help from those (the Great Game may even become an Enemy), and unless the Grandmaster turns out to have survived (which isn’t inconceivable) that one will also be redundant.

The way her batons work is pure guesswork based on available evidence and little explanation.

Source of Character: Marvel Comics (up to Thunderbolts #109). 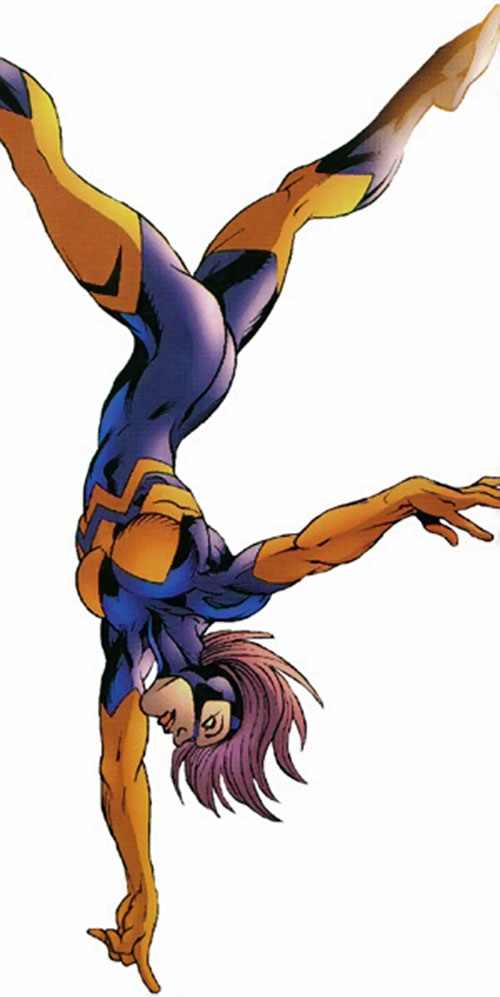 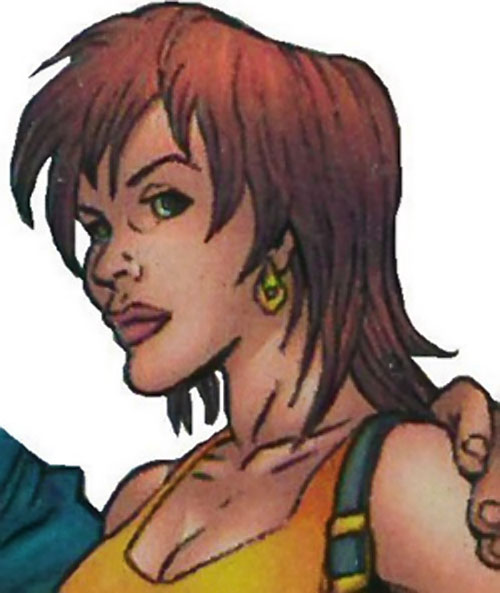 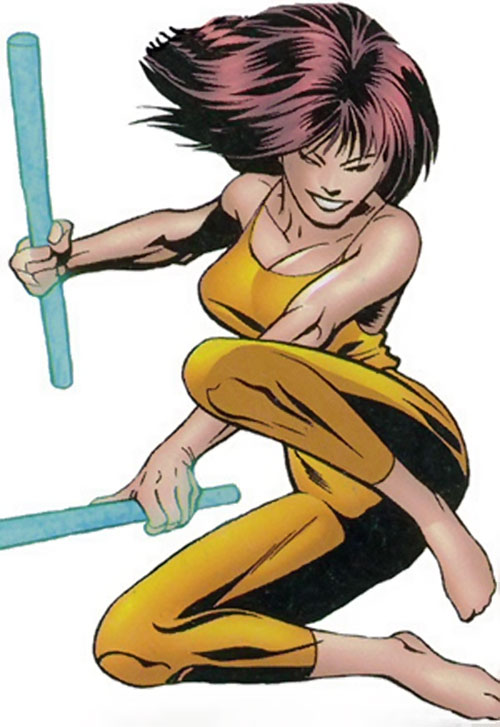 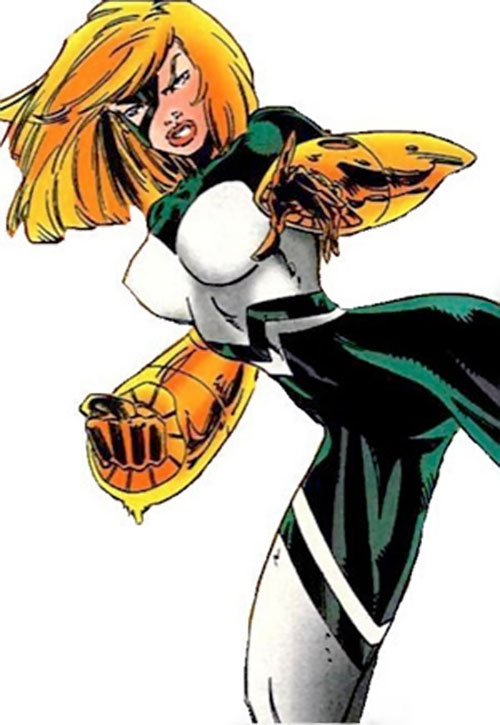 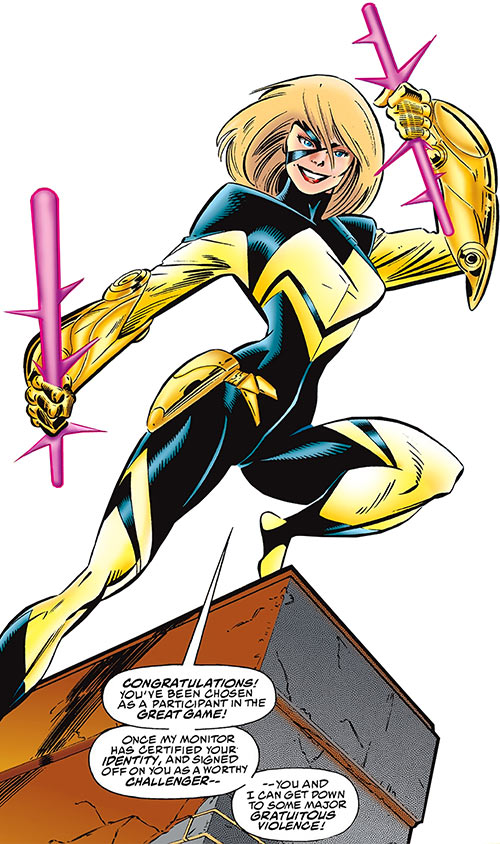