Judge Cassandra Anderson is an extremely capable criminal investigator, and is highly skilled in armed and unarmed combat.

She is also a powerful telepath, with a wide range of psychic capabilities. To date, she has demonstrated telepathic communication and probing, psychometric ability (postcognition), and has experienced precognitive warnings of danger at both local and planetary levels.

She does not appear to be able to mount a mental assault, at least not on a routine basis. But she is more than capable of defending herself, should she be the subject of such an assault.

Like Dredd, Anderson has a long history. These notes represent the bare highlights. Judge Anderson’s first appearance was in 2000AD Prog 149, the first part of “Judge Death”, in which the eponymous arch-fiend made his first visit to Mega-City One.

Anderson heroically sacrificed herself to contain Death. She allowed the bodiless monster to possess her, before activating a canister of Boing!™, the miracle plastic. This trapped both Death and Anderson in a seamless block. This took place in the year 2102.

Death was later freed by his fellow Dark Judges, Fear, Fire and Mortis, and resumed his genocidal activities. Anderson, still alive, and now freed from the Boing!™, found that she was able to track Death. Her means was the psychic link forged during the long months spent battling Death for possession of her body and soul.

Together with Judge Dredd, Anderson was able to defeat the Dark Judges, if only temporarily.

Later, Anderson was hand-picked by Dredd as a member of his Apocalypse Squad. This was a small team which infiltrated Sov-Blok missile silos and destroyed East-Meg One at the climax of the Apocalypse War.

In 2106, Anderson accompanied Dredd to the near future year of 2120, in which year a disaster was predicted for Mega-City One. On arrival, the two Judges discovered a city of the dead, ruled by a powerful psionic called the Mutant, and haunted by zombies – including Dredd’s own.

With some difficulty, the two were able to defeat the Mutant, and escape back to 2106. At this point Dredd changed the future timeline by the simple expedient of killing Owen Krysler, AKA the Judge Child, the young man who would later become the Mutant. Dredd used a tactical nuclear weapon.

She wears the same uniform as Dredd, except that her badge bears the letters “Psi”, and she seldom if ever wears a helmet.

Psi-Judges are afforded a great deal more leeway than their mundane colleagues. Personality quirks which would result in disciplinary action for a normal Judge are tolerated, if not encouraged.

Anderson is therefore much more engaging than the typical Judge, and is both compassionate and humorous. She enjoys mild rebellion, and is probably the only person who can get away with calling Dredd “Joe” to his face.

She has experienced grave doubts about the Judge system in the past. Anderson went so far as to hand in her badge for a year, but she appears to have resolved her doubts, and is back in the saddle.

Although she displays a kinder, gentler face than Dredd (well, who doesn’t ?) Anderson is a formidable opponent. She is tough and determined, and quite prepared to kill when necessary. There is probably no-one alive that Judge Dredd trusts and respects more than Anderson. That says it all, really.

“Remember, I’m a telepath. I know all your guilty secrets.”

Advantages:
Area Knowledge (City – Mega-city One), Headquarters (Expansive – Hall of Justice), Iron Nerves, Security Clearance (Judges, High), Sharp Eye, Scholar (The Law, Weird $#*!), Attractive, Miscellaneous Advantage: Anderson is aware of the location of Judge Death whenever he is active and in the same dimension. Death may “lay low” for a period, should he choose, but Anderson will be aware as soon as he returns to his murderous ways. 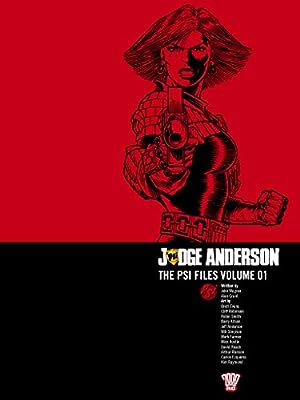 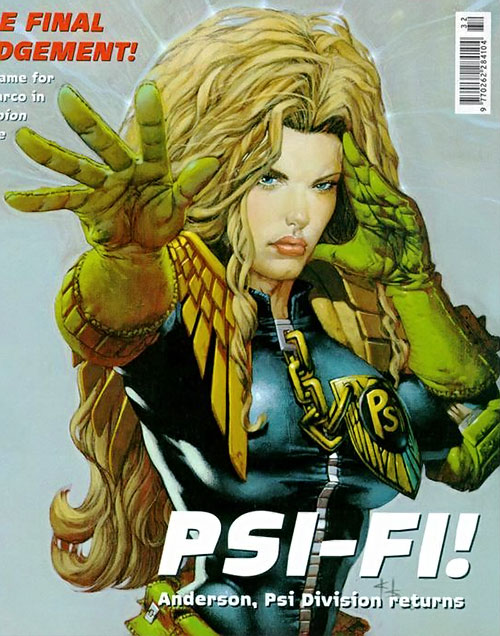