Dredd has appeared in almost 1200 weekly “progs” of 2000 AD, plus about 60 issues of his own Megazine. Suffice to say that Dredd has been enforcing the Law on the streets of Mega-City One for over 40 years, and is still the hardest Judge on the force. Mega-City One, like Batman’s Gotham, is practically a character in its own right.

A fascist dystopia, alternately terrifying and hilarious, MC-1 is an enormous sprawl of semi-autonomous city-blocks, lying between the radioactive Cursed Earth and the equally toxic Black Atlantic. On a normal day, MC-1 can be pretty hostile. The pressures of life in the future drive many citizens violently insane, and common-or-garden violent crime is an everyday hazard.

Dredd is a superbly fit, fanatically devoted member of the most highly-trained law-enforcement agency in history. He is tough, brave, intelligent and resourceful. He personifies the power of a highly powerful police state, with stone cold authority and nerves of steel. 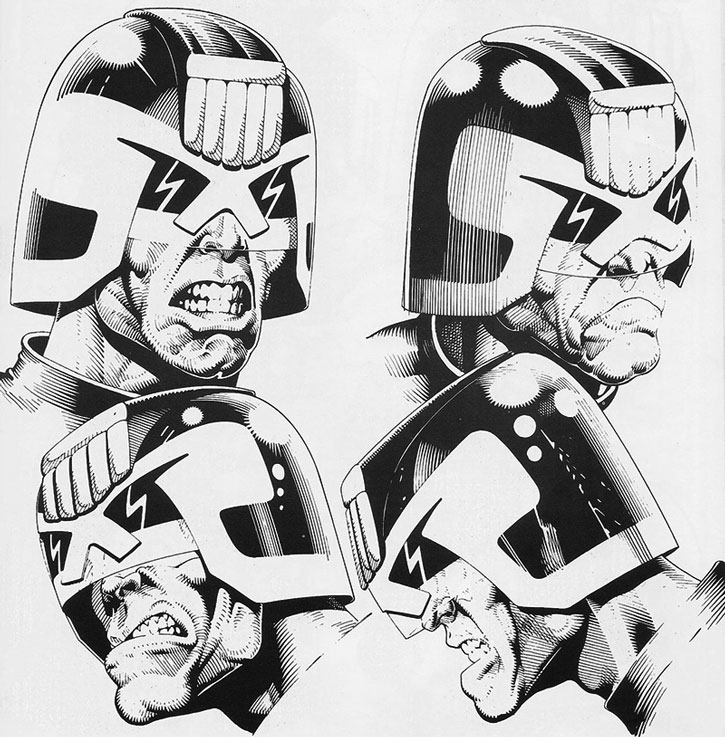 As a fanatic, Dredd is highly confident in his abilities. This is justifiable as he single-handedly won World War IV and repelled alien invasions.

Dredd is a hard man to take by surprise. After decades on the streets, and literally thousands of attempts on his life, his senses have been honed to almost animal levels of keenness. In DC Heroes RPG terms this is reflected by the Danger Recognition subskill of Military Science. Note that Dredd’s entire life is equivalent to a battlefield for the purposes of this skill.

Cloned from the DNA of the legendary Chief Judge Fargo, both Joe and Rico Dredd excelled at the Academy of Law. They graduated with honour to become full Judges in 2079. Joe had always been the model Cadet, scoring superbly in every test. He stuck so rigidly to the rules laid down by his Judge-Tutors that he earned the lifelong nickname “Old Stoney face”.

Only Rico could beat him and invariably did. But his extra flair came with a fatal flaw in his personality. Joe had to arrest his own clone brother shortly after they hit the street. Rico had started a protection racket. It was only then that the Justice Department realized what a special Judge they had in Joe. 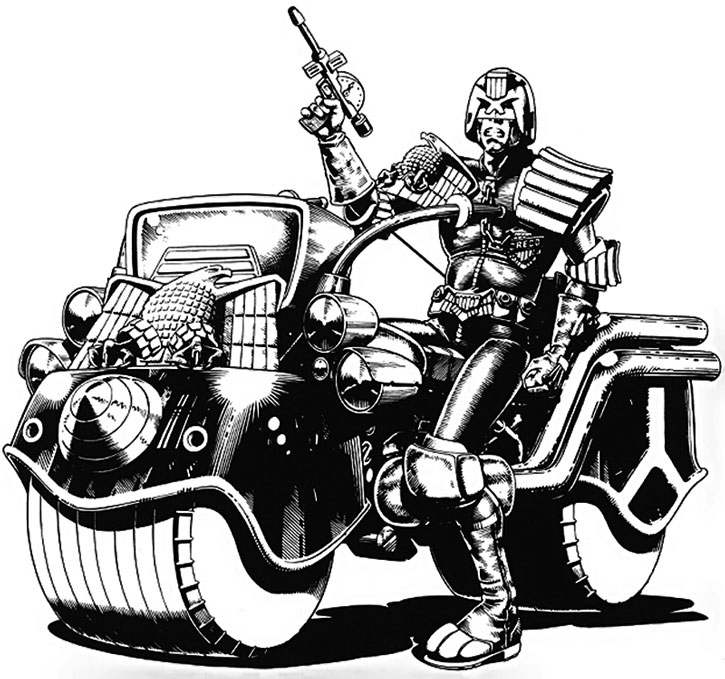 Morphy, the Judge who passed him on his final street assessment, had recognized Joe Dredd’s potential right away. They became firm friends over the years. In fact, Judge Morphy was almost like a father to Dredd an he was always there for him if he needed any advice.

Judge Dredd spent the next 20 years on the streets of Mega City One, gaining the experience and the reputation that made him the city’s top lawman.

So many catastrophes, part 1

The Judge’s fears were realized when Call-me-Kenneth started the Robots Wars. Thousands of citizens and Judges lost their lives before the robots were defeated. Dredd had been helped by Walter the Wobot during that conflict. As a result the vending droid soon moved into his apartments at Rowday Yates Conapts, determined to serve the Judge – whether Dredd liked it or not !

Shortly afterward Rico returned, having served his full term on Titan for his crimes. He came to seek vengeance on his brother. This time, Joe was forced to kill him. This saddened Dredd greatly, even after two decades of being toughened up on the streets – a rare example of emotion in the nearly inhuman judge. 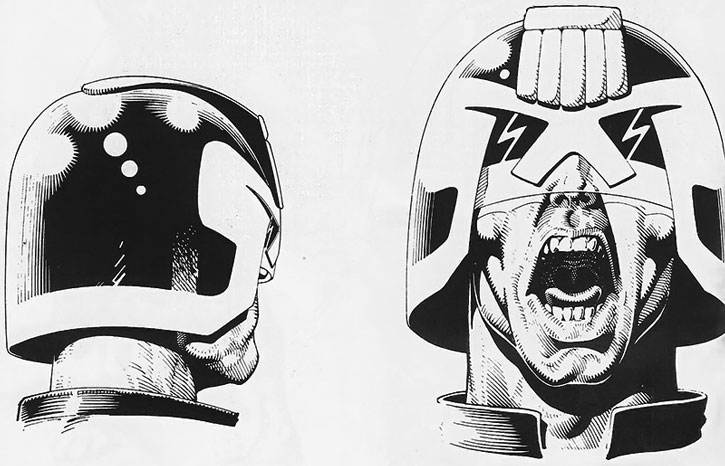 A formidably hectic period followed for Judge Dredd. First he was appointed Judge-Marshal on Luna-1 for a six months term. Judges were not well respected there. But by the time he left Dredd had reorganized the local Justice Dept and the people there had learned to obey the Law.

Next, Judge Dredd was asked to lead an incredibly dangerous mission to carry vaccine across the Cursed Earth to the stricken Mega City Two. When the Judge returned to Mega-City One, the insane Judge Cal became Chief Judge and Dredd had to marshal a ragged resistance force to overthrow the tyrant.

So many catastrophes, part 2

Then Psi-Division’s top precog, Judge Feyy, warned of an impeding catastrophe unless a mysterious boy, known as the Judge Child, was installed as Chief Judge. Dredd pursued the boy halfway through the galaxy, but realized he was evil and left him on the planet Xanadu.

This decision was a controversial one. But his judgement was vindicated when a visit to the future revealed that a clone of the Judge Child called the Mutant was going to cause the catastrophe rather than prevent it.

During this trip to 2120, Dredd’s eyes were gouged out by the Mutant. He had bionic replacements fitted before he and Psi-Judge Anderson eliminated the future threat by killing the infant clone in 2107.

Before this, though, disaster had already overtaken Mega-City One in 2104. East-Meg One launched a massive nuclear strike against them. Dredd was the American Judges’ natural leader during the Apocalypse War. He was finally forced to take an elite squad of Judges on a counter attack mission to destroy East-Meg One.

Their success ended the war and the rebuilding of the nuclear scarred Mega-City One began in earnest.

In the years which followed, life became ever tougher in Mega-City One. For the first time, Dredd began to have doubts about his role as a Judge. When he was asked to break up the Democratic Charter March in 2109, Dredd fulfilled Chief Judge’s Silver order to the letter. But he wasn’t convinced that his actions were justified.

Some time after, Mega-City one came under attack from the Judda. These were warrior clones based on the best material in Mega-City One’s Genetic Control laboratories and led by a renegade Judge, Morton Judd. Chief Judge Silver, who was aware of Dredd’s slowly growing reticence, authorized the rehabilitation of Kraken, a clone based on the same genetic stock as Dredd.

Dredd’s doubts came to a head after he discovered he couldn’t answer a boy’s questions about Judges to his satisfaction. As a result, he retired. His final act was to veto Kraken’s deployment as a Judge. 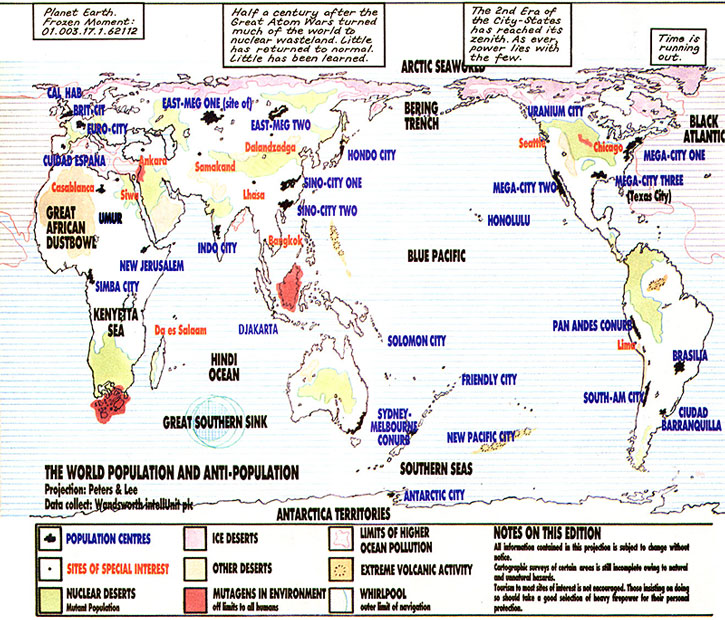 However, as Dredd left for his Long Walk to the Cursed Earth, Kraken was confirmed a full Judge and given Dredd’s badge. For the general public, Dredd had never retired.

After a hundred day Dredd was attacked and almost killed in the Cursed Earth. He became an amnesiac known as the “Dead man”. Recovering his memory he allied with retired Chief Judge McGrudder, also on her Long Walk. They returned to Mega-City One.

There, “Dredd” (actually Kraken) had betrayed the city and allowed the extradimensional nihilist Judge Death to take power. Dredd slew Kraken and led the remaining Judges against Death. The Judges’ authority was in severe question, and Dredd forced a referendum on the matter. The gamble paid out as the citizens decided they’d rather be governed by Judges.

Dredd next saw off the threat of Sabbat the Necromagus, with the help of Hondo City’s Judge Inspector Sadu and the famed mutant bounty hunter Johnny Alpha, Strontium Dog.

Then he had to protect the city from Judge Grice. The renegade had escaped from Titan and sought revenge on Mega-City one Judges. Grice unleashed the Meat Virus, a deadly alien plague, but a weakened Dredd finally killed him. Once the antidote was distributed the city was safe once more. But recent crises meant there was a chronic shortage of Judges.

Chief Judge McGrudder attempted to remedy this with the Mechanismo Project – robot Judges. Dredd opposed her bitterly and even falsified evidence to support his claims. This was discovered and he was sentenced to Titan for the second time in his career. However, it turned out the robots were unreliable and one attempted to kill McGrudder. She chose to pardon Dredd and resign.

At this point Dredd offered his name for the position – to general surprise, since he had already turned down the honor several times to remain on the street. It was but a ploy to unmask somebody who was tampering with the designation process, however.

Judge Joe Dredd is the Law. He’s a big man, although his bulk appears to be variable, depending on the artist. He has a large, pugnacious jaw, and a habitual scowl, which is the source of his nick-name among the younger judges: “Old Stony Face”. 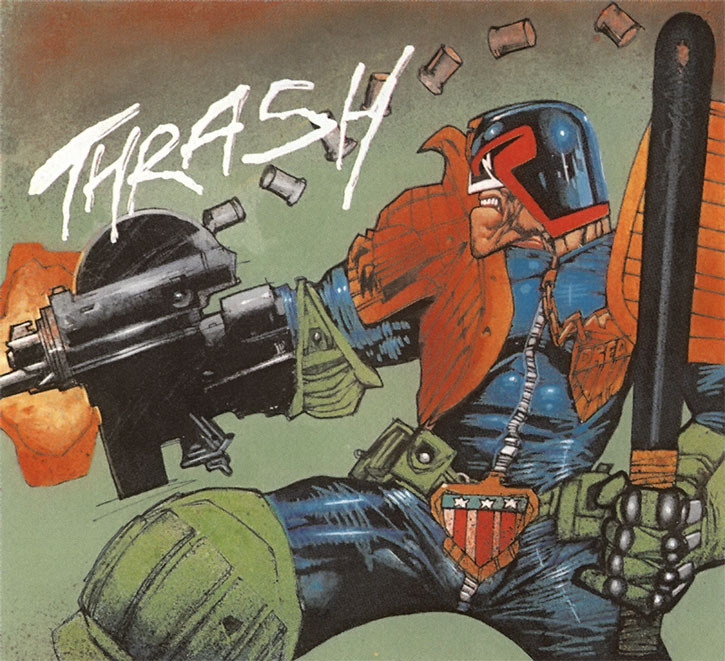 He is never seen out of uniform, nor even without his helmet. The uniform is based on a black skin-tight body-suit, of a leather-like synthetic material. Boots, knee-pads and gloves are olive green, and thickly reinforced. At the left shoulder is a large pad, balanced on the right by a stylized eagle. A badge on the left breast bears his name, “Dredd”.

A chain hangs in a loop from the badge. A belt, with eagle buckle, carries ammunition, hand-cuffs, etc.

Shoulder-pad, eagle, badge, chain and belt are all coloured gold, as are his elbow-pads. The helmet is black, with red trim and a darkened visor.

None, really. Dredd is pretty much a cipher, a tool in the brutal machine that is the Law in Mega-City One. He doesn’t have many friends, or a love life, or any other kind of a life really. From the moment of his artificial conception, his life has been dedicated to the Law. He has shown occasional signs of human sentiment, but they never seem to last for very long.

“Next time, we get our retaliation in before they attack.”

Concerned citizen : “I’ve got him ! I’ve put him under citizen’s arrest, Judge !”
Dredd : “Citizen’s arrest are *illegal*. You’re under arrest.”

Probably not. Batman, of course has met him a few times. In terms of Dimensional Travel, MC-1 is pretty close to the DCU, and is virtually next-door to the world of Hex. Travel Distance is 1 or 2.

No retirement for Judges

Those stats are for Dredd in his prime, which is the most likely state he’s likely to appear in most campaigns.

In the actual continuity, at the time of this writeup, Dredd is 55. His DEX has been lowered to a 06, and he has been brutally blinded. However his eyes were replaced with vat-grown biologically enhanced models with Thermal vision: 03.

By Phil Dixon and Sébastien Andrivet.

Helper(s): Peter Piispanen, Bil, Nick Yankovec. History based on Mike Buther’s The A-Z of Judge Dredd.. The scans of How to draw Judge Dredd by Cliff Robinson used as illustrations were done at Plot holes in my lawn . 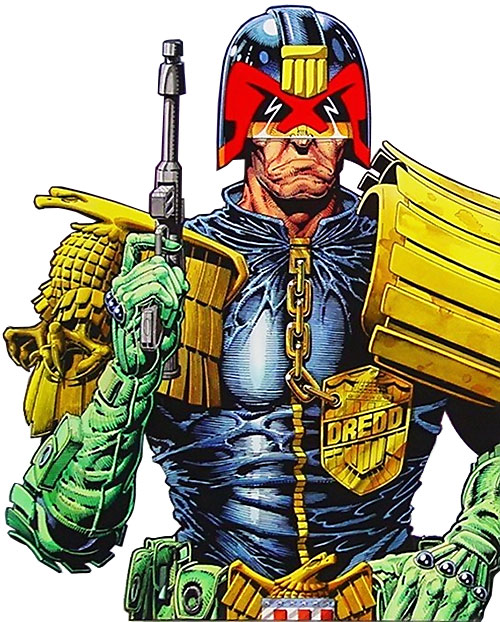 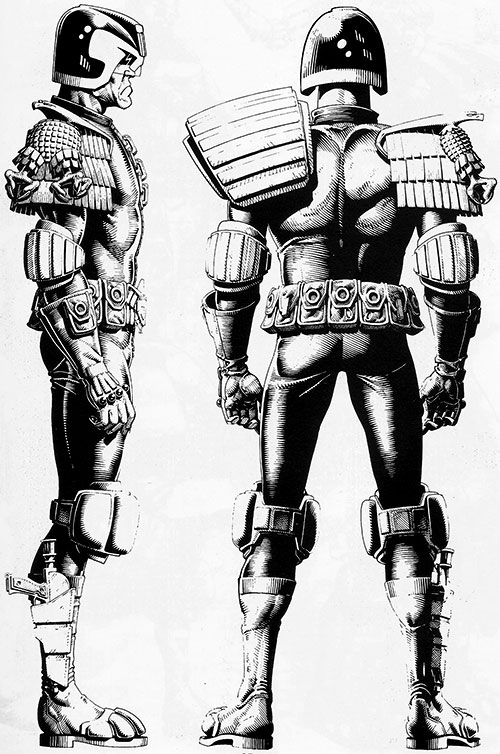 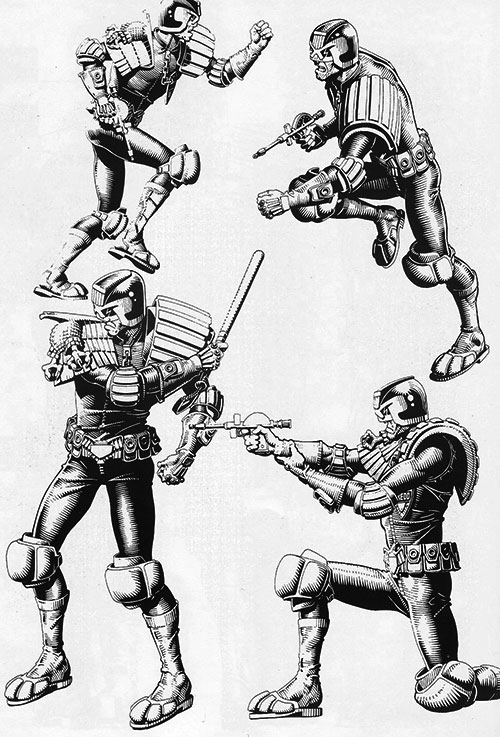 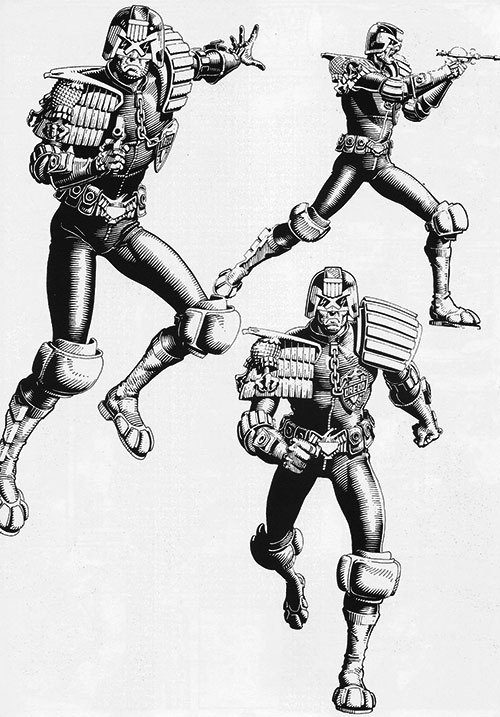 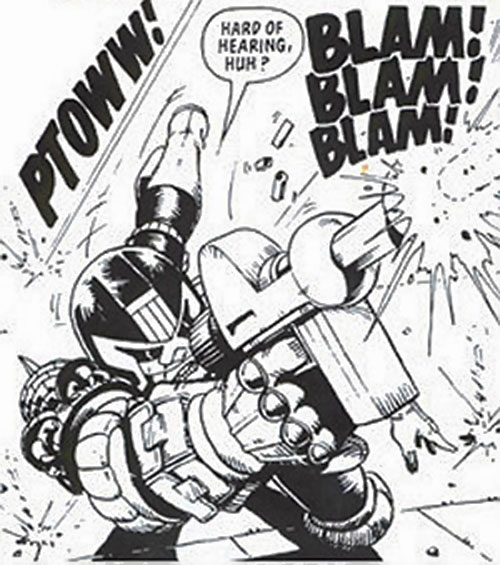 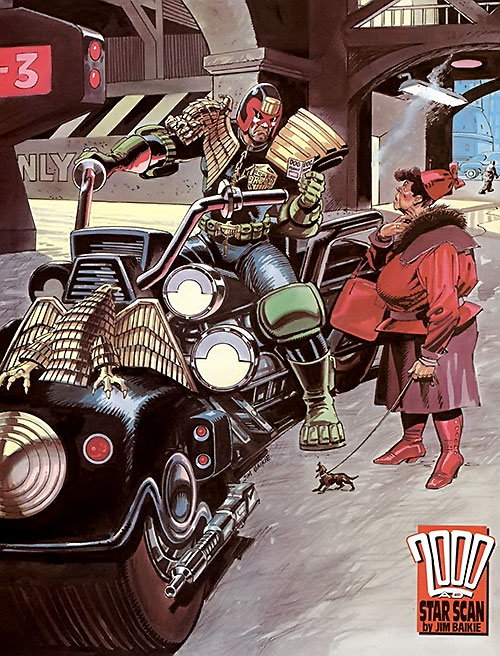 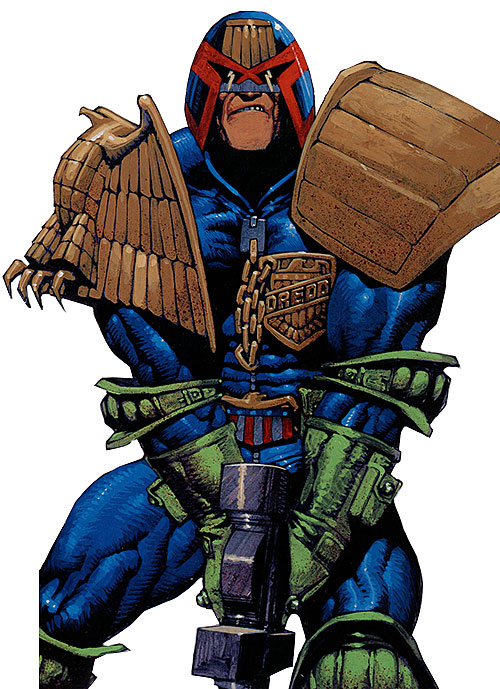