Judge Fear is an undead monster from an alien dimension . He inhabits human corpses.

In his most basic form, Fear resembles a cloud of greenish fog. In this form, he is impervious to most attacks, and can pass through small gaps (keyholes, etc.). But he cannot pass through seamless barriers.

In this form, he can temporarily possess living victims (in DC Heroes RPG terms, Personality Transfer). However, he cannot display his other powers until he gains control of a suitably prepared corpse.

When inhabiting a corpse, Fear is much more deadly. He spreads terror wherever he goes, and can frighten strong men to death with his terrifying gaze. In this form, he is entirely corporeal.

Fear and his fellow dark Judges have displayed other abilities on occasion. One example was long-distance mental control. These should be treated as plot devices to allow them to escape from confinement.

Mounted at his shoulders are what appear to be steel shoulder-pads, but are actually man-traps, which he throws with considerable accuracy.

Fear’s helmet incorporates gates at the front. It opens to reveal a cloud of swirling chaos instead of a face. This hideous visage can kill with a glance.

If his host body is destroyed, Fear will assume a gaseous form, with his helmeted head visible within the vapours.

Pretty much a stooge for Judge Death, Fear has little to say. Give Death all the good lines.

“Gaze into the face of Fear !”

Four Dark Judges would make a credible threat for a low to mid-powered DCU team. They have the D-Jump: why not ? 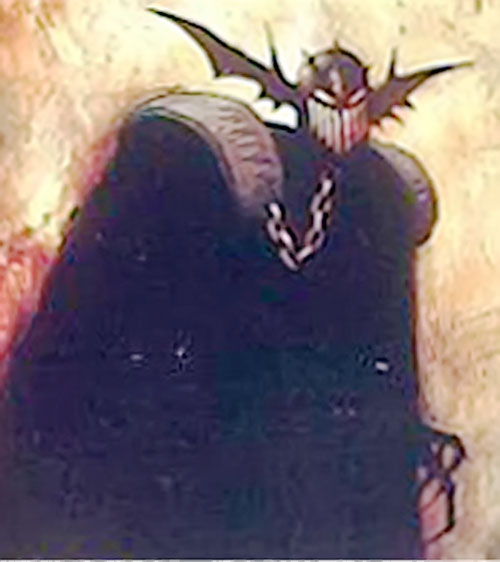