Judge Mortis is an undead monster from an alien dimension, who inhabits human corpses.

In his most basic form, Mortis resembles a cloud of greenish fog. In this form, he is impervious to most attacks. He also can pass through small gaps (keyholes, etc.), but cannot pass through seamless barriers.

In this form, he can temporarily possess living victims (in DC Heroes RPG terms, Personality Transfer). However, he cannot display his other powers until he gains control of a suitably prepared corpse.

When inhabiting a corpse, Mortis is much more deadly. His touch brings decay. In this form, he is unable to disperse except for defence (no flowing through gaps).

Mortis and his fellow dark Judges have displayed other abilities on occasion, such as long-distance mental Control. These should be treated as plot devices to allow them to escape from confinement.

Judge Mortis is, quite obviously, a walking corpse. He looks particularly macabre, because his skull has been replaced with that of a cow or steer. This doesn’t seem to impair him in any way. What little flesh remains on his figure is shrunken onto the skeleton, and is greenish in colour.

He dresses in a variation on the MC-1 Judge’s uniform, with a lack leather-like body-suit and silver-coloured accessories. All accessories are somewhat grisly : a skeletal pteranodon replaces the eagle on one shoulder, while the other shoulder is covered by a pad styled after the bars of a cell.

Mortis wears no gloves nor boots, nor knee and elbow pads. This emphasises his skeletal appearance.

If his host body is destroyed, Mortis will assume a gaseous form, with his cow-skull head visible within the vapours.

Pretty much a stooge for Judge Death, Mortis can speak, but rarely does. Give Death all the good lines.

Four Dark Judges would make a credible threat for a low to mid-powered DCU team. They have the D-Jump: why not ? 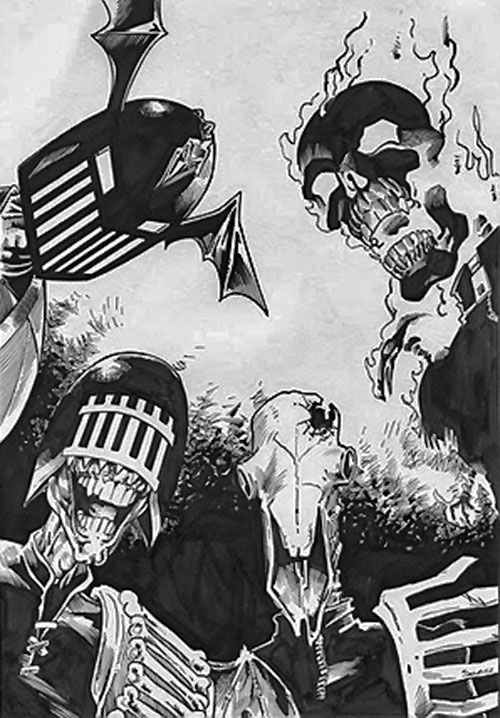