Jukko is a highly experienced commando and anti-terrorist soldier. Furthermore, he is a world-class close combat fighter – using many ju-jitsu, presumably of the Brazilian kind. He actually prefers to engage superhumans in hand-to-hand combat when viable, using their overconfidence against them.

Few expect an unarmed human to be able to do what Jukko does. He’s trained to target weak spots, joints, accessible organs, etc. and break limbs in a relentless, brutal assault.

He also has an incredible level of resistance to pain, fatigue, mental hardship, etc..

Jukko’s power is that he can feel the pain of sentient beings in a 3km radius – or 500 meters when he’s asleep. He cannot shut down this power.

While this would seem crippling, Jukko has an immense capacity for pain. He can take the pain he inflicts on an opponent in combat, even when breaking their limbs and the like. Somebody dying will not affect him if the death is quick, and he has proven able to fight among several painfully wounded persons without apparent ill effects.

In DC Heroes RPG terms, the death of a team-mate will inflict 1 Mental RAP on him – no LDD possible. He is also likely to pass out if exposed to a massive amount of pain by hundreds of people, but this is almost entirely a plot device.

Curiously, destroying an animated corpse makes Jukko’s pain level recede a bit. Team Achilles was thus able to roughly triangulate the location of the reanimator by machinegunning down all zombies in their path as they followed Jukko’s guidance.

Scanning Jukko’s mind means being exposed to what he has endured, including all of the pain. This is a sufficient shock to kill most telepaths.

Since Jukko cannot shut down his empathic ability, he cannot sleep if somebody is experiencing pain within his range. While in Finland, he was living miles from anybody else and had no problems. The situation is very different now that he’s headquartered in New York City.

Jukko has thus taken control of the radius around his apartment in the UN building. All bartenders have been clearly warned he would visit them if any bar brawls happened in their establishment, all child beaters and spouse abusers have been taken down and handed over to the police.

Private security guards have been clearly convinced they shouldn’t even think about beating bums, cancer patients support groups were driven away from the area, etc.

Jukko Hämäläinen is a former member of the Osasto Karhu (“Bear force”). This is a small, 40-persons anti-terrorist elite police force.

In 1956, Finland had started investing heavily in research to develop a superhuman military unit. By the late 1980s, they could get concrete results and the Bear Force was among the first who could volunteer. Jukko didn’t – he was afraid. His brother, his fiancée and others became Finland’s first superhuman group.

It was all for naught, as within months the Soviet Union collapsed. The now useless super-Finns drifted away.

Jukko’s brother Lemminkäinen, a powerful psionicist , had other ideas. He became a politician, and his superhuman empathy made him hugely popular. His speeches resonated with the entire country, and his extreme right-wing opinions triggered a sea change in Finnish politics.

Mr. Hämäläinen became convinced that it was necessary to uplift his entire people to a superhuman level. First, formidable psionic field called the “masking wall” was erected by Pekka Viljo, Jukko’s best friend. From the outside, everything seemed as if it were normal.

But within months, Finland’s government, a thrall to Hämäläinen’s super-willpower, was committing horrors similar to that of the Third Reich. The whole population was herded into superhuman enhancement centers. Millions died, unable to survive the transformation into superhumans.

Hämäläinen was obsessed with augmenting his brother Jukko, so Jukko could see the superhuman glory that would be his.

Jukko, gifted with an incredible willpower, resisted all attempts to make him a superhuman for eight months. He forced his body to reject everything that was tried to enhance him. But after so much time, for a moment Jukko briefly lost his concentration and was turned into a superhuman against his will.

The technology used would scan the subconscious to give subjects the powers they were yearning for. In Jukko’s case, it was the ability to share feelings, as he wanted to expose his brother to all the pain they had inflicted him, to show him what his madness had wrought.

When he touched his brother, they instantly shared their feelings of pain. What Lemminkäinen gave Jukko was negligible, but the feedback incinerated Lemminkäinen.

However, Lemminkäinen, without Jukko realizing it, had a psi-link with every surviving Finn. The entire country shared Jukko’s unimaginable pain, with fatal results. Between the superhuman enhancement camps and the psionic feedback, eight million Finns had been killed in just a few years.

The masking wall was still up. Despite his death, Pekka Viljo still existed as a psionic lifeform. After some time, the less than 2,000 surviving Finns emerged from the graveyard their country had become. They moved to Sweden for medical care, revealing to the world what had happened in Finland.

Over time, the surviving Finns — all of them superhumans of some kind — decided that they would leave the masking wall up. They turned their country into a haven for refugees all over the world. Their only two conditions were learning the Finnish language and not being superhumans.

This meant the Finns themselves would leave. But they a watchful eye on Finland, and crush anybody trying something funny against their superhumans-free haven.

Jukko himself, as a representative of his country highly interested in the control of superhuman threats and with elite SWAT training, joined the United Nation’s new version of StormWatch, Team Achilles, in the early 2000s.

Jukko is a sisukas – a paragon of the traditional Finnish virtue sisu. Sisu is going out in the deadly cold and getting things done no matter what, because they need to be done. With quiet courage, great tenacity and without ever giving up.

He is thus a quiet, stoic man of strength and courage. Having survived incredibly bad things and being very proud of his people’s skills in warfare, he is calmly confident he can take down most opponents, preferably in hand-to-hand combat.

Like Santini, he greatly dislikes any superhuman who thinks of himself as being no longer human. Jukko enjoys breaking those with his bare, human hands. He’s very familiar with the phenomenon where a superhuman stops considering himself as human, and from there soon stops valuing human lives.

Due to the constant pain, Jukko can be dour and short-tempered. But the vast majority of the time, he’s a reliable and articulate man with a quiet, friendly sense of humor.

Hämäläinen has found himself in a relationship with Dr. Grunier, at her initiative, which he seems to enjoy (and they do have a common interest in medicine and healing).

His favourite hang out is a firemen’s bar near the UN. In such a place, his heavily scarred appearance is not as remarkable as elsewhere.

“ Perkele ! “ (usually pronounced “prrr-kl” in a deep voice. This is an old Finnish name for Hell/the Devil, and is best translated as “bloody Hell !!”). A less common swear word he uses is “Voi vittu !” – a particularly rude expletive that more or less translates to “by the fucking cunt !!”.

Weiss, in Jukko’s cabin : “Could you carve me a weapon out of a log ? StormWatch seems to have run out of guns”
Hämäläinen : “Oh, guns, I leave to the professionals.” (gives one of his assault rifles to Weiss from his personal arsenal, takes a huge knife for himself)

“What is your thrice-damned problem ?”

(Calmly facing the Midnighter) “I’ve turned it all off. Your fight analysis computers, your super-strength, gyroscopic balance, rapid healing, double-time nerve induction… all of it. I’ve made you human again. And now I’m going to kick your human ass.”

“I’ve killed worse than you. I’m from Finland.”

Notes:
StormWatch personnel are placed outside their normal chain of command. While on StormWatch duty their Rank Advantage becomes a 0-pts flavour advantage. Rank more or less applies *within* Team Achilles rank, but this is quite looser than in most military units.

Drawbacks:
SPR (empathic pain, as described in the P&A section). 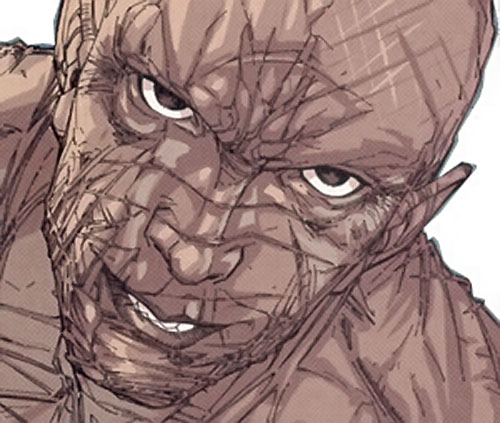